I’m creating this thread because I’m modeling some old buildings from Manhattan and I’ve some doubts, maybe someone can help here. I’ll let some previews of both buildings I’m doing at the moment below.

One of these buildings is The Washington Life Building, which is kind of overlooked by people, not only because it was already demolished 50 years ago, but because it has always been overshadowed by its most famous neighbors, the Singer Building and the City Investing Building.

Well, I was able to model a big part of the building. The problem is that I couldn’t find any picture that showed the facade of the base of the building in the Temple Street - that also ceased to exist along with several buildings around it in the end of the 60’s. I searched in various places, from stocking sites to digital collections of New York museums. I’m starting to think there’s absolutely no record on this, at least on the internet. My last hopes are asking in forums on the internet, maybe someone already knows some information about this. I’d be glad with any information. Thank you if you are still reading 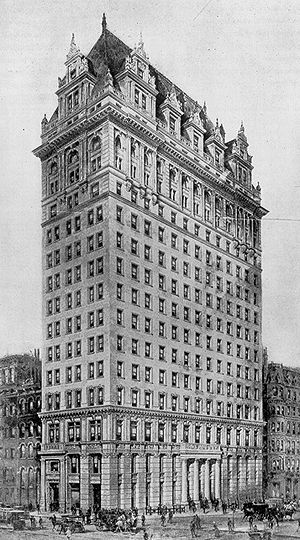 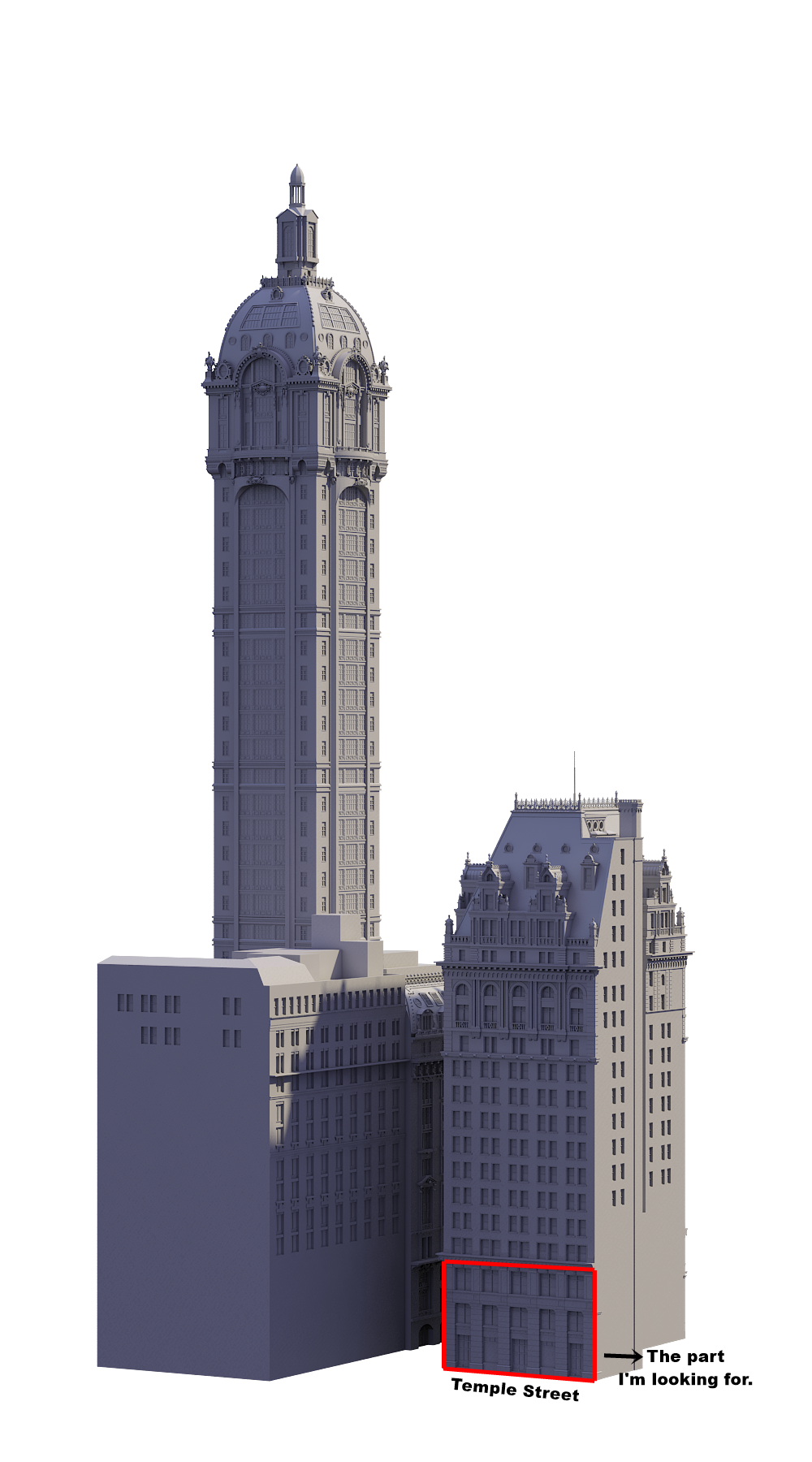 What I modeled in this red area that I look for is a version I made - I actually made it the same as the front facade - in case I do not find the actual one. 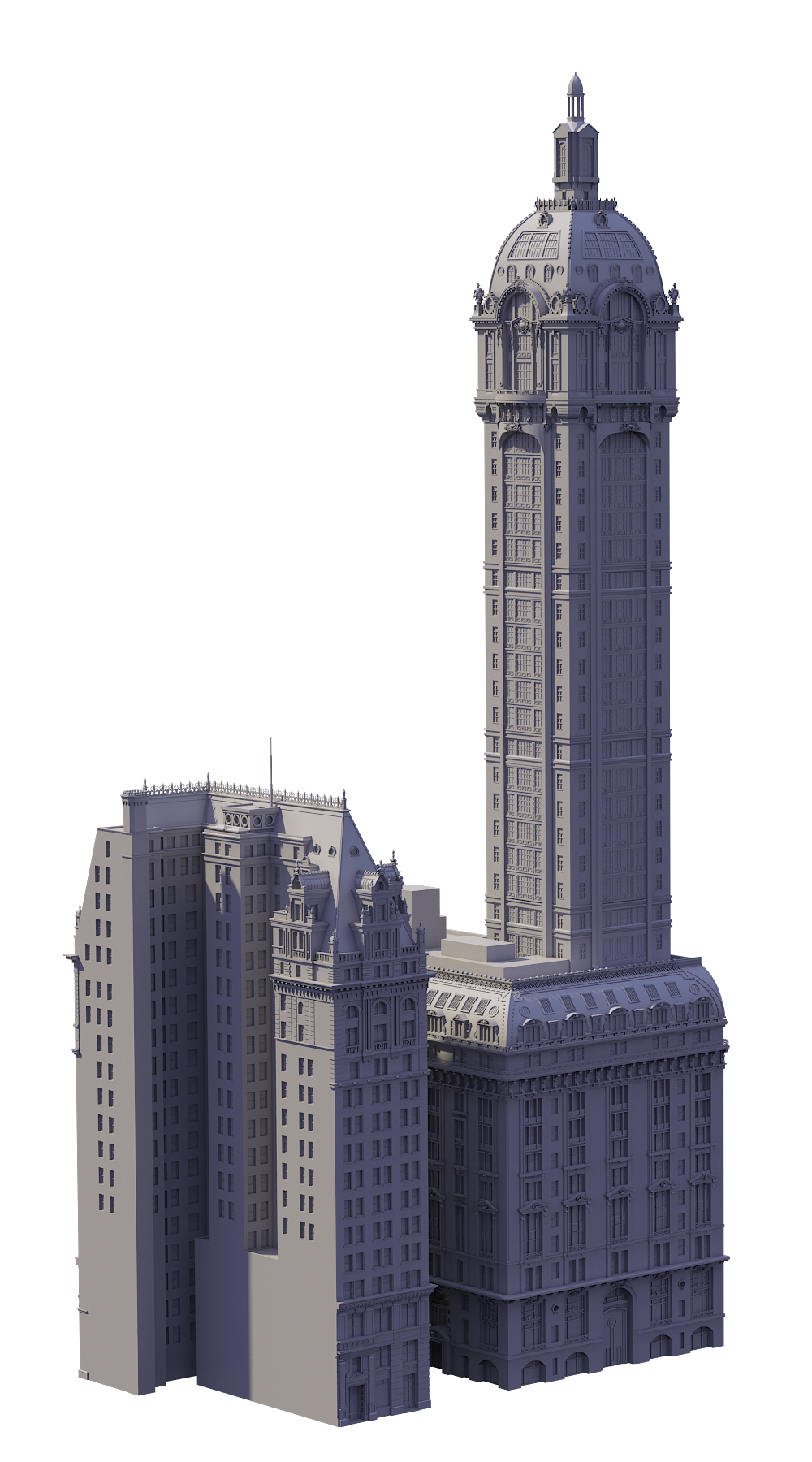 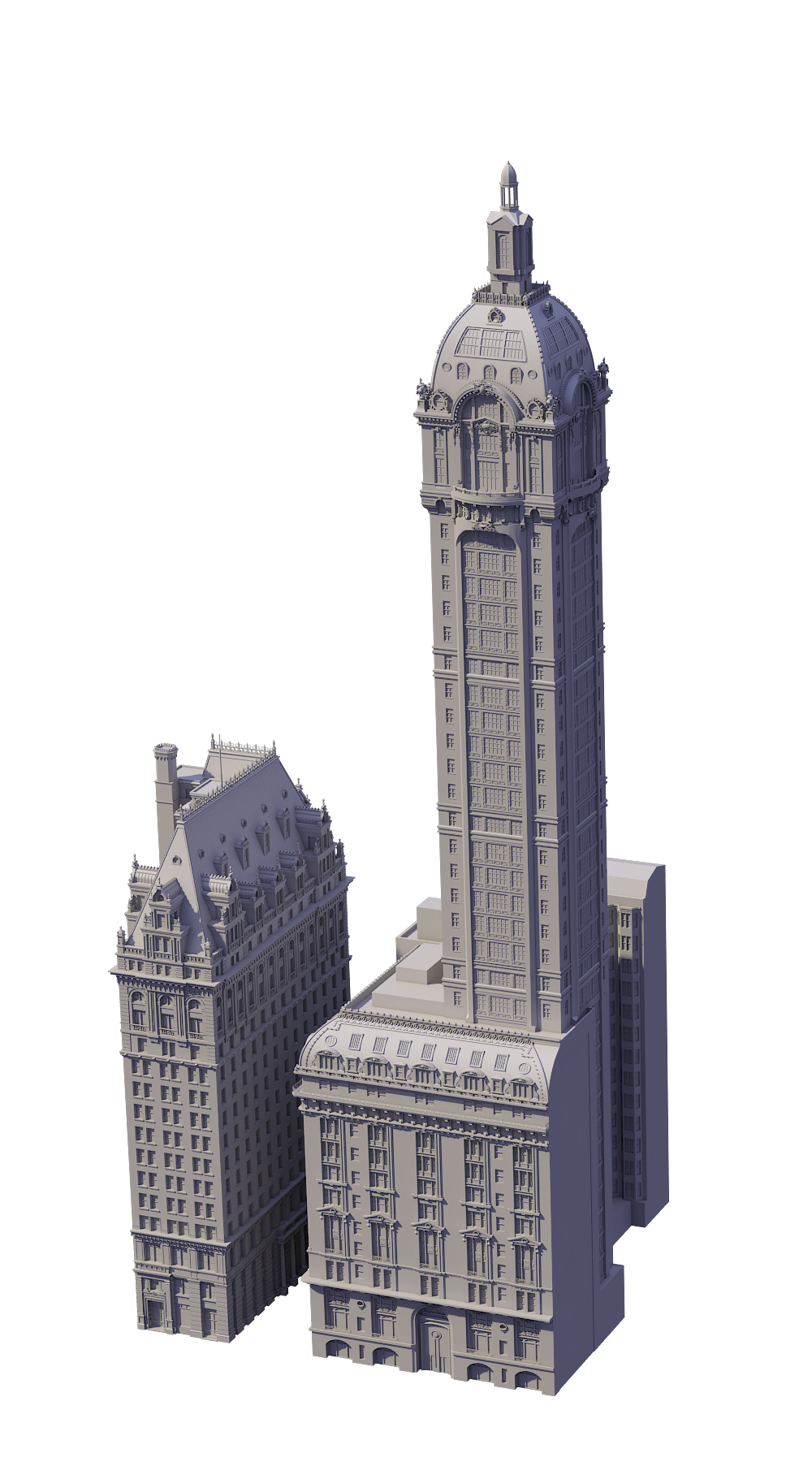 Ps.: when I first started to model the Singer Building, I did it using lots of pictures and other models as references, so lots of things there are wrong, but I’m currently fixing everything doing it as it was in its first years. On the other side, the Washington Life Building is more precise.

The f#$@ were they thinking demolishing this?

I found these from an archive. 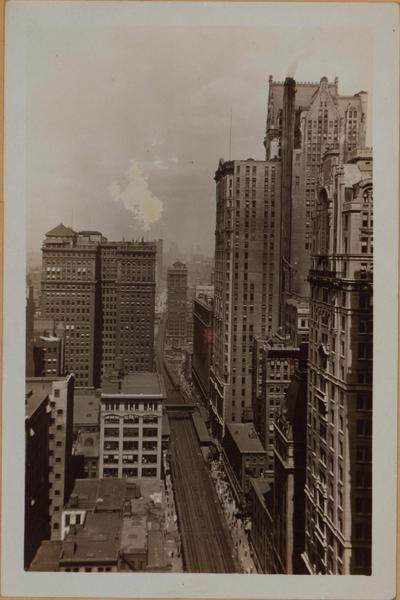 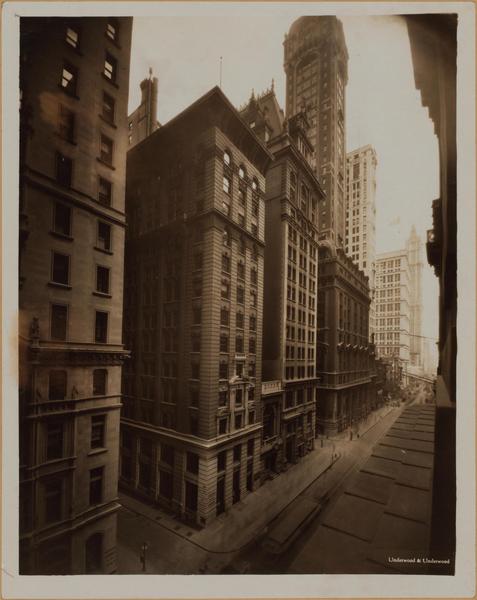 the 19-story Washington Life Insurance Co. Building (No. 141, at the S.W. corner of Liberty Street) 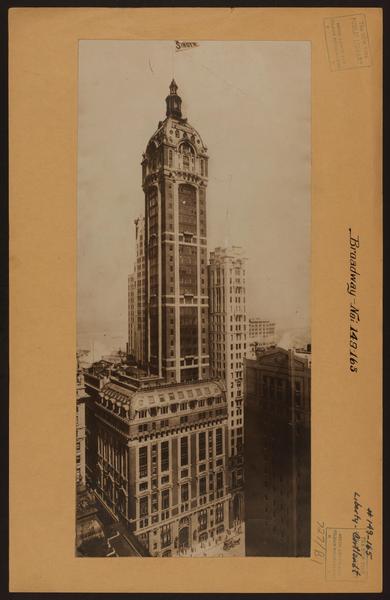 Yeah, that’s sad. Today Zuccotti Park occupies the Washington Life Building area. The Singer Building was demolished to make way for a very ugly building in my opinion, though a lot of people like it.

Thank you very much for those, but unfortunately they don’t show the part of the building I need to model. They were very useful when I was doing other parts in the past.

Ah I see. So from the Temple Street side ( the side corner that is). I was looking at Liberty st side. I’ll see if I can locate it.

Dam this is hard.

I’ll just throw these out.

I wonder if it is just a blank wall as a result of an existing structure there?

Can see even on the left below an existing structure. Unsure of the angle relative to the street. 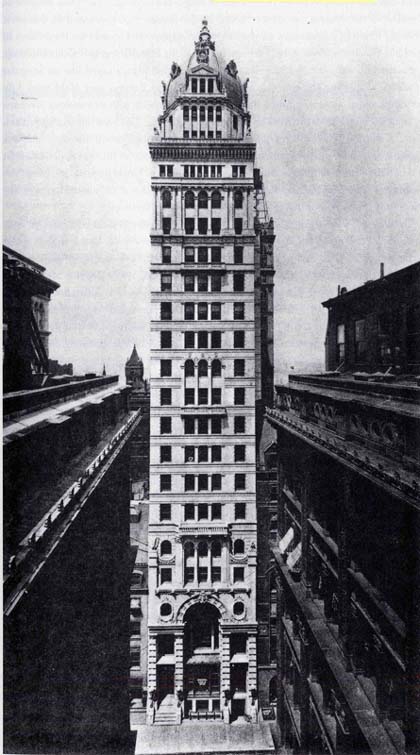 downtown architecture was very cosmopolitan during the early 20th century. You wouldn’t be remiss if you confused it with somewhere in Europe. A shame a lot of it was destroyed, but that’s urban renewal for you.

edit: did a bit of research and added some extra info to the title.

this is what unfortunately took its place. More height and space, but zero character. I gotta go to bed soon, but I’ll see tomorrow if I could dig up that angle. I’m thinking aerials of the singer building might give a clue. A high quality one from the right angle, high res hopefully for zooming in. (given the proximity of Washington Life near it)

I wonder what was around it though. Like if there was an existing midrise somewhere on that side.

Where is google street view 1920 version when you need it.

Ha. You want a sacrilage?

The NY Tribune was demo’d for this.

This gem below was sacrificed for the Pace Tower. O my god, what a sad day in history that must have been. @chris08876 I believe it wasn’t a blank wall because Temple Street was right there, I think it would be really weird, though it’s possible. I even tried to look for some aerial pictures as well, but no good results.
The Tribune Building is also one of my favorites among those that no longer exist. It’s on my to-do list as well.
Regarding other buildings around it, Fidelity & Casualty Building was across the Temple Street.
There was also this other one on Temple St w/ Liberty St I’ve no idea the name (top right): 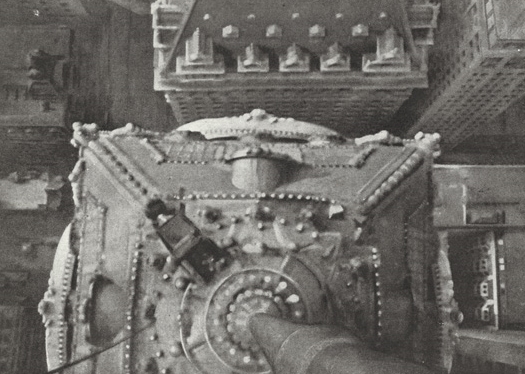 Thank you very much for your effort with this

@YIMHudson I agree with you. That’s progress. Although I think some of those that were demolished could have been preserved.
Funny thing that I found this forum after reading this (take a look at the last paragraph): https://newyorkyimby.com/2012/09/historic-nyc-the-singer-building.html
Thanks for changing the title

These models you made look great. Please feel free to post more of them. Hopefully you find some info or old pics of that portion of the facade you are looking for. The Washington Life Building was awesome. Never knew about it until your post. Thanks for sharing.

@JPSchriefer Do you mind if I ask what software you used to model this? I love the detailing, it’s amazing.

@JC_Heights thank you, I’m happy you like it. Maybe I should create a topic about these recreations later?

BTW there’s a very nice blog about the old days from NYC. It’s in German, but it’s really good: http://nygeschichte.blogspot.com.br/2012/01/buildings-between-washington-life-and.html

@the726 thanks for your comment. I’m using 3ds Max. However some ornaments with complex shapes only look good if viewed further away because they’re some generic pieces I made to simulate the real ones. I’m trying to learn Z-brush at the moment, it’s a very good software to model sculptures. This way I intend to also model the ornaments the way they really were.

Just an update on this ‘mission’. Yesterday I had a good idea, looking for pictures of the WTC construction site - at the same time the Washington Life Building was being demolished - I was able to find a photo showing the extreme left of the building. It was possible to check that my predictions about those first windows were right, but I still need to figure out the rest of that base. 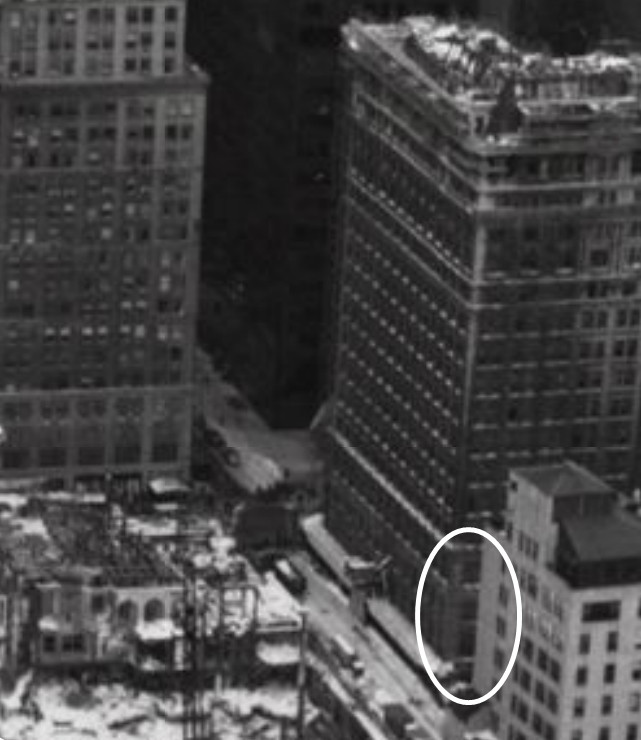 @JPSchriefer Your model seems to be accurate. I have a few bits of info I can share.
1: The building on the corner is the Fidelity Casualty annex building at 92 Liberty St, built in 1910 and destroyed in 1969. I’ll share a few pictures.

I’ll have to post the next few details in extra posts as new users cant post many pictures.

On the same block are the Vanderpoel Estates, 96 & 98 Liberty St, which were tenements.

For the WLB, there are some pictures from the start of demolition here showing the back. You only see one triple bay window at the ground level, but you can see the pink granite windows aligned above. The rest of the lobby is hidden by whats left of the Fidelity annex. 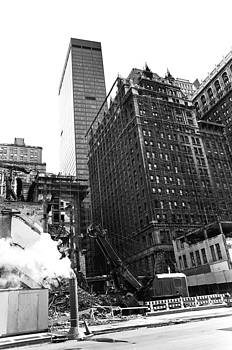 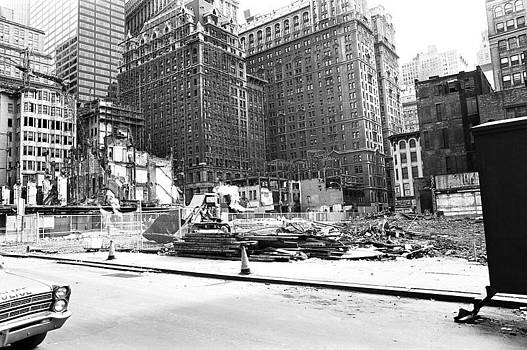 Here you can also see the remains of Singer and Bourne Buildings;

@IhateUSsteel amazing pictures! Thank you very much for those

Now I know the 1st floor is also correct in my model, I just need the ground floor now, although I’m really thinking that’s an impossible mission lol

What I most like in those pics is that I have a Temple Street reference now for the Fidelity & Casualty building and annex, that’s really an important part for my project. Thank you very much again.

Very suggestive username by the way, I like it

No Problem, I’m recreating the city in the year 1954 in Minecraft on console. It’s also a challenging project researching building facades and colors, etc. These 3 blocks have some of my favorite buildings, and it’s weird to think if one tenant had stayed on the top floor of the City Investing Building or Washington Life, it would have corrupted US Steel’s plans and saved all the buildings.

There are a couple tenements next to the Fidelity Buildings, fairly plain but I have screenshots of those too if needed.

Edit: Found this picture on Ten & Taller from 1898. It doesn’t show the ground floor, but shows a good view of the building and also shows the old wing of Fidelity which must have been demolished for the 21 story annex in case you want two alternate Fidelity models.