Oh, that’s great. While looking for pictures for the models I’m doing I was able to find some amazing Minecraft works from different buildings. Do you publish your works somewhere?

Do you have an specific reason for recreating the city in 1954? I decided to recreate mine in 1909-1910 because the Gillender Building was still there and I’d love to model it too, actually I already started it some time ago. Also the Singer Building was in its ‘original’ version, you know, it suffered a lot of modifications some years later.

Regarding to the tenements, I’d love to have the screenshots, since I plan to model the Fidelity & Casualty block soon. I’m almost finished with the Washington Life Bldg block, and it was funny because something happened in the North American Trust Company Bldg almost like you said about the City Investing Blgd. A guy used to have a restaurant at the base of the building, and he didn’t accept any offers to leave the place for a long time. It delayed the construction of the Zuccotti Park for a while.

I saw this picture you posted once and I saved it. It’s beautiful and I saved it for modeling the back parts of Fidelity & Casualty Blgd.

I also like this one, probably you already saw it as well
http://www.shorpy.com/files/images/4a22943a.jpg

Thanks; I did 1954 so that I could have the Battery Tunnel and Highway, yet have most good buildings, as the “shit hit the fan” in 1955, with so many good buildings being destroyed, and it’s good to have that calm before the storm period.
I originally had it in the year 1931 but changed so I could have the Cities Service Building, etc.

I have yet to publish my project, but I’ll upload screens here soon if I can access my better computer.

I once heard about the guy in 135 Broadway, sucks they were still hell-bent on getting rid of it over a decade later.

I have finally managed to collect pics of my map. Theres alot, so it might run on for a couple posts due to the annoying forum post limit.
195 Broadway;

I play around with creative mode as well, so I can appreciate all the work you did here! Seriously, that’s amazing stuff! Can’t wait to see more!

Wonderful recreation! You’re doing an impressive work. I hope to see more from you

Now that Yimby is letting me post (for now) I can send this pic of the Vanderpoel estates on the corner of the fidelity block. both facades for each tenement are nearly identical. the corner tenement is white, the L shaped one is a brick color.

I’ll post a few screens of my WLB and the block because I finally found the pics.
Singer and Washington Life:

If there are any other buildings you want to see in that part of downtown theres a chance I have it if you ask to see it.

I’m still searching my self for a good view of Temple and the back of 141BW, but haven’t found anything yet. Found this a while ago though; good view of Washington and North American, as well as the Fidelity buildings from a rare view. Singer and City Investing are under demolition.

Here’s a fairly common shot of the base circa 1948. The lobby modification happened sometime in the 30s, I believe 1938.

There’s a movie from 1951 called ‘Fourteen Hours.’ It takes place across the street at 128 Broadway, and the Washington Life Building & singer building appear in the background. Some characters are also shown inside 115 Broadway and on the roof of the North American Building.
Thought I’d post it as I love the movie and it’s fairly topical.

Wow this movie is very helpful and it looks interesting, although I’m not a big fan of old movies, I’ll try to watch it later!

There’s also this other one where we can see the Singer, Washington Life, City Investing, US Realty and Fidelity & Casualty Buildings - its annex actually. It’s around 25 to 33 minutes.

Nice film there; Looks like they’re on the townhouses where 130 Liberty later stood.

This is mostly related but since we were on the subject of it earlier, here’s 2 photos of Singer’s cupola being modernized and the flagpole & balconies being removed; the set in windows on the curved roof were reconstructed between 1937 and 1942.
Circa 1947:

Another conveniently sad thing; Apparently amidst filming 14 Hours, in 1950, a man committed suicide by jumping from the Washington Life Building and landing on Temple Street. One of few things to let the street make headlines.

It’s been a long time, but I found these and this topic was on exactly this part of the building, so I thought I’d provide some more reassurance. 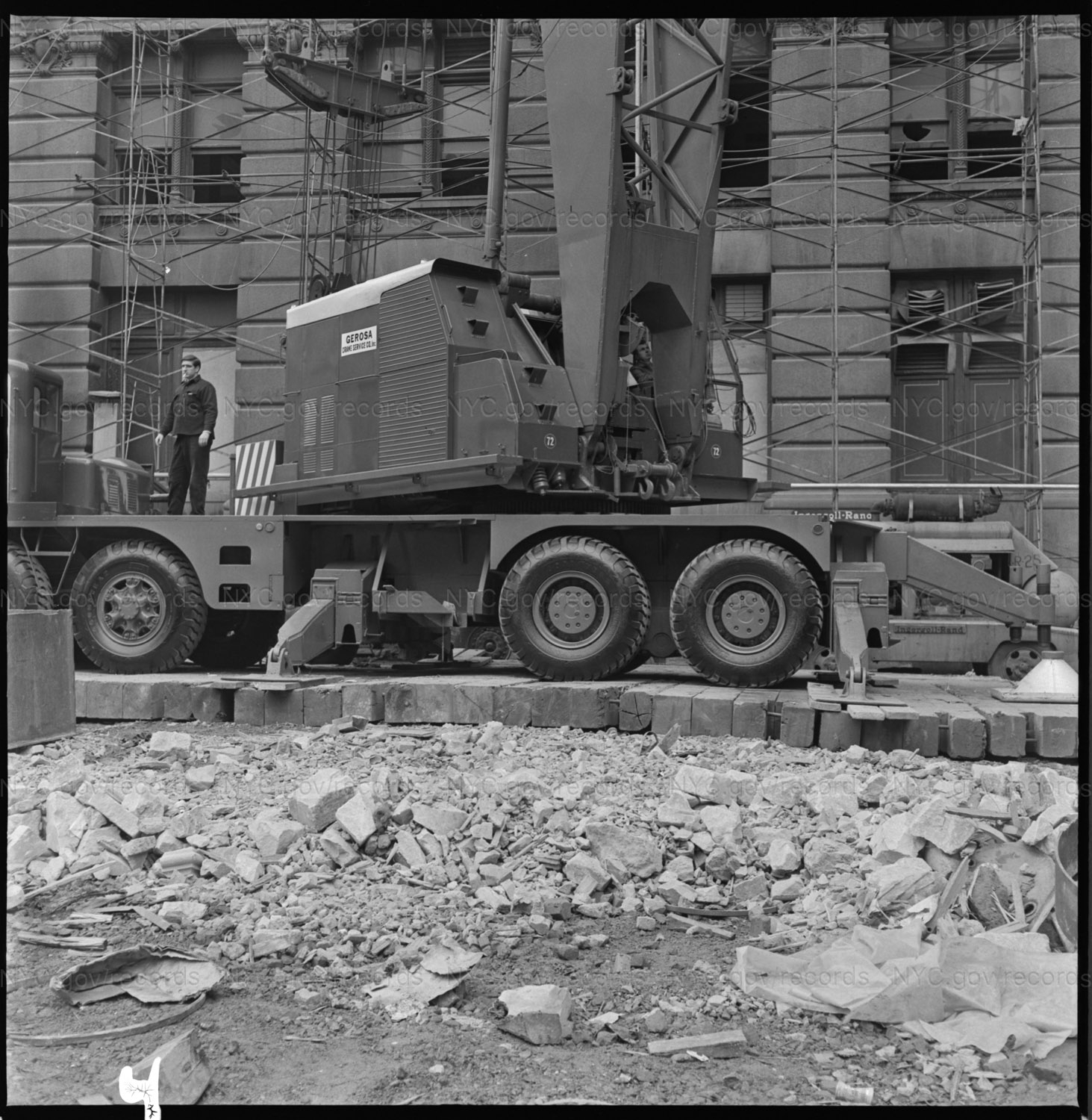 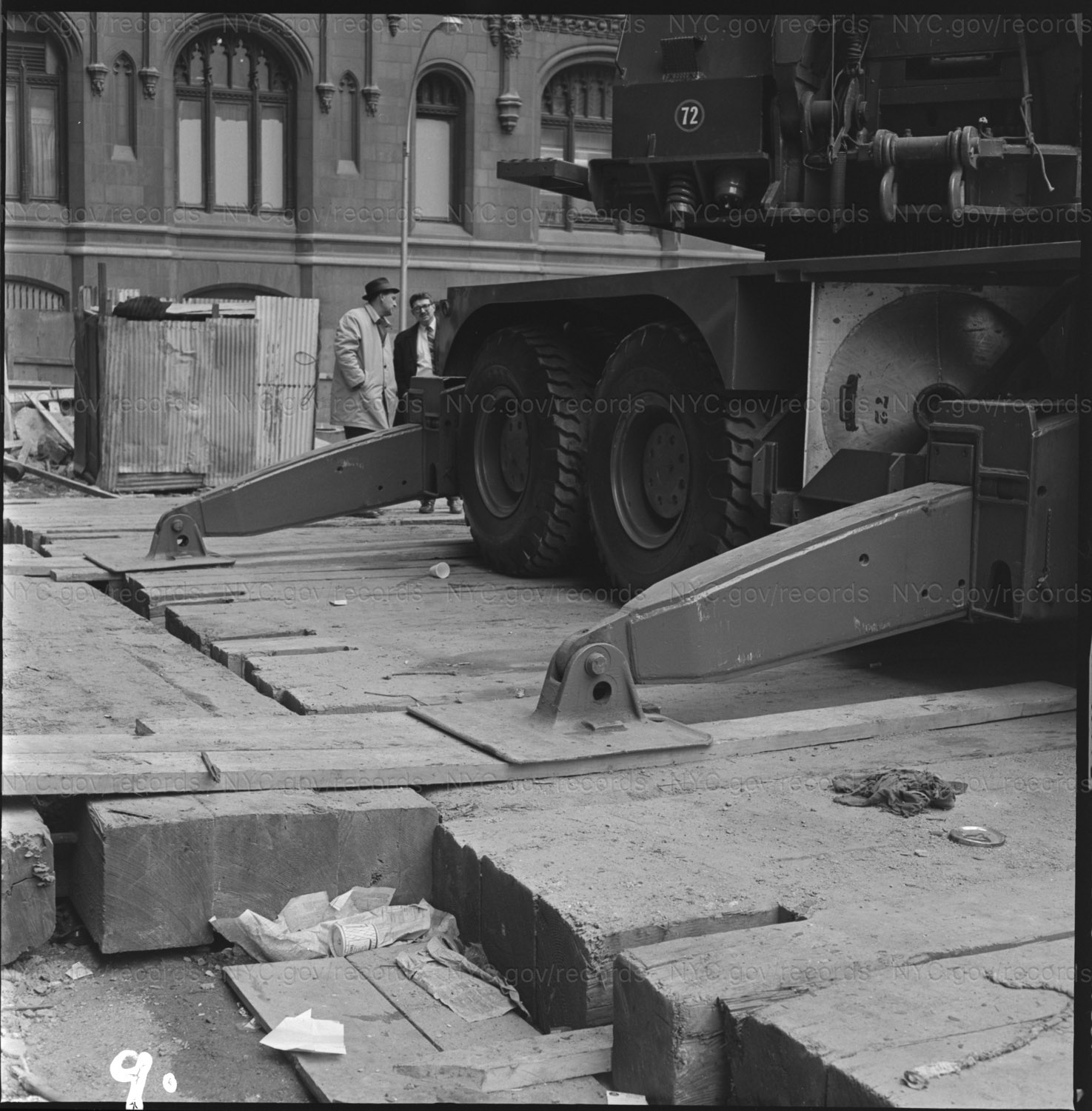 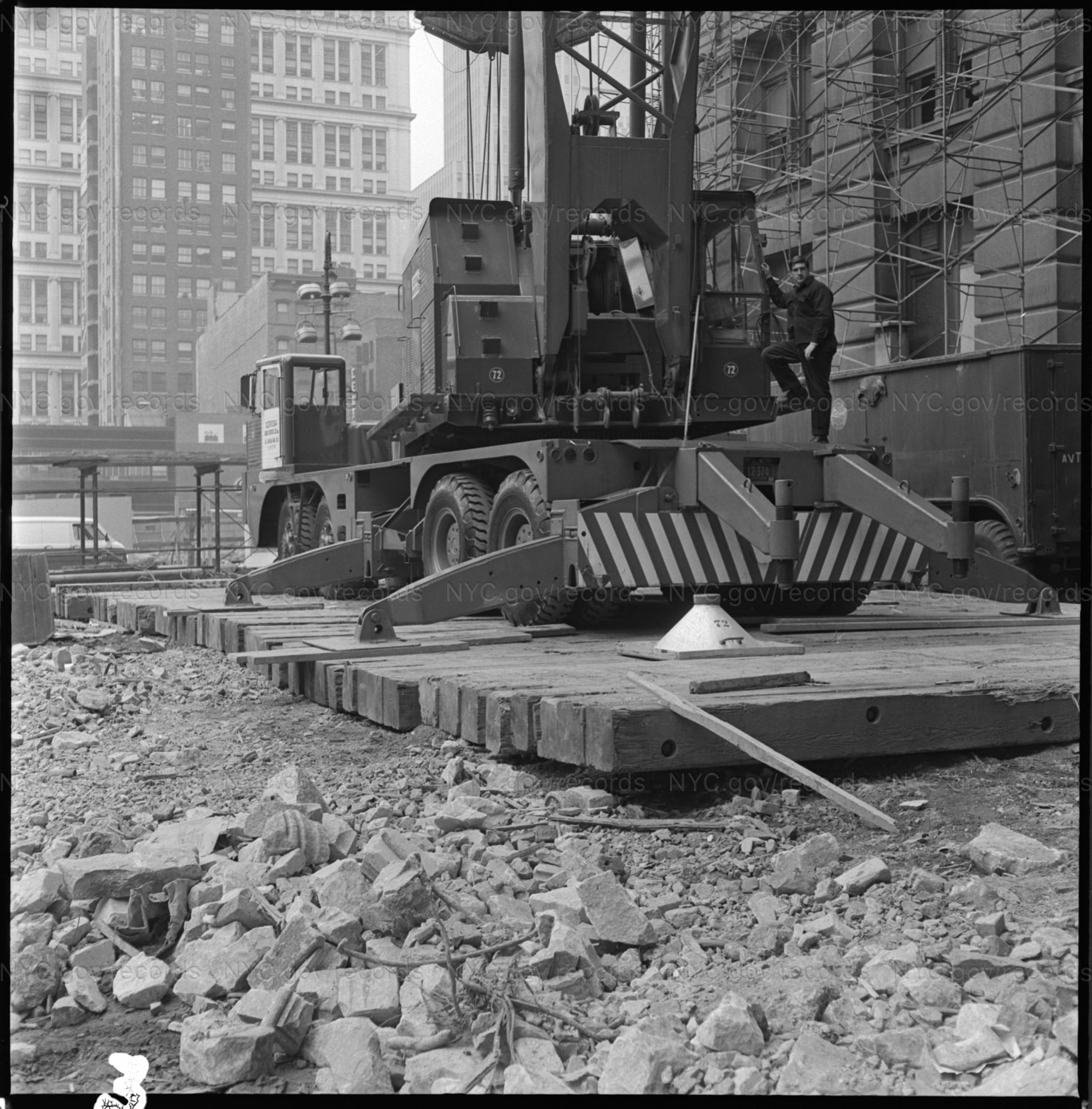 March 20 1969, just 20 days after the full on removal of the Singer Building, on the site of 92 Liberty Street. Trinity Buildings to the south, Washington Life to the east, recently demolished Gillespie Building to the far north.

OMG this is SO amazing! I’ve been looking for this part of the WLB for almost two years!
One year ago I discovered this forum by accident when I came here to check some news about 270 Park Avenue demolition and decided to create this thread, and now I finally have a wonderful reference.

Thank you very much! Now IloveIhateUSsteel

Haha no problem. This helps me a lot too: reassurance that I haven’t majorly screwed up.

My hopes is that one day an interior picture will come along somewhere. I’d love to put interior on this building on my project, as well as it’s neighbors to the west.

Construction Photos:
“Views of the Washington Life Building in Process of Construction from May 1st 1897 to May 1st 1898” photographs by F.E. Parshley of Brooklyn.

I didn’t update these models yet because, just like what happened with the Singer Building, I decided to remodel them following more accurate measures and angles. Since my first intention doing these buildings was to add them to SimCity 4, I was modeling them in a way they would fit the game - basically using right angles. However it started to bother me when I noticed the North American Trust Company building was almost 2 meters extra in its length due to the wrong angles of the WLB and I decided to remake them in the most realistic way I can.

Just a comparison between how the WLB angles were in the first model and how they’re looking now: