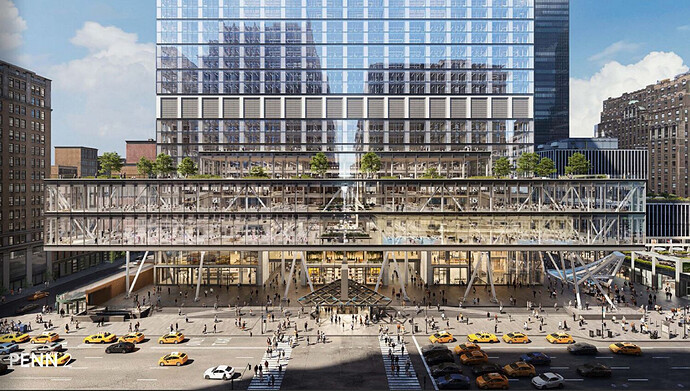 Renovation work is continuing on PENN2, a 31-story office building from MdeAS Architects and Vornado at Two Penn Plaza in the Penn District of Midtown. 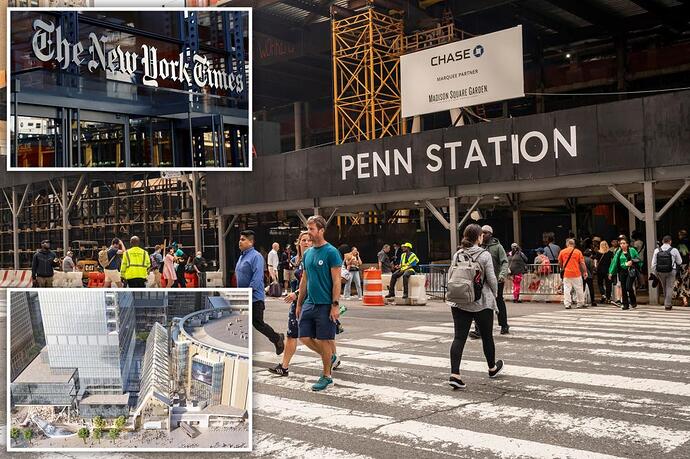 As I wrote in 2010, such omissions by the Times smack not of amnesia, but “of a willful strategy to keep its readers in the dark.”

Can you or @ThreeWentDown do a rendering with the future ESC site? 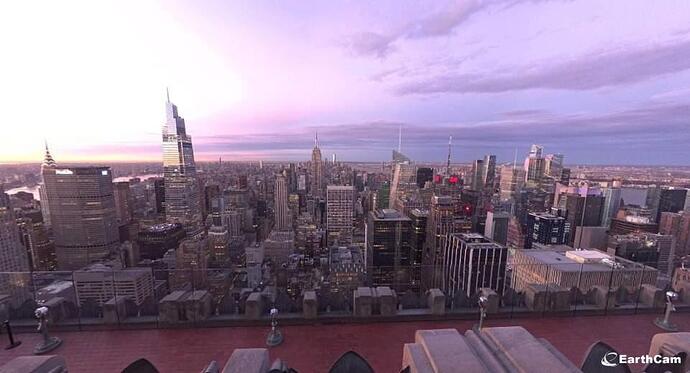 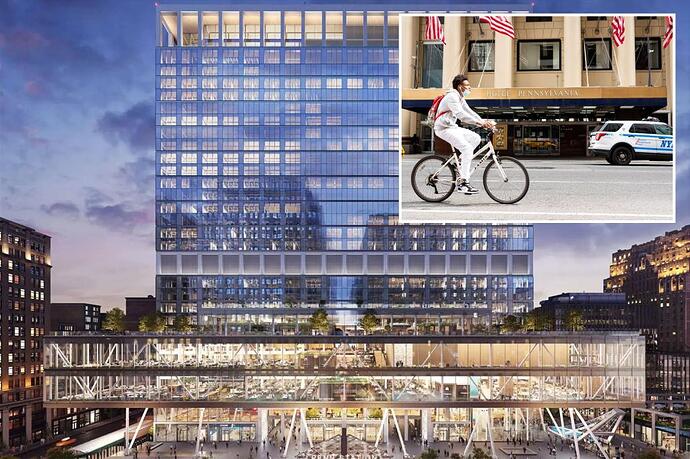 Vornado Realty Trust is poised to join the city’s Great Casino Sweepstakes by rolling the dice on a gambling den near Madison Square Garden, The Post has learned.

A casino near Penn Station might alter the chemistry of a district which Hochul and Vornado have touted as a promised land for new, state-of-the-art offices. But Roth threw a damper on the state’s plan last month when he told investors the time wasn’t right for new, ground-up development.

Roth’s off-the-cuff remarks were said to have stunned the Empire State Development agency, which is in charge of the project.

As The Post reported, Hochul’s recent state-of-the-state speech made no mention of the ambitious, controversial project, which might cost $306 billion to complete over 20 years.

More surprising, it didn’t appear either in the governor’s 267-page “Achieving the New York Dream” agenda, released in conjunction with her speech, which touted 147 “bold initiatives” for the state.

Now this is interesting

Agreed. Even without an official proposal Vornado’s site has the most potential of the options so far. They just left the S&P 500 and need a win badly.

Yeah, the proposal would be for the Penn 15 site.

Though there isn’t a deal yet, I’m not too sure of this in general. This lot is one of if not the most important of Vornado’s potential developments, and building a casino on it would potentially decrease the size of the project. As I understand it, there’s only mention of the casino and not a general resort like all the other potential sites/proposals, though I would assume that there would also be a resort in this instance. But if it were to be mixed used with a tower that is office and hotel with a casino is kind of bizarre. I couldn’t see it purely being a hotel and casino, which would make the development’s size much smaller. This tower is already designed and may have already started the CD phase, even though Vornado is unsure of things this year planning a whole new development would take more time and the site would end up sitting vacant until that time that things are ready. It may be in an extremely well provided area for transit, but I dont think that’s a good argument because so are several of the other sites.

The article also mentioned that Silverstein could be joining in on the bids at his former Mercedes-Benz lot on 11 Ave as well.

I still think the TS SLGreen and Caeser’s partnership is the best proposal and then the HY’s one.

I still think the TS SLGreen and Caeser’s partnership is the best proposal and then the HY’s one.

Anyone else out there think nothing is gonna happen with this area for like a decade?

but on Park Ave. arise a few that’s enough.

I disagree. There’s huge demand for space — just not in this area. This immediate area is plagued by two large and disgusting parcels. The one just north of the Hotel Penn and the hideous one-story eyesore on the west side of 7th between 33rd and 34th. Vornado should redevelop those sites with housing and hotels now in order to start cleaning up the area.

Vornado should redevelop those sites with housing and hotels now in order to start cleaning up the area.

But why redevelop the sites individually when they already plan to build single towers on each site. Vornado can’t necessarily just start demolishing the smaller existing buildings and then build small developments, that would disrupt their already set in place plans to demolish whole blocks to replace with singular towers for each block (Sites/Towers 5 and 6 respectively to the lots with ugly buildings you are suggesting to demolish now). I do understand what you’re saying in general, but it doesn’t really make sense from a development perspective.

It is going to be decades until there’s demand for 10m sf in this pit. By redeveloping as hotels and residential now, they can improve the area immediately.

The engine driving this is money. Improvement is a distant second consideration.

I’ll say in this decade I could expect possibly the smaller buildings planned, but overall I have a feeling not much will happen. Definitely could get downsized like many mega projects

Now that East Side Access is rolling along I think the concentration will be for Grand Central district. People prefer to be over there.