I want a general thread for all things NYC underground. Whether that be transit related or otherwise. I’m gonna go through current or proposed projects on the forum, see if they have something of the sort (subways connection, underground walking connection, train hall, etc.) and then repost them to this forum.

The recent Penn Station announcement. Governor Hochul Unveils Commuter-First Vision for Penn Station and Revitalized Surrounding Neighborhood
Specifically stuff about underground.
-Creates underground loading/unloading for MSG, taking trucks off the street. (though the renderings shows a semi near the entrace?)

New, World-Class Train Facility (some parts of this may be above ground)
-Creates a single level, double-height train hall that doubles passenger circulation space on the new public level from approximately 123,000 square feet to approximately 250,000 square feet and eliminates the congested, cramped and crowded passageways in existing Penn Station.
-Includes a 450-foot long sunlit train hall that is the size of Moynihan’s and Grand Central’s halls combined
-Simplifies navigation
-Creates clear sight lines to exits and entrances
Adds 18 more escalators or stairs and 11 more elevators to platforms

175 Park Avenue
175 Park Avenue is also planned to include major renovations to the subterranean Grand Central subway station that include the following: the removal of several large steel girders to enhance circulation efficiency to the subway platforms, replaced by new structural members on the perimeter of the lot and around the station; relocated subway turnstiles from the mezzanine level to the train hall at street level; a 12,000-square-foot below-grade passageway linking the East Side Access Terminal’s Long Island Railroad tracks under Kohn Pedersen Fox’s One Vanderbilt and the Metro-North platforms to the subway mezzanine floor; and 5,400 square feet of new space to the 42nd Street Passage with new signage, train arrival boards, and ticket machines.

The converging steel columns will fan outward from two pairs of massive foundation blocks that transfer the immense loads of the building to the ground.

Above ground will be a 22,000-square-foot wrap-around public outdoor space above the sidewalks that will also connect to the abutting Park Avenue Viaduct, as well as a reflecting pool, public seating spaces, two cafes, outdoor art pieces, and two ADA-compliant elevators connecting from the street to the subways

According to a drafted Environmental Impact Statement released this summer, the building will also offer pedestrian access to Grand Central Terminal and the LIRR East Side Access concourse, currently in the works.

Renderings have been revealed for a 40-story tower designed by Skidmore Owings & Merrill at 415 Madison Avenue in Midtown East, Manhattan.

Of the 343,100 square feet, an estimated 323,500 square feet would be above grade and approximately 19,600 square feet below grade space to be used for a Long island Rail Road (LIRR) concourse as part of the East Side Access project, which will connect the LIRR to Grand Central Terminal and a passageway to the Metro-North Railroad (MNR) lines. According to an agreement with the MTA, the developer must also construct an entrance leading to the below-grade LIRR concourse and MNR passageway on the ground floor of the Proposed Development along East 48th Street.

We love to discover secret tunnels and hidden passageways here at Untapped New York, so we were excited to hear of the re-opening of a long-shuttered tunnel connecting Grand Central […]

Not part of this article, but pics of the entrances.

About to go do something. Anyone that wants to add is welcome! Especially for lesser known things.

Okay I’m back. Here’s one of the bigger projects. Due around October next year. Info is a bit old now, but whatevs. 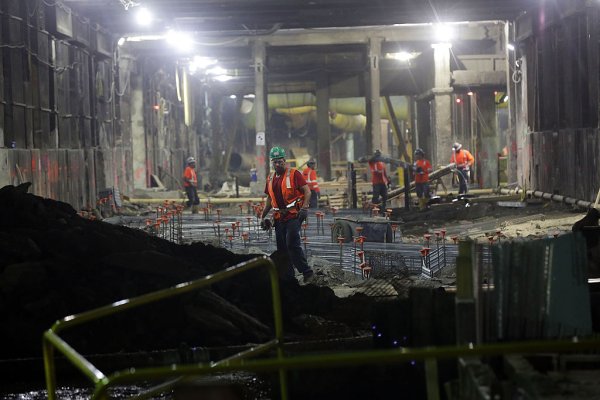 Major Construction of East Side Access Completed; Grand Opening Set for Next...

All major construction of the East Side Access project is complete — with the grand opening taking place next year, Gov. Andrew Cuomo announced Thursday. “We still have some systems work to do — electrical systems, etc. — but all the construction is...

Urban explorer Steve Duncan goes underground, examining the hidden infrastructure of major cities all over the world: their tunnels, subways and sewers. Late in 2010, NPR's Jacki Lyden joined Duncan and a group of subterranean adventurers in New...

The new passageways under 175 Park. I couldn’t find these pics earlier but here they are.

See inside the secret train track hidden in the depths of Grand Central...

The history behind Grand Central's Track 61 and a secret elevator that brought FDR up to the Waldorf Astoria Hotel.

Are There Really Tunnels Under New York City? This Is What We Know

New York City's underground tunnels have been the subject of debate for decades, and, as it turns out, some of them really do exist.

There are hidden tunnels everywhere in NYC, and these are just 10 of the most fascinating

Gov. Kathy Hochul on Sunday rode the first passenger LIRR train into the new concourse at the Midtown East transit hub and gave the public a first look at the terminal.

This $6M Brooklyn Heights house has historic interiors and a ‘secret’ subway tunnel next door | 6sqft
Next door at number 58 is one of 6sqft’s previously featured “underground and secret NYC attractions,” in the form of a concealed New York City subway vent.

It's a historic townhouse, but 58 Joralemon is also a secret subway exit and...

This Greek Revival Townhouse was built in 1847 as a private one-family residence, but now it could save your life if there's ever trouble in the subway tunnel below.

Both of these for Penn 15 which should have amazing underground connections, hopefully rivaling the quality of 1 Vanderbilts connections

Unfortunately couldn’t seem to find renderings of any such connections (like there are for 1 Vandy and 175 Park) don’t know if that’s just me or if they just don’t exist.