For over fifteen years, MAS has been working with city, state, corporate and civic partners to advocate for the transformation of the Farley Post Office into Moynihan Station. The central goal of the project is to help alleviate pedestrian congestion at Penn Station by allowing passengers to access Amtrak, New Jersey Transit and Long Island Railroad trains at a farther west entrance located at the Farley Post Office. This in turn would make Midtown Manhattan, the largest central business district in the United States, more welcoming to New Yorkers and out-of-towners alike, while also encouraging train travel from New York City throughout the country.

It was in the late 1990s that MAS became engaged in the Moynihan Station development project. At the suggestion of the late New York State Senator Daniel Patrick Moynihan, MAS produced a vision for the full conversion of the Farley Post Office into a train station and civic center. With the unveiling of this vision, MAS became a leading organization in a larger consortium of civic organizations working to transform the Farley Post Office into Moynihan Station.

In 2008, upon news that Madison Square Garden was not going to move into the Western Annex of the Farley Post Office, the project was rethought and divided into three phases. Phase 1 primarily involves creating points of entry and exit from the Farley Post Office to the tracks that run below it from Penn Station (see MSDC June 2010 General Project Plan). Phase 2 consists of the restoration and design of the main train hall. Phase 3 includes the development of the Western Annex as a public space. In 2008, as a shovel ready project, Phase 1 was deemed eligible for federal stimulus funding from the Transportation Investment Generating Economic Recovery (TIGER) grant.

In September 2009, Amtrak announced its intention to move the majority of its operations into Moynihan Station. This announcement created great momentum for the project, and in February 2010, Moynihan Station received $83.3 million in TIGER federal stimulus funds to begin construction on Phase 1.

With the completion of Phase 1, individuals will be able to access Amtrak, New Jersey Transit and Long Island Rail Road trains through entrances at the Farley Post Office. This will alleviate passenger congestion in Penn Station and its surrounding streets. Specific work that is to be completed as part of Phase 1 includes:

Points of access to eight additional tracks currently not served by Penn Station.

The development of nineteen vertical access points (stairs, escalators and elevators) to and from the train tracks below the Farley Post Office.

Improved connections from Farley to the 8th Avenue (A/C/E) Subway and Penn Station. 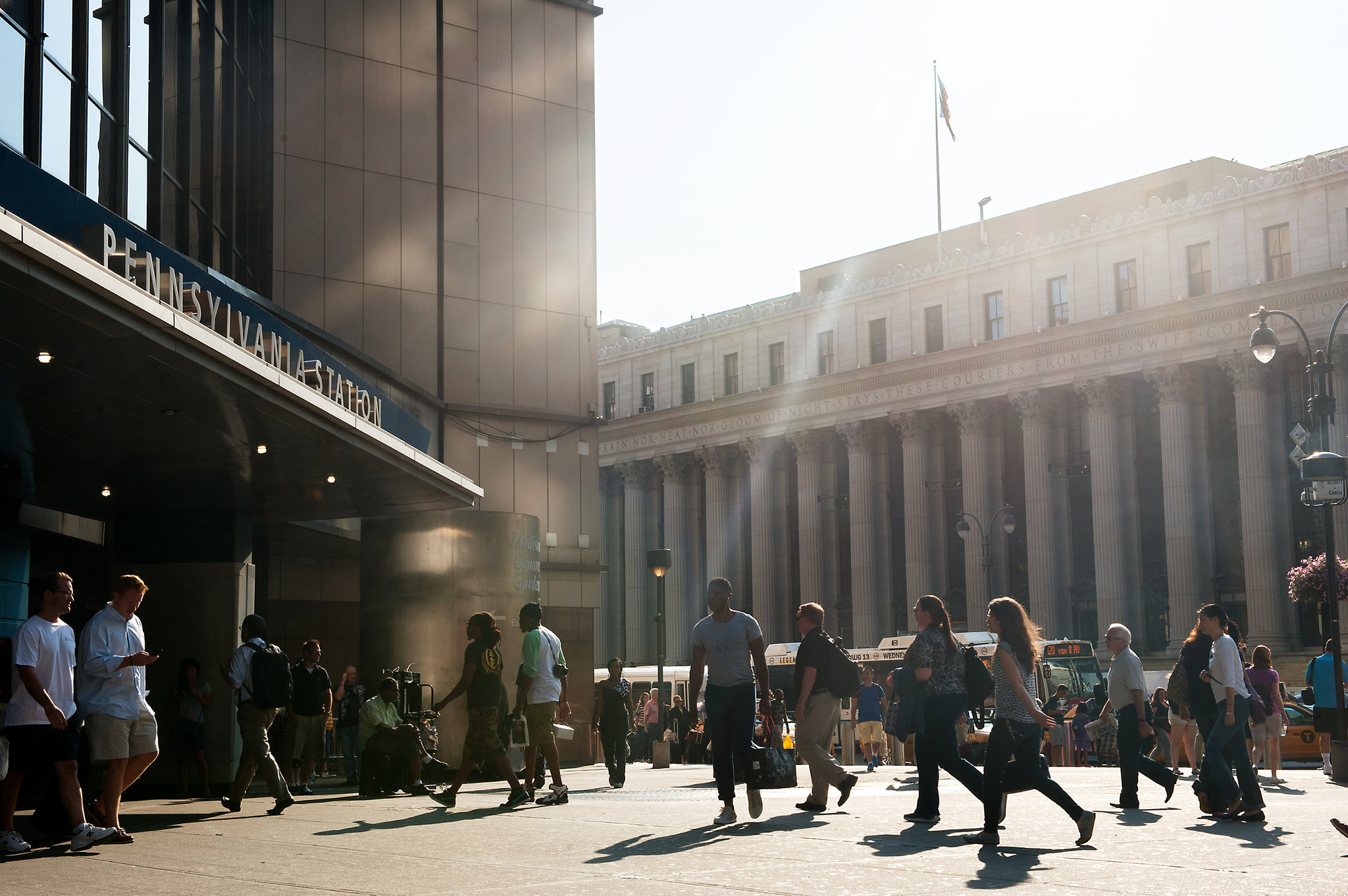 Long a favorite project of civic organizations, developers and politicians, a $1 billion proposal to create a grand annex to Pennsylvania Station, North America’s busiest transit hub, has often moved like a creaky locomotive since it was conceived nearly 25 years ago.

But now the work needed to convert the James A. Farley Post Office, across Eighth Avenue from Penn Station, into a vast and elegant terminal annex in Midtown Manhattan is making modest progress.

One small step nearing completion is the enlargement of the existing concourses serving the train platforms below the blocklong post office and the expansion of a passageway beneath Eighth Avenue to Penn Station.

The train tracks that run into Penn Station extend below the post office and into the rail yards on the Far West Side.

Proponents of Moynihan Station seek to relieve some of the overcrowding and confusion of the below-ground passageways connecting two commuter railroads and two subway lines at Penn Station, which serves about 600,000 commuters a day.

Under the proposal, Amtrak would move its ticketing, baggage operations and offices to the Farley building. It would also allow office workers to walk underground from Seventh Avenue to Ninth Avenue and the new office towers rising on the West Side.

The state’s Moynihan Station Development Corporation is overseeing the $300 million first phase of the project, which is expected to be completed next year. That work includes installing an emergency ventilation system and new entrances at the corners of Eighth Avenue and 31st and 33rd Streets.

But state officials have a $700 million construction budget for building the train hall, where postal workers once sorted mail, and retail spaces. The hall would be roughly the same size as the great hall in Grand Central Terminal.

“Moynihan Station is a model public-private partnership and we welcome efforts to obtain funding for it,” said Gerardo Russo, a spokesman for the development authority.

Mr. Schumer said that the development corporation had pledges for $500 million, from the city and two developers chosen in 2005 to create the Moynihan transit hub. That leaves a $200 million shortfall, which Mr. Schumer said should be filled by federal funds. 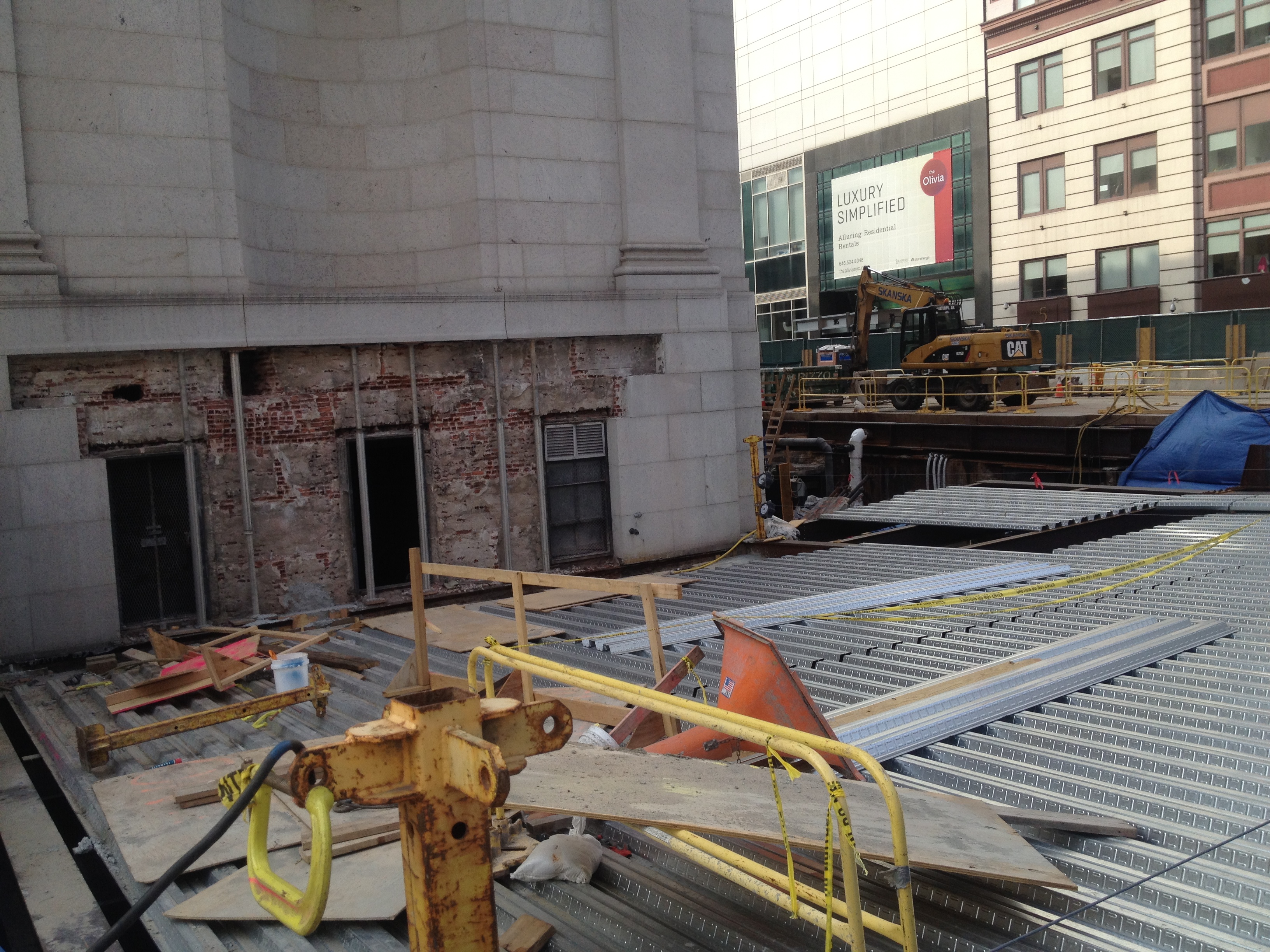 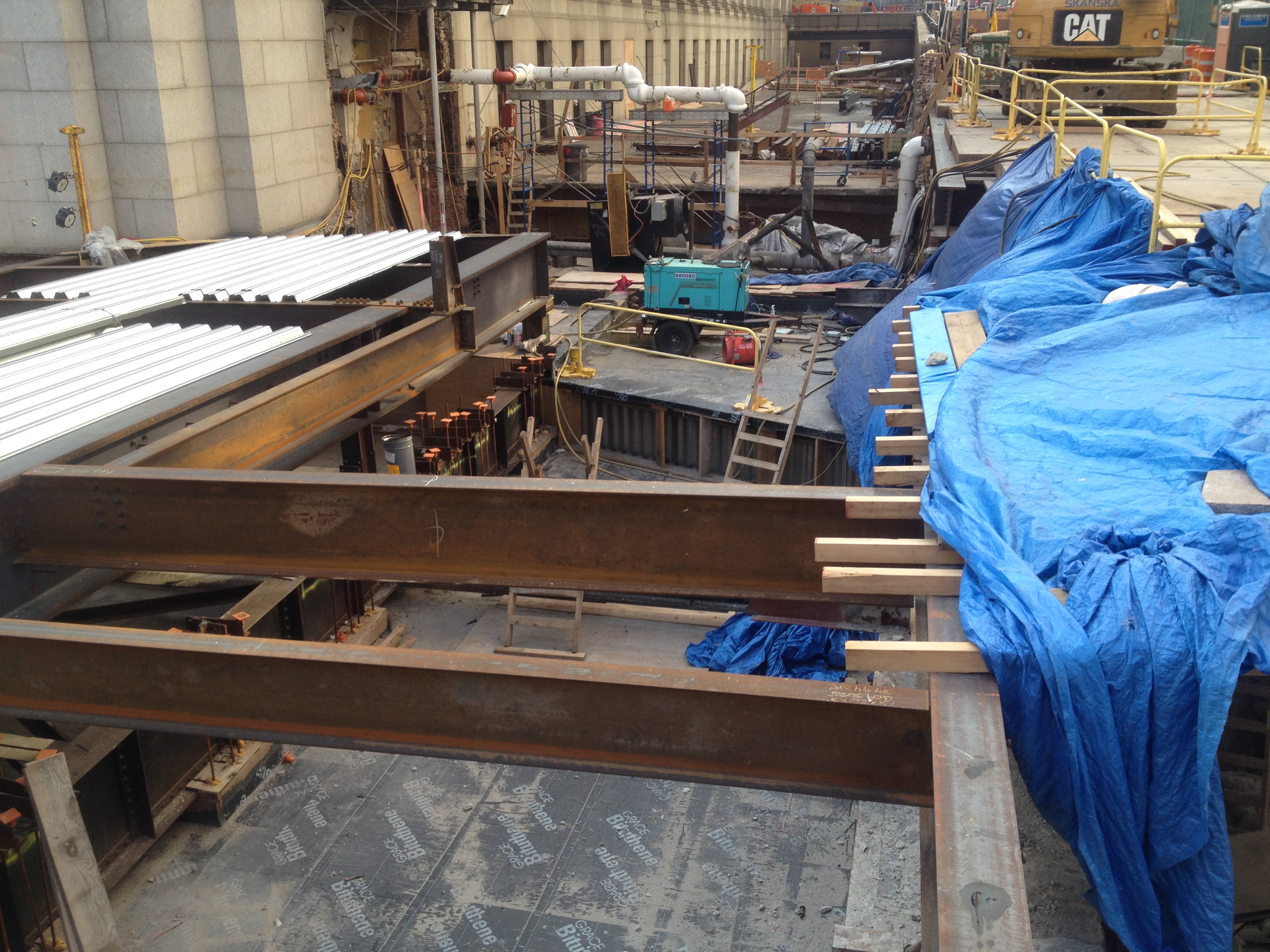 A Late Arrival, Yes, But Moynihan Station Construction Is On Track

http://1v9vs2crct23kkf8ttrqsixx.wpengine.netdna-cdn.com/wp-content/uploads/2014/12/Dec4_Moyn_Sign.jpg
Photos by Scott Stiffler – Several mesh signs on Eighth Ave. announce the completion date of Phase 1, and allow passersby a view of the construction.

BY RAANAN GEBERER | Take a walk past the James A. Farley Post Office on Eighth Ave., between 31st and 33rd Sts., and you’ll see evidence that — after years of planning — the Moynihan Station project is finally under way, and poised to give Penn Station a grand new entrance.

The northern half of the front steps have been cordoned off. Two cranes are positioned near the 33rd St. side. On the building’s northeastern side, a small staircase leading to the street has been removed. On several recent visits, cement was being poured for a street-level walkway that will lead to one of the new entrances and construction workers were operating jackhammers, Caterpillar vehicles and cranes. Along Eighth Ave., the mesh barriers display renderings showing what the building will look like when the project is finished (Phase 1 Opening 2016 | esd.ny.gov/moynihan), and white mesh barriers along the length of the steps announce that the work is being done by the huge construction firm, Skanska USA.

“We’re installing a new skeleton [below street level],” one worker told this reporter. “All new steel!”

After the venerable Penn Station building was razed in the 1960s and replaced with the current, humdrum underground terminal, preservationists periodically called for a more fitting station that would echo the grandeur of the original structure.

http://1v9vs2crct23kkf8ttrqsixx.wpengine.netdna-cdn.com/wp-content/uploads/2014/12/Dec4_Moyn_31Insert.jpg
Below Photo: A sign links the Moynihan Station project to economic stimulus funds. Above photo: A view from the opposite side.

…Amtrak — one of three entities that uses Penn Station (the others are NJTransit and the Long Island Rail Road) — will move its ticket counters, offices, baggage handling and waiting room there, along with direct access to platforms and retail amenities.

“This will take about 30 percent of the traffic out of [the current] Penn Station, and leave room to make improvements there,” says Breen. “Right now, Penn Station is so packed that you can’t do anything there.”

And that’s not all. “Moynihan Station is the future home of Amtrak’s operations,” says Craig Schulz, a spokesman for Amtrak. It fits, since, as Schultz says, Penn Station is “the busiest train station in the nation.”

The work that is going on now is part of Phase I of the project. According to Schulz and a spokesperson for the Empire State Development Corp. (ESDC), this includes:

• Expanding the terminal’s West End Concourse, which currently serves the Long Island Rail Road’s platforms (Platforms 7 to 11), to also connect to Platforms 3 to 10. It will “serve all Amtrak trains after 2016.”

• Expanding an existing underground corridor between the Farley Building and the existing Penn Station.

• Building new entrances into the West End Concourse through the 31st and 33rd St. corners of the Farley Building, as well as improvement of subway entrances to accommodate increased pedestrian traffic.

• Adding elevators to the concourse to make it ADA-compliant.

• Installation of an emergency ventilation system.

http://1v9vs2crct23kkf8ttrqsixx.wpengine.netdna-cdn.com/wp-content/uploads/2014/12/Dec4_Moyn_33Insert.jpg
A barrier erected by Skanska USA encloses the northern end of the construction site. Above photo: A view from inside. 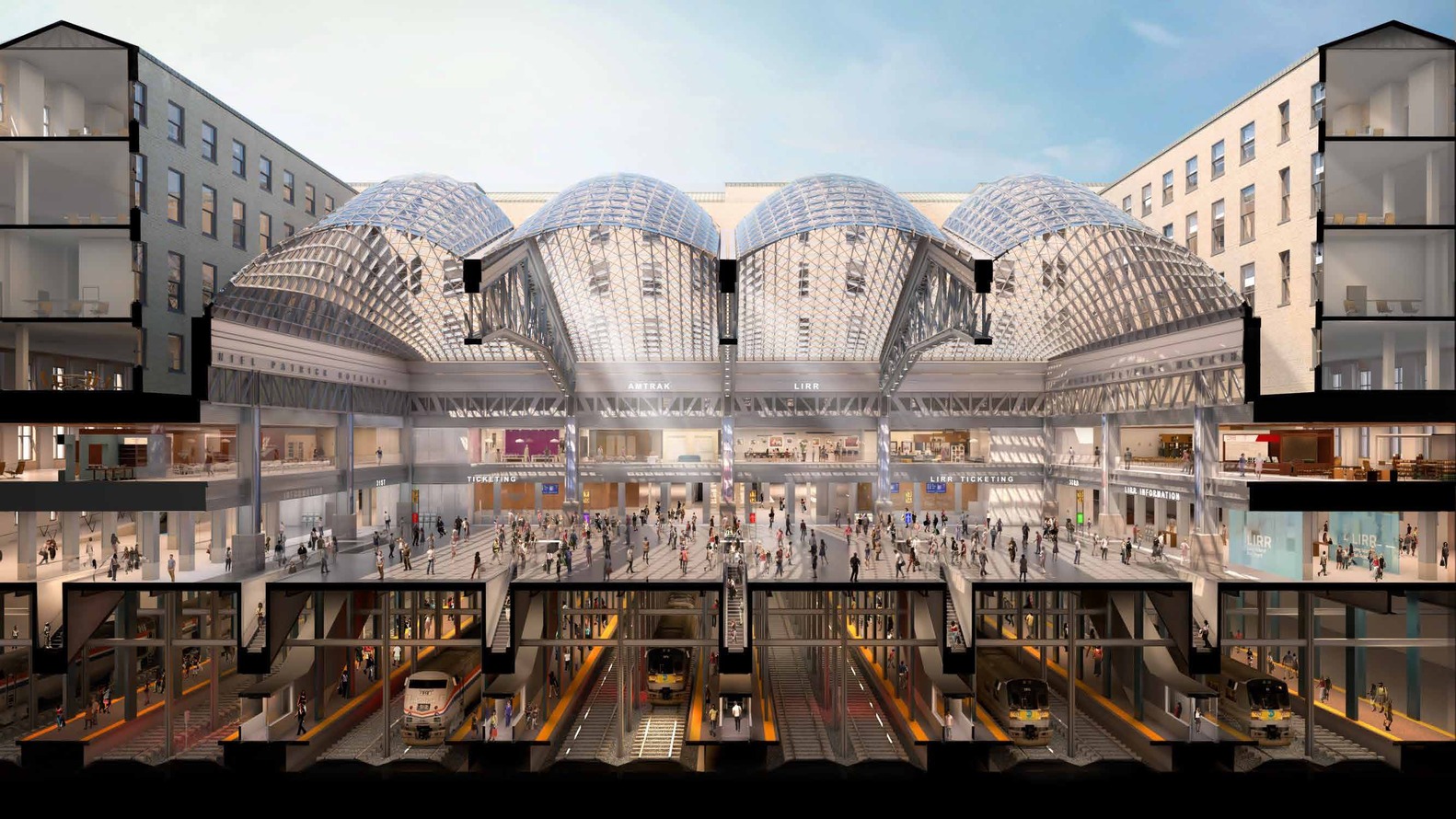 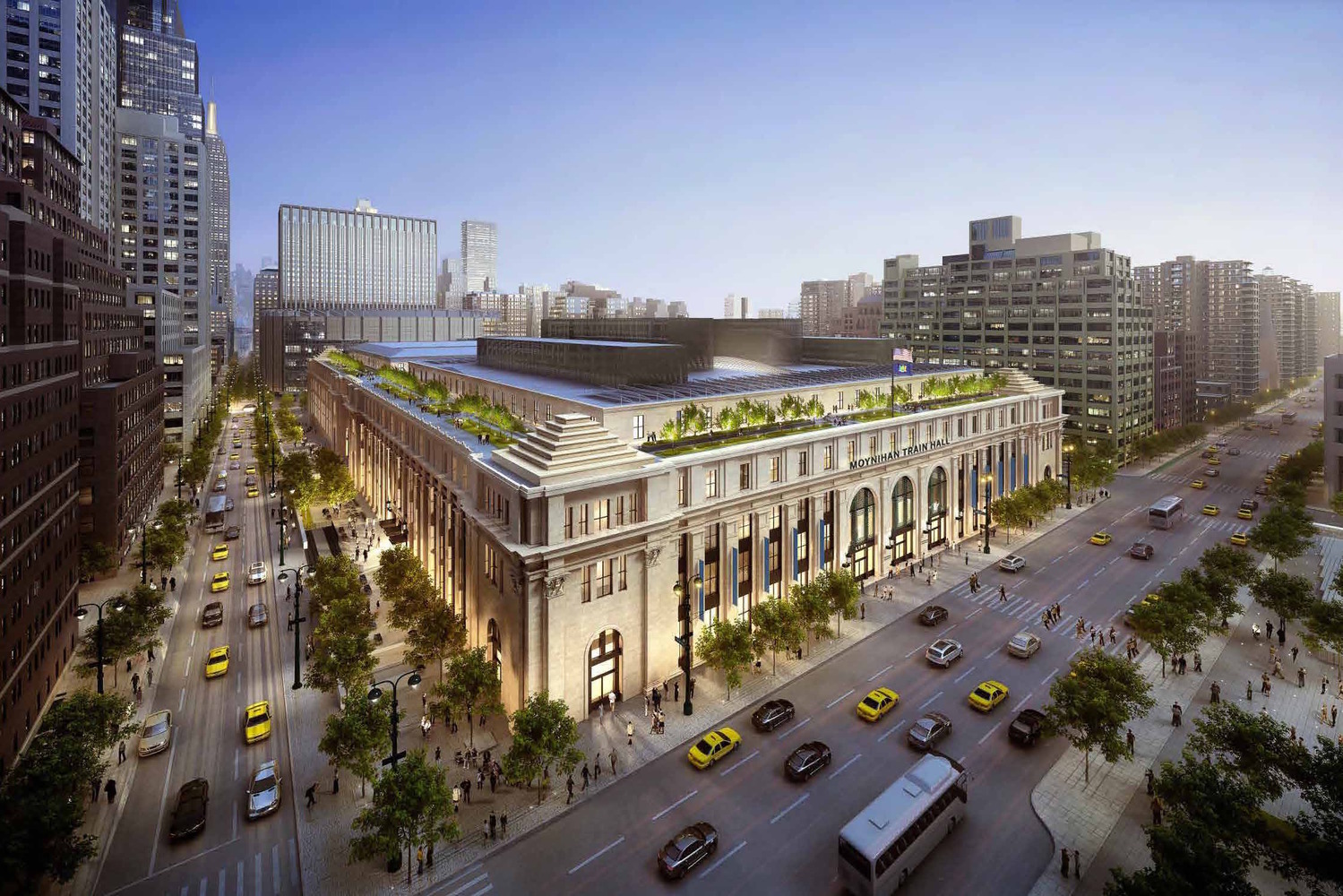 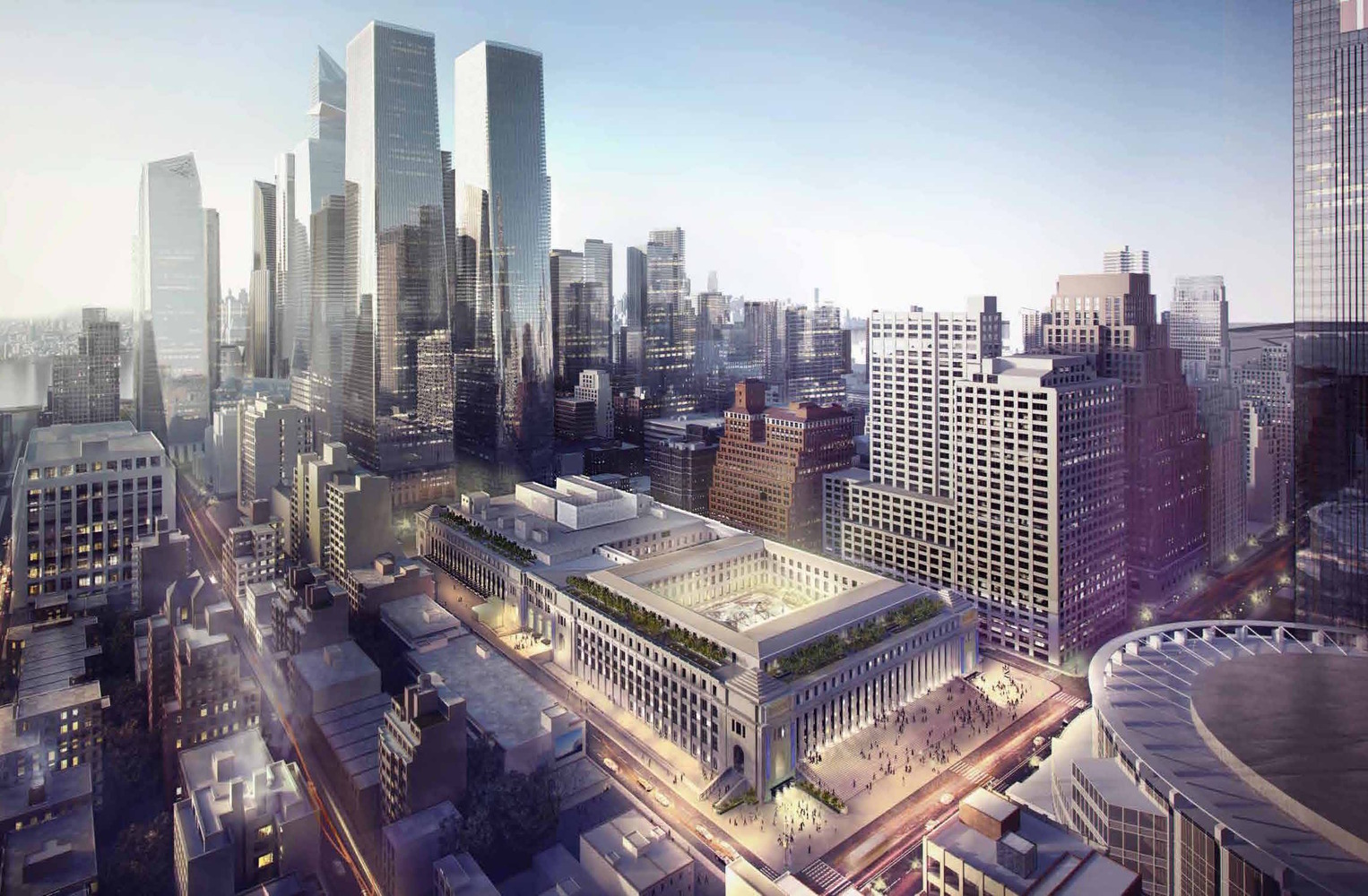 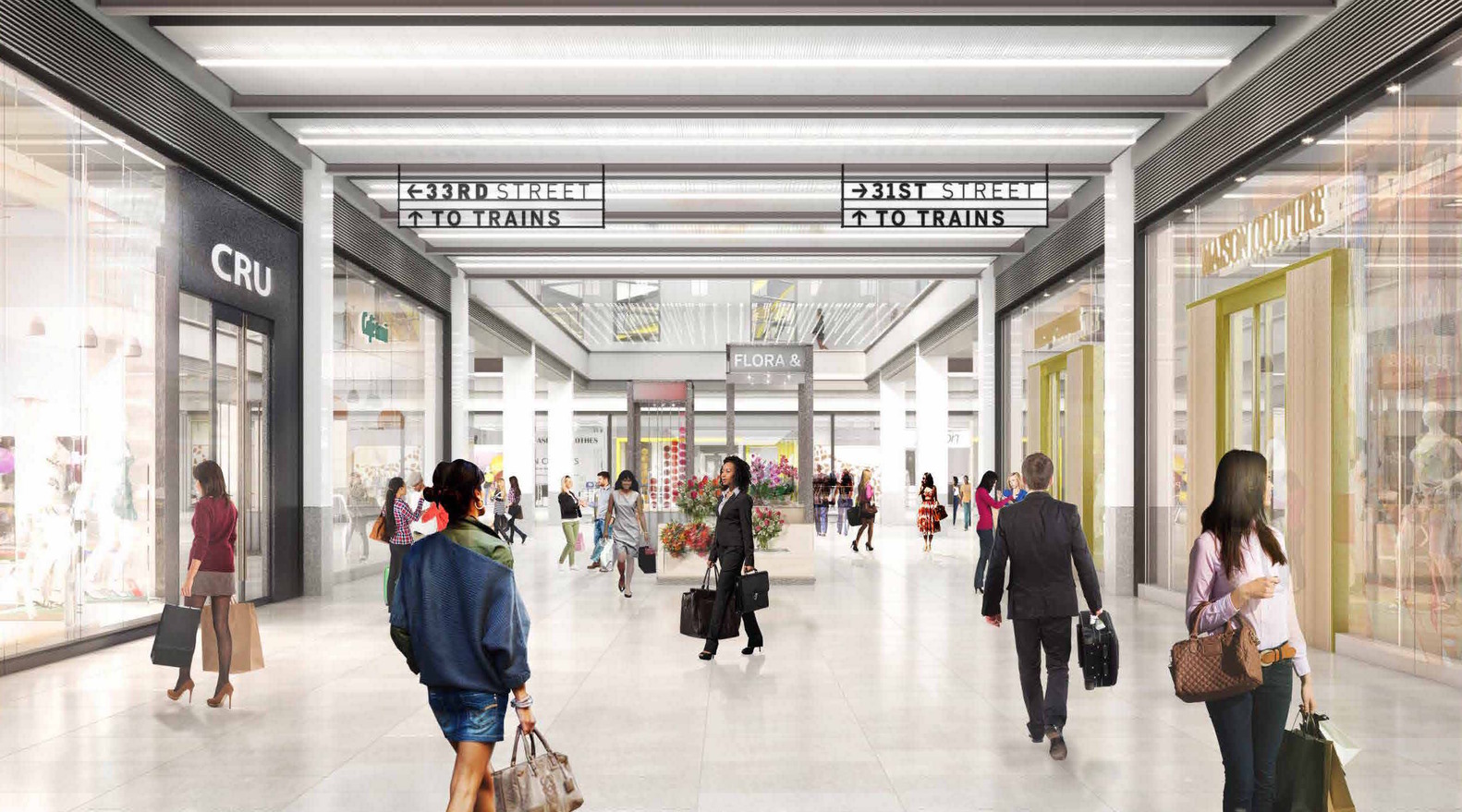 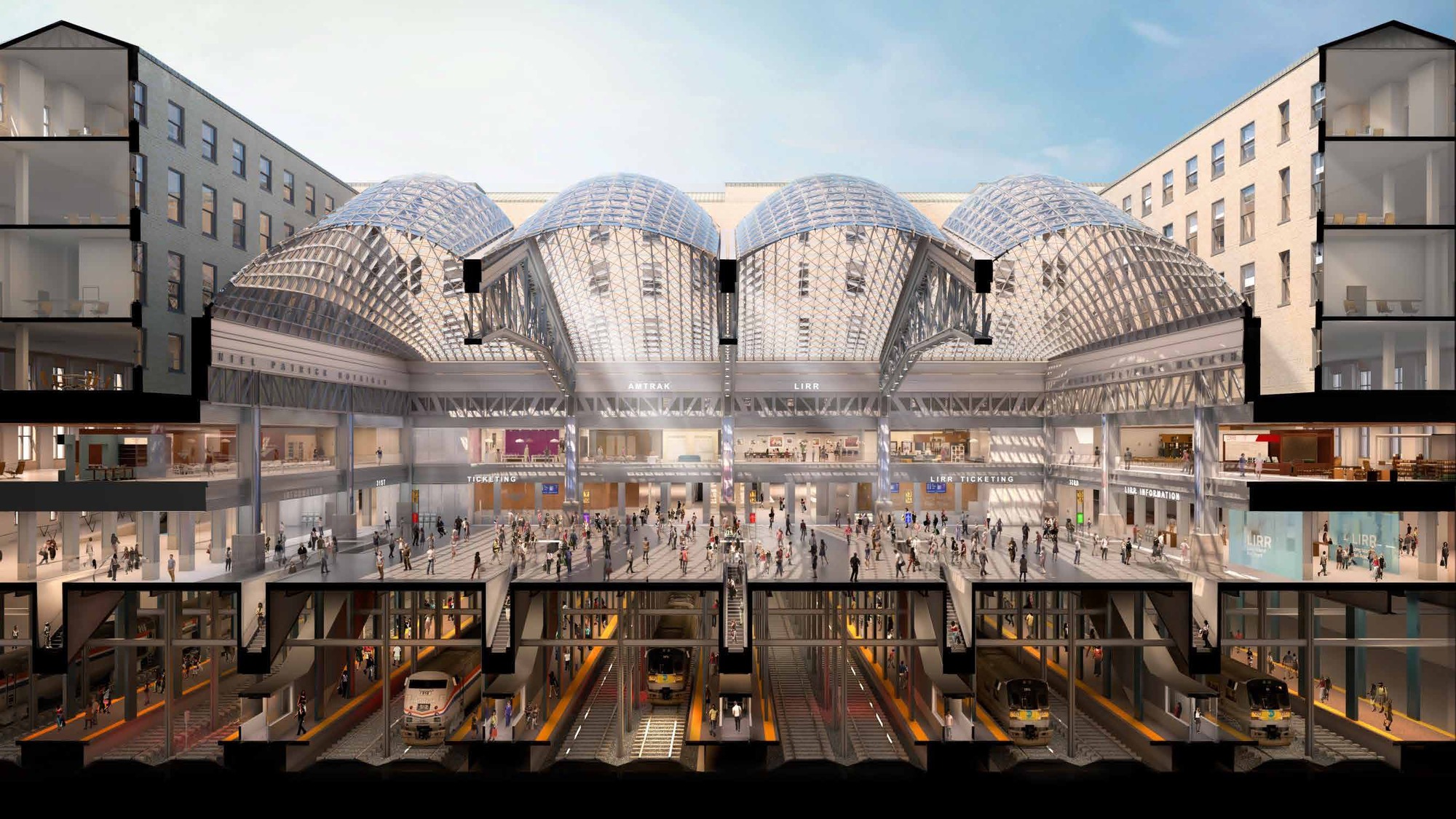 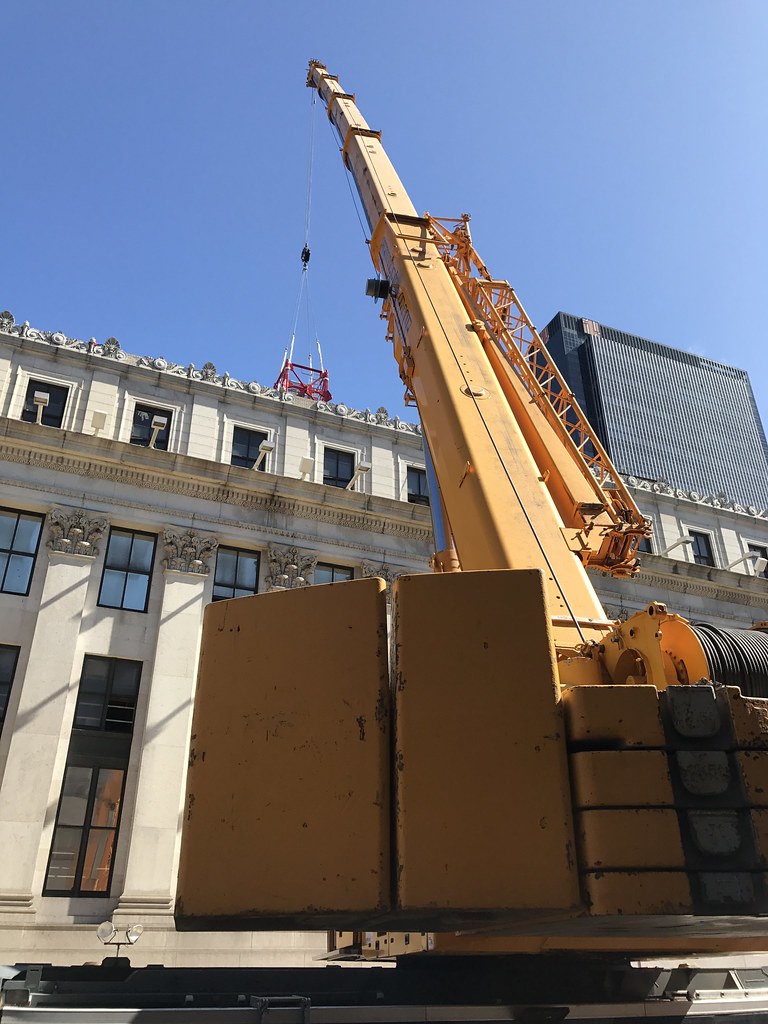 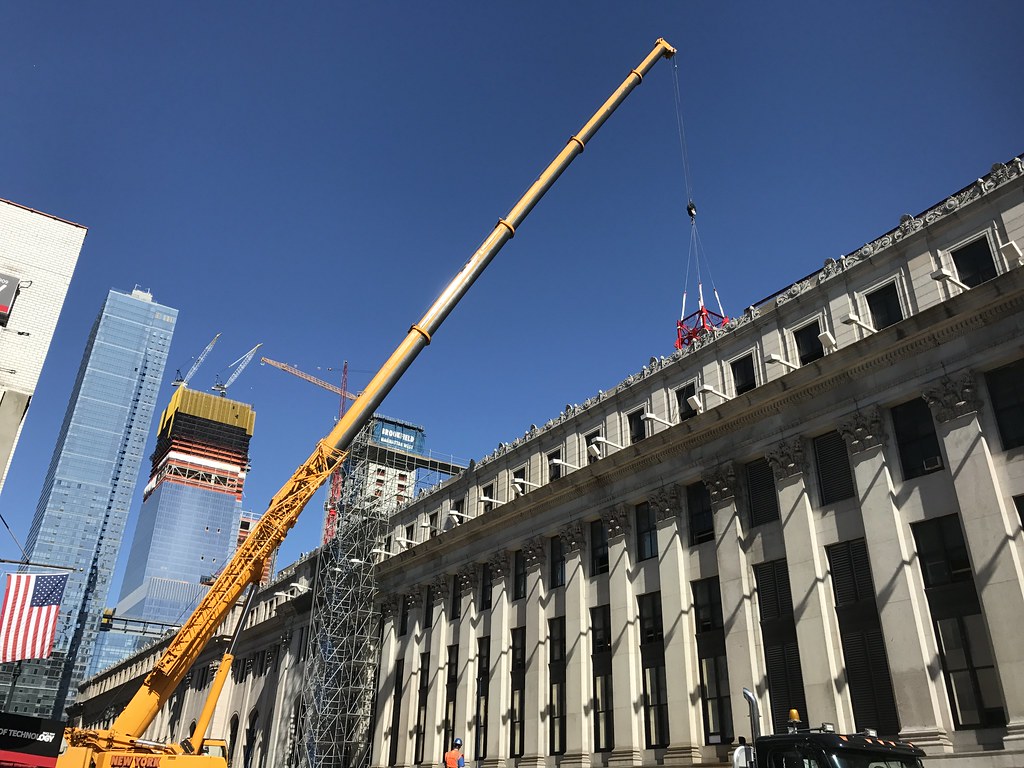 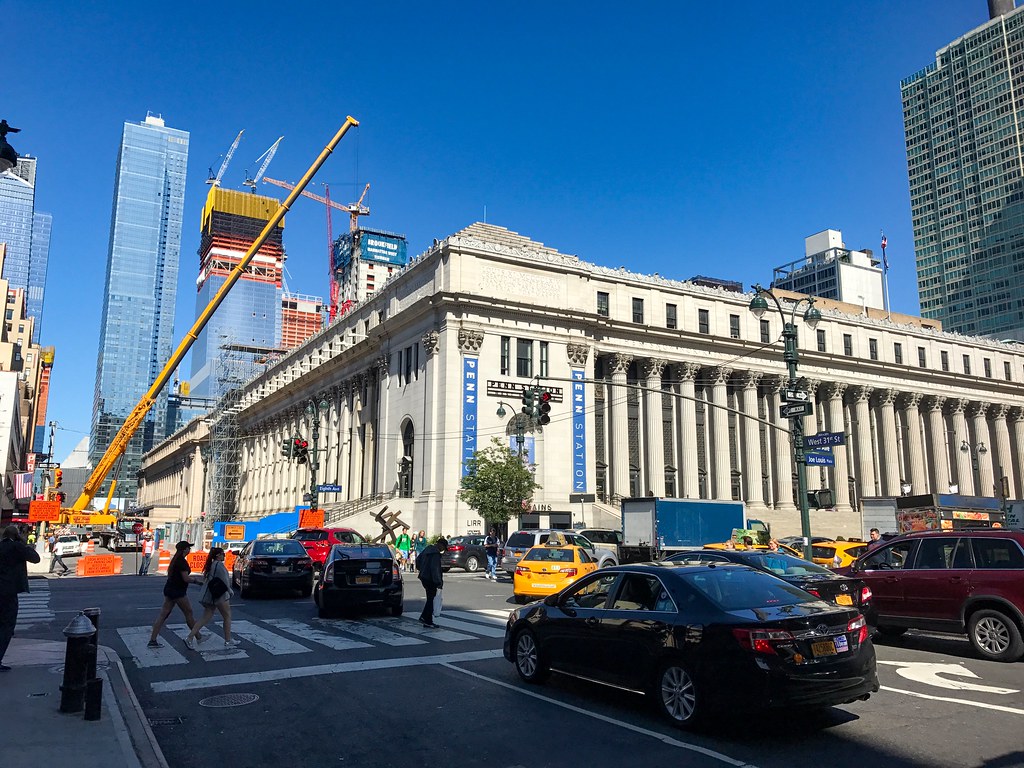 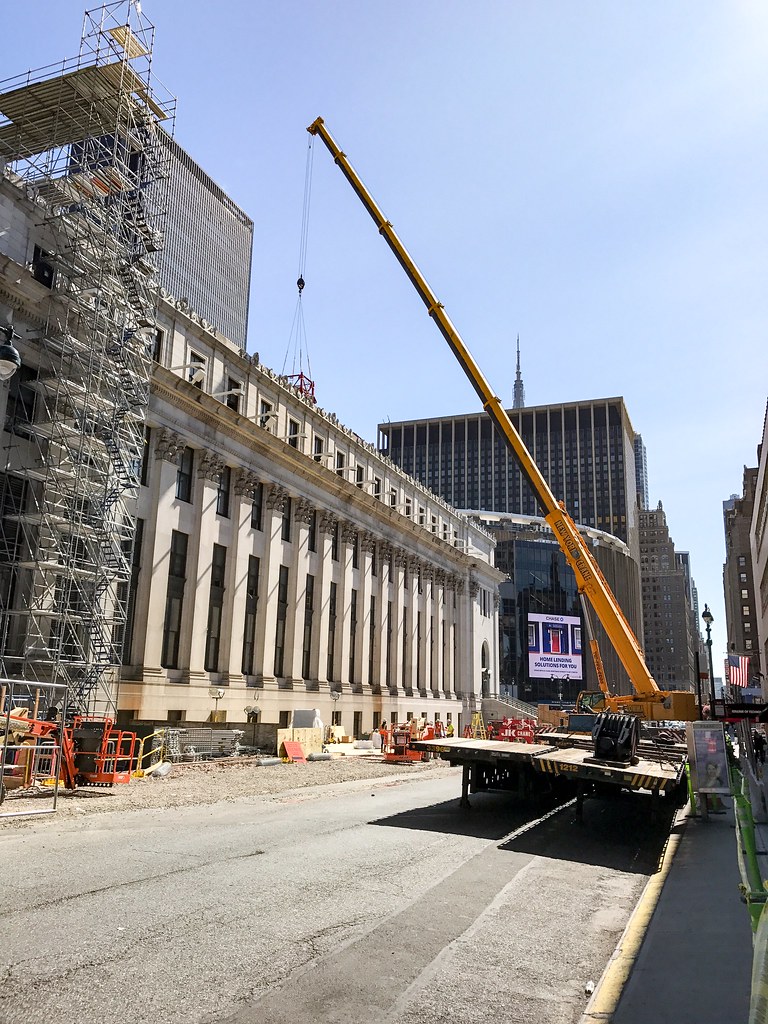 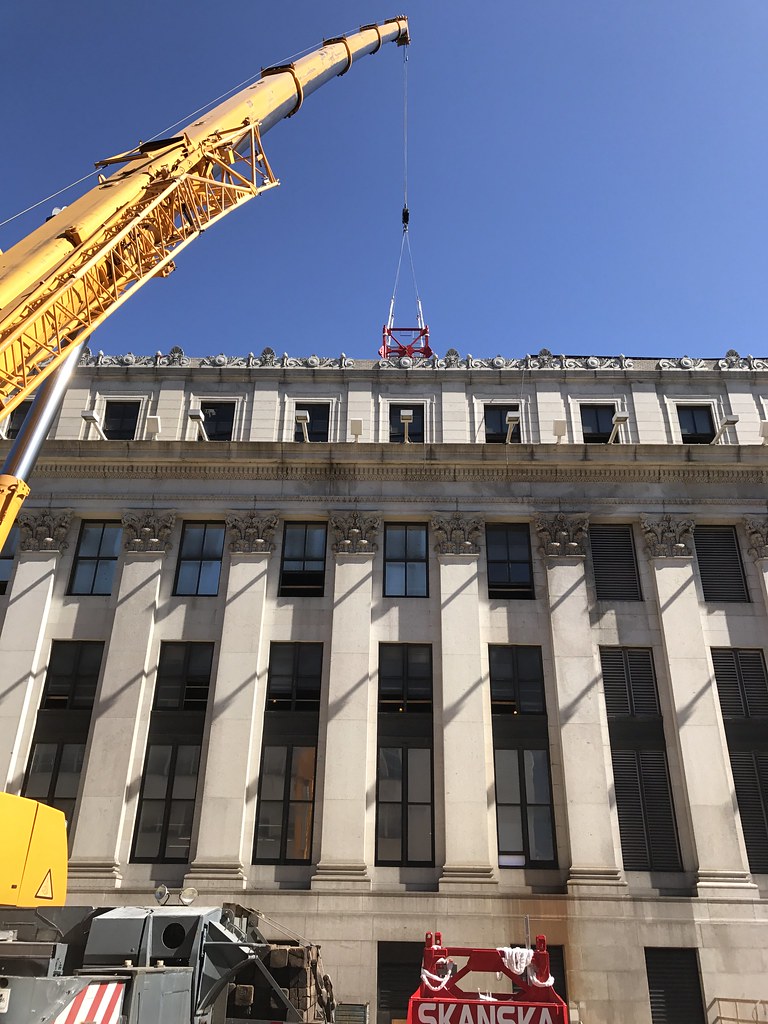 Awesome shots all around Tec!

I walked through the newly opened entrances last week. Northeast and southeast entrances from moynihan going down to penn across the street.

Crane is up. Pic from Tuesday.

I have a feeling that once this station is up and running it’ll be easier to justify tearing down MSG and building a new Penn Station (fingers crossed).

One can dream. Although even with a rebuilt station, I don’t think we can ever replace what was once there (would cost too much).

Call me crazy, but between Obama and Trump, you’ll definitely remember those terms as really the rebirth of American cities. The level of urbanization is really understated, just in this picture. NYC is exploding. Although look at anywhere else, DETROIT is back from the dead, Nashville, I mean really who saw the level of urbanization coming there, and even downtown LA. They’re literally doubling their skyline. These are incredible times we’re living in. The age of Rameses!!!

If you look carefully at streetscaper’s latest picture, you can see the large support beams getting installed for the atrium space. In the previous picture from October, the former roof is completely intact. That progress is INCREDIBLE, especially for a public works project!

I think this would’ve happened regardless of Trump or Obama.
It was due!

After a calm period, 2012 and beyond has been full of towers and cranes.

The rebirth of American cities in the modern era.