The state-of-the-art World Trade Center Transportation Hub, when completed in 2015, will serve over 200,000 daily commuters and millions of annual visitors from around the world. At approximately 800,000 square feet, the Hub, designed by internationally acclaimed architect Santiago Calatrava, will be the third largest transportation center in New York City, rivaling Grand Central Station in size. In a joint venture with the Westfield Group, the Port Authority of New York and New Jersey will develop, lease and operate a major retail space at the WTC site, including in the Transit Hub.

The Hub features an "Oculus” design, which will give the facility a distinctive, wing-like appearance. When completed, the "Oculus,” the upper portion of the Transportation Hub, will serve as the main concourse. Incorporating 225,000 square feet of exciting, multi-level retail and restaurant space along all concourses, the Hub promises to be a destination location, becoming the centerpiece for the entire Lower Manhattan district.

Close-by to the Transportation Hub is the Vehicular Security Center and Tour Bus Parking Facility (VSC) construction project. As part of a comprehensive plan developed by the Port Authority, the VSC will be a state-of-the-art security screening checkpoint for all buses, trucks and cars accessing the WTC site and parking facilities. When complete, this structure will reach five stories underground into a basement with connecting ramps leading to the parking and below-grade facilities of all of the adjacent projects on the 16-acre WTC site.

Construction has made major headway on all fronts at the World Trade Center’s Transportation Hub, where spokes are now being attached to the rib-cage. The Port Authority of New York and New Jersey is building the $3.94 billion structure, which was designed by Santiago Calatrava.

Totaling 800,000 square-feet, the Transit Hub will connect major arteries to a central node directly underneath the new World Trade Center complex. While construction has taken many years, it will soon connect eleven subway lines, also servicing the PATH with three permanent platforms.

The design is impressive, and includes a retractable roof 150 feet above the street. The six underground floors will be warmed by sunlight from above; Calatrava’s inspiration originated with the idea of taking flight, and he has previously stated The Hub “resembles a bird being released from a child’s hand.”

All 114 ribs, or the steel portions that extend upward from street level to the angled sections, have now been installed; the arches above are also complete. Construction is currently focused on the wings that protrude outward, capping the structure. As of mid-June, over a dozen have been added, though — so far — the majority are on the site’s western side, removed from pedestrian access.

The Westfield Group is developing the retail portion of the Transit Hub, which will have a 365,000 square foot and 150-store underground mall. The Wall Street Journal has reported that 80% of the slots have already signed leases, with rents reportedly running between $400 and $500 per square foot. Big-name tenants already include Tom Ford, Zadig & Voltaire, and Apple; pictures of the interior’s progress have been posted on the site’s Facebook page.

The opening of the Transit Hub should jump-start the rest of the World Trade Center. Fighting between Silverstein and The Port Authority has jeopardized the future of 175 Greenwich Street — aka Three World Trade Center — which could remain on-hold if an agreement is not reached soon. GroupM’s lease has the potential to unravel if private financing is not secured by the end of this month, and the PA has seemingly walked away from the project.

Two World Trade Center’s completion is even further off, and that tower remains in a perpetual state of limbo. Construction fencing lining the site will continue to blight Church Street, and the chaotic pedestrian bottleneck at the intersection of Church and Vesey will remain impassable for the foreseeable future.

Luckily there’s light at the end of one tunnel, and the Transit Hub is set to open in December of 2015.

The Transp Center is amazing.

P.S.: Where did those renderings come from? 3 WTC looks really nice.

I concur. Yimby and Otie are the man!

Caught some action on the webcam:

Enclos crawler will come this December/January for installation of skylight.

It’s good to see this progressing now!
Is it open inside to the public by any chance? (could’ve sworn i read about it when i did research on this at college a few months back)

No, only for private events. Last month the Oculus was used for a Vogue fashion show.

On December, however, some corridors on the perimeter of the Oculus will open permanently, connecting to Fulton Transit Center, T4 and T2. 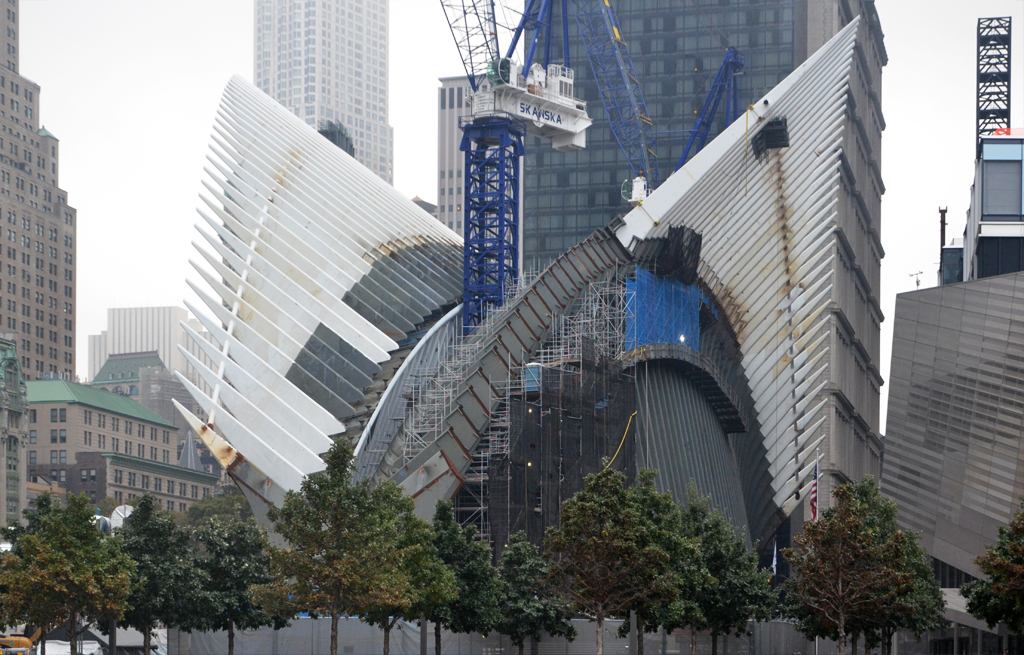 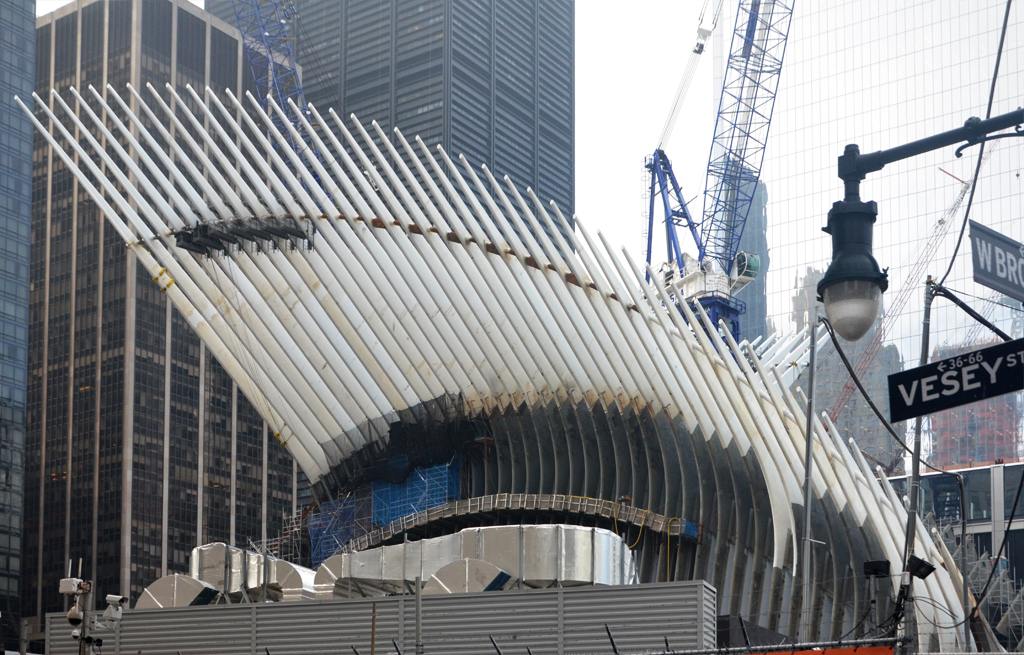 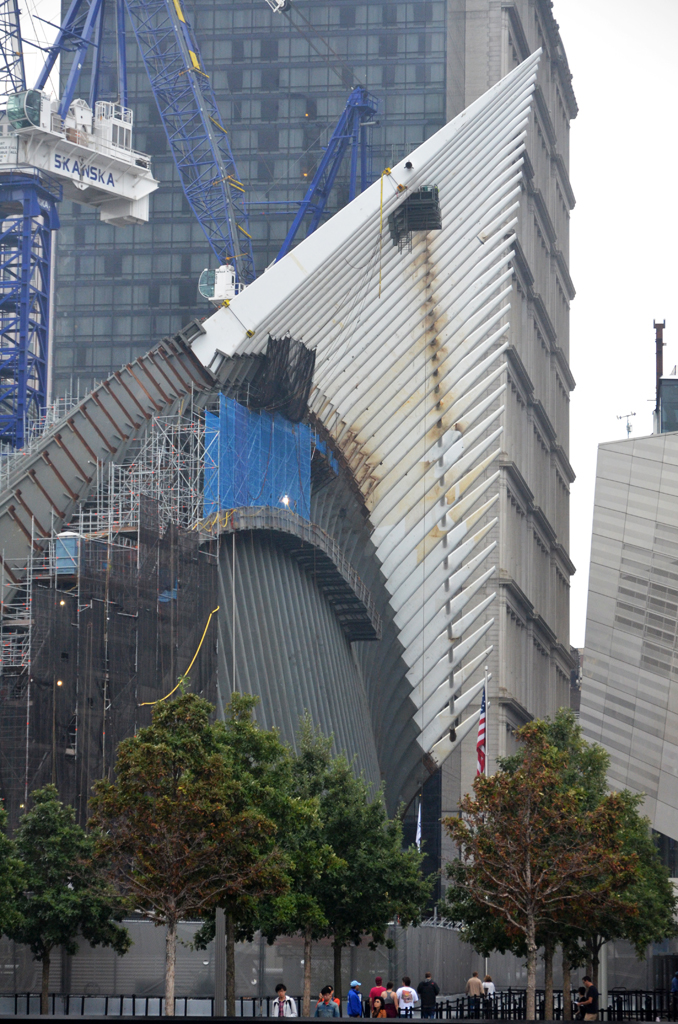 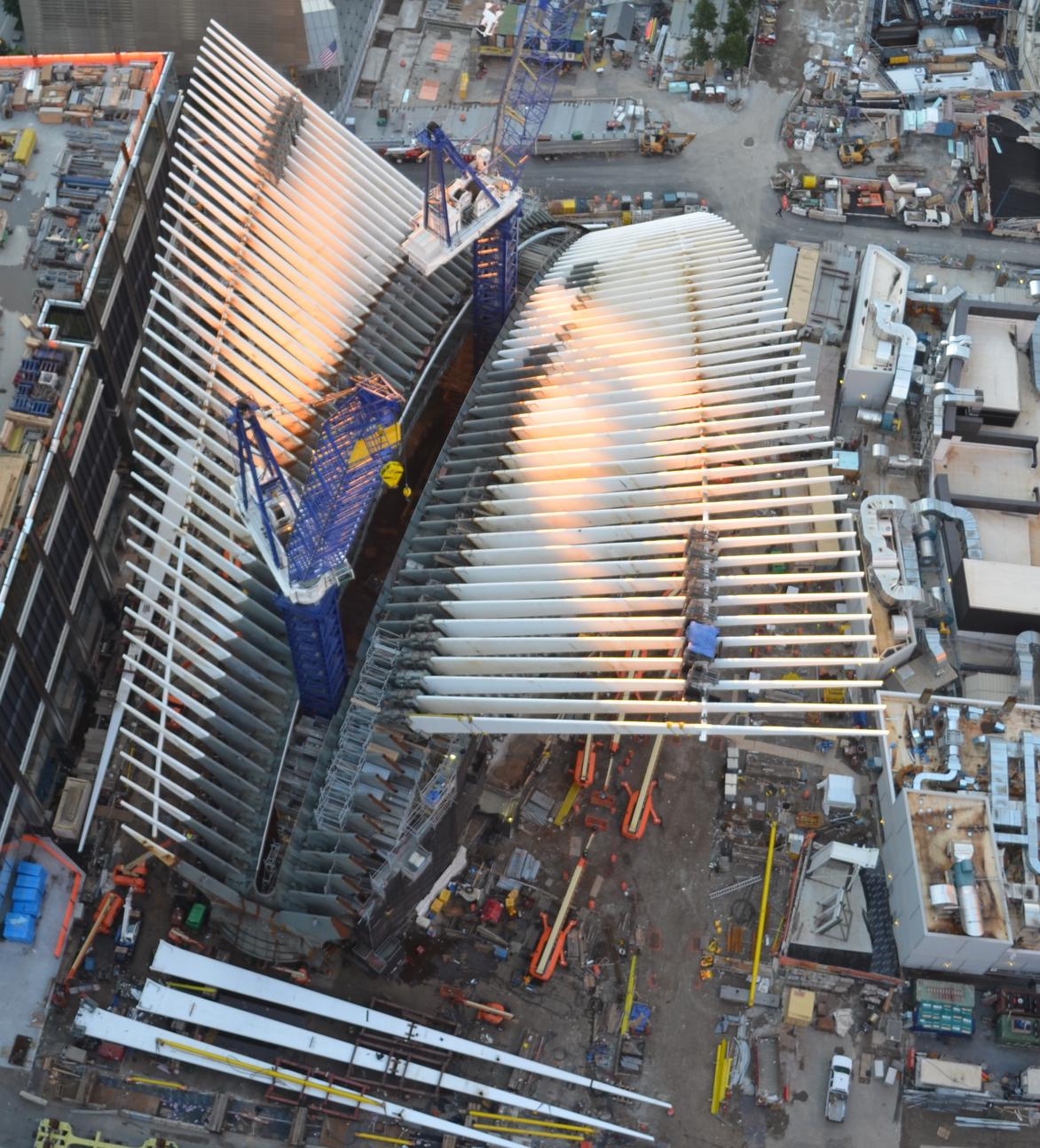