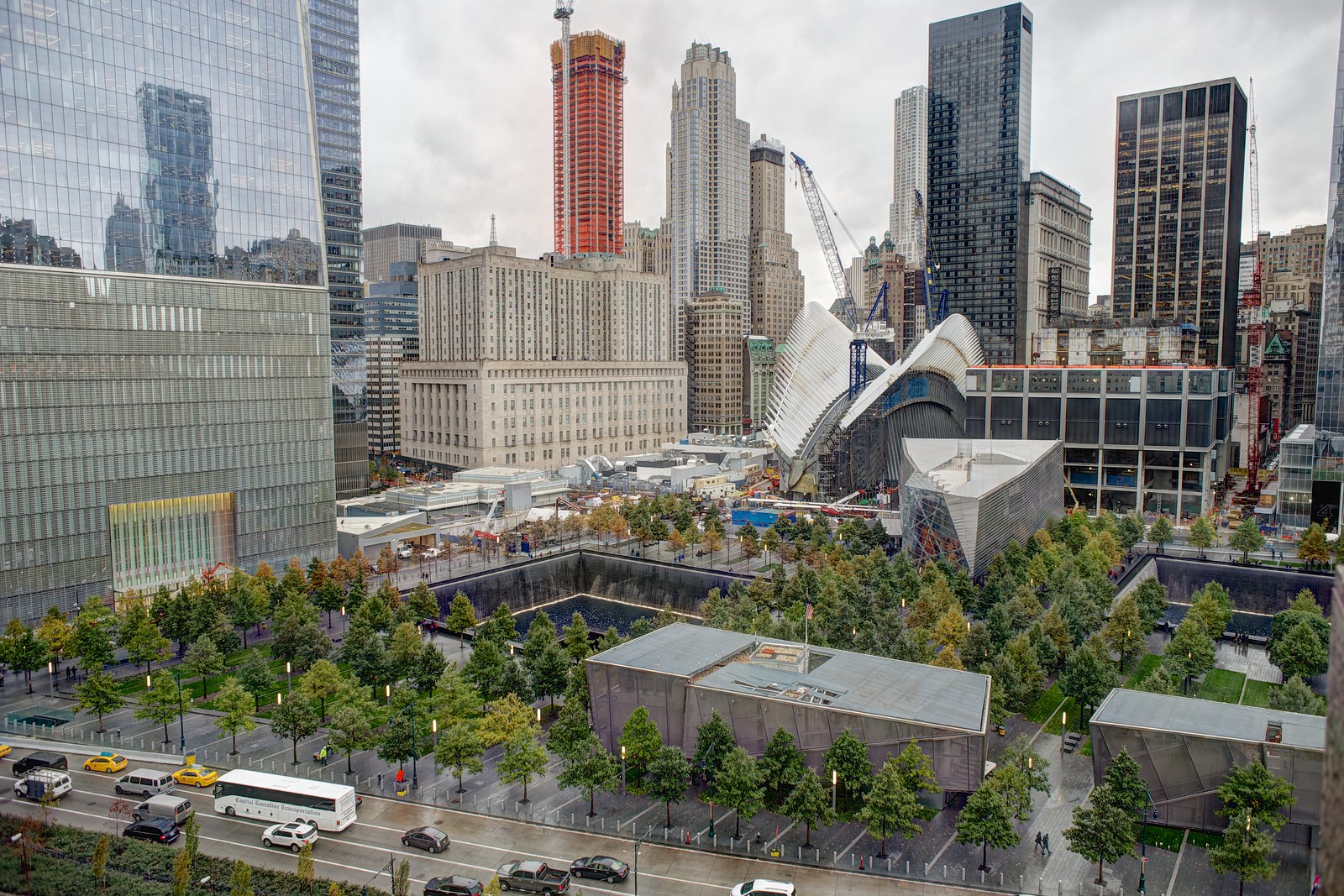 Estimated Completion Date Today: The station is expect to fully open at the end of 2015.

Brief Synopsis of the Project: The New York Post’s Steve Cuozzo did not mince words when reflecting on celebrity architect Santiago Calatrava’s World Trade Center Transportation Hub, calling it a “$4 billion boondoggle” and “a self-indulgent monstrosity.” Sure, the station will be six years behind schedule when it fully opens and have exceeded its budget by $2 billion while providing no new station stops or additional tracks.

But perhaps the PATH Station will evoke feelings of resiliency, or fuel development downtown. USA Today quoted Mr. Calatrava as comparing his creation to Grand Central Station, saying “it will be a motor for development.” The station’s first platform opened earlier this year.

“The Port Authority looks forward to the completion of the World Trade Center Transportation Hub as a world-class transit center that will serve as a gateway to Lower Manhattan and is expected to serve over 250,000 passengers a day,” a spokeswoman for the Port Authority told Commercial Observer. 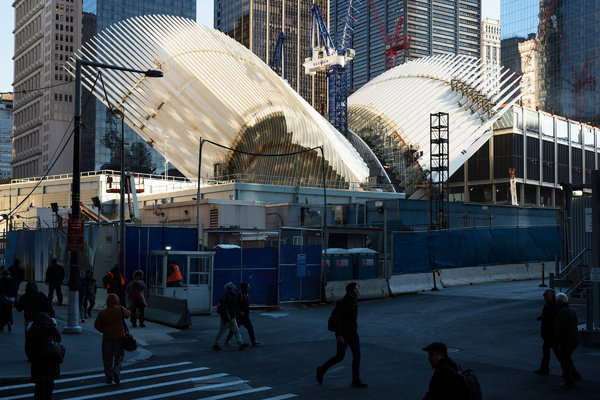 The steel ribs of the World Trade Center Transportation Hub rising in Lower Manhattan in November. The hub was initially promised to be complete in 2009; now it is scheduled to open in 2015.

With its long steel wings poised sinuously above the National September 11 Memorial in Lower Manhattan, the World Trade Center Transportation Hub has finally assumed its full astonishing form, more than a decade after it was conceived.

Its colossal avian presence may yet guarantee the hub a place in the pantheon of civic design in New York. But it cannot escape another, more ignominious distinction as one of the most expensive and most delayed train stations ever built.

The price tag is approaching $4 billion, almost twice the estimate when plans were unveiled in 2004. Administrative costs alone — construction management, supervision, inspection, monitoring and documentation, among other items — exceed $655 million. 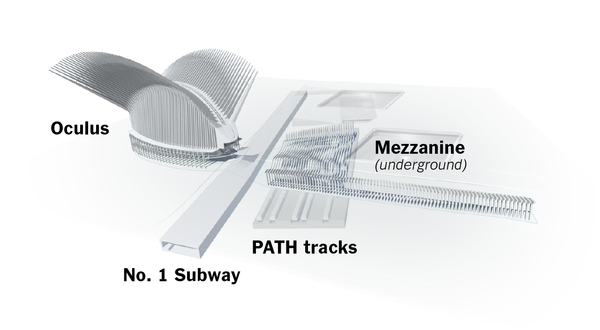 Even the Port Authority of New York and New Jersey, which is developing and building the hub, conceded that it would have made other choices had it known 10 years ago what it knows now.

“We would not today prioritize spending $3.7 billion on the transit hub over other significant infrastructure needs,” Patrick J. Foye, the authority’s executive director, said in October.

The current, temporary trade center station serves an average of 46,000 commuters riding PATH trains to and from New Jersey every weekday, only 10,000 more than use the unassuming 33rd Street PATH terminal in Midtown Manhattan. By contrast, 208,000 Metro-North Railroad commuters stream through Grand Central Terminal daily.

In fact, the hub, or at least its winged “Oculus” pavilion, could turn out to be more of a high-priced mall than a transportation nexus, attracting more shoppers than commuters. The company operating the mall, Westfield Corporation, promises in a promotional video that it will be “the most alluring retail landmark in the world.” 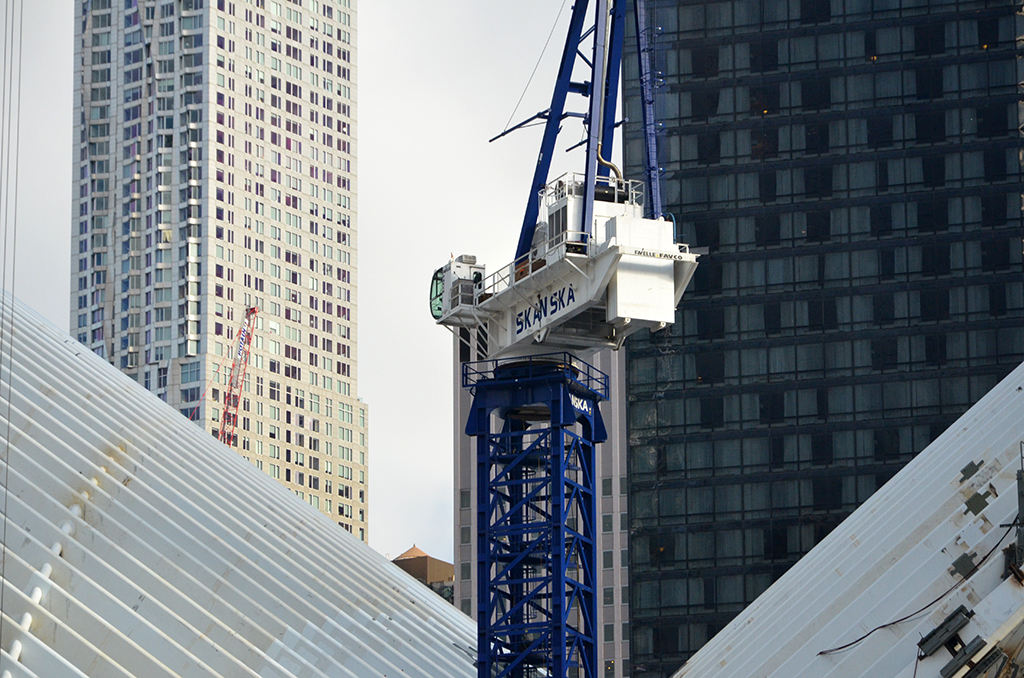 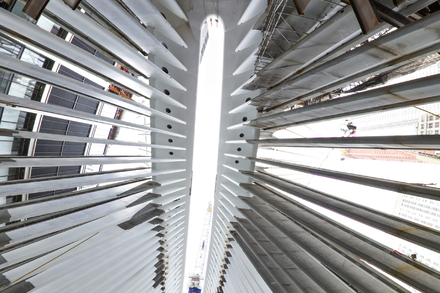 Inside, Looking Out, at the World Trade Center ‘Oculus’

A panoramic view from inside the “Oculus” pavilion of the World Trade Center Transportation Hub. The panorama is a composite of 11 photographs by Fred. R. Conrad.

Yogi Berra’s eloquent observation, “Nobody goes there any more, it’s too crowded,” applies to the new World Trade Center. The only ones staying away are smarter-than-thou pundits who have no idea w…

HOBOKEN, N.J. (CBSNewYork/AP) – A report calling for the scaling back of PATH train hours is not sitting well with commuters.

The suggestion to eliminate PATH service between 1 a.m. and 5 a.m. on weeknights was part of a report from a special panel formed by New Jersey Gov. Chris Christie and New York Gov. Andrew Cuomo to reform the Port Authority.

The governors offered the recommendations as they both vetoed an overhaul of the Port Authority.

The bill would have overhauled the agency by requiring an independent annual audit, creating an inspector general’s office, restricting lobbying and creating a whistleblower protection program. It also would have required Port Authority board members to swear they’ll act in good faith.

The recommendation to limit PATH service says ridership falls off so much during the overnights that stopping service altogether could save $10 million a year.

But many who use PATH say ending overnight service would be a nightmare.

“I don’t understand it. They just got a fare increase,” one commuter told WCBS 880’s Paul Murnane. “I wonder where the money goes.”

“There’s a lot of people here that depend on it,” Jennaro Villa, of Hoboken, told CBS 2’s Ilana Gold.

Rafael Mena, of Hoboken, is one of many concerned about how they would get to work. He takes the PATH daily for his early-morning shift in downtown Manhattan.

“That leaves us stranded here,” he said. “We are a town that’s right next to New York City. We count on the public transportation.

NEW YORK — Installation of the World Trade Center transportation hub’s vaulting glass ceiling is scheduled to begin Monday, as the final touch of one of the site’s most distinctive features, set to open this spring.

More than 35,000 square feet of glass will allow the sun to shine down on PATH and New York City commuters between the arching concrete beams, or “ribs,” of Santiago Calatrava’s whimsical mass transit depot. The design has been likened alternately to a colossal bird in flight and a stegosaurus crouching near the base of the 1,776-foot 1 World Trade Center tower.

Installation of over 700 glass panels measuring 5’ X 10’ will take three-four months, a spokeswoman for the Port Authority of New York and New Jersey said today. Enclos, a firm specializing in large-scale glazing projects, will do the work.

As the ceiling is installed, access to and throughout the hub will continue to open in phases, the Port Authority said.

The entire hub, including the so-called “Oculus,” a vast open space directly below the glass ceiling, plus 400,000 square feet of retail and dining space, is expected to be complete by the end of this year or early 2016.

The hub’s latest price tag is $3.95 billion, $2.9 billion of which is being paid for by Federal Transit Administration funds, the Port Authority said.

“Lower Manhattan is one of the most historically significant and vibrant urban neighborhoods in the world, and the World Trade Center Transportation Hub will provide the transit interconnectivity residents and visitors need,” Port Authority Executive Director Pat Foye said in a statement.

World Trade Center Transportation Hub, known as the Oculus, opens to the public on Thursday, May 7, 2015. See photos of the $3.9 billion station.

Workers finish at the entrance of PATH train, platform B, inside the World Trade Center Transportation Hub in Manhattan on May 6, 2015. Platform B will be open to public on May 7, 2015. (Credit: Yeong-Ung Yang)

Interior view of the Oculus, framed by white ribs next to the World Trade Center and 911 memorial site on May 6, 2015. By Yeong-Ung Yang

Exterior view of the Oculus, framed by white ribs next to the World Trade Center and 911 memorial site on May 6, 2015.

Workers paint on Platform A. Platform B will be open to public on May 7, 2015.

Workers paint on Platform A. Platform B will be open to public on May 7, 2015. By Yeong-Ung Yang

An exterior of the World Trade Center Transporation Hub, also known as the Oculuc, in Manhattan on Wednesday May 6, 2015.

It looks as if the panels to go over the mechanisms and the glass panels is now starting to go up!