Site is on one of Brooklyn’s busiest corners

A new residential tower may be coming to one of Brooklyn’s busiest corners.

A big Manhattan real estate player has snapped up an old office building across the block from Downtown’s giant City Point development and has plans to raze it to make way for a new condo or rental building, sources told the Daily News.

The developer, JDS Development, bought the site at 340 Flatbush Ave. Ext., for $43.5 million, in partnership with former Chelsea Hotel owner the Chetrit Group.

The 174,000 square feet the developers can build as of right at the site could be configured in various ways, including as a stumpy 12-story building or as a slender tower with setbacks.

JDS CEO Michael Stern declined to comment on the transaction.

The first permits are up for JDS Development‘s new building at 340 Flatbush Ave. Extension in Downtown Brooklyn, and the site will soon give rise to the borough’s tallest building. SHoP is the architect of record, and Katherine Clarke previously reported on the assemblage earlier this month, at the Daily News. The Chetrit Group is also involved with the project.

DOB filings indicate the tower will total 555,734 square feet, including a 108,799 square foot commercial component. The remaining 446,734 square feet will be split between 495 residences.

In terms of height, 340 Flatbush Ave. Extension will tower well above all competing developments in Downtown Brooklyn. The building will rise 70 stories and 775 feet tall, and if the high-rise includes structural components above the top floor — like any sort of spire — the skyscraper could be even taller.

The vicinity is seeing a major development boom, justified by excellent transit access; the site is a short walk from eight different subway lines. 340 Flatbush Ave. Extension is also across the street from the City Point development, which may also vie for the title of Brooklyn’s tallest, pending details on the site’s third phase.

With a plateau emerging at the 600-foot level, the filings for 340 Flatbush Ave. Extension represent a major step forward for the Brooklyn skyline. Given JDS and SHoP’s recent collaborations, an iconic and ground-breaking design is likely, and the tower should be worthy of its place at the top of DoBro.

No completion date has been formally announced — and renderings have not yet been released — but given the fresh permits, progress is likely imminent.

Haha!! Where the heck did that number come from?? I wish!! 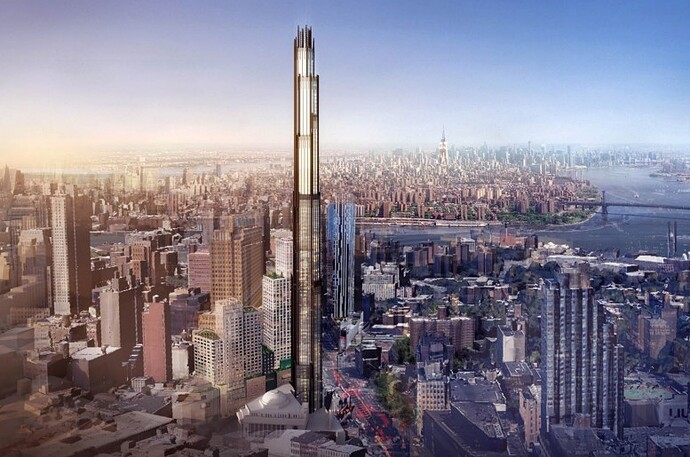 Now THAT is is a supertall and a half!

Looks to be around 1400ft! Looks incredible absolutely gob smacked, a true beacon for Brooklyn!

magnificent. I hope it will materialize as such. 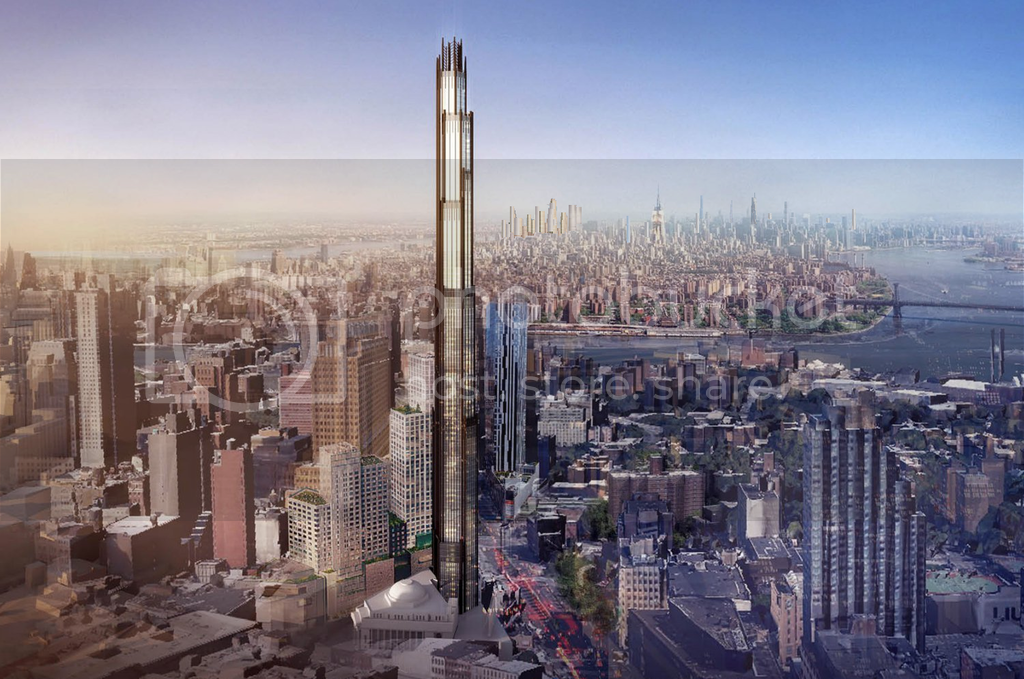 Yesssss. The best design yet!

I’m surprised. Awe struck. This is too good.

Awesome. This is really a great design. Gotham-esque!!! Looking forward to see what SHoP will do for both 360 Tenth and 80 South Street.

Hopefully this will start a trend for a taller Brooklyn skyline! That would be dope. haha.

I have this idea in my head that by 2030 there will be 5 massive peaks in NYC. Midtown, Long Island City, Downtown Brooklyn, Downtown Manhattan, and Jersey City. (Who know’s what Newark may look like by then too!) One of these locations is going to feature a tower in excess of 2000 feet and there will be a bunch of towers between 1000 and 2000 feet among the other locations!

ShOP and JDS are adding icons to NYC!!!

Glad you are back, Robert! Was wondering where you were!

I agree! ShOP and JDS are top of the heap!

I was traveling for work, amigo!

So far December has been a fruitful month for Joseph Chetrit and his family and friends.

In the past week, the Chetrit Group and its various joint venture partners closed $185 million in debt across two projects, Commercial Observer has learned.

Iron Hound Management Company brokered both transactions, which include a $115 million loan from Fortress Investment Group for a development in downtown Brooklyn and a $70 million loan from SL Green Realty Corp. on a row of empty retail shops on West 34th Street.

“It’s been a busy week for Iron Hound,” said Robert Verrone, a principal at the New York-based based advisory firm who helped arrange the two deals.

The Chetrit Group and Michael Stern’s JDS Development Group are using the $115 million floating-rate loan from Fortress to refinance existing debt on the landmarked Dime Savings Bank of New York at 9 DeKalb Avenue and fund the acquisition of an adjacent site at 340 Flatbush Avenue Extension.

It was not immediately clear how much debt remains on the landmarked bank site, but Bank of America provided a $7.5 million refinancing on the property in May 2007, city records show. Less than a year later, J.P. Morgan Chase acquired the property and its outstanding debt.

The Chetrit Group and JDS later struck a deal to buy the former bank property from J.P. Morgan for $90 million and plan on using its air rights to construct a residential tower on the neighboring site that the two development firms also own, as Crain’s New York Business reported in August 2015. The joint venture partners then bought the site at 340 Flatbush Avenue Extension for $43 million in May 2014.

While the former bank could be converted into a retail space or a lobby for the adjacent building, the new residential tower is reportedly going to rise between 1,000 and 1,200 feet.

This is officially 1066ft according to the latest Yimby article! 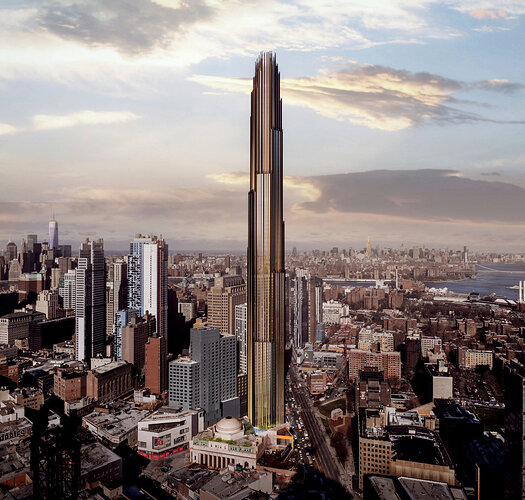 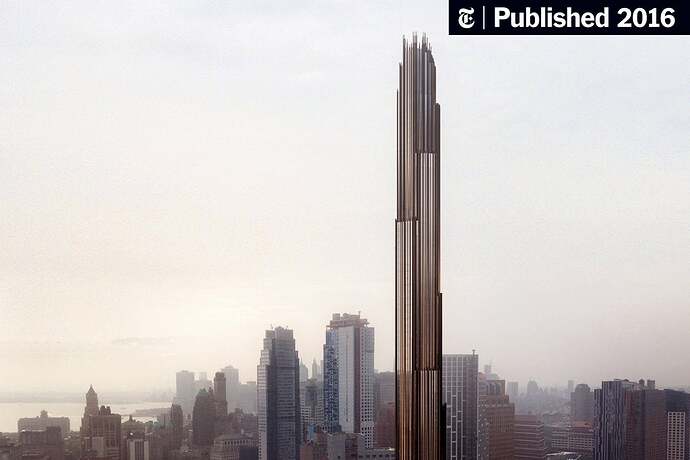 The building, which would rise beside Junior’s Restaurant on DeKalb Avenue in Downtown Brooklyn, would be almost twice as high as anything around it.

73-story tower, to be built by JDS Development Group and the Chetrit Group, would be more than twice the height of the 512-foot Williamsburgh Savings Bank building, which had been the tallest in the borough for nearly a century.

The plans were drawn up by SHoP Architects, whose portfolio includes another of the most recognizable new buildings in Brooklyn, the Barclays Center.

For this project the architects drew inspiration from the limestone-columned Brooklyn Dime Savings Bank, which sits next door to the site of the tower, and will be incorporated into the property. The tower’s bronzed ribbons running up its glassy sides draw on details of the bank, and its hexagonal shape echoes the bank’s footprint… 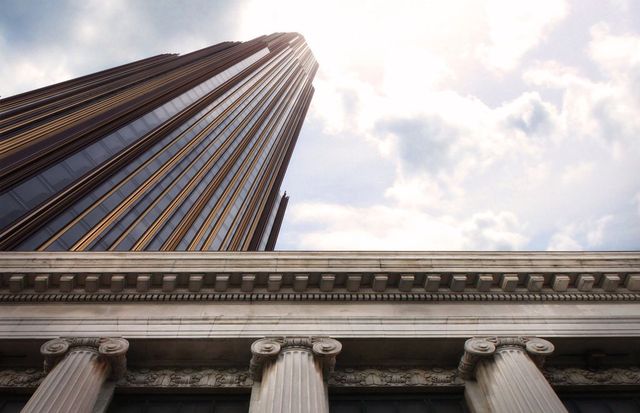