A major construction project at Grand Central Terminal is giving the city the chance to restore Park Avenue’s malls to their former glory.

MIDTOWN MANHATTAN, NY — Work is set to begin on a massive, 20-year project to rebuild parts of Grand Central Terminal, and the construction may give the city the chance to restore Park Avenue to its former glory.

As the name suggests, Park Avenue was once home to wide, plant-covered pedestrian malls, but the medians were narrowed in 1927 to add extra lanes of car traffic.

> Starting early next year, the $2 billion rehabilitation of the Grand Central train shed will force the city to tear up a stretch of the avenue as they repair tunnels and the 1.8-mile Park Avenue viaduct.
> That provides an opportunity to reimagine a stretch of Park Avenue between Grand Central and 57th Street, including the possibility of widening the malls to allow pedestrian access once again.

An online portal launched last Monday by the Department of Transportation gives an overview of the avenue’s history, lists some possible improvements and includes a survey where New Yorkers can weigh in on which version they like best.

Options include leaving the medians as-is, expanding them slightly, or expanding them significantly to add walkable paths, public art, events, tables and chairs, concessions and even bike lanes.

The MTA’s Grand Central repairs will disrupt Metro-North train service and close some streets and sidewalks along the avenue, starting with East 47th and 48th streets. The train shed needs repairs because its metal and concrete have been worn down over the years by water and de-icing chemicals, according to officials.

Park Avenue seen in April during the coronavirus pandemic. The city is asking residents to weigh in about possibly widening its pedestrian malls during a major construction project. 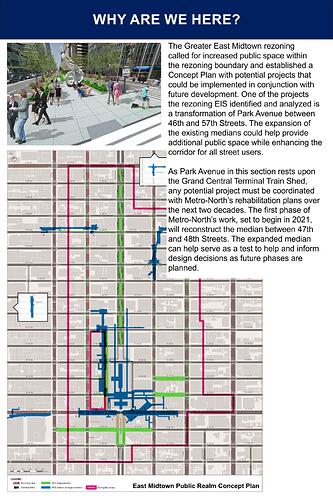 I am a car guy but city streets should be pedestrians 1st so this idea seems pretty good and more trees is never a bad thing.

Robert is going to love this.

I think it would be fun to walk up the middle of Park. Probably safer to avoid cars making turns etc.

I used to do that when I went to Sinai Dental. It’s nice. 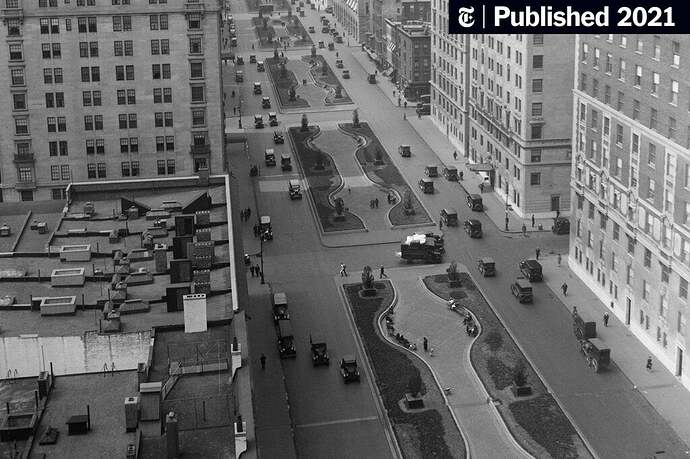 The medians along Park Avenue were once a fashionable place to take a stroll. Today, pedestrians are not really welcomed. 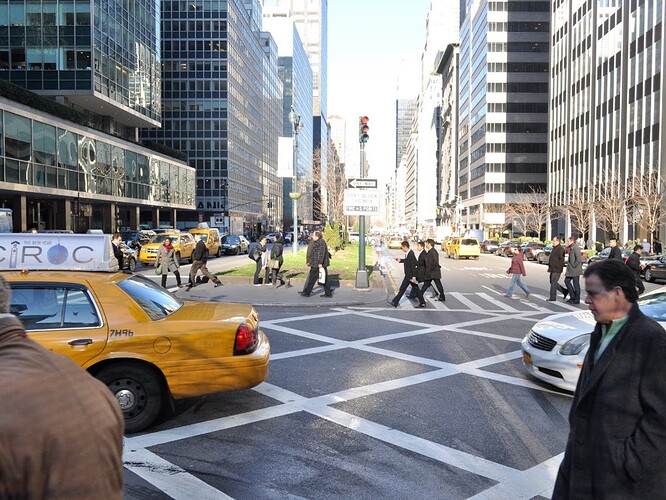 Age-old dreams of putting the "park" back in Park Avenue are inching closer to reality, as the city plans to solicit designs within weeks.

Great news. I’d love to see wider, greener sidewalks on Madison, 5th, and 6th also (and then on all avenues and major E-W cross-streets).

They claim its going to take so long because Park Ave will be intermittently torn up over the next two decades for work on the Metro North train shed below the street.

NYC’s Park Avenue Medians Are Getting a Face-Lift
With JPMorgan and Grand Central Station set to temporarily tear up the avenue’s malls, local officials are seizing the opportunity to renovate. 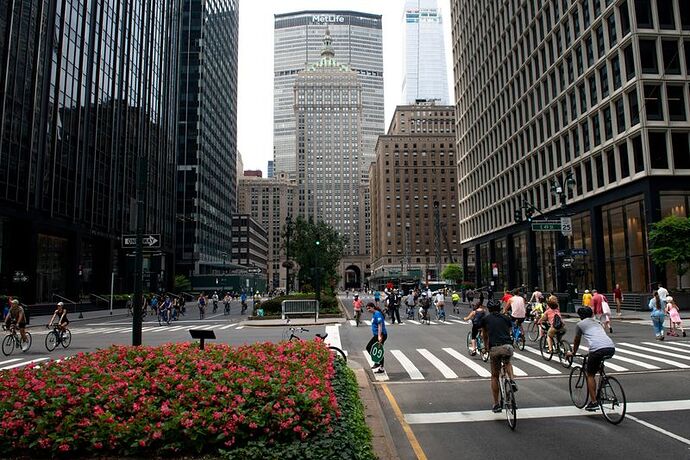 A long-ignored strip of planted medians on an iconic Manhattan avenue is set to undergo a major renovation that could last decades.

New York City’s Department of Transportation plans to hire a landscape architect to reinvent the malls that divide Park Avenue along the 11 blocks from Grand Central to East 57th Street. Councilmember Keith Powers, who represents the area, says he expects the request for proposals to be sent out in the coming months. The renovations will proceed in stages and likely won’t be completed for at least 20 years.

The changes will also leave less room for vehicles. NYCDOT hopes to more than double the width of the malls in some spots by cutting out two lanes of traffic, leaving two running in each direction. In the end, the malls could expand to as much as 110,000 square feet from their current 50,000 square feet.

With a yet-to-be-determined budget provided by a public improvement fund, the exact design will depend on the future architect. But benches, walking and biking paths, and mall-to-mall crosswalks are all in the cards, says Ed Pincar, the Manhattan Borough Commissioner for NYCDOT, who calls it a “once in a century” infrastructure project.

For decades, rotating plantings of tulips, begonias and mums have made the malls pretty to look at, but inaccessible to pedestrians. Curbs are crumbling in some areas: Unlike other green spaces in the city, the Park Avenue malls haven’t been renovated since before the late 1920s, when they were narrowed drastically to accommodate more cars. In terms of the square footage of open space per office worker, the area ranks dead last behind Times Square, Bryant Park and Hudson Yards — an issue that has become more apparent as workers return to the city.

With the Long Island Railroad set to be redirected from Penn Station to Grand Central in December, the area will likely receive more foot traffic in the coming decade, making new pedestrian space all the more important, Powers says.

“We know Park Avenue is a hub for employment,” he says. “It’s a hub for people visiting the city. And it’s a transportation hub for the whole region.”

The impetus for the project goes beyond the malls themselves. JPMorgan Chase & Co.’s lofty new headquarters at 270 Park Avenue will require pulling up one mall between 47th and 48th Streets. The 2.5-million square foot project will house 12,000 to 14,000 of the bank’s employees.

Starting on the same block and extending to 57th Street, Grand Central plans to update its train shed — essentially an underground rail yard — located directly under Park Avenue. The shed renovation could take decades, and will at some point interfere with every mall in the 11-block expanse. NYCDOT plans to start the landscape redesign with the mall in front of JPMorgan, since it will be the first to be removed.

Most New Yorkers don’t realize Park Avenue is “essentially a bridge structure,” says Pincar. As a result of that, the final design team for the medians will have to coordinate closely with engineers. Pincar expects that congestion pricing — a plan to charge drivers to go through Manhattan’s central business district that the agency is currently studying — will mitigate potential traffic delays created by the project.

The rezoning of East Midtown in 2017 included the creation of a public realm improvement fund generated by fees from private development projects, such as those collected from air rights. (JPMorgan, for instance, has contributed at least $40 million from the construction of its new headquarters, according to Pincar.) Park Avenue is among several spaces that will benefit from that pot.

This is going to be very nice. I’d like to see car lanes replaced with greenery on every avenue and major cross-street.

When legendary architect Norman Foster agreed to design a glistening full-block building on New York’s Park Avenue in 2012, the city was still bouncing back from the financial crisis—a seemingly existential threat at the time.

Foster, now 87, had no idea at the time, but these two buildings are shaping up to be New York’s best rejoinder to post-pandemic fears about the staying power of remote work, a mass exodus to South Florida, and—crucially—that the global capital of high finance has lost its luster.

Citadel, whose move to Miami sent shock waves across Wall Street, already has 100 employees working at 425 Park Ave., which formally opens Wednesday, and expects 1,000 to be settled in by summer next year. At JPMorgan’s 270 Park Ave., welding sparks fly as construction continues on a structure that will double the number of workers on that block. In between, lunch lines run 30 people deep at food carts; a new Aston Martin showroom is on the way.

”The timing is very good—it’s coincident with all kinds of other developments in the wings,” Foster said in an interview. “There is only one Park Avenue, so it has to be special.”

Park Avenue’s 1-mile stretch in the heart of Manhattan, from Grand Central Terminal to Central Park, has long had one advantage above all: its concentration of wealth.

Along with Citadel’s Ken Griffin and JPMorgan’s Jamie Dimon, Blackstone Inc. Chief Executive Officer Steve Schwarzman works on the avenue and has a residence there. Izzy Englander’s Millennium Management and Eminence Capital are based at 399 Park, blocks away from other hedge funds including ExodusPoint Capital Management and GoldenTree Asset Management.

Investment banks PJT Partners, Moelis & Co. and Raymond James have Park Avenue addresses, too. The actual Wall Street is downtown, but the real epicenter of high finance has long been further north.

Its density of office space and proximity to transit—some commuters from Greenwich and other suburbs can reach their buildings from below street level—make it a bellwether for the future of commercial real estate in New York. Just two blocks over on Third Avenue, scores of towers remain largely empty, caught between being too old to lure tenants who want the newest amenities and too new to be demolished or converted to housing.

Park Avenue, by contrast, has proved resilient. Employees of alternative-asset powerhouse Blackstone were back at their desks as early as September 2020. The return rate at the Seagram Building is 75% Tuesday to Thursday. The spaces BlackRock Inc. and Wells Fargo & Co. are leaving for Hudson Yards will be filled by Morgan Stanley and Blue Owl, among others.

The north-south avenue is the “spine” of the city, said Vishaan Chakrabarti, an architect who’s working with Foster on 270 Park. “If Park Avenue thrives, the whole district will thrive, and that is fundamental to the entire city.”

Jon Gray has spent his entire career at Blackstone working at 345 Park Ave. The lease there runs through 2028 with options to renew, and Gray, Blackstone’s president, acknowledges there will have to be decisions about whether the 53-year-old building can be retrofitted or not.

Either way, the firm has a strong bias toward Midtown, he said in an interview.

“Park Avenue is hard to beat—it’s built for business,” Gray said. It’s convenient both for employees and for clients staying in hotels nearby. Plus, it has traffic running in both directions, making it easier to hail a cab going the right way.

“It seems like a little thing, but it makes a difference,” Gray said.

The design for JPMorgan’s 270 Park got city approval in 2018, with the bank agreeing to facilitate critical work underground to prepare one of the world’s busiest transit networks for a future that involves fewer automobiles.

Plans for the neighborhood also call for eliminating car lanes and expanding the medians—a move designed to put the “park” back in Park Avenue—and create more space for a broader swath of workers, tourists and residents in the area. The tower will be the city’s largest all-electric one.

I really hope that Rudin and Vornado partner on 350 Park. Blackstone, Rudin’s tenant at 345 Park, could anchor the new tower.

I suspect that it will be reskinned. That would be an enormous building to raze.

Because JPMC has very deep pockets and doesn’t need to make a profit on development, they were in a unique position to raze 270 Park.