Some people may not know what the skyline used to look like in the past, because they were born in the 2000s or the nineties, or just never saw a very old picture of New York

I was born in 2001 and am Sixteen years old, yet I love seeing pictures of the skyline in the sixties, I think this thread helps younger people like me think about what the previous generations have built and seen.

it’s also a great memory portal for the older people on this forum, maybe to just check how quick time flies and how far we have gone.

You can post Pictures of the New York City Skyline taken in the following decades:

All angles and qualities are allowed as well as aerials, black and whites and online pictures.

Hope this thread helps people like me discover what’s the skyline used to look like in the past.

And I appreciate this thread, NewNewYork. I was born in 1998, and have TECHNICALLY visited NYC when the twins were still standing. It was while my mother was pregnant with me. And then the first time I went IN PERSON was 2016

Skyline history!
From 1909 until 1931 a series of skyscrapers were built which claimed the title of the world’s tallest building. Skinny, masonry skyscrapers dominated the skyline. The Singer Building was first. Then came the Metropolitan Life Clock Tower near Madison Park. Then came the Woolworth Building. Next were 40 Wall Street, The Chrysler Building, and of course the Empire State Building.

throughout the 40s skyscraper construction declined due to the war and its aftermath. In the 50s metal and glass facades began to appear, especially on ‘wedding cake’ style buildings. 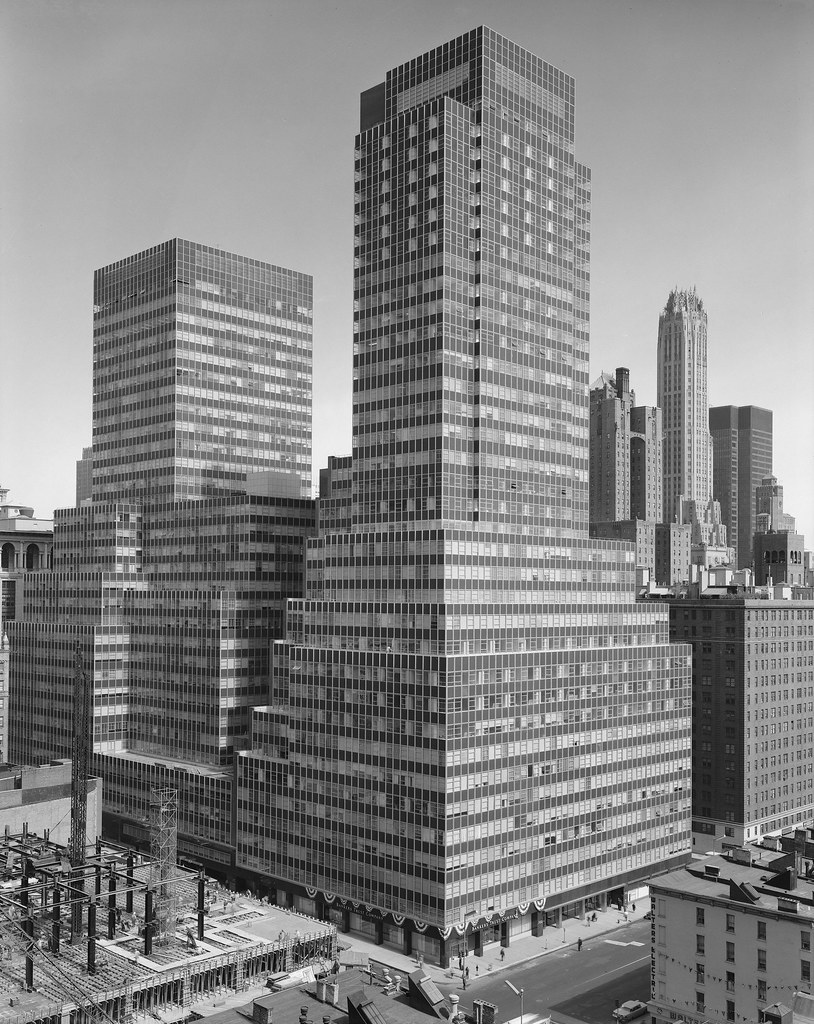 Manhattan’s skyline developed into the incredible density we recognize today between the 60s and late 70s. Modernism birthed massive boxy skyscrapers which occupied lots of space in midtown and downtown. One Chase Manhattan Plaza, The Panam/Metlife Building, the Twin Towers, and the Citigroup Center were the icons to emerge out of this period.

In the 1980s crisis struck - massive crime rates and depopulation plagued the city. Despite this, development continued in Manhattan. Changes to the skyline became harder to notice because of the density which had already been created. Battery Park City was a notable exception - an entire neighborhood built on landfill next to the WTC. 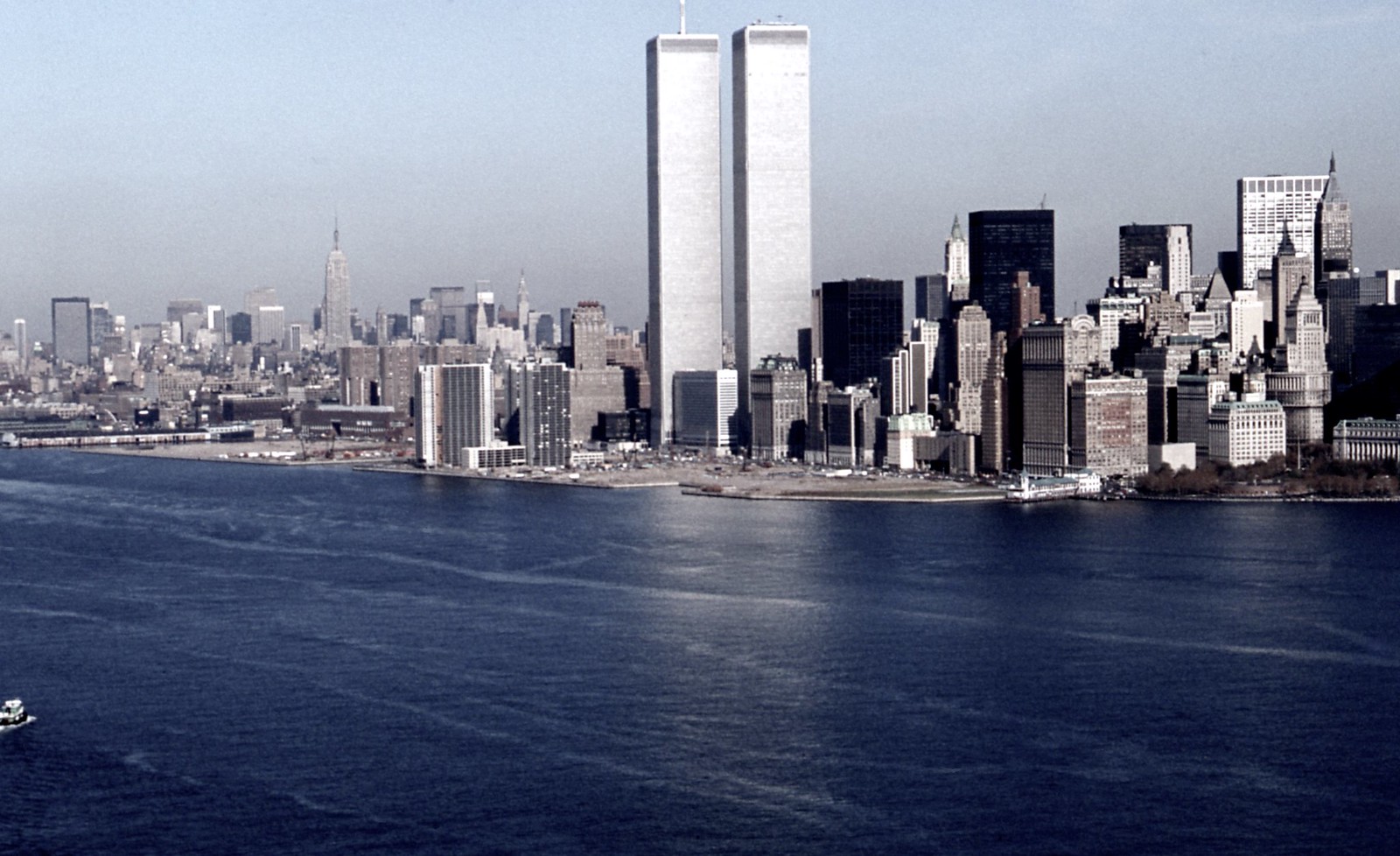 The 1990s were a rebounding period. Crime rates declined by the middle of the decade and gentrification began in earnest - particularly in Times Square. If you were to see the skyline then, you would only notice the absence of a few towers. 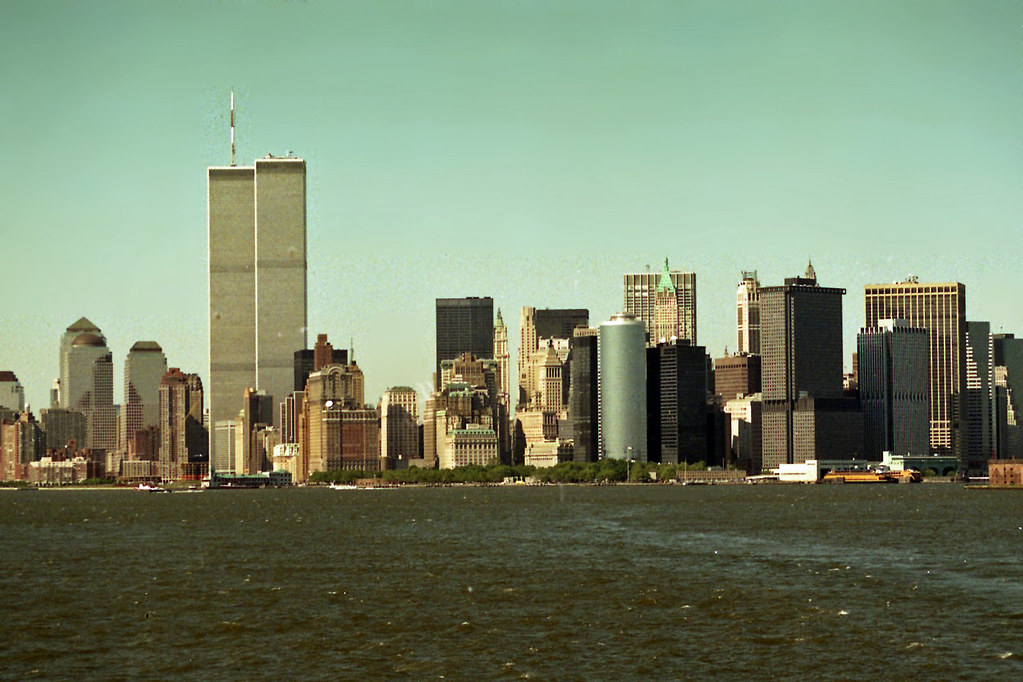 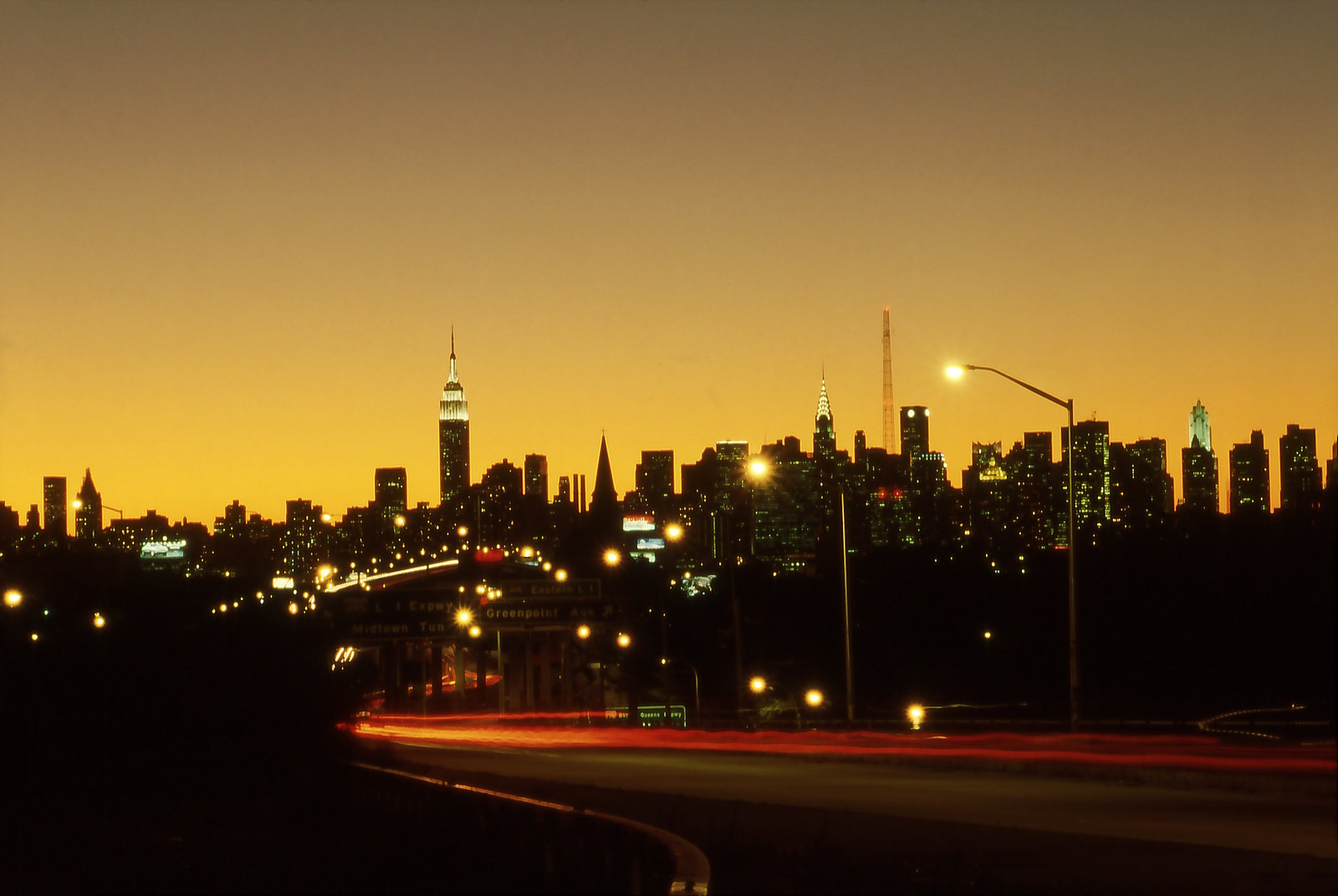 What a lovely photo! It looks like this is from the 40s or 50s. Do you know when this was taken?

looking south towards a nascent skyline, before the Woolworth Building topped out - Before art deco. 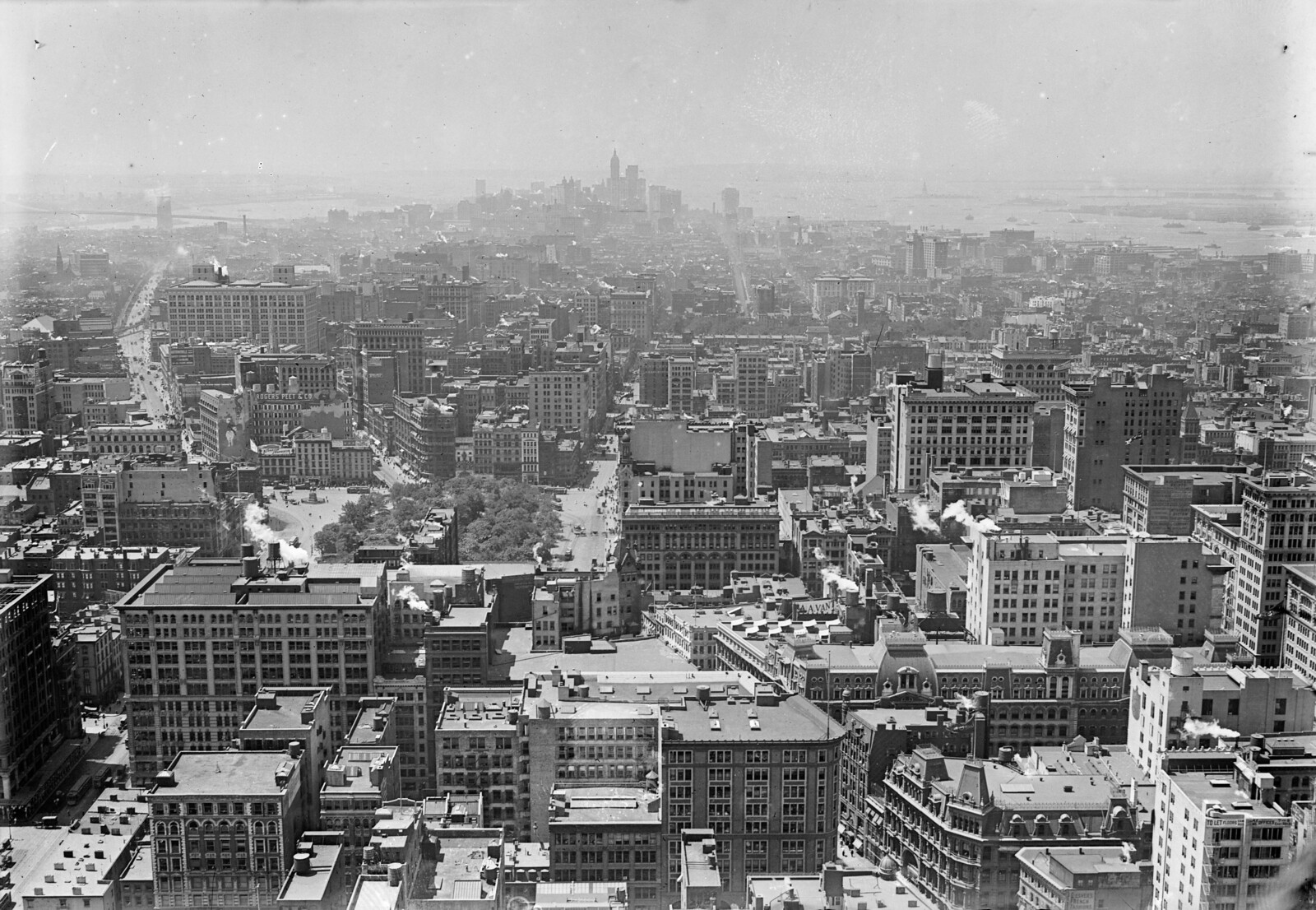 If you stood on top of the Met Life building in 1914 and looked south, you would see the Brooklyn Bridge, Greenwich Village, Lower Manhattan skyscrapers including the new Singer Building, the Statue of Liberty, Ellis Island and Jersey City. Quite a sight! by Andy Blair, on Flickr

circa 1914 - a newly completed Woolworth Building dominates the skyline 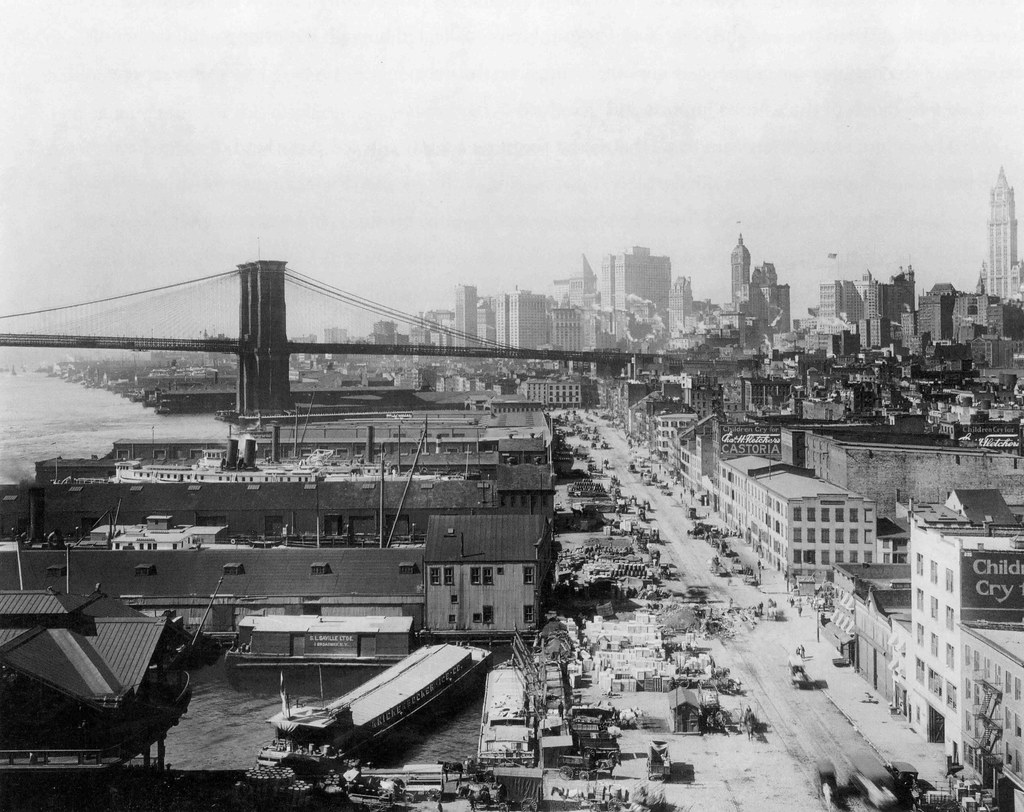 South Street bustling with commercial activity by the piers toward the Brooklyn Bridge. A city of steel, wood and stone. New York. 1914 by Andy Blair, on Flickr

1915 - you see the Metropolitan Life clock tower in the distance. That would be the extent of the skyline of midtown at the time. 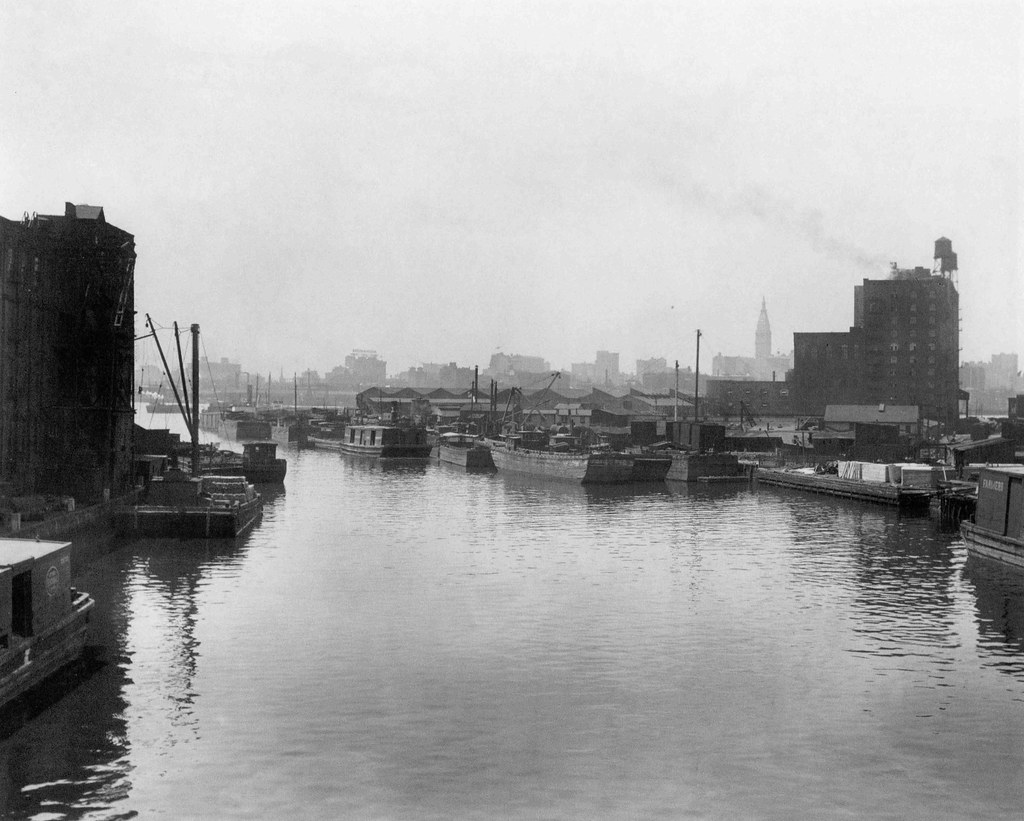 Industrial Newtown Creek in Queens toward Manhattan with wooden boats and barges . New York. 1915 by Andy Blair, on Flickr

Jersey City across the Hudson, 1970s 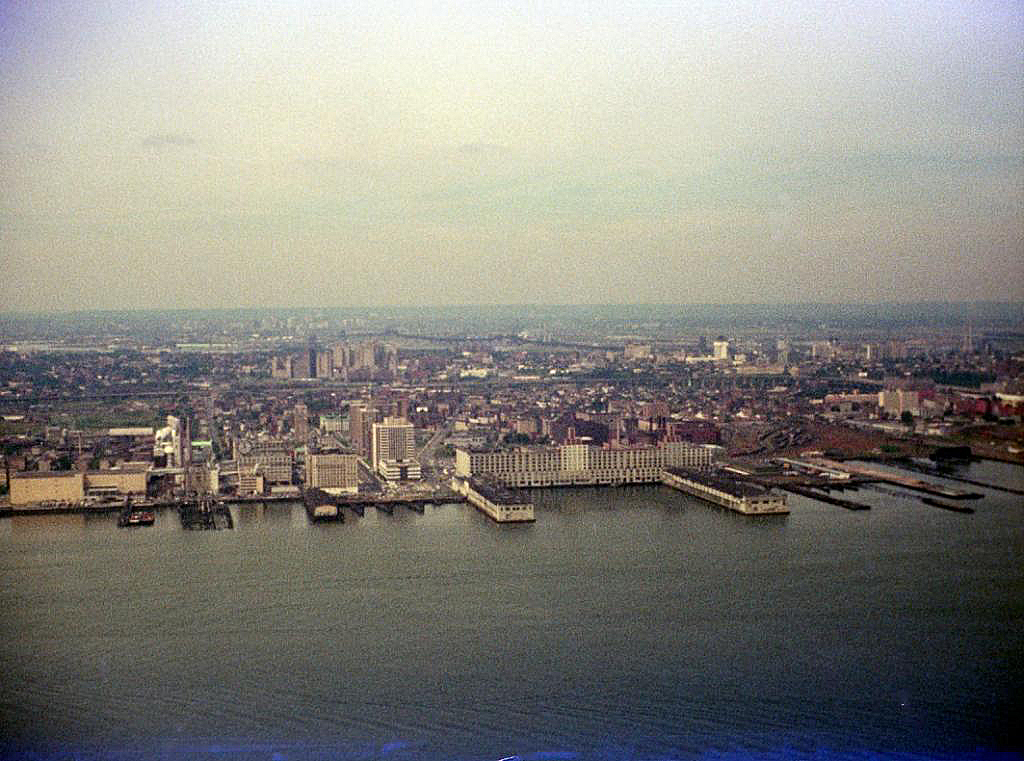 Jersey City panoramic view from my dad's office on the 58th floor of the World Trade Center. April 1974 by Andy Blair, on Flickr 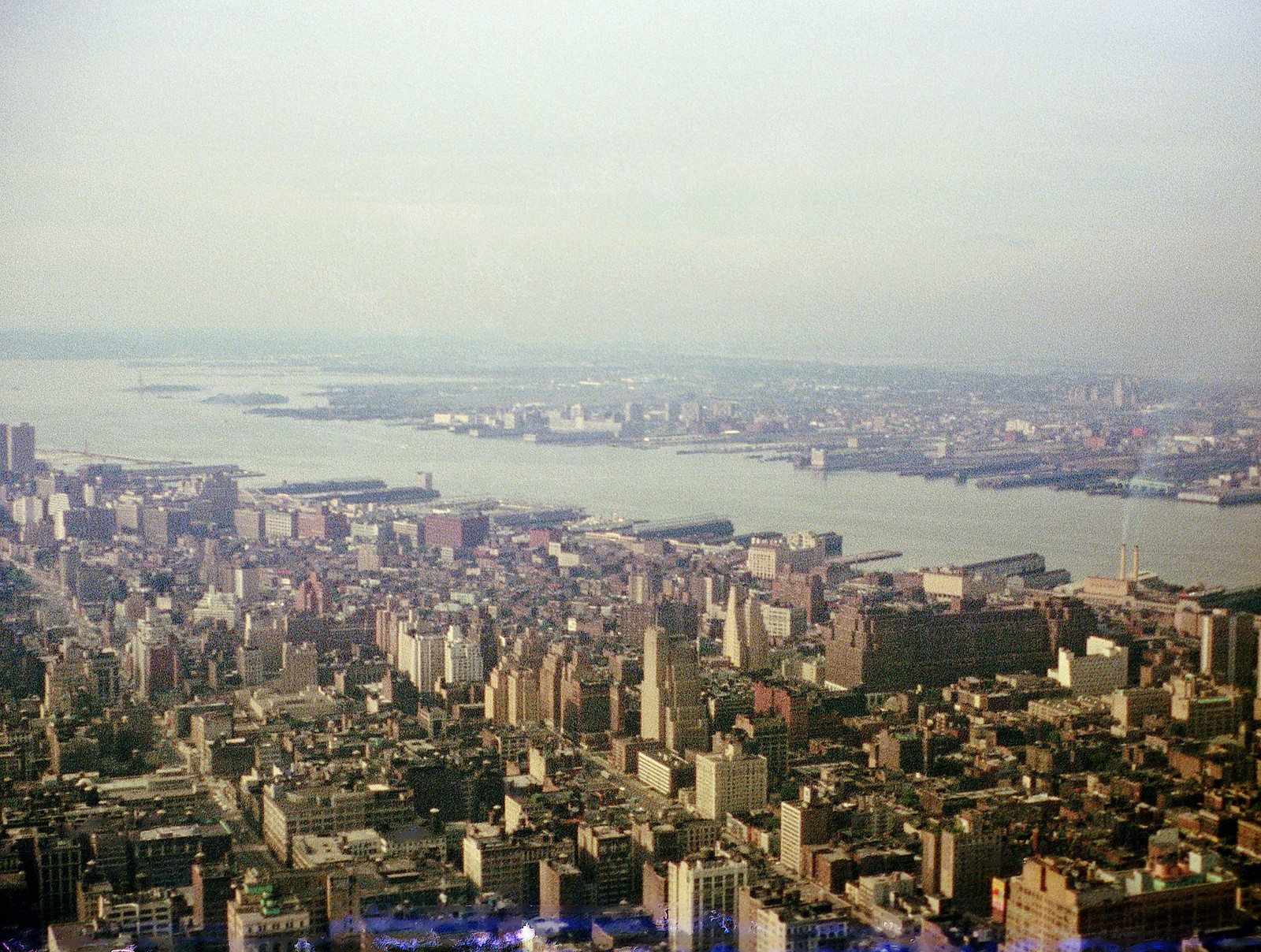 The Lower West Side, Hudson River, industrial Jersey City, the Colgate Plant, the Erie Lackawanna terminal and the Statue of Liberty from the top of the Empire State Building. (a litle smoggy, as was usual). New York. 1975 by Andy Blair, on Flickr 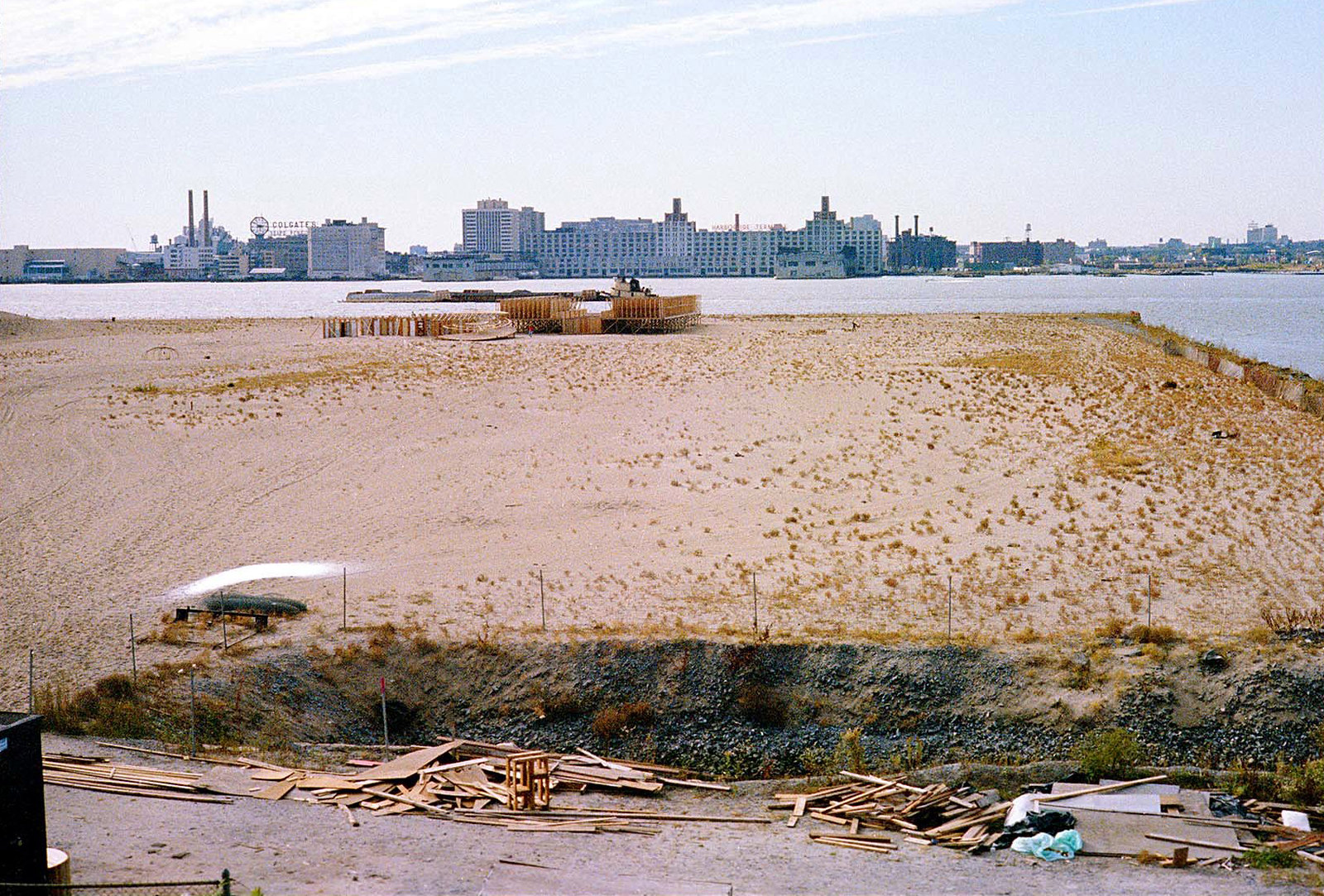 Hanging out on the abandoned West Side Highway looking out at the completed Battery Park City landfill, the Hudson River and the classic Jersey City skyline with the Colgate Plant, Harborside Terminal and the H&M railroad powerhouse. New York. April 1978 by Andy Blair, on Flickr

New Haven CT skyline in 1970 (NYC metro, according to some) 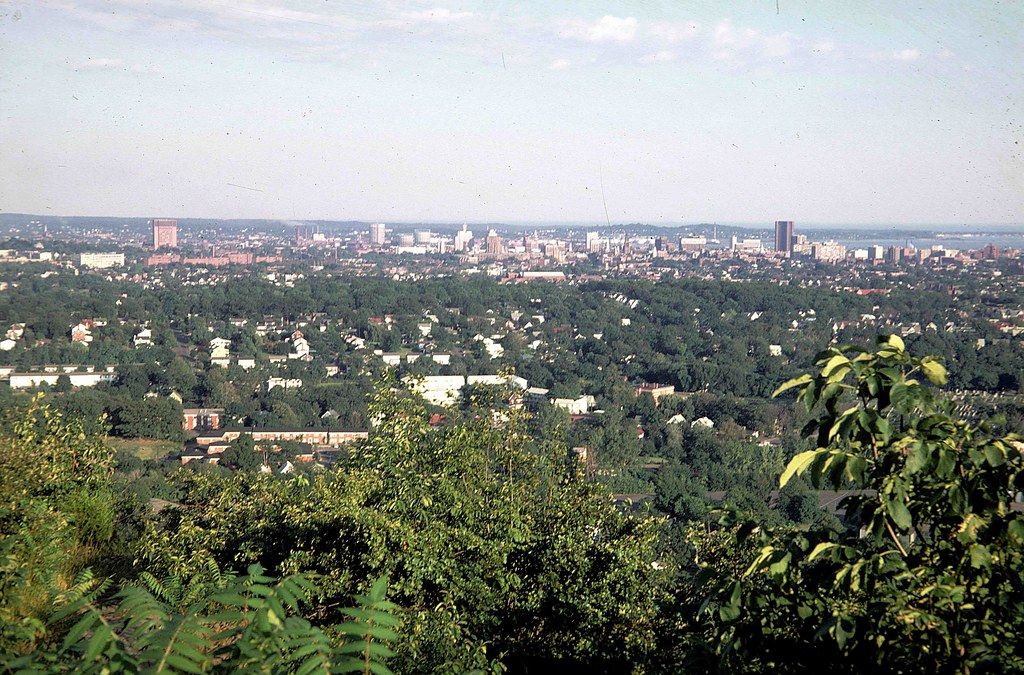 Aerial view of New Haven Connecticut from Hopkins School. The old United Illuminating power plant was smoking away, but no Coliseum existed yet. (view in large size). Aug 1970 by Andy Blair, on Flickr 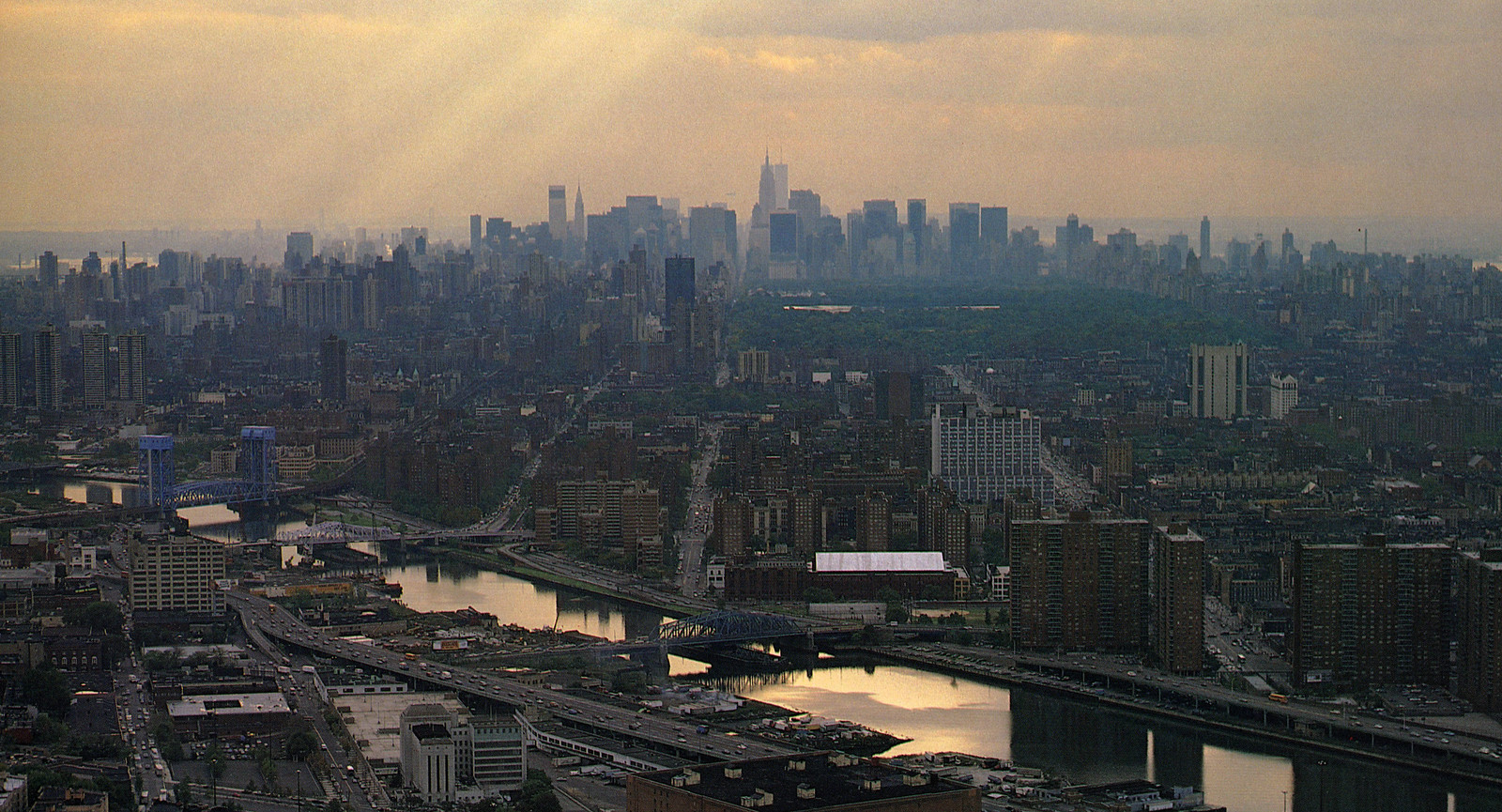 Looking straight down 5th Avenue past Harlem, Central Park, Midtown Manhattan, the Empire State Building all the way to the Twin Towers of the real World Trade Center. The Harlem River shimmers with oil slicks at sunset. New York. July 1984 by Andy Blair, on Flickr

That guys flickr was a treasure trove of awesome vintage nyc 1910, taken from the Singer Building. The view might be a bit different today 1984 With the WTC And WFC Under Construction

I don’t see a lot of pictures of the WFC under construction. Great photos!

before skyscrapers (and car traffic!) in midtown… 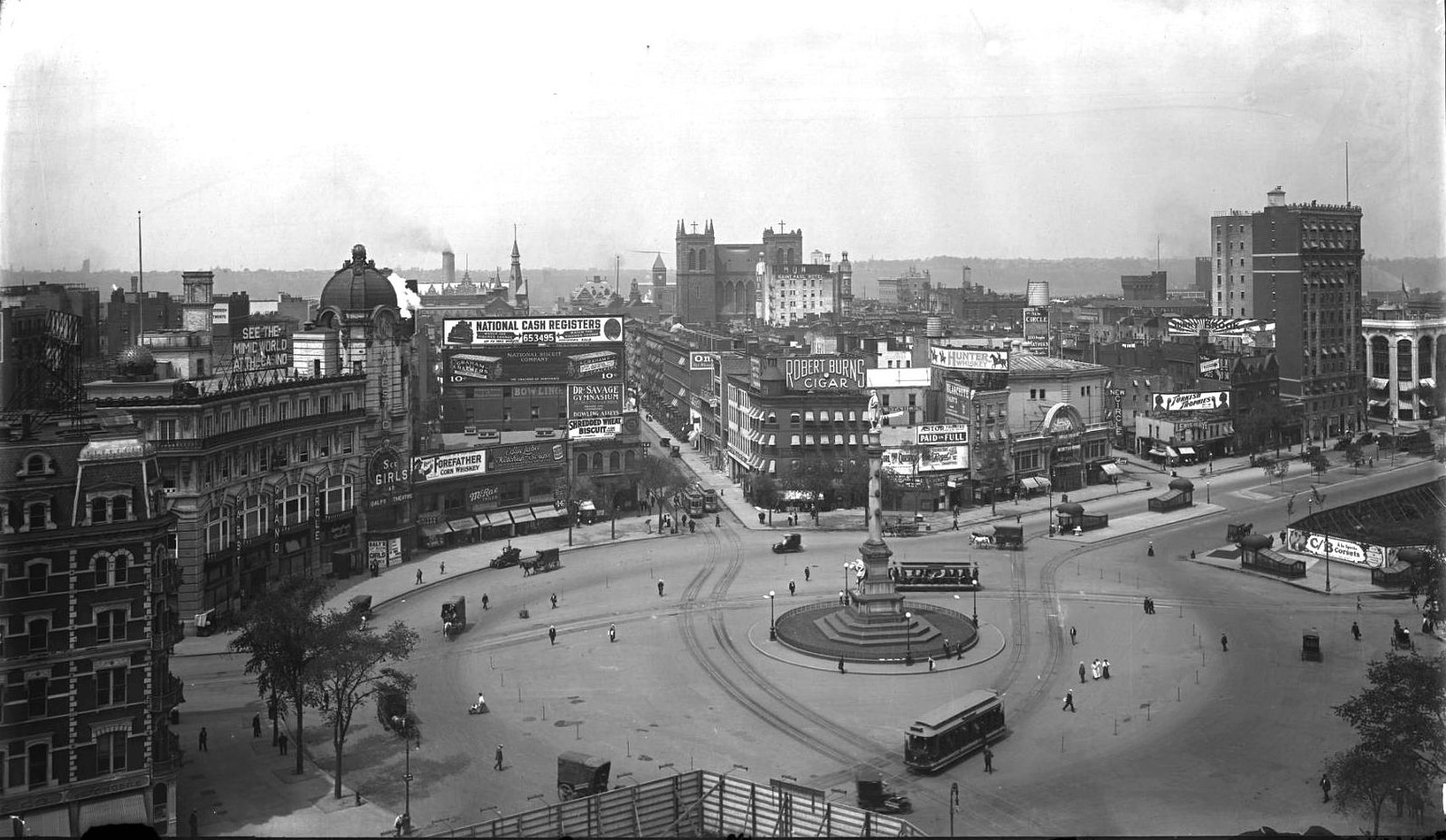 This thread was such a good idea

helicopter footage from the 80s with 7 WTC, The WFC, and One Worldwide Plaza U/C. Pretty neat seeing the copper crowns on the WFC from the air before they turned green. Note the lack of skyscraper density around Times Square.

Has anyone ever seen this?

New York: A Documentary Film is an eight-part, 17½ hour, American documentary film on the history of New York City. It was directed by Ric Burns and originally aired in the U.S. on PBS. The film was a production of Steeplechase Films in association with WGBH Boston, Thirteen/WNET, and The New-York Historical Society. The series was written by Burns and James Sanders and produced by Burns's company, Steeplechase Films. Several noted New York City historians, including Mike Wallace, Kenneth T. Jac...

While it may have some political overtones, overall it is a brilliant piece of work and fascinating to watch. I always imagine being able to take someone from New York in the 1700s and drop them in the city today. I don’t think they would have ever imagined such a massive city would come to pass.

What an amazing picture. I know this one isn’t vintage, but its just so cool to compare that picture to this one, and they’re at the same angle