Partial renderings of Related Companies’ west side tower at 55 Hudson Yards were revealed a few weeks ago, but now more images give us the first full look at the 51-story tower, as well as a peek inside. Designed by Eugene Kohn of Kohn Pedersen Fox and Kevin Roche of Kevin Roche John Dinkeloo and Associates LLC—ages 83 and 92 (!), respectively—the building is a result of Related’s desire to “cultivate a range of aesthetics” for the multi-tower megaproject. Related papa bear Stephen Ross told Kohn, whose firm has the lead on several towers in the development, to bring in an outside architect, and this was the first time the two industry veterans worked together.

The LEED Gold-seeking building’s 10-story base holds floorplates of 44,000 square feet, while the floors in the 41-story tower measure 28,000. A press release says that the tower’s design is “defined by its indoor-outdoor spaces, SoHo, and early modernism.” Roche told the Journal, “The thing I wanted to avoid was another twisted building. Surely there’s a way to design a building that’s simple and straightforward, that meets the needs of the developers and occupants—a basic, fundamental sculpture.” The tower has a terrace on the 10th floor, and private, double-height terraces were “carved” into the building in various locations.

Related plans to start construction of 55 Hudson Yards, which will be located beside the new pedestrian greenway Hudson Boulevard on the block north of the platform over the railyards, once the space is 30 to 40 percent pre-leased, which should be by next January. If all goes as planned, it will be ready for occupancy by the end of 2017.

NEW YORK CITY—Related Cos. is about to ink a 90,000-square-foot lease at 10 Hudson Yards—the building anchored by Coach, L’Oreal and SAP—with “very healthy rent levels," GlobeSt.com has learned EXCLUSIVELY. The company also intends to make a big announcement by year end regarding 55 Hudson Yards, a project on which Related expects to start construction in January.

A Japanese company now controls a key part of the largest private real estate development in the history of the United States.

Tokyo-based Mitsui Fudosan has paid $258.78 million for a 92.09% stake in a proposed office building inside the Hudson Yards project on the West Side, city records show.

Construction is slated to start this spring on the 1.3 million-square-foot, 50-story tower at 11th Ave. and 34th St. — officially called 55 Hudson Yards.

Developers say they have broken ground on a 51-story office tower on Manhattan’s far west side.
Mitsui Fudosan America Inc. said Wednesday it is partnering with Related Cos. and Oxford Properties Group on the 1.3 million-square-foot skyscraper known as 55 Hudson Yards.

The building will be situated on the northeast corner of 11th Avenue and West 33rd Street across from the new No. 7 subway extension.

It will be part of Related’s massive, $15 billion Hudson Yards development.

A. Eugene Kohn of Kohn Pedersen Fox Associates is the design architect for 55 Hudson Yards.
The developers say the building will be ready for tenants in 2017. 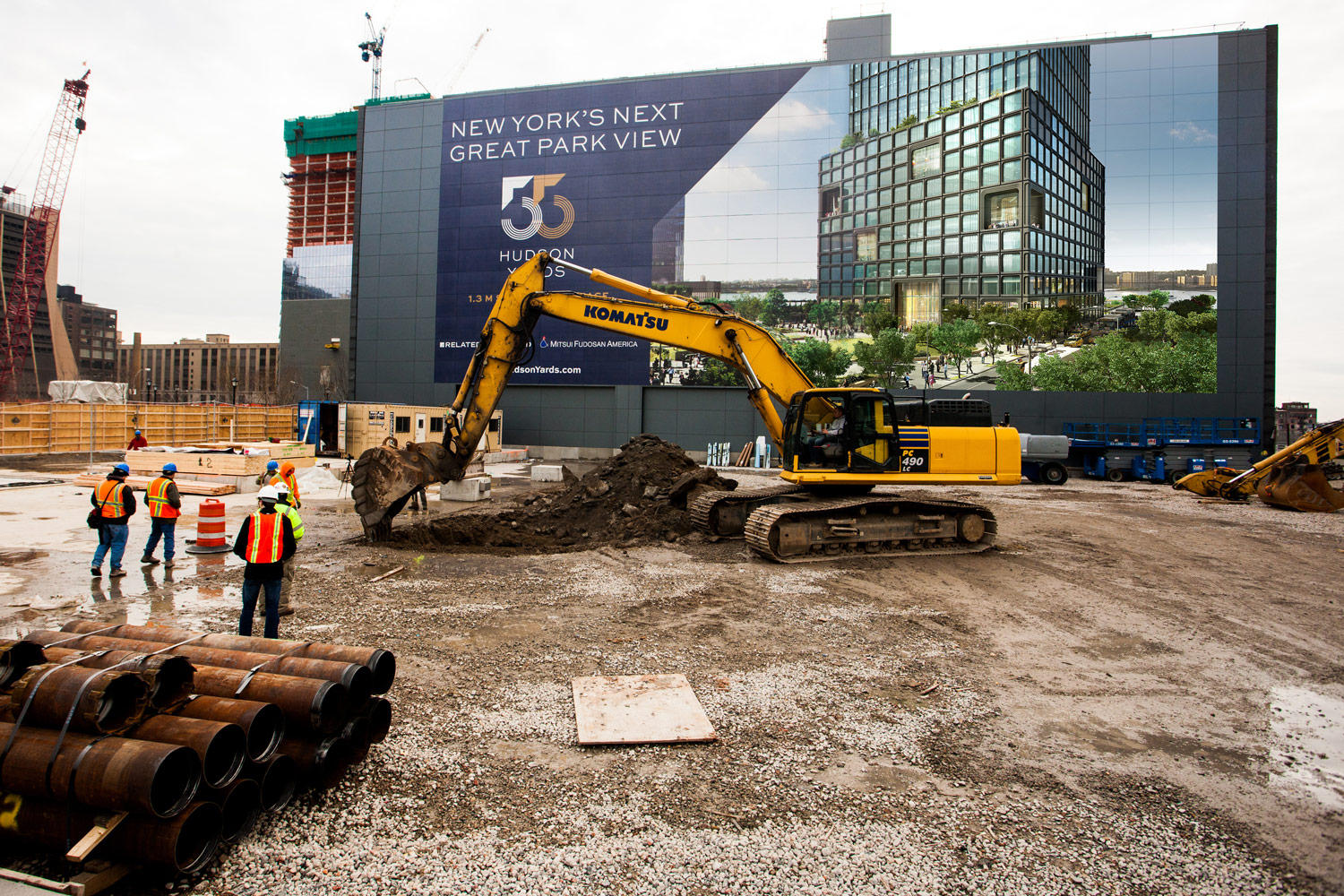 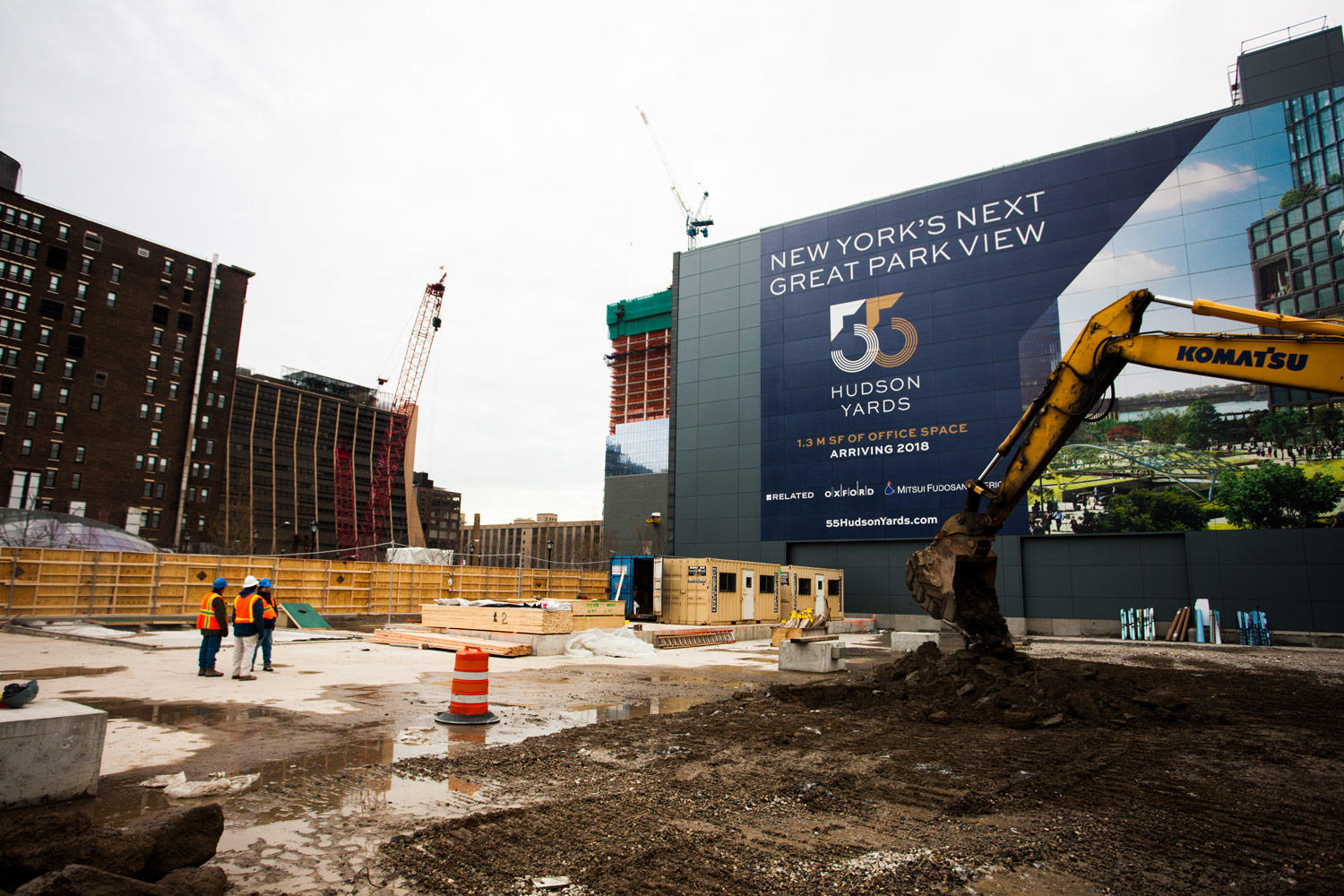 Looks like the walls (for the core?) are starting to rise along with the rebar:

I saw a photo posting on the SSC thread that looks like this may have been stalled. Could anyone here be able to confirm or disprove it?

Maybe it’s due to the Christmas period just ending? Who knows

Surely this has to carry on due to the Japanese companies stake in the project?

Hopefully that’s the case: just a long weekend. Someone needs to go check out the site when they get the chance!

It looks like rebar is visible at ground level.