Related Cos. is eyeing the purchase of a pair of sites close to the elevated park on West 18th and West 19th streets for what would be a record price of more than $700 per square foot.

The Related Cos. is near to buying even more on the far West Side where it is already spending billions of dollars building millions of square feet of new space.

The company is in negotiations to purchase two development sites along the High Line, the elevated park that has become a tourist sensation and attracted some of the priciest new residential development in the city in the last few years.

In the deal, Related will acquire 511-525 W. 18th St., a low-rise garage building directly west of the High Line, and also a parking lot at 500 W. 19th St. that encompasses the full block between West 18th and 19th streets along 10th Avenue and abutting the east side of the High Line. According to sources, the company will pay more than $200 million for the sites, what is thought to be a record price for land in the neighborhood.

The deal mirrors an acquisition made just across West 19th Street by developer Ziel Feldman at the end of 2012, when Mr. Feldman similarly bought up parcels on that block that hug both the east and west sides of the High Line. Mr. Feldman is currently in the process of constructing two towers on the sites. Mr. Feldman, according to reports, paid just under $50 million for those sites, a quarter of what Related is paying.

According to sources, Related is planning to erect a 250-foot tall residential tower on the site west of the High Line. That building can span much of the block, where it will be adjacent to the Frank Gehry-designed IAC headquarters building. To build to that height in the High Line district, which normally caps development at 125 feet, Related will buy neighboring air rights that allow it to build higher.

Sources estimated that Related will pay more than $700 per square foot for the development, what is seen to be the highest amount paid yet for land in that area of Manhattan, where several residential development projects are currently underway.

Related is building huge residential and commercial towers in the Hudson Yards neighborhood at the northern end of the High Line, what is the largest construction project currently underway in the entire nation. 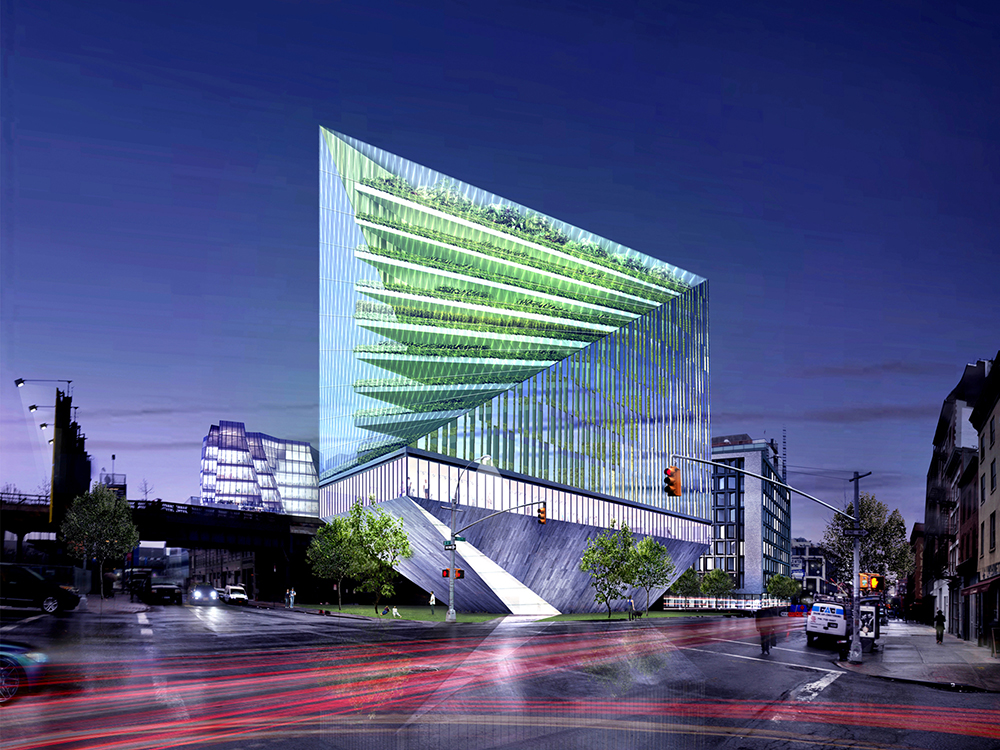 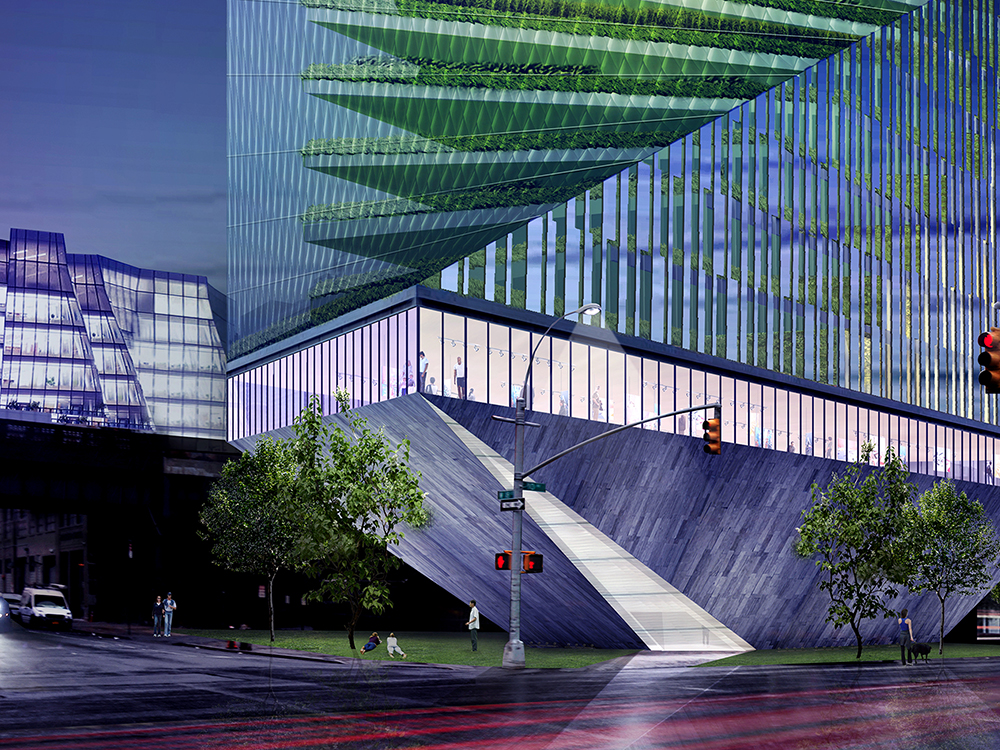 Yet another high-concept green building imagined along the High Line

The High Line has attracted some pretty spectacular building designs from some of the world’s top architects. And it could be getting yet another, this time from the firm Weston Baker Creative.

Renderings of the 12-story structure show a futuristic, angular building at the Rem Koolhaas parcel at 511 West 18th Street along Tenth Avenue, according to 6sqft.

The mixed-use concept would include residences, an art gallery and the kicker: 10 levels of indoor farming terraces. The tower’s concrete base would meet the High Line walkway with a full-floor, glass-enclosed gallery.

“As the sun comes across the sky to the west, the building twists to evenly distribute daylight throughout the day,” according to Weston Baker’s website.

But unlike many of the High Line’s ultra-exclusive developments, this building would have sections that are open to the public, including views of the indoor farm, a public “observation garden” on the top floor and an art gallery on the second floor.

Wow! This is just north of BIG’s project for HFZ on 10th!! Its NB application filed with the DoB in October of 2016 remains pending.

I can’t wait to see what they have planned! This right next to HFZ’s BIG project could be amazing! After getting the nod from City Planning to expand the scope of development projects near the Chelsea High Line, Related Companies filed a "test the

I dont think so yet. But Tec posted some equipment on site from the BIG project thread across the st and now the equipment is all gone. So i guess that was just cleanup.

Anyone have any other info? The massing looks like it could be great. Reminds me of Renzo Piano’s 565 Broome with those curves.

I think that would be fine as is. However, it may be dramatically different. Look at the construction diagram
for HFZ’s project next door.

I wonder what will rise here, I like the original rendering. If there is any place in the city where architects can go bananas it’s the high line, especially here, right next to the IAC building.

I love it. A great addition to the Highline. These are from EB-5 materials (which are ads, they might not reflect the final product) so hopefully the design remains. They do seem to match the on-site massings posted above. Thomas Heatherwick Designs Bubble-Wrapped Condos to Saddle Up Next to the...

As a follow-up to Hudson Yards’ Vessel and the back-on-the-table Pier 55 project, Thomas Heatherwick is to bring another architectural oddity Hopefully the actual buildings will be more attractive than the renderings…