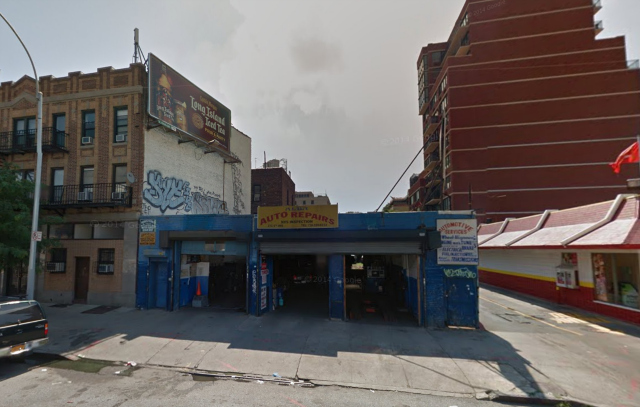 The redevelopment of Fourth Avenue in Park Slope, rezoned in 2003 for residential development, is well underway this market cycle, and we’ve got another project to add to the list: 269 Fourth Avenue, between First Street and Garfield Place.

There, a permit application was filed to construct a new 12-story, 26-unit residential building. The project is planned to sit on a somewhat skewed lot with 100 feet of frontage on Fourth Avenue, just north of a larger residential project designed by ODA Architecture and under development by Adam America Real Estate and Silverstone Property Group. The land beneath No. 269 sold about a year ago for $4.4 million, or a bit over $100 per buildable square foot – a bargain compared to what it would fetch today, though the contract (brokered by TerraCRG) had been inked for some time before the sale closed.

Sunset Park-based U.S. Developments Group, which has built a few projects and has a few more under development along the Fourth Avenue corridor, is behind the filing. The architect is listed as Building Consulting Engineering, led by Tony Onyeagoro.

The project at 269 Fourth Avenue is planned to have 39,000 square feet of residential space, spread over just 26 apartments. Given the fairly large units – the ninth through twelfth floors will each have just one floor-through apartment each – and given where we are in the market cycle, we’re guessing the project will be condos.

The residential units will sit atop a base housing a 750-square foot commercial space and a 2,600-square foot community facility space, which the Schedule A filing lists as a day care facility and eating and drinking establishment, respectively. The building is small enough that the developers dodged the Department of City Planning’s minimum parking requirements, which have regrettable encouraged poor ground floor uses in some new buildings along Fourth Avenue.

Planners did make an attempt to correct the problem by requiring active ground floor uses along Fourth Avenue, but they did not address the underlying issues, which include the parking requirements that forced developers to build the unsightly garages in the first place.

In addition to the parking requirements, which fortunately did not kick in for this project, the M1-2 zoning across the street does not allow housing, and robs the neighborhood of the foot traffic that it would need to sustain the healthy commercial establishments and active uses that politicians and planners claim to want for Fourth Avenue – perhaps explaining why the developer is planning a larger day care center than commercial space. 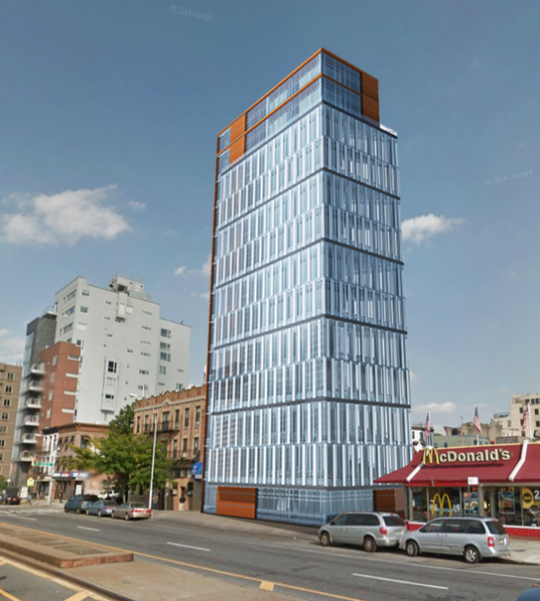 Last January, the Brooklyn Eagle reported that an LLC led by Juneng Zhao bought the lots at 269-271 Fourth Avenue for $4.4 million, or a bit over $100 per buildable square foot – a steal compared to current prices. They are located on the stretch of Fourth Avenue that marks the transition zone between the Brooklyn neighborhoods of Park Slope and Gowanus, and the corridor has seen a construction boom in recent years following a rezoning in 2003 that allowed larger mid-rise residential buildings.

And now YIMBY has the first look at Zhao’s project, which will stand 12 stories and 120 feet tall, and have just over 50,000 square feet of floor space. Aesthetically, the simple glass design will be a notch above much of the neighborhood’s new infill from the last decade, with a clean glass façade. Its verticality – a welcome change for Fourth Avenue, where parcels tend to be larger and buildings therefore bulkier and more horizontal – will be broken up by two-story, horizontal segments, with an orange-colored material, perhaps Corten steel, framing the duplex penthouse on top and the ground-floor lobby.

Just next door, at 275 Fourth Avenue, ODA is designing a 75-unit rental building for Adam America that will be much more ornate, with a wedge gouged from a corner of the building resulting in ample outdoor space for many of its units.

Tony Onyeagoro of Building Consulting Engineering is listed as the architect of record, and the project also includes 762 square feet of commercial space, and 2,627 square feet set aside for a community facility use.

It has not been announced whether the development’s 26 units will be rentals or condos, but given their average size of approximately 1,500 square feet and the lack of PTACs – not to mention – condos would seem likelier. The new building permit was filed in late November, though the project does not yet have a formal completion date.