Behind the Scenes: Park Hyatt Prepares for Opening

Hyatt Hotels Corp. is looking to reintroduce its luxury Park Hyatt brand in the U.S. with the opening this month of a new flagship property in midtown Manhattan. In these photos, staff go through final training.

Took a pic while shopping: 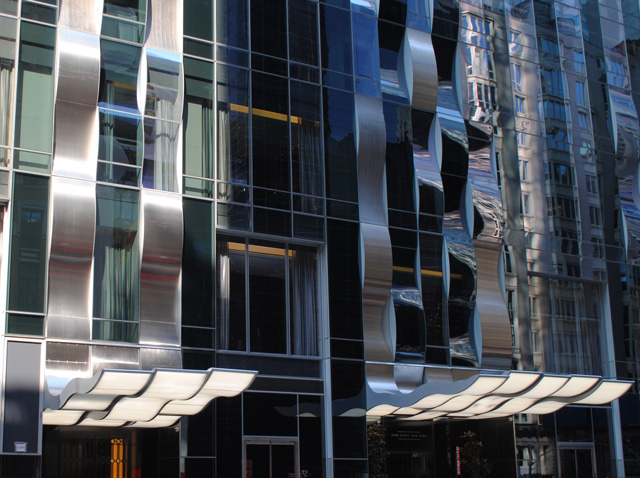 Fencing has finally peeled away from the lower levels of New York City’s first residential supertall, and after years of Sandy-related delays, One57 has become part of the streetscape. The building has both condominiums and a Park Hyatt hotel, with separate entrances for the two components. 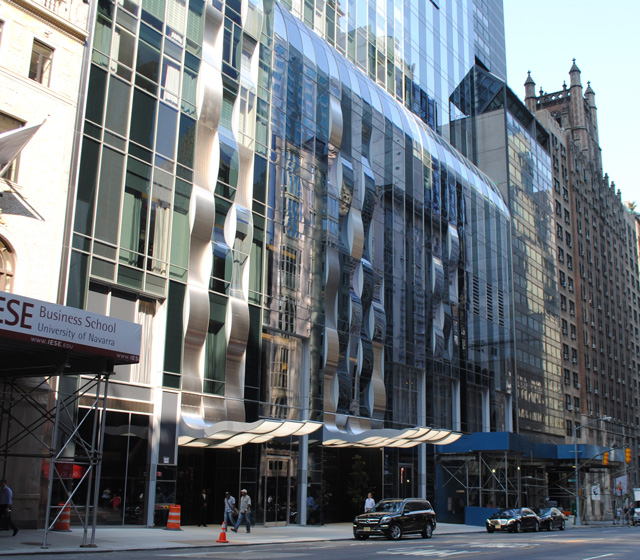 One57; condo entrance under left ‘swoop,’ Park Hyatt under right

When viewed from the street, the ends of the supposedly waterfall-like facade become the building’s most noticeable feature, as they cascade into the pedestrian sphere. The end result is nowhere near as fluid as its apparent inspiration, but the stiff feeling could also be blamed on the lack of any retail, which is especially out of character for the emerging 57th Street corridor. 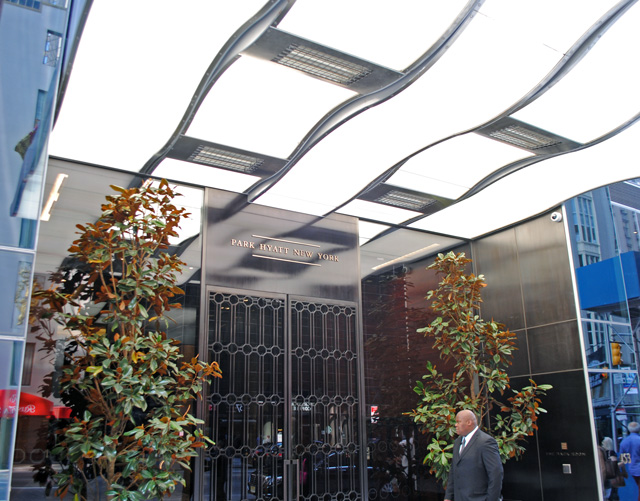 Both 432 Park and 217 West 57th Street will have substantial retail components — with the latter holding Nordstrom’s New York flagship — thereby avoiding any deadening effect on the neighborhood. People may complain about empty skyscrapers, but the aforementioned will contribute to both the skyline and the streetscape in major positive ways, contrasting One57′s failure to engage pedestrians. 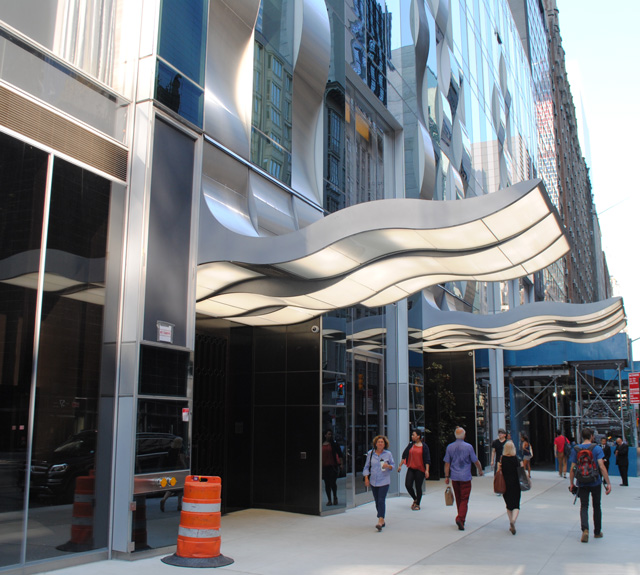 Besides problems at the ground level, One57′s facade has also turned out markedly different from renderings, where it was depicted as dynamic, silvery, and shimmering. While the tower is not ugly, the ventilation grills sprinkled along the uppermost floors seem to be placed arbitrarily, and detract from the glass. 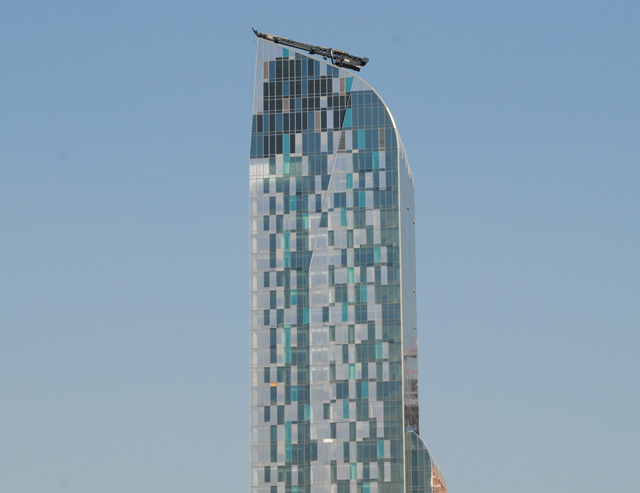 The silver stripes that flow into the 57th Street entryways are attractive, but the western and eastern facades are not nearly as cohesive. The size of individual panes prevents a truly mosaic-like appearance, and instead, the different shades of blue seem to clash against one another, especially as hues nearly span to turquoise. Still, as long as it is viewed from a distance, its design can be appreciated. 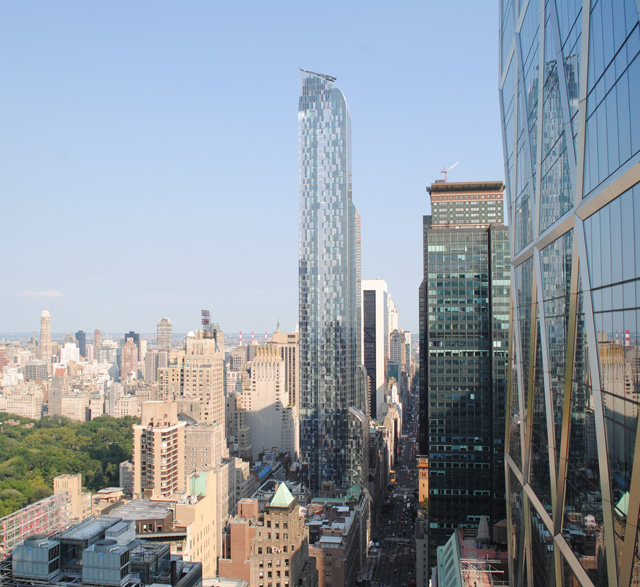 One57, crane for 432 Park Avenue poking up to the right

Despite its problems, One57′s footprint is minor enough that its impact on the block will not be incredibly significant, especially as the goalposts for New York’s most lucrative retail shift west, all the way to Broadway, with the 2018 opening of Nordstrom. Pedestrian activity along 57th Street will soon surge, and the decision to forego any retail component at One57 may soon look short-sighted.

Extell is the developer, Portzamparc is the architect, and the building stands 1,005 feet tall.

I appreciate MrVenaCava’s article on August 29th mentioning the shortcomings in this hideous structure. The patchwork facade resembling a 1980’s airplane seat is as unattractive as this too tall building that emphasizes height rather than style. One must assume 157 West 57 aimed for its generic stylings as a goal to dethrone midtowns glorious skyline, why else build something so unattractive without even a hint of sophistication.
Congratulations are in order Atelier Christian de Portzamparc and SLCE Architects
Mission accomplished… 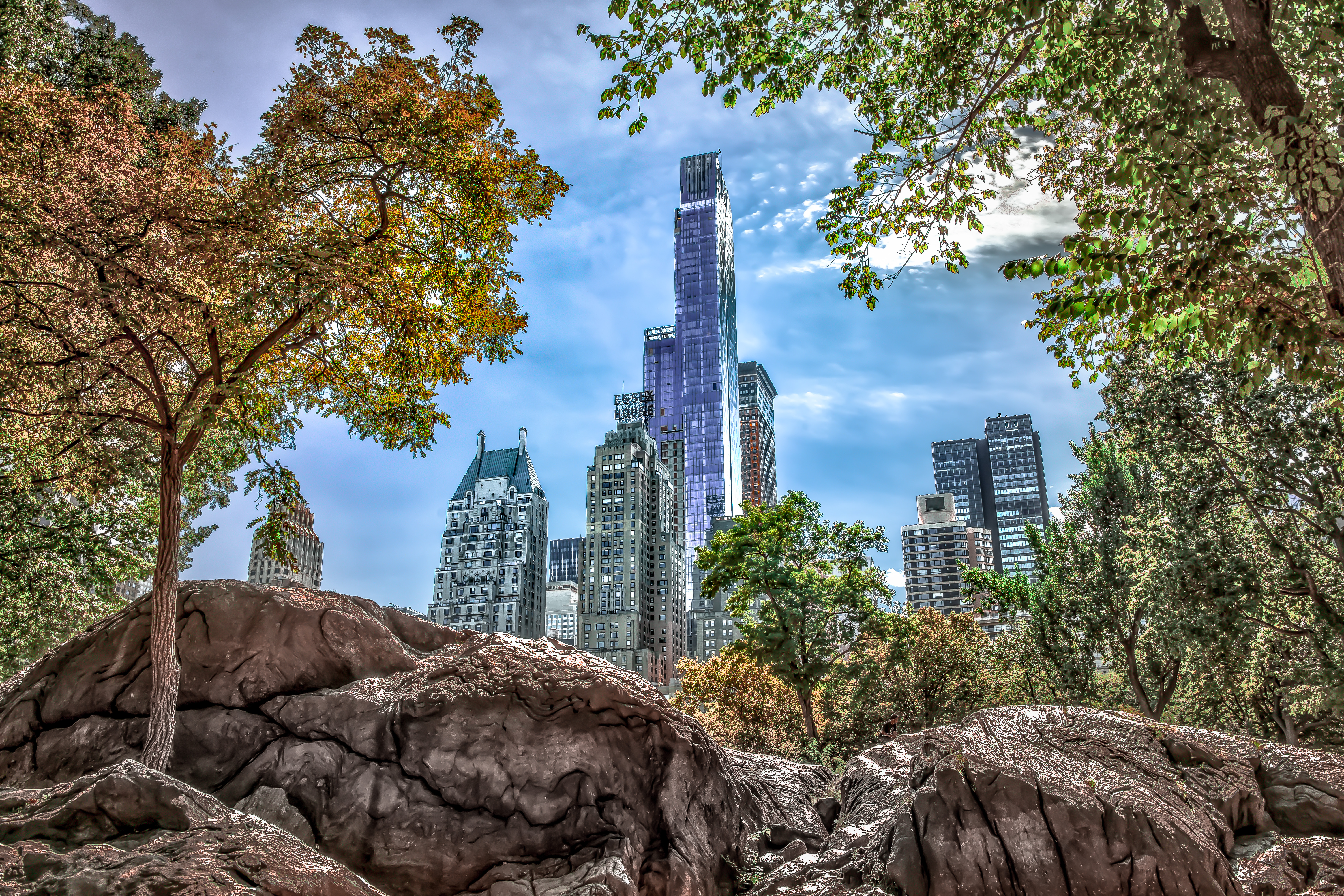 Taken by me, from the zoo! 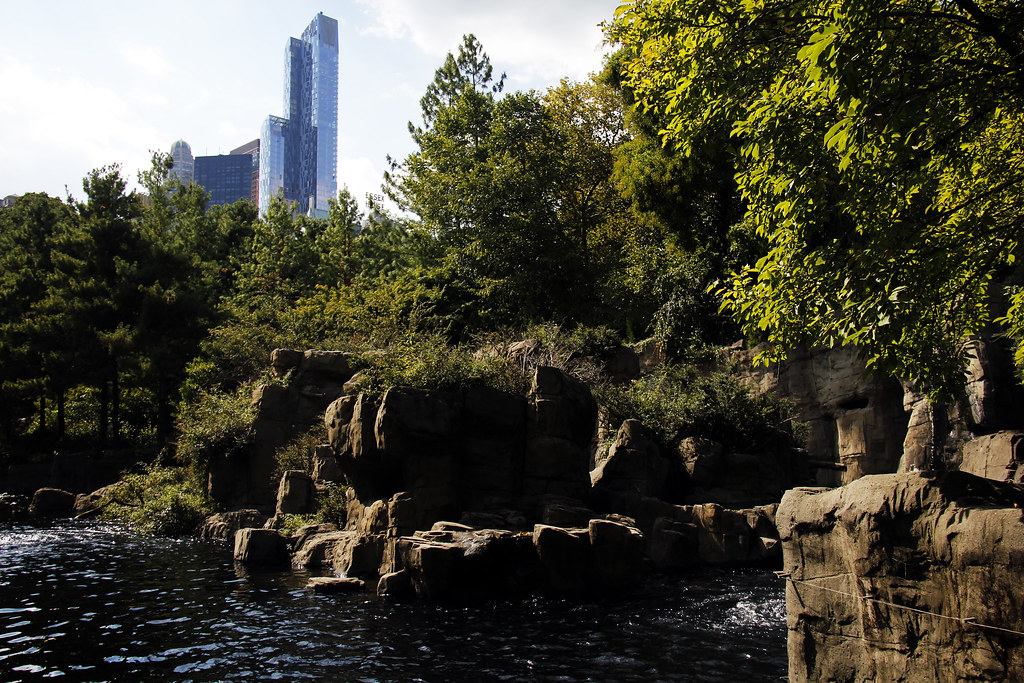 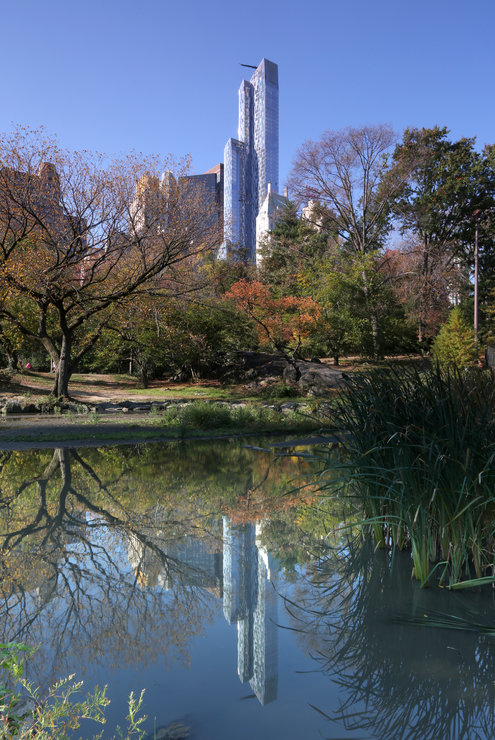 A full-floor aerie near the pinnacle of One57, the Extell Development Company’s 90-story Midtown tower with glass curtain walls that capture 360-degree views of the city and beyond — the Catskills and the Atlantic are part of the scenery on a clear day — sold for $56,079,298.25 and was the most expensive sale of the week, according to city records.

The monthly carrying costs for the 6,240-square-foot condominium, No. 82, are a relatively non-stratospheric $12,212, thanks to a tax abatement obtained by the sponsor.

The four-bedroom five-and-a-half-bath residence is one of 11 full-floor units among the 94 apartments in the brash bluish spike, located at 157 West 57th Street and designed by Atelier Christian de Portzamparc, the French architect who made a more slender skyscraper statement at the LVMH Tower just

…A private 24-by-17-foot foyer off the elevator connects to an enormous reception gallery that runs 75 feet from the north (with direct Central Park views) to the south, where it ends at a sitting room.

“The apartment was designed to have as many open spaces as possible.” said Jeannie Woodbrey, a senior sales executive for One57. “If you’re in the sitting room facing south toward the Empire State Building, all you do is turn around and you can see straight through the gallery to the park. The views are totally dramatic, is the only way to describe it.”

Sales at One57, the ultra-luxury Manhattan condominium tower that set off a high-end residential construction boom, have slowed to a trickle amid competition from newer properties reaching the market.

Only two units at Extell Development Co.’s Midtown property went under contract this year through June 30, according to filings on the Tel Aviv Stock Exchange, where the company sells debt to investors. There were no sales in the final three months of 2013 at the building, which had earlier found buyers for two penthouses at more than $90 million each. About 25 of the 94 units on the market were unsold as of June 30, the filings show.

“This is not a normal pace,” Jonathan Miller, president of New York-based appraiser Miller Samuel Inc., said in an interview. “This building had many price increases when it was the only building out there, so maybe they overdid it. In other words, the sky is not the limit.”

The slowdown at One57, the 1,004-foot (306-meter) tower piercing the sky near the southern end of Central Park, indicates buyers are pulling back on deals at buildings already on the market in anticipation of more choices for new super-luxury homes. At least six residential properties aimed at multimillionaires, including Zeckendorf Development Co.’s 520 Park Ave. and Vornado Realty Trust’s 220 Central Park South, are under construction in or near Midtown, with plans to begin sales in the coming year.

Extell also sold its stake in the 210-room Park Hyatt to Hyatt Hotels Corp., rather than keeping a 33.33 percent interest as initially planned, filings show. Hyatt in an Aug. 5 statement said it acquired the entire hotel for about $390 million.

Extell declined to comment on the sale of the hotel stake to Hyatt. The Chicago-based hotel operator bought the property because of its prominent location in a top market, which will boost the brand’s visibility, said Jamie Rothfeld, a Hyatt spokeswoman.

The Park Hyatt’s opening may be the marketing jolt that helps Extell sell the remaining apartments above it, according to Olshan.

“If you’re really rich, you’re thinking, ‘This is a good place to park my money and I don’t have to wait around for the other stuff to be built,’” Olshan said. “It’s new, and it’s done.”

This tower is now complete.

A Cornucopia of Views 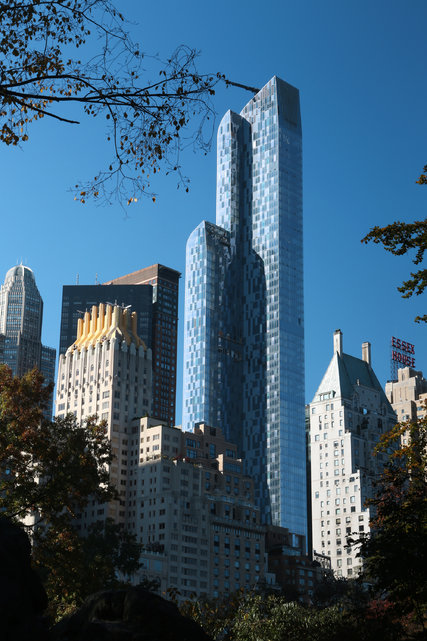 The allure of an entire floor with bird’s-eye views near the top of One57, the Extell Development Company’s glass-sheathed Midtown statement-maker at 157 West 57th Street, continued to persuade buyers to invest upward of $50 million in personal aeries there, as No. 80 traded for $52,952,500 and was the most expensive sale of the week, according to city records.

The monthly carrying charges for the 6,240-square-foot apartment, which is one of just 11 floor-through simplexes at One57, are $12,050. Its upstairs neighbor at No. 82, designed from the same template and possessing similar custom flourishes by Thomas Juul-Hansen, was widely reported to have been sold recently to the apparel billionaire Silas Chou for just over $56 million.

The four-bedroom five-and-a-half-bath residence, all of it contained by curtain glass walls that provide spectacular views of Central Park, the Hudson and East Rivers and a cornucopia of city landmarks, is dominated by a 75-foot-long entrance gallery that runs south to north and culminates in head-on views of the entire park. The 57-by-26-foot grand salon, another of the designated entertainment spaces, has three exposures, as does the sumptuous master suite, with its east, south and northerly views. The kitchen, by Smallbone of Devizes, adjoins a 27-by-17-foot breakfast room.

“You’re in another world up there,” said Jeannie Woodbrey, a senior sales executive for One57, where more than 80 percent of the 94 units in the bold blue tower designed by Atelier Christian de Portzamparc are spoken for.

Why the Doorman Is Lonely 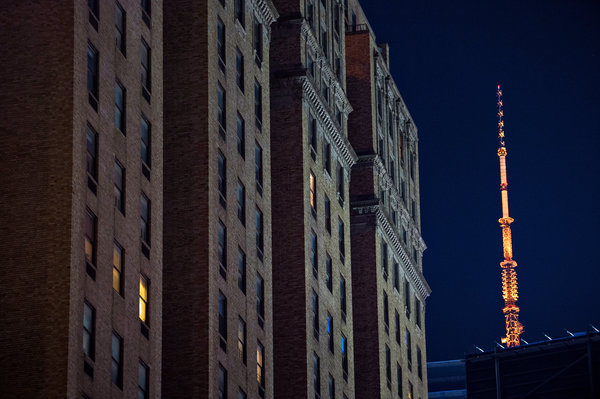 Executive Plaza, at 150 West 51st Street, has the highest percentage of nonprimary residences of any building in New York, 74.4 percent. Credit Joshua Bright for The New York Times

The marble lobby at CitySpire, a skyscraping 72-story tower in Midtown, bustles with rushing people bundled against the cold. Nattily dressed doormen hail taxis and see to a constant stream of deliveries.

Yet the mixed-use building — the first 23 stories house offices — is not as crowded as it appears. CitySpire, at 150 West 56th Street across from Carnegie Hall, is one of the least occupied buildings in Manhattan, with more than 60 percent of its residential floors made up of investment properties and pieds-à-terre, according to data from the New York City Independent Budget Office.

The issue of occupancy in New York City has become a hot-button topic in recent months, with much made of foreigners who buy expensive apartments to use for just a few weeks a year. Some argue that they drive up prices, while others bemoan the fact that these buyers do not pay personal income taxes. A bill has been introduced in Albany that would impose an annual pied-à-terre tax on properties worth $5 million or more. 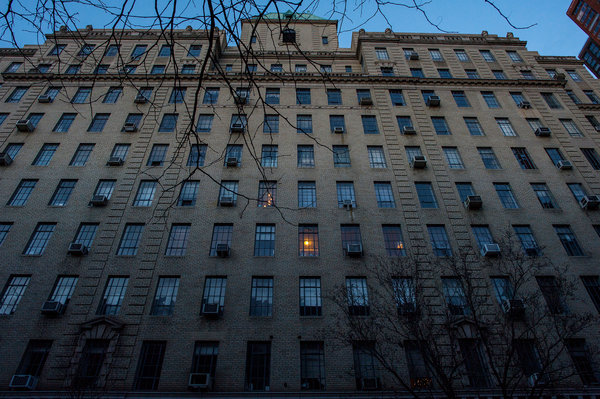 The Parc Vendôme has a high percentage of pieds-à-terre and other nonprimary residences. Credit Joshua Bright for The New York Times

As a tenant at CitySpire, Nicholas Richards has a front-row seat on a pied-à-terre-packed building. “If you pay attention to the lobby on a Friday or a Monday, you’ll see a lot of key exchanges taking place and people with suitcases coming and going,” said Mr. Richards, who rents a studio in the building, returning home to Boston on weekends.

“Twenty-four percent of co-op and condo apartments citywide are not the primary residence of their owners,” said George V. Sweeting, the deputy director of the budget office, who oversaw the research. “Not all of these units are pieds-à-terre; many are likely owned by investors or original sponsors renting out the units.”

The data the budget office used is based on the New York City co-op and condominium tax abatement, which the city began restricting to primary residences in recent years. The agency compared the number of apartments that received the abatement in 2012 to the number that received it this fiscal year to determine its results.

The figures may be underestimates, since the agency did not include apartment buildings that receive 421a tax exemptions, which leaves out some more recently built condos that are widely known to have high concentrations of foreign buyers, including One57 and 15 Central Park West. 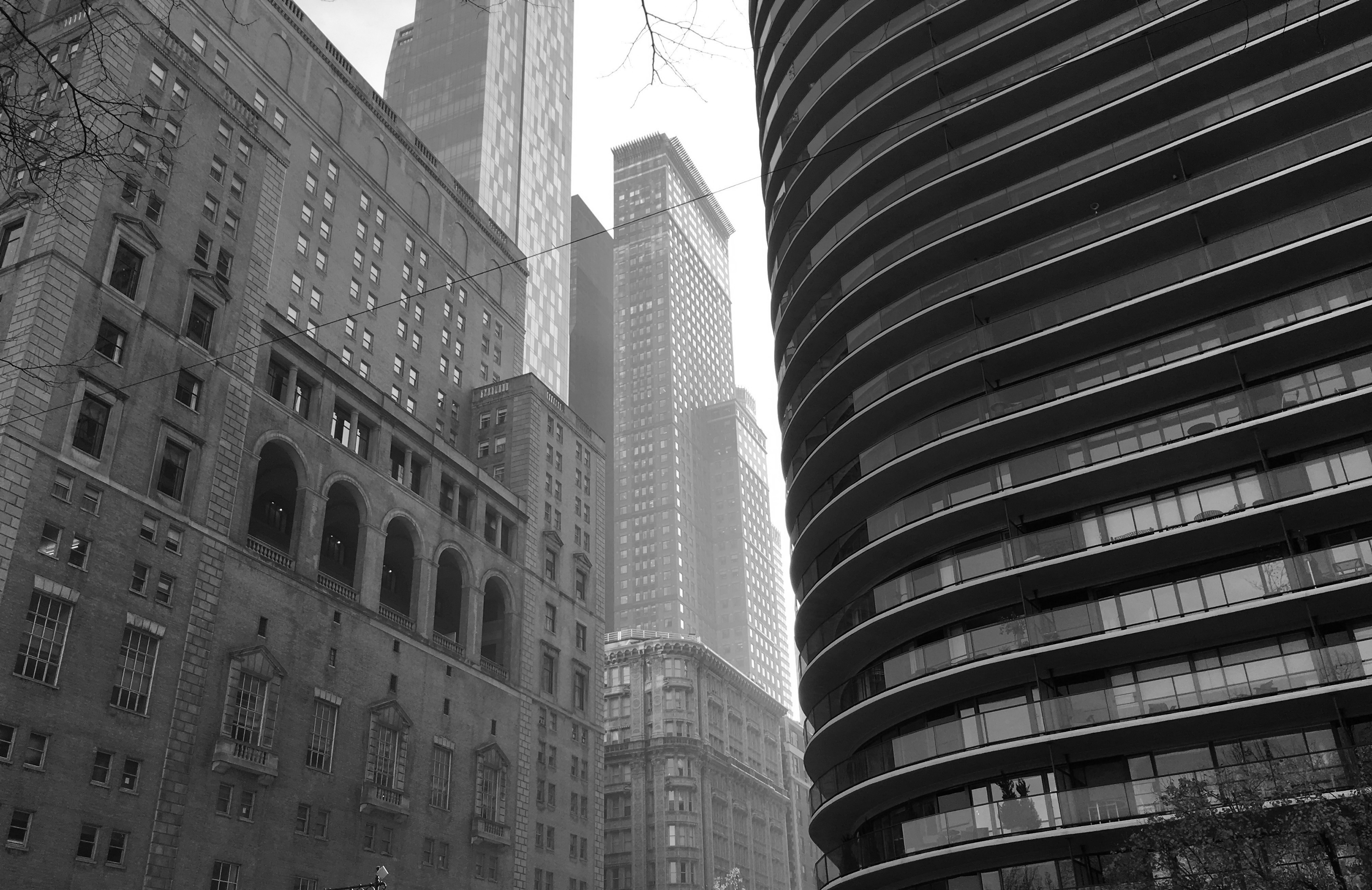 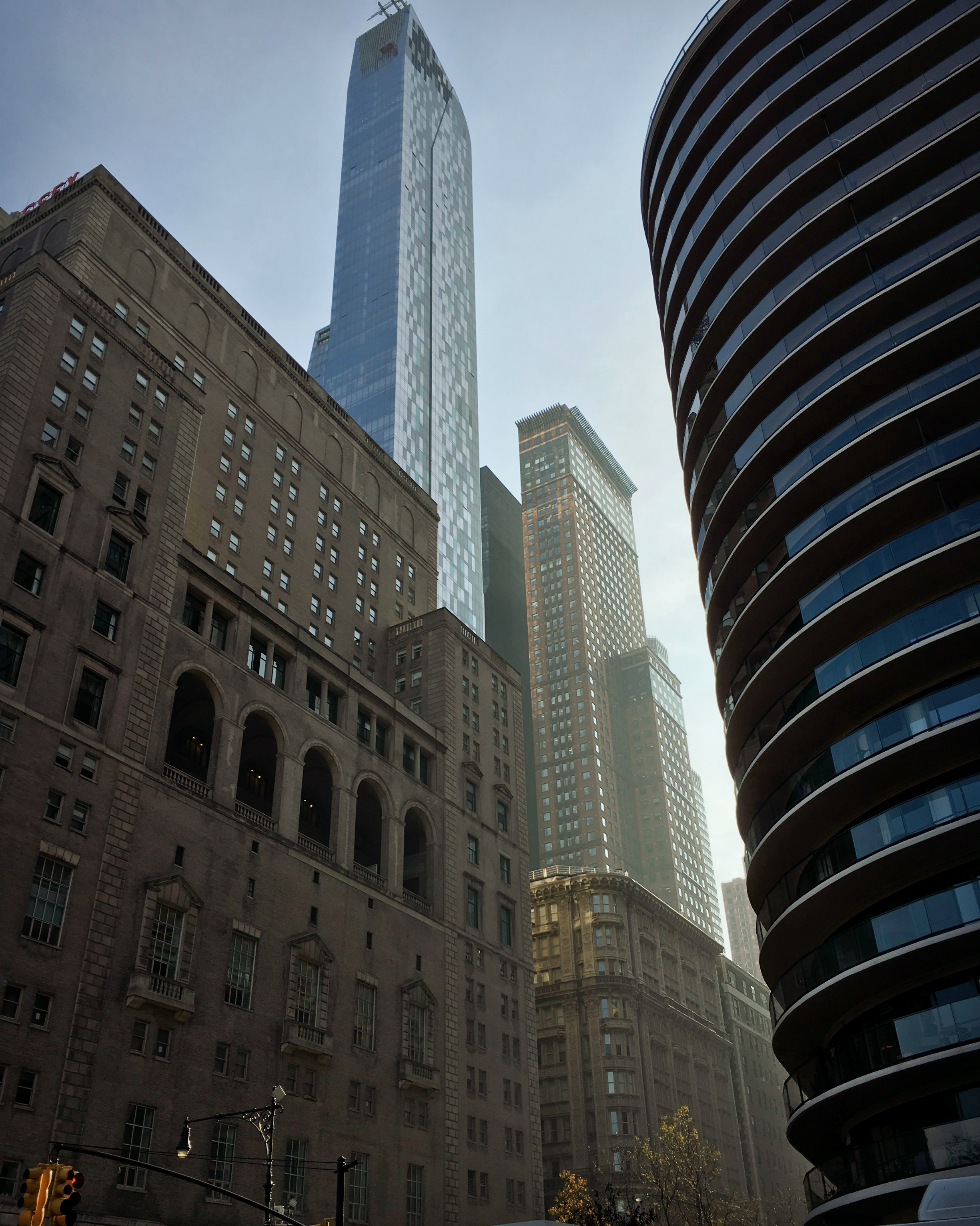