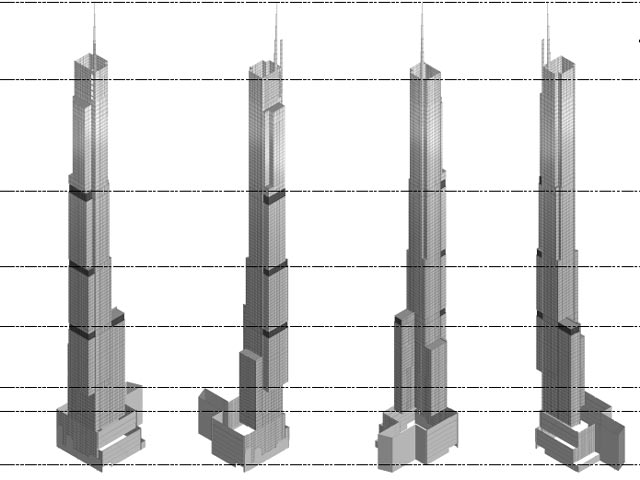 YIMBY has the latest drawings of Nordstrom Tower, courtesy of an anonymous tipster close to the project. Scoping documents also include the actual height numbers: 225 West 57th Street‘s facade will top-out 1,479′ above street level, while a surprise spire on top will cap the tower at 1,775 feet. Adrian Smith and Gordon Gill are designing the building.

Diagram of the Nordstrom Tower’s roof and spire, 1,775′ up

New York City’s skyscraper boom is entering unparalleled territory, and 225 West 57th Street could very well represent the crest of the current wave, assuming the tower is financed. The new height details will result in several superlatives: Manhattan will finally retake the ‘tallest roof’ in the United States from Chicago’s Willis Tower, which stands 1,451′, and 225 West 57th Street will become the tallest residential building in the entire world, surpassing both 432 Park Avenue and Mumbai’s World One Tower.

Structural drawings indicate the curtain wall will be accompanied by steel fins and aluminum louvers, and the result should become a contemporary icon on the Manhattan skyline. The talented Otie O’Daniel created 3D models of the tower based on the drawings and schematics, which give better insight into the building’s eventual appearance — though the images are not official renderings.

225 West 57th Street’s design has seen modifications since vague renderings were presented to Landmarks during the debate over the tower’s cantilever, which will rest over the historic Arts Students League. Additional protrusions have been eliminated, and the ultimate design appears to be far sleeker than the original proposal.

Even the cantilever appears to be well-integrated, adding additional heft to the stem of the actual tower, which rises after several setbacks in a style befitting the wedding cake-shape of Manhattan’s traditional skyscrapers. The result is aggressive, and the tower’s ultimate pinnacle will stand over 300 feet taller than any other manmade objects in Midtown, piercing the nascent plateau emerging around the 1,400-foot mark.

In terms of contemporary comparisons, the design looks to draw from Smith + Gill’s Trump International Tower in Chicago, which is also replete with setbacks and ends in a distinctive but far shorter spire; indeed, it almost looks like a merger between Trump and Willis, though the notched indentations at Nordstrom will be far less intrusive than the setbacks on the former Sears Tower.

Extell’s latest development will have a collection of superlative titles, but its (hopefully) imminent rise underscores the velocity of New York’s general ‘supertall’ boom, which is now the most impressive on the planet. In Midtown alone, other supertalls on the near-horizon include 111 West 57th Street, 432 Park Avenue, 53 West 53rd Street, 3 Hudson Boulevard, 30 Hudson Yards, and 35 Hudson Yards, all of which are already under construction or on their way.

While the Nordstrom Tower’s roof height will be the tallest in the Western Hemisphere, its pinnacle will fall one foot shy of One World Trade Center’s, which begs the question of whether Extell could simply add a few dozen feet to snatch the crown. Such a feat would not be unprecedented, and what ultimately signals resilience is continued progress; instead of deferring to the “Freedom Tower,” 225 West 57th Street should surpass it, returning the title of Manhattan’s tallest building to Midtown on a more permanent basis.

Completion of 225 West 57th Street is currently slated for 2018, and the most recent permits — which were partially approved on July 1st — reveal a total scope of over 1.2 million square feet. 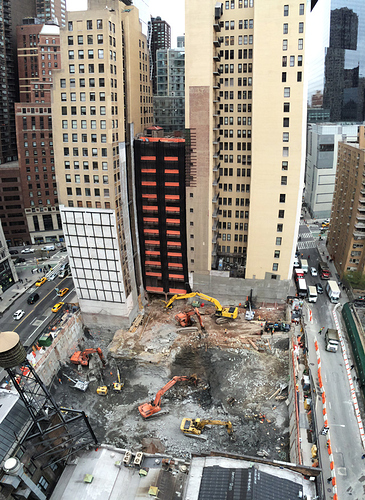 Excavation is making major headway at 217 West 57th Street and 220 Central Park South, which are being developed by Extell and Vornado, respectively. The towers are situated across the street from one another, making for an impressive amount of construction in a very confined area. The Nordstrom Tower’s architects are Adrian Smith + Gordon Gill.

Besides the equipment on-site, blasting is also underway for 217 West 57th Street, with regular explosions carving out the bedrock underneath the site; given the tower’s pit will eventually reach 80 feet below street level, a significant amount of work remains before normalcy can resume. In the race to the bottom, it seems as though 220 Central Park South has the advantage, given its smaller overall scope. 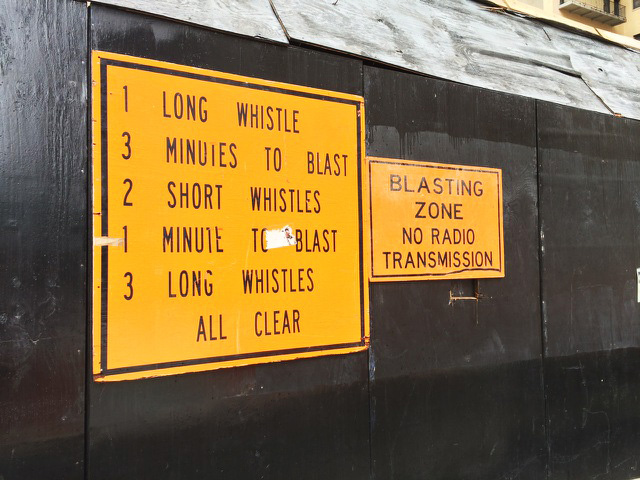 This is a stunning tower! Nice work Yimby!

It’s so nice to post about this tower without enduring the stupidity of putzes with NY envy like one finds on SSP.

Yea, I like what i see a lot! IMO, an amazing addition to the skyline. Can’t wait to see this tower in greater detail. Excited.

Overall impact will be quite positive. Combined with the other towers it will redefine Midtown, and the new focal point will be a dramatic departure from the ESB, which will now mark the southernmost supertall rather than the ‘highest point.’

Soon, the Far West Side & the eventual 15 Penn will further diminish the ESB’s overall impact, though it will likely always be kind within a few blocks. It is not a bad thing, and simply shows NYC’s continued economic progress & growth. 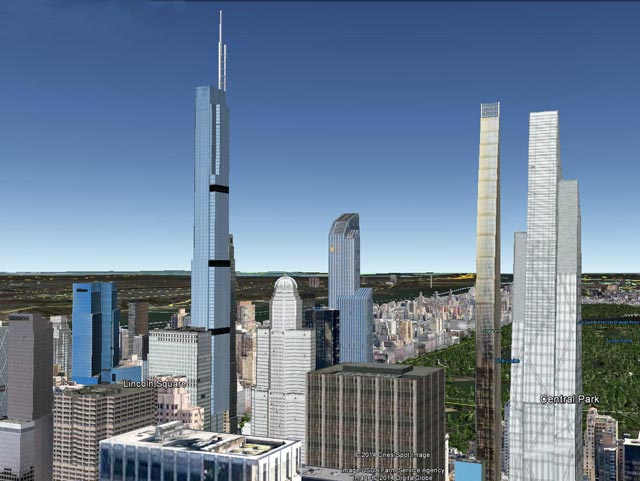 This is going to be amazing! Foundation work appears to be starting. 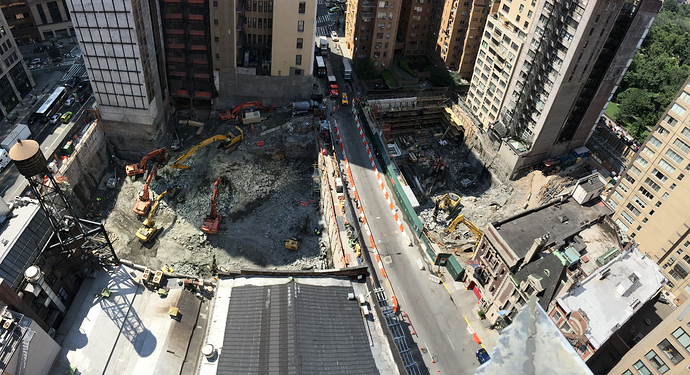 Hopefully, something very tall will rise on the Park Lane and Rizzoli sites too,

Close up of the pour! 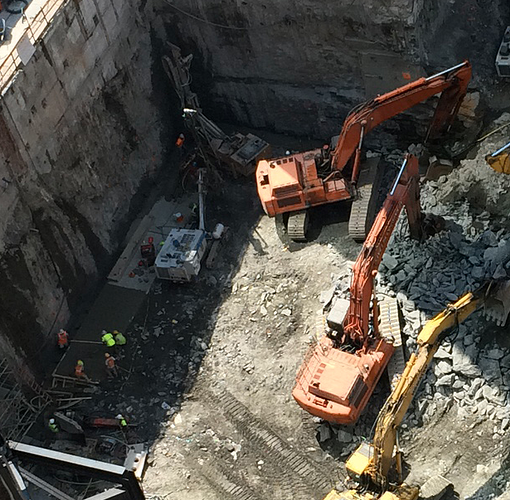 Nice to see foundation starting for both Nordstrom and 220! I would imagine 220 will be further along since the Nordstrom would still have to dig deeper??

For sure-- much more earth to move, as well. Although 220 will probably break street-level first, those cement trucks will be a common sight, regardless. I remember hearing Extell is digging 80+ feet down, and I think they bottomed out where that pour took place, judging by the size of the workers. As witnessed at 432 Park, I’d assume both sites will now start backing out excavation to the north (Nordstrom to 57th, 220 to CPS). I’m just in awe over that bedrock exposed at the Nordstrom site in that recent picture-- amazing to see what Manhattan is like under everything else.

Alright, I joined the forums too!

I’m really glad that Nordstrom is going to have a spire, we need some variety on 57th street. Sure, the roof could be higher (1,550’ ;)), but I won’t complain. The project still sets a new standard regarding height and ambition.

Welcome to the forum, Hunser! Spread the word!!

The Lotos Club at West 57th Street underwent a total transformation in 1950.

This article about the DGA on 110 W 57th is in today’s NYT. As set forth in the final paragraph, this eyesore will be redeveloped at some point. I was surprised to learn, however, that this is an old building whose facade was stripped in 1949 and reclad in its current hideous form. I cannot wait for the current eyesore to be razed.

Welcome to the party, hunser!

Wow that is a shame. Interesting. Hope that thing goes too.

Although my time (and I guess yours as well) is limited, I just need to follow this incredible boom. This is likely a once-in-a-lifetime chance to witness NYC’s greatest (skyline) transformation, even bigger than the one in the 1920s/30s.

The boom is crazy. I mentioned before on your Supertall Thread Hunser, but just for the record for YIMBY:

Emporis updated the New York section. According to the database, there are 143 skyscrapers under construction, and 115 planned. I think in the next year or so, we may be the construction capital of North America.

The city has 696 skyscrapers, and 5,813 high-rises once I reduced the number for the unbuilt and only counted complete. Thats a total of 6509.

When all of the current projects UC finish, that will be 6652.

*** Keep in mind also that this is just for now. Also, the Emporis database doesn’t really update daily. So its missing several high rises (12 floors or greater) by their definition. 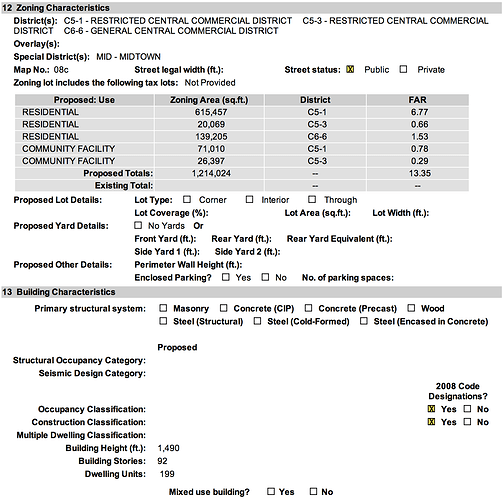 Yes, the crown will exceed 1500’ which is fantastic. This is definitely a milestone as this is roughly a 100’ taller by roof than 432 Park Ave. Gradually, NYC is also making gains when it comes to roof height. Spires are impressive, but roof height commands respect.

Nice! So are they keeping the same design but just stretching it out at the top?