Letting a Mighty Nave Breathe, in Full View of a Neighborhood

A Potential Solution for Developers at St. John the Divine

A construction site for two 15-story apartment towers that would block this view of the Cathedral Church of St. John the Divine. Credit Richard Perry/The New York Times

Workers are digging the foundation for a twin-towered apartment building that will obscure the great flying buttresses and stained-glass windows of the Cathedral Church of St. John the Divine in Morningside Heights.

Preservationists, neighbors and architects are justly up in arms. “The worst affront to a landmark in New York since the loss of Pennsylvania Station,” is how Stephen F. Byrns, a former member of the city’s Landmarks Preservation Commission, put it. Even the developer laments how the approval process for new buildings in New York spews out too many projects that nobody really likes.

The good news is that the situation might still be remedied.

Like other religious institutions today, the cathedral struggles with yawning deficits while trying to protect programs to serve the poor and the city. With an 11-plus-acre campus to play with, its trustees several years ago contracted with a developer to erect a 20-story apartment building on the property’s southeast corner at 110th Street, tucked well away from the church. Completed in 2008, it yields the church some $2 million a year in fees from the developer under a 99-year lease.

An eastward view of the Cathedral Church of St. John the Divine in Morningside Heights, with a construction for apartments on the left. Credit Richard Perry/The New York Times

That’s apparently not enough, so now the trustees have engaged a second developer, the Brodsky Organization, to construct a second project on the north side, along 113th Street, running parallel to and abutting the cathedral. The company, led by Daniel Brodsky, chairman of the Metropolitan Museum of Art, will also pay around $2 million a year under a similar lease.

St. John the Divine is one of the city’s great marvels, with its immense neo-Gothic nave by Ralph Adams Cram. With the new project, designed by Handel Architects, 428 rental apartments split into two 15-story towers will obscure almost the entire northern facade of the church, from Amsterdam Avenue to Morningside Drive. Only apartment dwellers will get a good look at Cram’s facade, staring straight at it from their windows like patrons in the front row of an Imax theater.

The city should have designated the cathedral and its campus a landmark long ago, preventing all this. Perhaps it didn’t because landmark status might have crippled the church financially. But the city dealt with the issue of compensation for historic buildings in Times Square, where landmark theaters were permitted to transfer their unused development rights, known as air rights, to nonadjacent sites.

There’s a debate to be had about whether treasured church properties like St. John the Divine’s campus should be offered a parallel deal, and what that might cost the city. In the meantime, the backhoes are already out of the garage, Mr. Brodsky has spent a pile of cash, and the debate has become polarized between the cathedral, hardened after years fighting protesters, and some die-hard preservationists, who want nothing on the site.

What can be done? Mr. Byrns has come up with a good idea: a single 35-story tower in the one place where it might be O.K. to obscure the northern facade: its unfinished transept, which has been shuttered for more than a decade since it was gutted by a fire. The developer’s current plan carves out space between the two towers for an entrance to the transept, but that seems beside the point.

The single tower alludes to Cram’s original design, which called for an even taller, 440-foot tower atop the cathedral’s crossing. And the idea brings to mind the Hearst Tower on Eighth Avenue near 57th Street. Joseph Urban designed the six-story cast-stone base for that skyscraper during the 1920s; construction of the tower was halted by the Depression. Then the Landmarks Preservation Commission allowed Norman Foster to “complete” the design by adding a glass and steel tower 80 years later. It’s a widely admired building.

A tower for the cathedral would free up most of the north lot, preserving the view of Cram’s great nave. Height is traded for benefits at street level. One downside is that this would require an environmental and public review, which could take years and cost millions.

No doubt that’s why the cathedral didn’t pursue the single-tower idea in the first place, along with the inevitability of ferocious opposition to any tall building. But, if approved, it would make St. John the Divine and Mr. Brodsky a lot more money than the current project, and it could produce a very special work of architecture complementing the majesty of the church, instead of what we’re getting. Even if the review process scuttled the tower plan, the cathedral could still build Handel’s apartments.

Why the trustees settled on a plot next to the church when they have so much other land to build on begs logic. “It would be a tragedy not to take the extra time now to get the right design for the future,” the architect Robert A. M. Stern told me the other day. “Given that something must be built, a sympathetically designed tower seem the right way to go forward.”

It’s also a Hail Mary pass. The city long since dropped the ball. Die-hards will balk. Mr. Brodsky would need to be made whole.

But it just might yet save the cathedral, for posterity, and from itself. 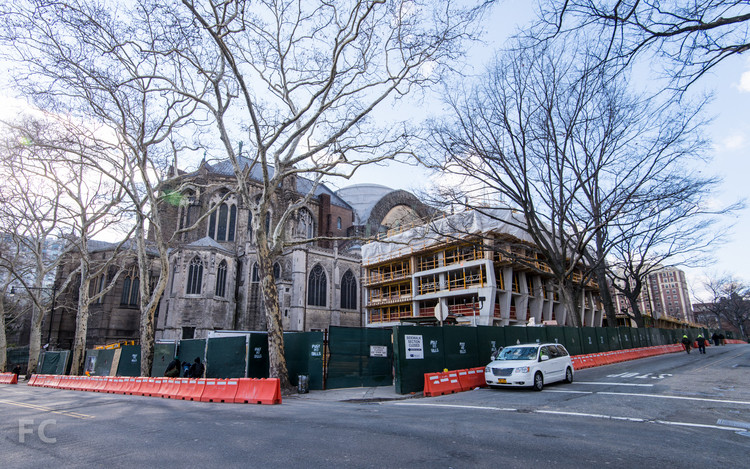 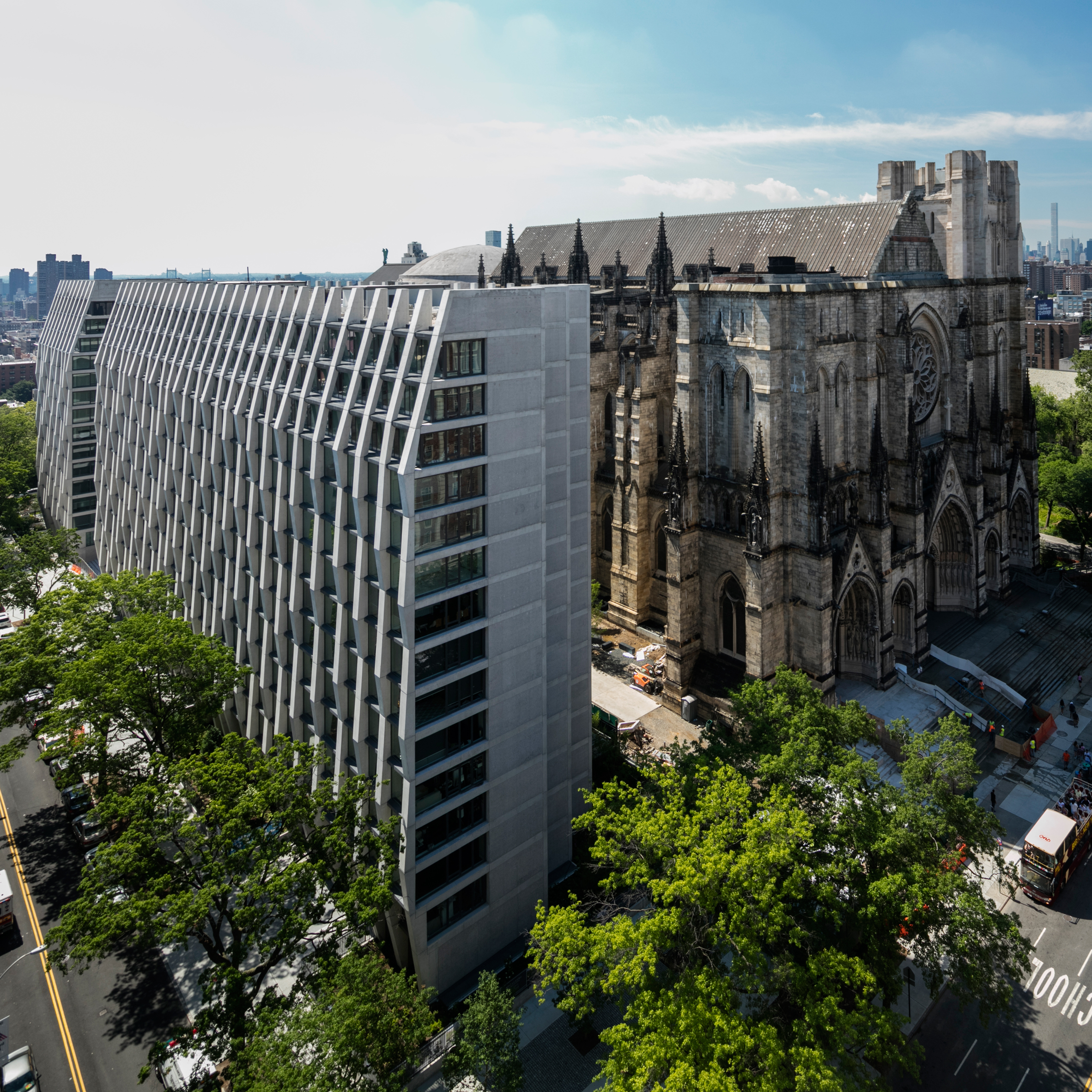 US studio Handel Architects has completed a pair of residential towers with concrete facade elements designed to reference a neighbouring stone cathedral. 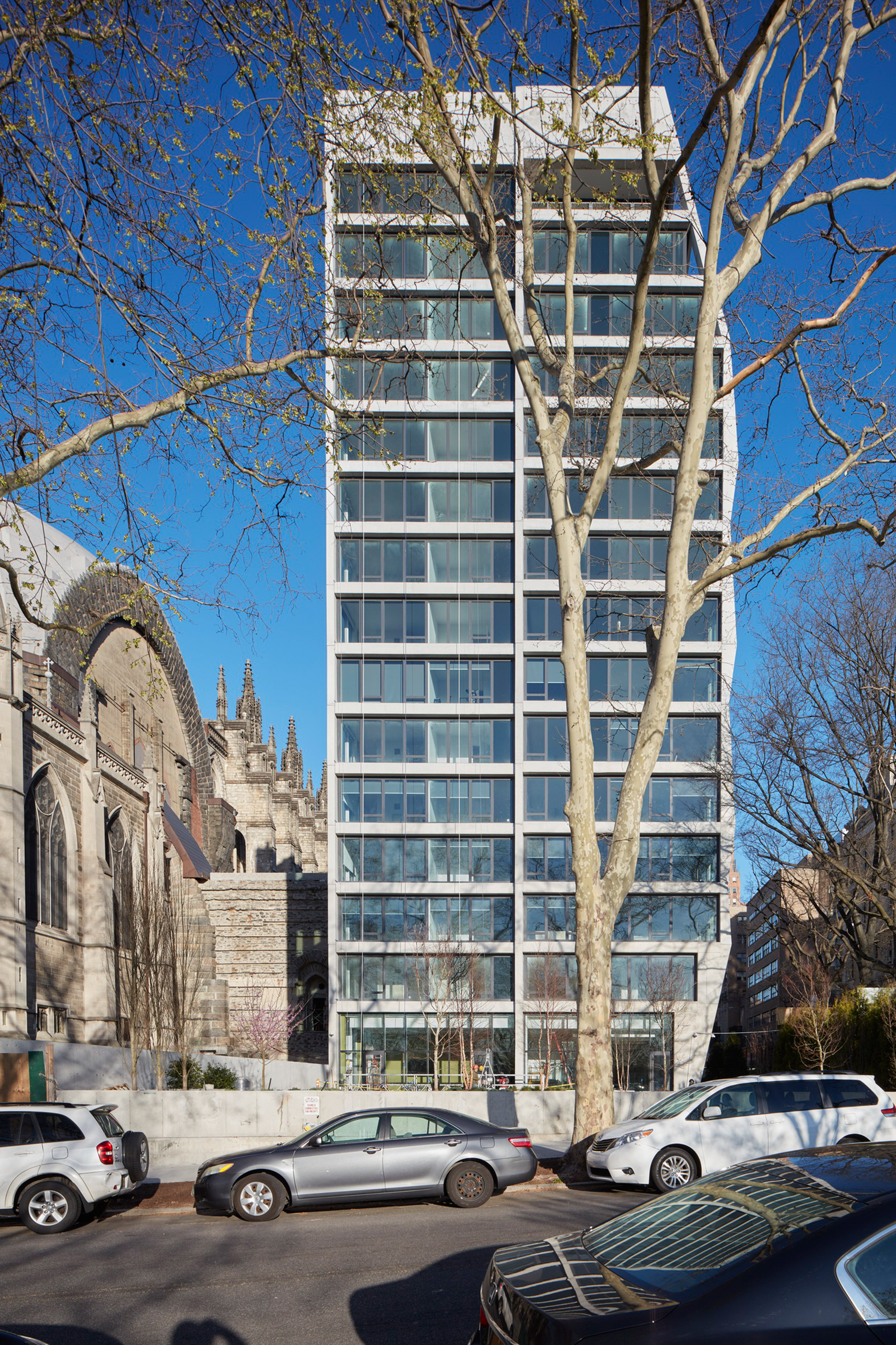 This came out great.