Pier 40 to Be Saved Under Plan to Build 1,500 Apartments in West Village 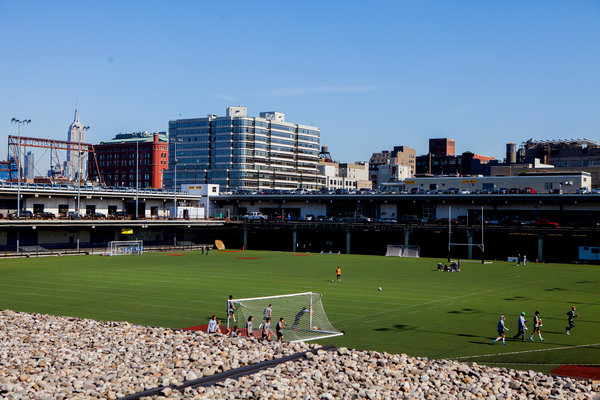 After years of debate, disagreement and inaction, New York City officials and developers plan to announce on Wednesday a proposal to save Pier 40, the former cargo terminal in Manhattan that is in danger of collapsing into the Hudson River, by selling off air rights to a developer that plans to build on the other side of the West Side Highway.

The plan, which still needs to go through a public approval process, envisions raising more than $100 million by selling the air rights to allow the development of five buildings between Clarkson and Charlton Streets, on the eastern flank of the highway, that would include hundreds of apartments for low- and middle-income households.

The money raised would be used to repair the 15-acre pier, which is currently known to most New Yorkers for its public parking lot and crowded but aging athletic fields. A recent study found that the pier was falling apart, with more than half of the 3,500 steel pilings that support the structure suffering from severe deterioration.

“This is a huge win for the park,” said Madelyn Wils, the president of the Hudson River Park Trust, a partnership between New York State and the city that is charged with the design, construction and operation of the four-mile-long park along the river.

The creation of the park has been one of the most ambitious investments in public space in Manhattan since the construction of Central Park and has helped transform the Hudson waterfront.

Developers have taken advantage of the improvement by building gleaming towers on the other side of the highway, most catering only to those who could afford to pay millions of dollars for an apartment.

Ms. Wils said that for the first time, this plan would call for a developer to contribute to the well-being of the park itself.

Carl Weisbrod, the chairman of the New York City Planning Commission, said that affordable housing was desperately needed in the West Village area and that the proposal would also protect the pier as a community space.

The project, being developed by Westbrook Partners and Atlas Capital Group L.L.C., will include five buildings ranging from 240 feet to 430 feet tall, rising on the site of the St. John’s Warehouse.

It will create 1.7 million square feet of floor space, of which 1.3 million will be devoted to housing, with 1,586 residential units created. Thirty percent of those units would be a mix of low-income, moderate-income and senior housing.

Is this the Saint John’s terminal? Nice! this would be great news.

Yes. I hate that thing. Prior proposals which showed additions on top of that filthy eyesore were horrible.