With condos being planned, this could be 400 to 450 ft or more based on your typical condo building rising with the allotted sq footage. Its not a big site either. Definitely will be tall for the neighborhood. Your new Manhattan condos have very high ceilings, and suspect given the area, it will be ultra-luxury. Similar to Sutton in terms of luxury, only on a much smaller scale. I don’t buy the respect the church additude. The developer I doubt would give up an opportunity. Most likely opting for the 40 floor option. Even at 30, with modern ceiling heights, where looking at 350-400 ft at minimum.

No one can serve two masters, scripture says. But leaders at the Union Theological Seminary hope that, in their case, God and money can co-exist.

The Seminary in Morningside Heights, hoping to fund a $100 million renovation, is considering a condominium development on campus and the sale of 350,000 square feet of development rights, to the consternation of its social-justice-oriented students.

The religious school at 3041 Broadway, considered the birthplace of black liberation theology and feminist theology, has contemplated development on campus for decades, with plans centered around a “slender building” situation in the northern part of the quadrangle, Rev. Dr. Serene Jones, the school’s present, told the Wall Street Journal.

She wouldn’t divulge exactly how tall a potential building would be, but said it would “respect” the nearby Riverside Church, which stands 293 feet. It would likely stand around 35 to 40 stories, according to Robert Von Ancken of Newmark Grubb Knight Frank.

In a letter, more than 200 students and alumni called for the plan to be halted.

“Building a new high-rise community only for the elite in the heart of the UTS campus is antithetical to the building of a world where all God’s children are to be loved, housed and cared for,” the letter stated.

In her defense, Jones cited theologian Reinhold Niebuhr. “You never make decisions in a morally pure world,” she told the Journal. “We live in a morally complex environment.”

St. Patrick’s Cathedral in Midtown is also looking to sell its air rights.

Nice. I wouldn’t want anything too tall in that area though. 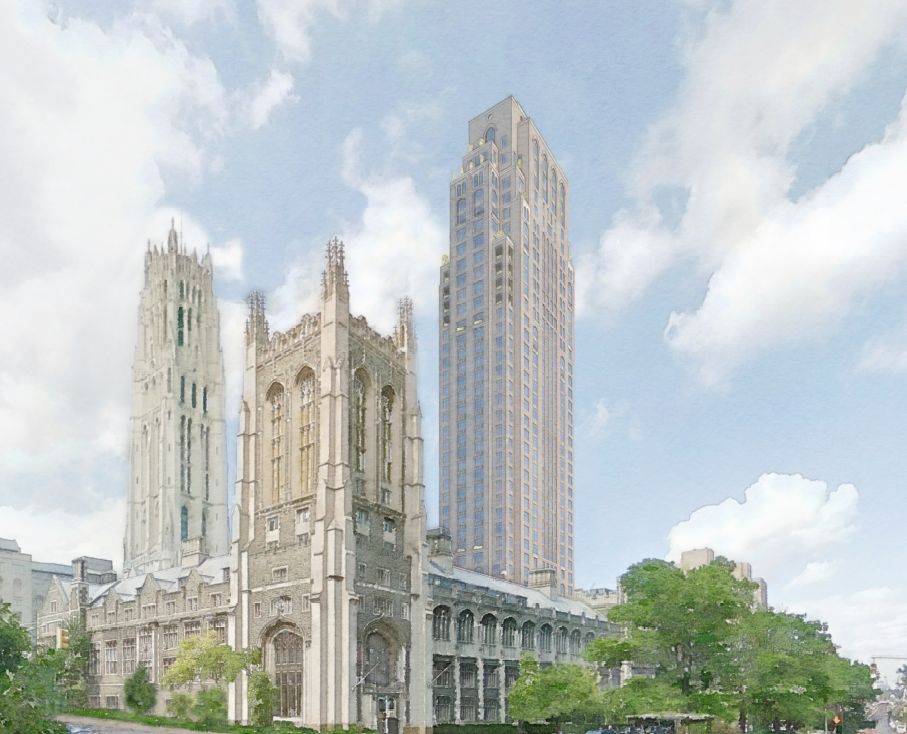 A Morningside Heights religious group is planning to build a 42-story tower in its $125 million campus rehabilitation.

The Union Theological Seminary and developer Lendlease on Friday unveiled details and renderings of the nearly 350,000-square-foot building. The structure, being designed by Robert A.M. Stern Architects, will have a variety of uses and include private condos and space for the institution.

The seminary, a 182-year-old nondenominational religious education and social justice center, takes up a full block along Broadway, between West 120th and West 122nd streets. Its buildings, constructed in 1910, have fallen into disrepair. Several years ago the institution announced it would pursue a major renovation of the property, including repairs of basic infrastructure, such as boilers, and upgrades that would increase accessibility for visitors with disabilities. However, seminary leaders were taken aback at the cost and extent of work needed.

“It was as if we spontaneously hit the expiration date and the facades and infrastructure of the buildings all began falling apart at once,” said Serene Jones, president of the seminary.

To pay for the lion’s share of the project, the organization opted to partner with Lendlease and L+M Development Partners. The development team plans to purchase the seminary’s air rights and then construct the 42-story tower. The condos will be sold by Lendlease and L+M while the office space, faculty housing and classrooms will be owned by the seminary. The terms of the air-rights deal have not been finalized.

The organization plans to devote $5 million of project funds toward a community investment fund that will be directed toward local projects agreed upon by a nonprofit and local elected officials.

The seminary plans to break ground on the larger initiative in the summer and the development team will likely begin work on the tower around the same time.

Beautiful! Who would have ever expected super luxury apartments in Harlem?

Really not Harlem. It’s adjacent to the northern edge of the Columbia campus some blocks west of Morningside Park.

Nice to see another Ramsa tower on the UWS. 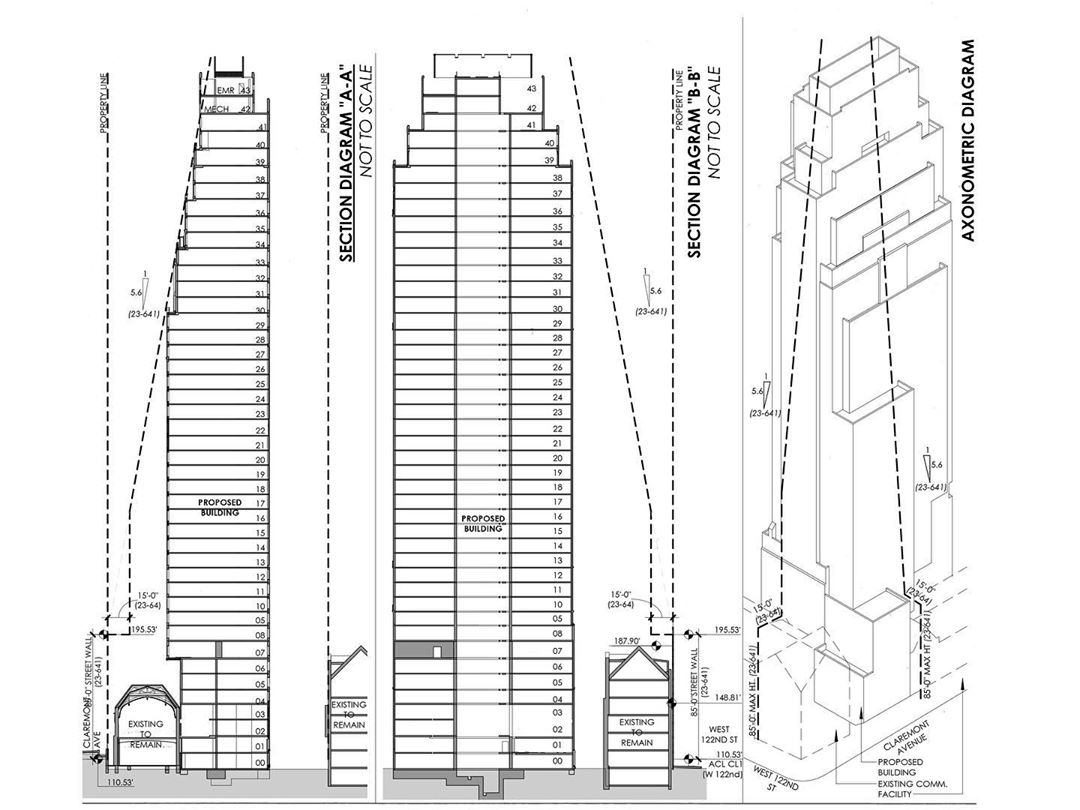 It looks like the middle portion will be demolished for the residential entrance: 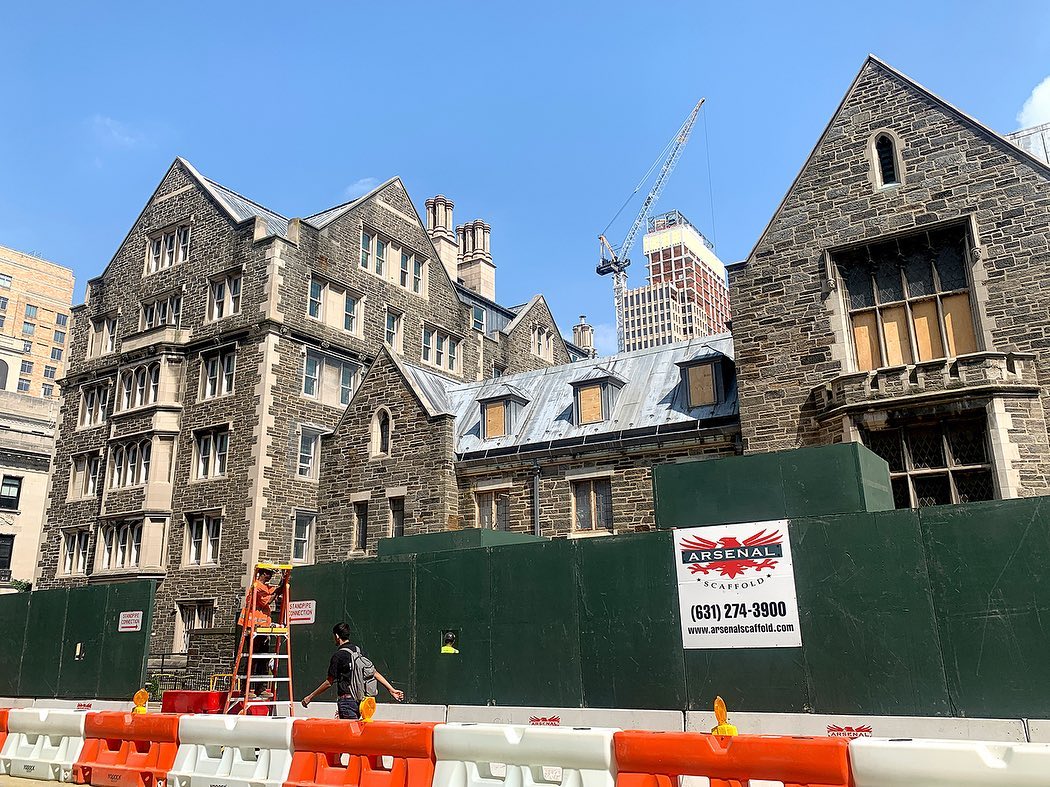 So, they’re saving the exterior façade? If so, that’s great news.

If you look at the plans on the instagram:

They’re keeping most of the original streetwall. The interior court takes the brunt of the footprint. The Hudson side of the building looks a lot more interesting than the Broadway side. Looking forward to that.

Preparations have begun for demolition at 3041 Broadway, aka 100 Claremont Avenue, to clear the way for a 42-story mixed-use condominium designed by Robert A. M. Stern Architects. Located between West 120th and 122nd Streets in Morningside Heights among the historic Union Theological Seminary complex, the project is being developed by L&M Development Partners and Lendlease, with SLCE Architects as the architect of record.

Photos show scaffolding covering the structure to be demolished. An adjacent structure’s windows are also boarded up and an exterior hoist is affixed to its curtain wall.

The new building will use 350,000 square feet of air rights and will most likely be on par or slightly taller than the neighboring Riverside Church spire, which has long stood supreme in height over the neighborhood. Residents of 3041 Broadway will be afforded views of the George Washington Bridge, the Hudson River, and Midtown to the south. The structure will contain a mix of private condominiums and institutional space that includes new offices, faculty housing, and classrooms.

A diagram seen on the YIMBY forums shows that a majority of the massing will rise from the block’s inner courtyard, and the main entrance will be located along Claremont Avenue.

The first official rendering surfaced in the YIMBY Forums of the 42-story mixed-use condominium building at 3041 Broadway in Morningside Heights.

Demolition Wraps for RAMSA's 42-Story Tower at 3041 Broadway in Morningside...

Demolition appears complete at 3041 Broadway for a 42-story tower designed by Robert A.M. Stern and developed by L&M Development Partners and Lendlease.

L+M Development Partners and Lendlease secured a $250 million construction loan for a mixed-use tower at Columbia University in Morningside Heights.

This project is marshaling resources.

This is now under construction

The excavation/foundation phase of the project, which commenced July 6, continues and is expected to take approximately seven months. Rock excavation/chopping will continue for approximately three months and includes excavators with hoe rams to chop and loosen the rock, line drillers to more easily remove the rock, and excavators with buckets to remove and load soil and loose rock into trucks. Rock chopping and drillers will be noisy.

Trucks will frequently be removing material from the site throughout the excavation phase of work. During this time, concrete will be poured from trucks to construct temporary support walls for the excavation and permanent anchors will be drilled into the rock with drill rigs. Concrete foundation work will include installing rock anchors, steel reinforcing deliveries and installation, along with concrete delivery from trucks and placement by concrete pumps and buckets carried by an excavator. Noise and dust mitigation plans will be followed.

Please note activities are subject to change due to weather and other conditions.

Nice overview from earlier in the year: