> All Aboard Florida has revealed plans for a 3-million square foot mixed-use station downtown, including an 80-story tower.

The transportation hub will include mixed-use development with residential, office, commercial, and a retail concourse, while serving as a connector between All Aboard Florida’s passengers and Miami’s existing public transport systems.

The Overtown site will also be a mixed-use development with retail, commercial and parking to support and enhance the transportation hub.

Three towers ranging in height from 15 to 28 stories will sit atop the station, along with the 80-story tower south of the station. The station itself will be elevated 50-feet, allowing for streets to pass through underneath.

Construction on the rail line is expected to begin within the next few months.
John Guitar, Senior Vice President, Business Development with All Aboard Florida, will be discussing plans at the Commercial Industrial Association of South Florida‘s (CIASF) next monthly meeting, scheduled for Friday, June 13.

Guitar is responsible for the development and leasing activities for the stations and transit oriented development in Miami, Fort Lauderdale and West Palm Beach.

Like many of the mega developments in Miami, this will be built in phases.

All Aboard Florida had a press conference this morning at the future site of their Downtown Miami train station revealing the design by Skidmore, Owings & Merrill and Zyscovich Architects. Read on for highlights from the show:

All Aboard Florida Closes Parking Lots To Prepare For Construction

Four parking lots in the heart of downtown Miami were closed last week by All Aboard Florida to prepare for construction of a $150 million rail terminal.

The lots had been managed by the Miami Parking Authority on behalf of All Aboard Florida and its parent company. Miami Parking Authority Chief Executive Officer Art Noriega confirmed that lots A, B, C and D were closed at the end of last week at the request of All Aboard Florida. They had initially been planned to close on July 1, but AAF requested that the closure be delayed.

Noriega said that other garages and lots in the area will be able to accommodate the demand for parking in the area, although some motorists will have to walk an extra block or two.

Financing for construction of the rail terminal is in place. Prep work is expected to begin immediately, with an official groundbreaking ceremony in September.

Below is a brochure for All Aboard Florida’s downtown Miami station, which has been renamed MiamiCentral. (See: PDF LINK)

Also included are never before seen renderings and plans for 700 MiamiCentral, a retail, office and parking complex that is being built on Overtown CRA land known as Block 56 (a parcel known as Block 45 is being developed separately by Don Peebles and Barron Channer.)

In total, 178,000 square feet of retail is being offered at the station. A 32,817 Food Hall anchors the retail space – smaller in size than prototypical Publix and Whole Foods stores.

At 700 MiamiCentral, the focus appears to be mostly on providing parking for the station, with 1,180 spaces being built there. Also being built on the Overtown land – 36,500 square feet of retail space, and 109,000 square feet of office space. Delivery is promised for December 2016. 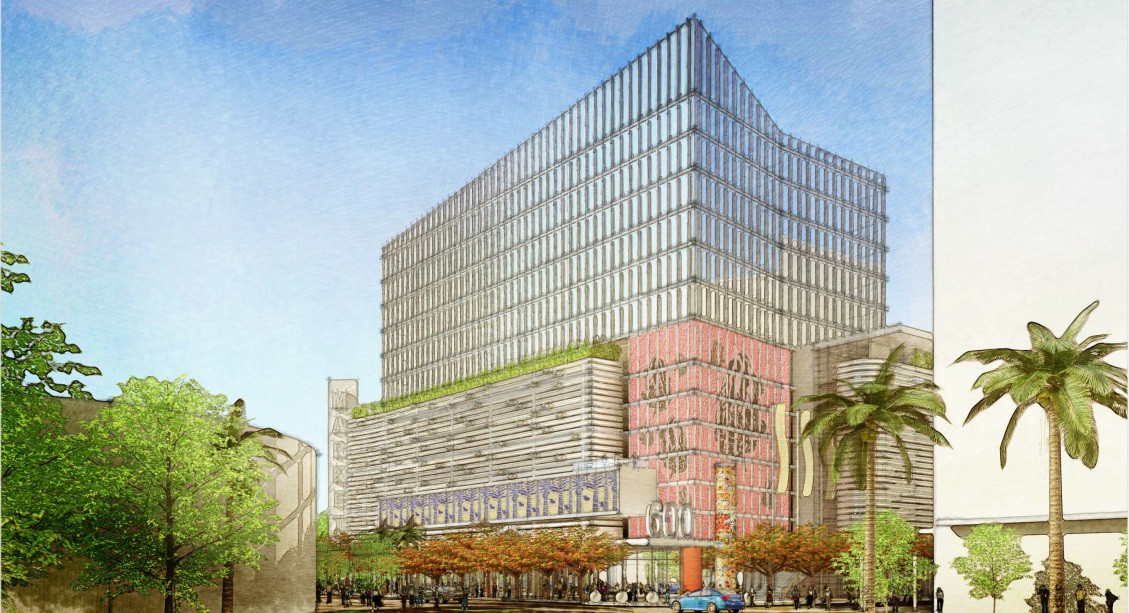 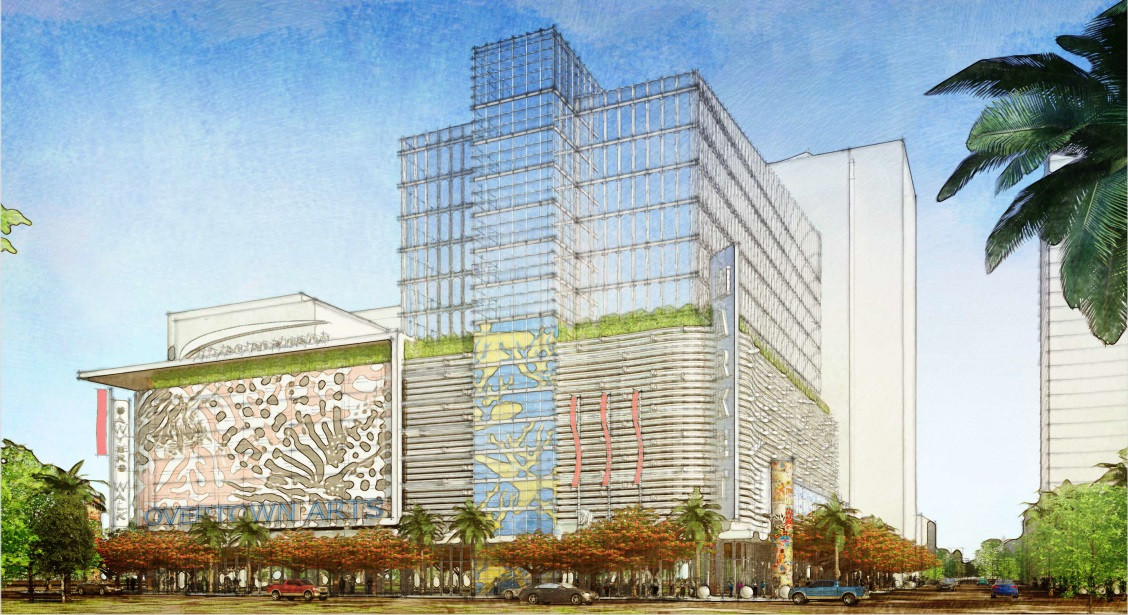 MiamiCentral Will Have a 1 Million Square Foot 'Supertower’

Buried in leasing plans revealed yesterday on exMiami is this little kernel of big fat news: MiamiCentral is planning a one million square foot ‘superpower’ on the block directly south of the station, in addition to the other towers of the project. It will be a combination of offices, hotel, and residences. Yes, we knew they were doing a big tower, but ay dios mio. No word yet on how many floors this thing will be, although it’s a safe bet that the Federal Aviation Administration is going to have some finger wagging to do. In other All Aboard Florida news, there are two new renderings that little annex they’re building in Overtown.

MiamiCentral Supertower Could Become One Of The Tallest In The U.S.

All Aboard Florida has been calling one of the planned towers at MiamiCentral a ‘supertower,’ and it could could become one of the tallest buildings in the country.

According to a recent filing with the FAA, All Aboard Florida wants to build the tower as high as 1,120 feet above ground (or 1,131 above sea level). That would make it taller than any building that exists or is under construction in the U.S., outside of New York and Chicago.

It also won’t be the only tall tower at MiamiCentral. At least one other high rise at the site is proposed to rise to 840 feet above ground.

Site work is already underway at MiamiCentral and the first phase will begin full construction soon.

The tower at MiamiCentral is one of several that are vying to break the 1,000-foot mark in Miami. The FAA has been reviewing a tower at Brickell City Centre that is proposed to rise 1,040 feet above ground for over a year (Swire has already reduced the height from initial plans that exceeded 1,100 feet). Tibor Hollo’s 1,005-foot One Bayfront Plaza has also been under review for nearly a year. Hollo’s Panorama Tower is under construction and approved at 822 feet, taller than anything currently in Miami. Also, Jeff Berkowitz has started site work for the 990-foot SkyRise Miami tower. 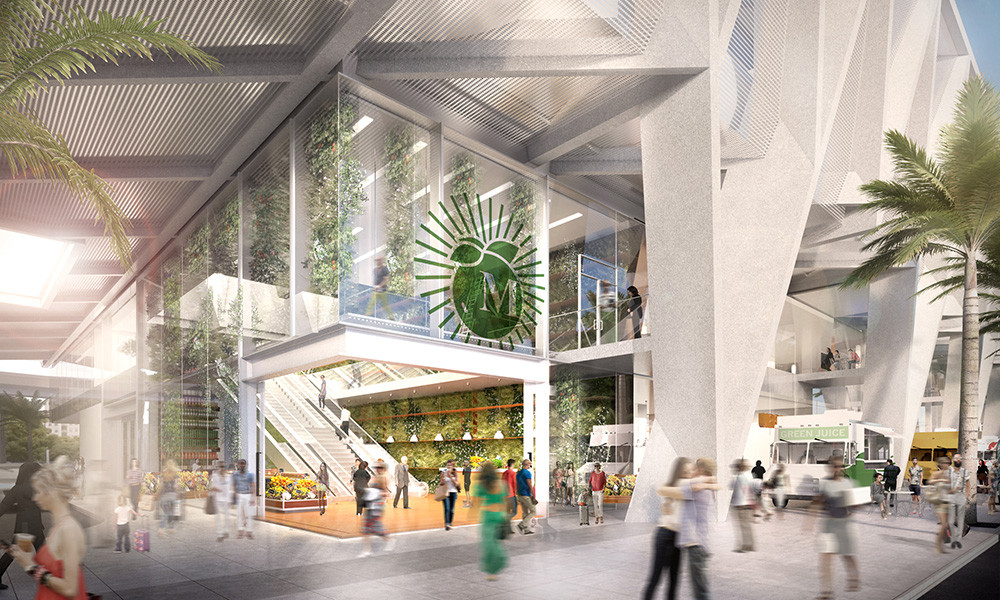 Thirty-two trains a day – 16 departures from Miami, 16 arrivals to Miami.
That is the ambitious expectation for All Aboard Florida, a private venture to bring passenger rail service back to South Florida.

Representatives of All Aboard Florida attended a real estate forum in Coral Gables last week and shared some particulars to the main train station under construction in downtown Miami, the southern end of a new intercity passenger rail link to Orlando.

The trains will come on line in January 2017, according to Charles Shallat, executive vice president with Lincoln Property Co., working with All Aboard Florida.

The multi-block complex being built adjacent to the county government center – MiamiCentral – will be much more than a transportation hub, although that will be the foundation.

“It’s a hub we’re creating,” said Mr. Shallat. The MiamiCentral station will be the culmination of all modes of transportation: The long-distance train, Metrorail, Metromover, buses, trolleys, bike rentals, taxis and more.

Those who choose to live at central station can do so without owning a car, he said.

But the project does include four levels of parking for those unable or unwilling to give up their private vehicles. Panelists agreed the transition away from the auto will be slow.

Phase one of central station is to include the base facility with elevated tracks. The entire downtown site for All Aboard Florida is eight blocks long.

Two residential towers with 800 dwelling units are planned for the project’s central portion, he said.

See The Newly Revised Plans For MiamiCentral, Now Being Reviewed

Plans for MiamiCentral have been revised and resubmitted to Dade County officials for review (the modified plans are below).

The tweaked plans includes the use of precast concrete rather than cast-in-place concrete for some elements of the station. According to Miami Today, a committee comprised of county staffers and city of Miami representatives have not yet approved the plan.

The plans also show a potential bus terminal on land next to County Hall, and integration of the train terminal with a Metrorail station.

Also noted are limits that could affect future phases of the project, including a limit of 500 units per acre and an FAA height limit of 900 feet above mean sea level.

Skidmore, Owings & Merrill and Miami’s Zyscovich are the project architects.

[All Aboard Florida Readies MiamiCentral For Final Review Next Week][1]

Dade’s Rapid Transit Developmental Impact Committee will review plans for All Aboard Florida’s MiamiCentral project at a meeting next Thursday (January 22).

This is the final step in the approval process. If the committee votes in favor, All Aboard Florida could begin the permitting process immediately.

According to county administrators, there are several unresolved issues that AAF is rushing to address prior to the meeting, including the location of several project components, a miscalculation of landscaping requirements, and an acceptable maintenance plan. If AAF is unable to complete those plans by the meeting, it will likely need to be deferred.

County officials are also privately expressing doubt about AAF’s aggressive goal of opening the project in the Fall of 2016, considering how technically challenging the project is.

The meeting is open to the public, although it is considered an administrative review. 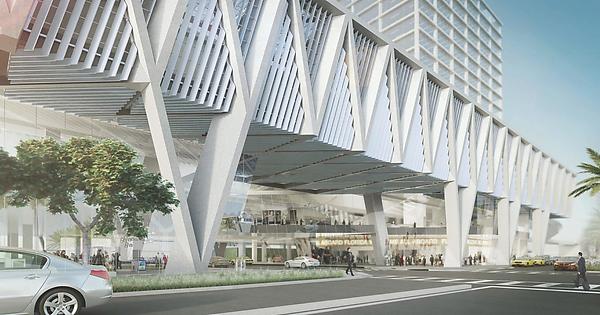 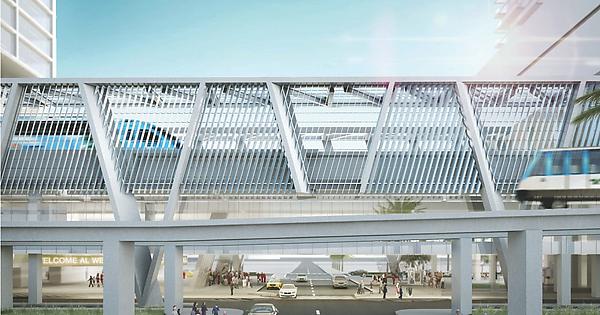 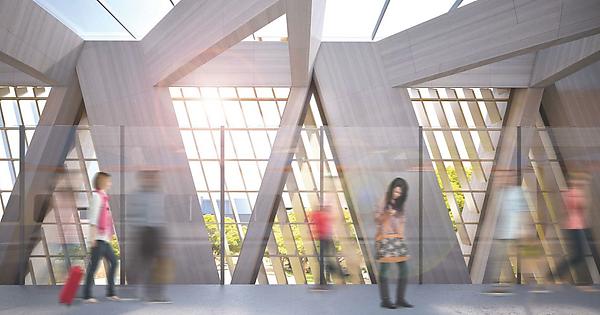 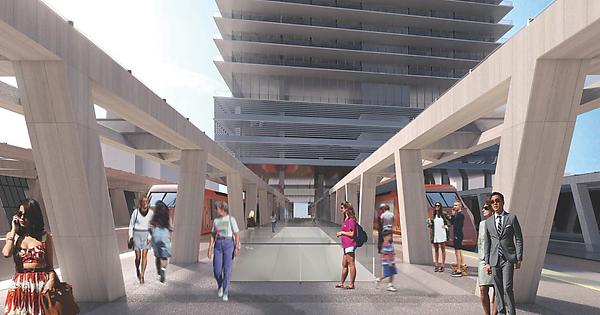 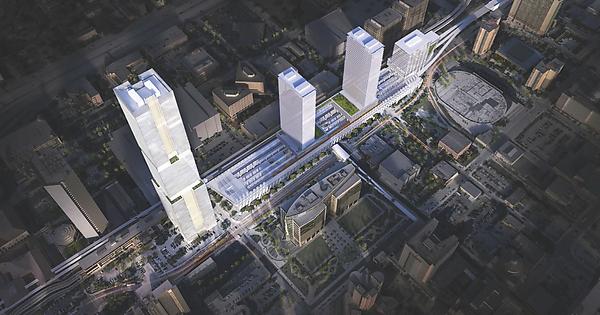 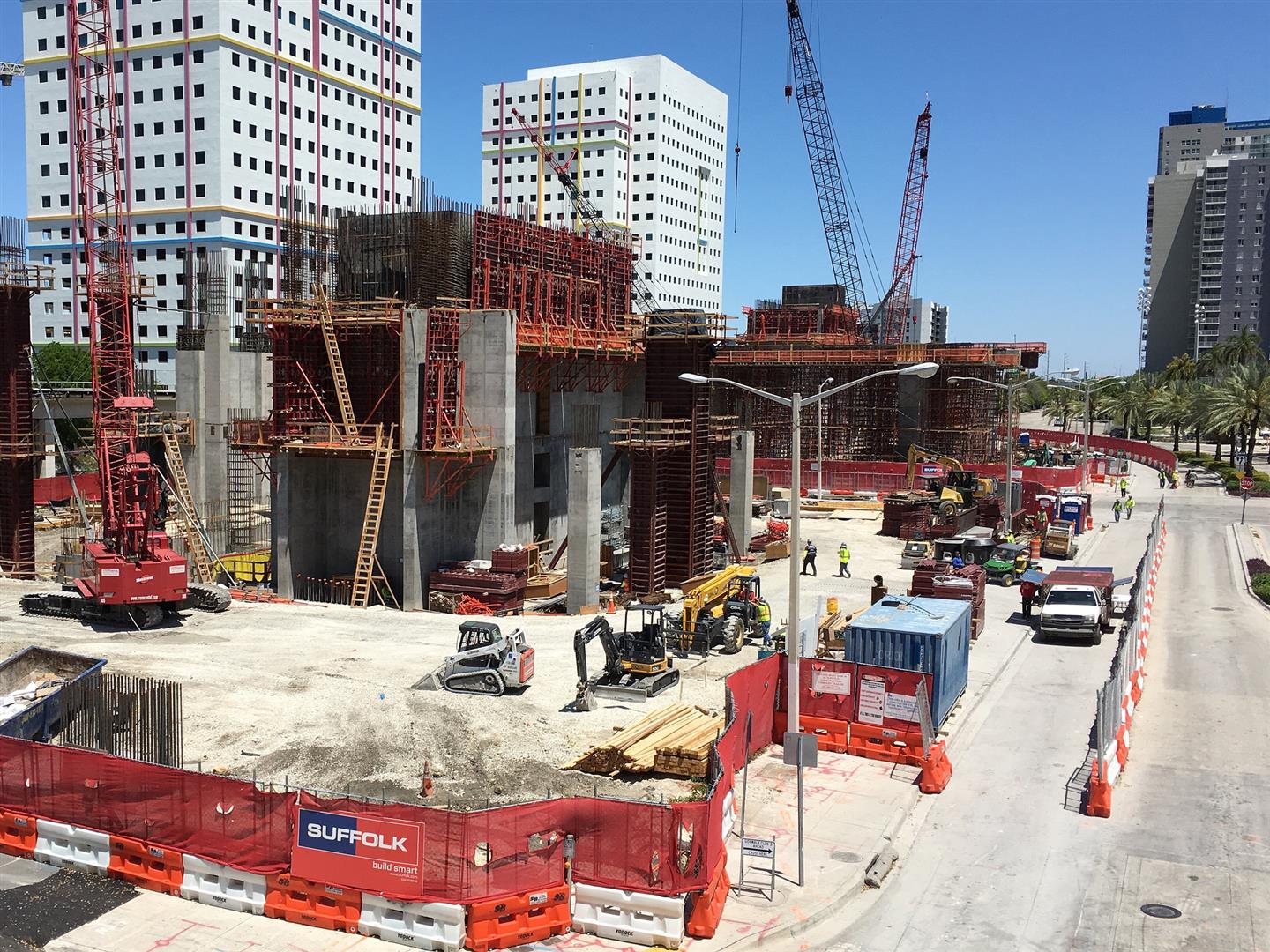 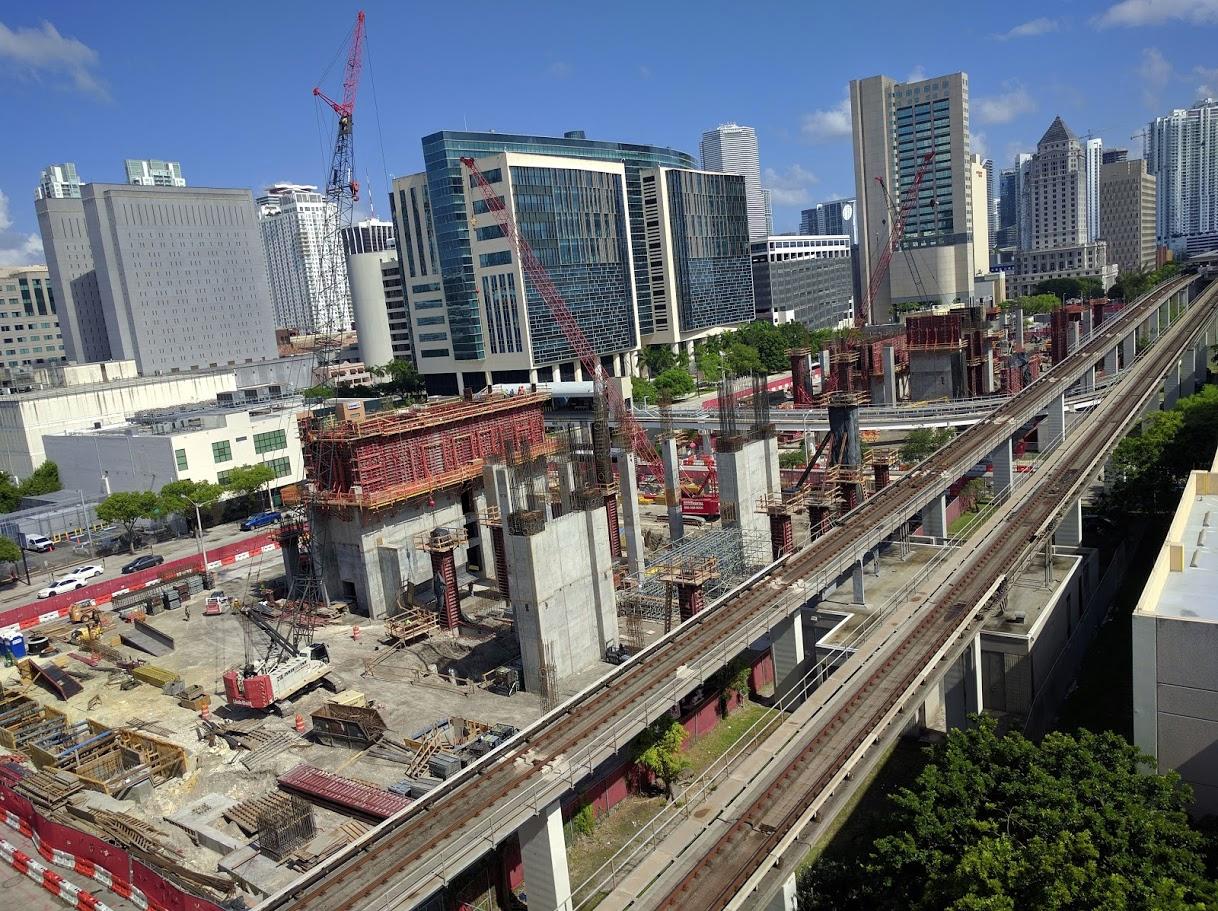 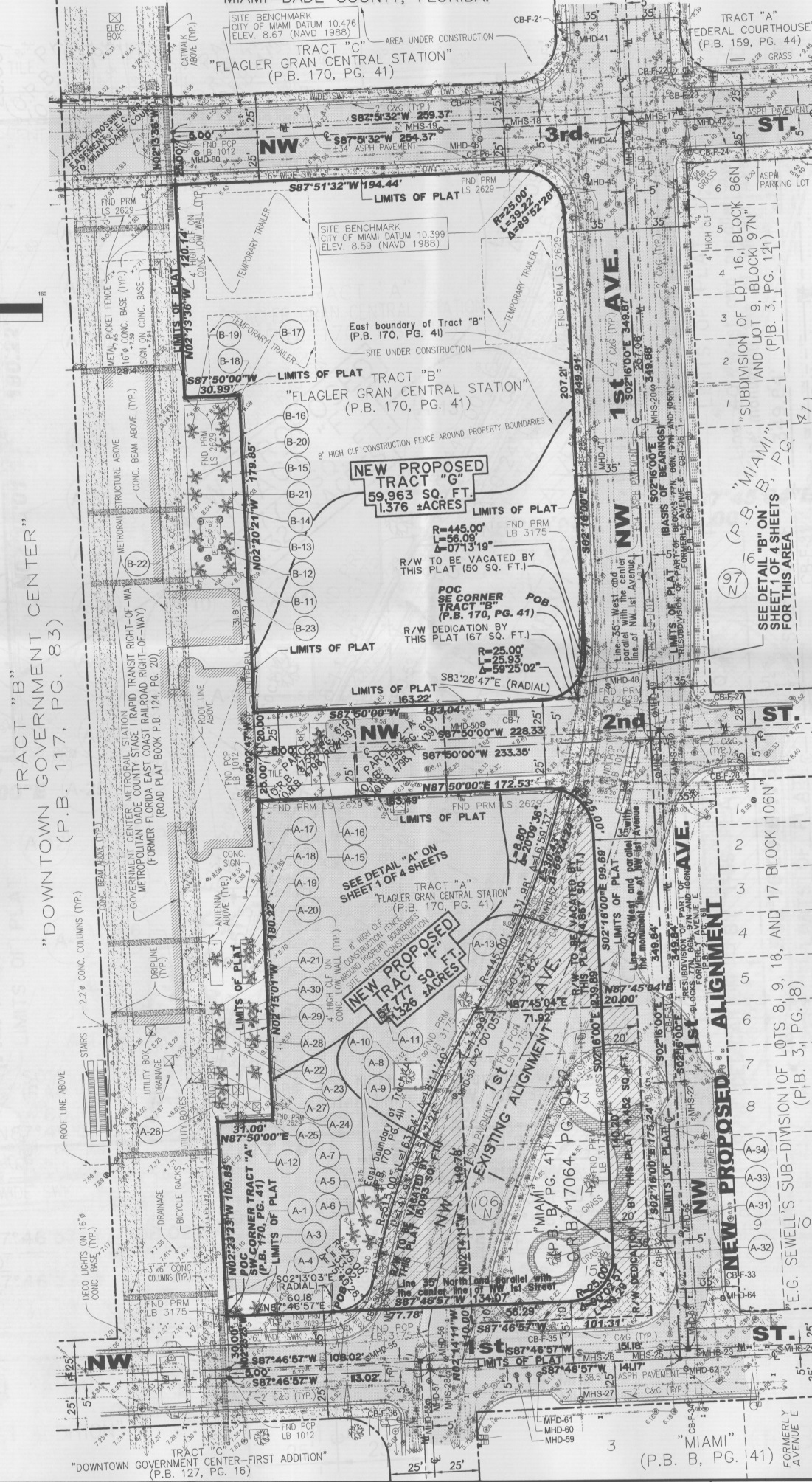 All Aboard Florida is making big plans for the second phase of MiamiCentral.

Land previously reserved for single “supertower” has now been split into two separate tracts, according to documents filed with the county last month. The plans indicate that each tract will have a separate tower.

The proposed hotel would be bigger than any existing hotel within the city of Miami, while the office tower would be one of the biggest ever built in the city.

Interest in the first phase of the project has been strong, with most of the office and retail space already leased.
Credit: NXT 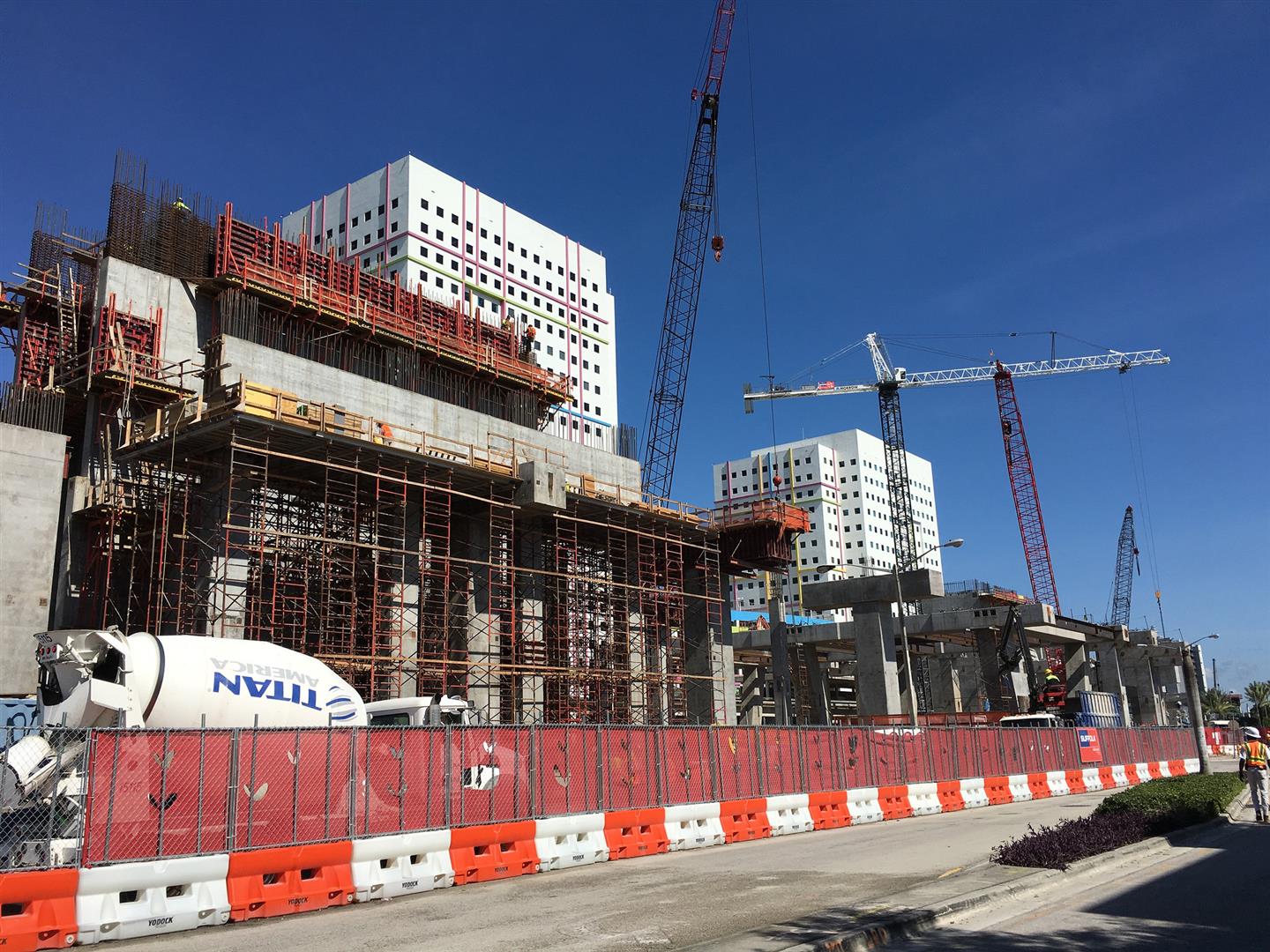 All of Miami seems under construction. 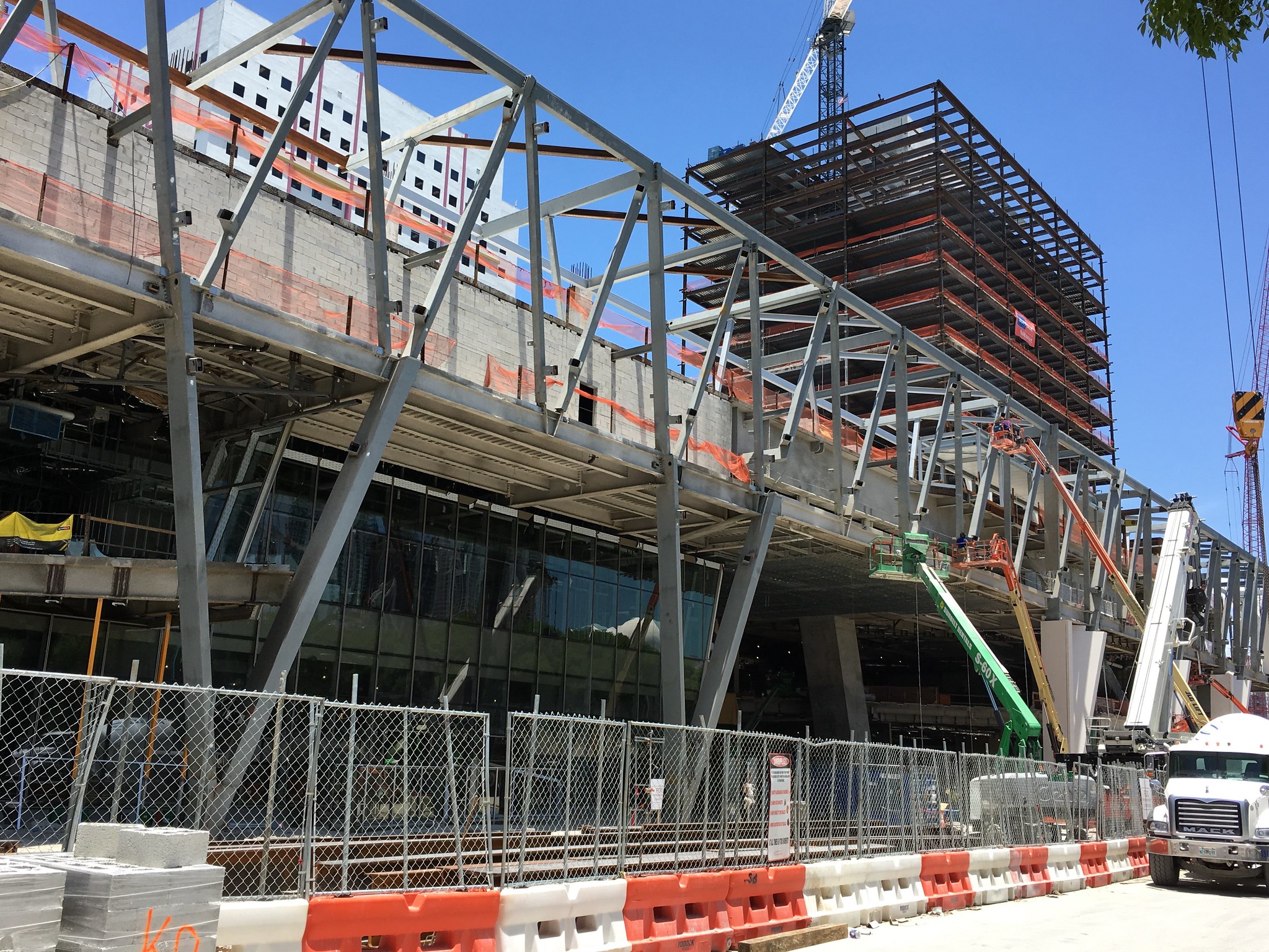 All Aboard Florida Miami Central Construction by Phillip Pessar, on Flickr

So is the supertall under construction as well? Or is it a phase two kind of deal…

Its not happening the super tall. Phase 2 will happen but it was downsized.