Plans for a six-story multi-family residential building at 1235 West Avenue in Miami Beach were recently submitted to Miami Beach officials for review.

Jaime Shapiro of Shapiro Associates in Bay Harbor Islands is the architect. Joel S. Bary is the primary owner of the controlling entity.

Note: This was originally suppose to host Miami Beach’s new tallest, but due to zoning, it was struck down. With that said, this is the project that will rise instead.

Galbut, the managing principal of Crescent Heights, told TRD on Wednesday that he is moving forward “immediately” on an already-entitled project in the 600 block of Alton Road, with 445 rental apartments and 60,000 square feet of commercial space. As for the 500 block, where he proposed co-developing the tallest tower in South Beach with Related Group, Galbut said he is now considering a “more subdued park” and “smaller tower.”

Pre-leasing is underway at ParkSquare, a mixed-use project proposed for a vacant lot on Waterways Boulevard in Aventura.

The 7.37-acre parcel was sold to Integra Investments last year for $21 million.

The proposed project is to include:

The project replaces a plan by the previous owners for the site designed by Arquitectonica called City Place, which was approved by the city of Aventura. The modified plan was set to be voted on by the city commission at a January 7th hearing.

Note: After the expansion, this will be the nation’s 2nd largest mall. Currently without the expansion, its the 16h largest or 3rd depending on the measuring system.

One of the nation’s biggest and most prosperous shopping malls is about to get even bigger. The Aventura Mall will soon demolish its existing food court to build a new three-story wing of stores and a parking garage of up to seven levels tall.

Turnberry Associates, which owns and manages the mall, got the go-ahead from the Aventura City Commission earlier this month. The company hopes to begin construction by the end of the year. Plans for relocating the food court are not yet finalized, said a mall spokesman.

The 241,000-square-foot expansion will be constructed on the current food court site, near the JCPenney store. The parking garage could include as many as 1,400 spaces.

The Aventura Mall already is Florida’s largest mall and one of the nation’s biggest, with 2.7 million square feet of floor space. That makes it the nation’s 16th largest, according to Mall Directory of America; by other measures, it comes in as the third largest. It also is one of the top five highest grossing malls in the country in terms of sales per square foot, according to Turnberry.

A Coral Gables billionaire wants to hoist a 500-pound American flag atop a massive, 40-story flagpole over downtown Miami.

Mike Fernandez, chairman of the Gables-based MBF Healthcare Partners, toured several Miami sites Wednesday afternoon with a city commissioner and Miami’s city manager in order to discuss possible locations for the tallest flagpole in the country. They planned to visit the point where Bayfront Park meets the InterContinental Miami, the north corner of the FEC slip near the AmericanAirlines Arena, and Virginia Key, with Fernandez’s preferred site somewhere between the arena and the Pérez Art Museum Miami.

“It’s a gift that I’d like to consider giving to our country and to our city,” Fernandez told The Herald.

Fernandez, a major donor to Republican candidates and the former chief fundraiser for Gov. Rick Scott, has been mulling a way to pay homage to the United States for years. He came to the U.S. from Cuba in 1964 as a penniless child and made his fortune in healthcare. He says the idea is “very preliminary,” but he began to consider flying a massive flag over downtown after watching a video of the Wisconsin-based insurer Acuity building a 400-foot tall flagpole on its Sheboygan campus.

Project: The Edge at Brickell

Note: Not to be confused with the other “The Edge at Brickell” which is a skyscraper also being developed in Miami. Many projects in Miami tend to have the same name for some reason.

A 418 unit apartment complex is quietly rising in Brickell.

SoMa at Brickell, formerly known as The Edge at Brickell, broke ground earlier this year. It is being developed by Alliance Residential, with equity funding provided by Behringer Harvard and Monogram Residential.

Apartments will range in size from studios to two bedrooms, with an average size of 799 square feet.

Credit: With permission from Goldenduskphotography.com

Located in the heart of South of Fifth, developer Russell Galbut is building an incredible family residence.

The 17,000 square foot residence will be above Menin Hospitality’s Radio Bar and Red Ginger Restaurant. It will have a rooftop terrace, infinity pool and racquetball court, but the most amazing feature will be the robotic parking garage.

Construction is expected to be completed by the end of 2015.

Construction continues on two hotels in Miami Beach being developed by Robert Finvarb Companies. The hotels will be managed by Marriott and Hyatt.

AC Hotel By Marriott broke ground last year at 2912 Collins Avenue, across from the 294-room Abu Dhabi-owned Seville/Edition Hotel by Marriot (also under construction). The ‘European design’ AC Hotel will include 150 rooms and 4,000 square feet of retail.

A second Finvarb hotel, the Hyatt South Beach, is under construction at 1600 Collins Avenue across from the Loews Hotel. It will include 105 rooms, 9,000 square feet of retail space, and a 64-space robotic parking garage.

S2 is also a partner in the Muse Sunny Isles project.

The architect is Miami’s Charles Benson. 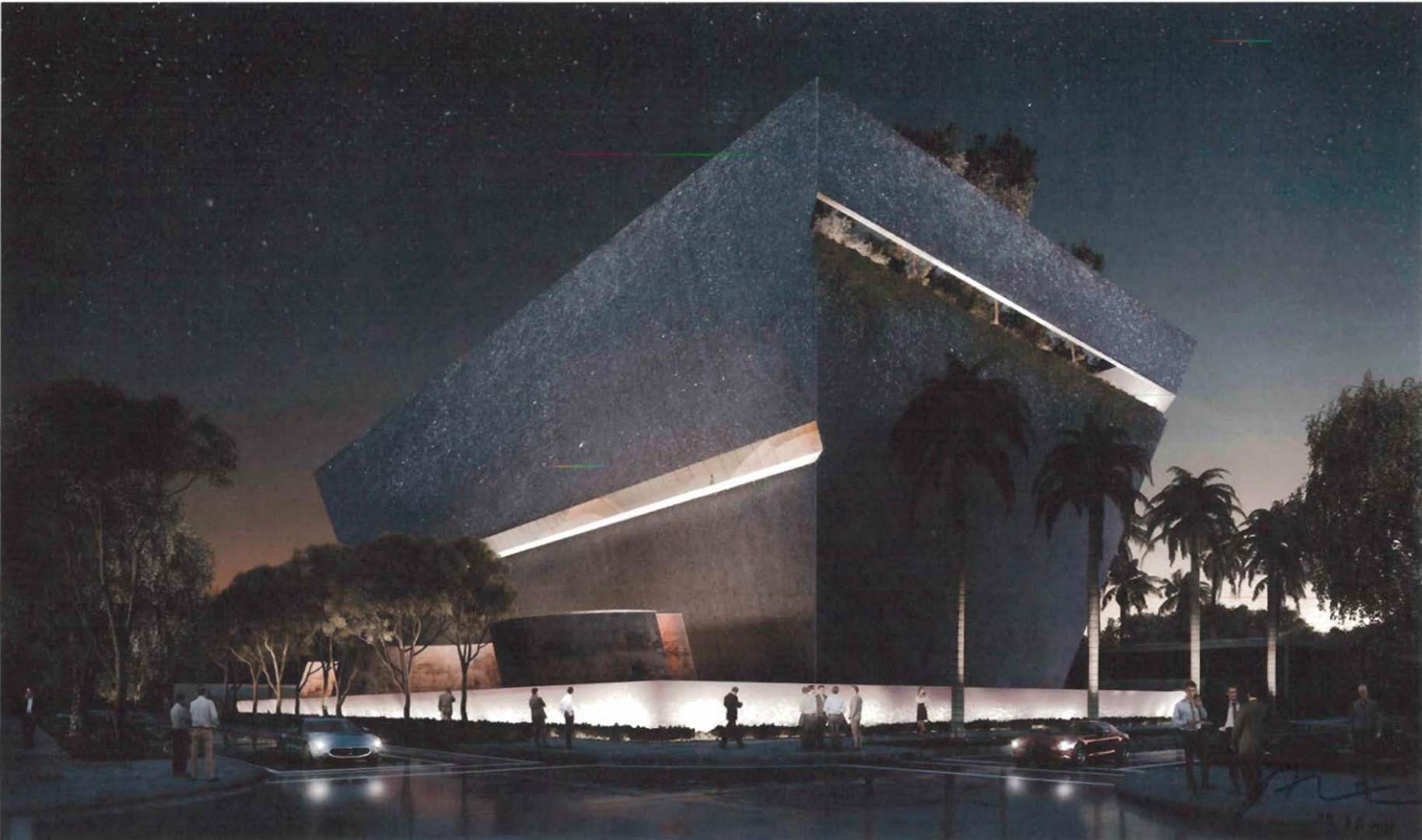 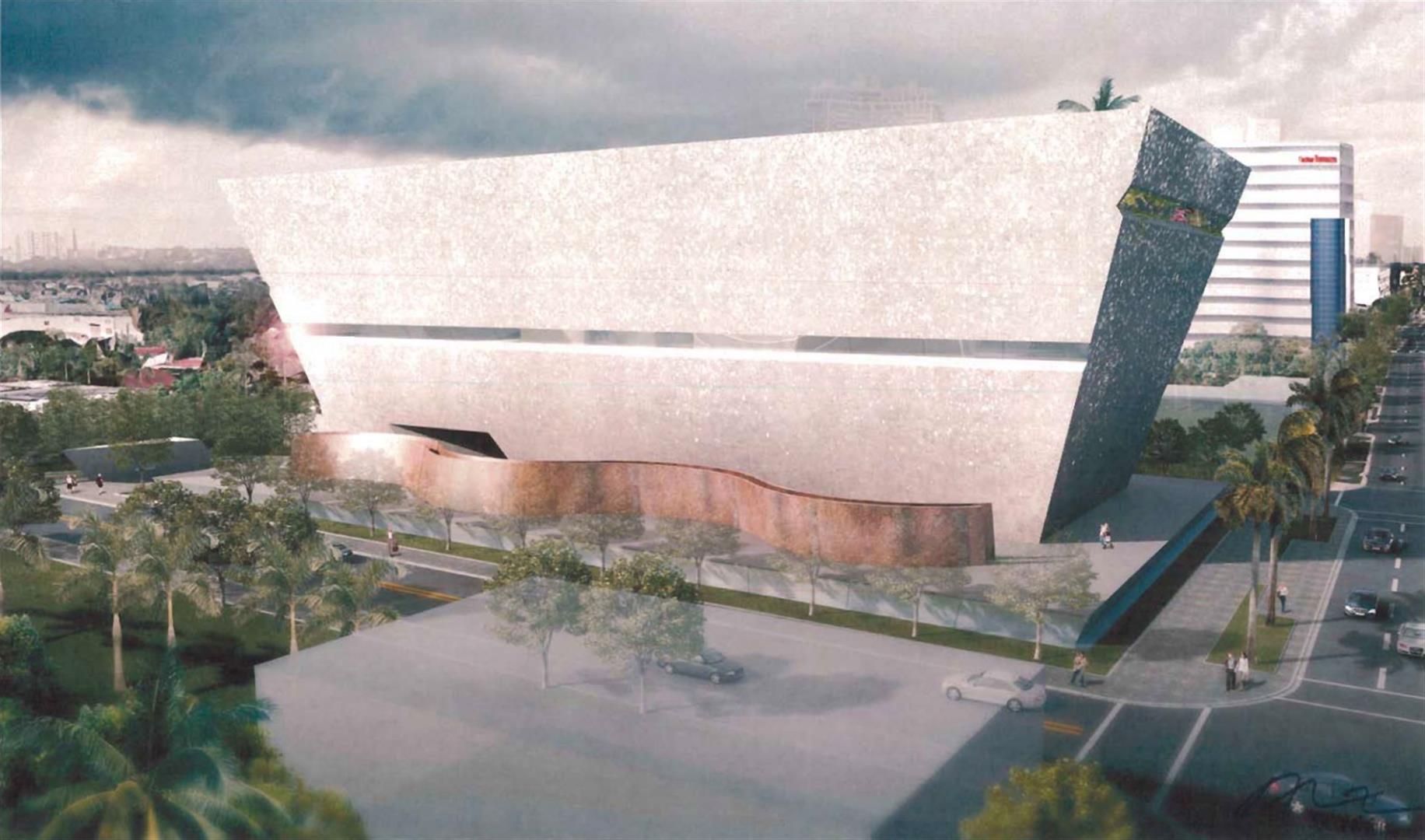 Fairholmes’ new headquarters will be housed on the upper floors of a windowless, inverted pyramid that will be built at 2626 Biscayne Boulevard, according to plans obtained exclusively by exMiami.

A museum will also be included in the building, with the ground and second level devoted to gallery space. Parking will be buried below grade.

The building might look ominous to passerby, but the interiors will be full of light. A mechanized sunlight system is planned for the roof, regulating natural light during the day. Inside, a massive, LED-lit aluminum sculpture created by James Turrel will be suspended from the roof of the building.

Fairholme’s office area will be open to the gallery below, and will include a kitchen with a wine cellar, a living area, a ‘sky room’, and a large terrace overlooking Biscayne Boulevard.

Artist Richard Serra is designing a 216-foot cortex steel sculpture for the plaza. Arquitectonica is handling architecture and landscape design.

Art collector Gary Nader’s Latin American Art Museum that Curbed spotted mysteriously announced on an obscure Latin American news website Tuesday is seriously legit, according to an article in the Miami Herald today. Mr. Nader will be displaying the plans, and a model, along with selections from his 600-piece private collection, which he plans to display at the museum, at his gallery in Wynwood during Art Basel.

Nader hasn’t picked a site yet, but he’s currently considering three potential sites on Biscayne Boulevard. That means (hallelujah!) it’s probably not going on Parcel B. The very cool looking 90,000 square foot museum, which was designed by architect Fernando Romero, will cost around $50 million, and will be financed by the construction of a $300 million, 300 unit luxury condominium tower on the same property, where units will range in price from $2 to $20 million. A “sculpture park” will be out front. Nader hopes to have the museum open by 2016.

AC Hotel By Marriott and Element By Westin In Brickell Reaches 8th Floor —...

The 24 story AC Hotel By Marriott and Element By Westin has reached the 8th floor after getting to the 4th floor in March. The building, which will have 264 hotel rooms, was built on the site of the former El Eden Motel , which was demolished at...

AC Hotel By Marriott and Element By Westin In Brickell Reaches 14th Floor —...

Located across the street from Brickell City Centre, the 24 story AC Hotel By Marriott and Element By Westin continues to rise as it reaches the 14th floor. The building will have 264 hotel rooms, 23,000 square feet of ground level retail and a...

Construction has started on the 20 story South Tower at Mr C Residences in Coconut Grove located at 2655 South Bayshore Drive, according to The Miami Herald. The Terra Group developed building will have 118 residences with prices starting at...

Another 70-Story Tower Has Just Been Announced For Brickell