A new mega project looks like it could be on its way to the Navy Yard in South Philadelphia! From renderings, it looks like it will consist of five revises in the 12-15 story range, as well as tons of new lowrises. The development will also finally bring real residents to the neighborhood, with 2,800 proposed residential units. Additionally, the project will bring 2.5 million square feet of Life Science Space, manufacturing space, and office space. The Navy Yard will now be broken down into multiple “districts.” Where the Navy Yard currently stands will now be branded as Historic Core District with a large swath of vacant land to the East set to be branded as the Mustin District, which will consist of North and South Mustin counterparts. It looks like the brunt of the residential space will be built in the Historic Core District, and this District has the most finalized design of the new areas so far. One high rise will be built here, in the fifth phase and will be titled “Kitty Hawk” South. It will hold 385 residential units, as well as 30,000 square feet of retail and amenity space. Unfortunately, have five is the last phase of this area, but that’s okay because the first four will be pretty exciting as well. Phase One will bring “Chapel Block,” three new mixed use buildings built adjacent to the existing historic chapel building. Between the three, 600 residential units will be built, as well as 75,000 square feet of office space, 96,000 square feet of retail/amenity space, and 230 hotel rooms. A 400 space parking garage will also be built during this phase. 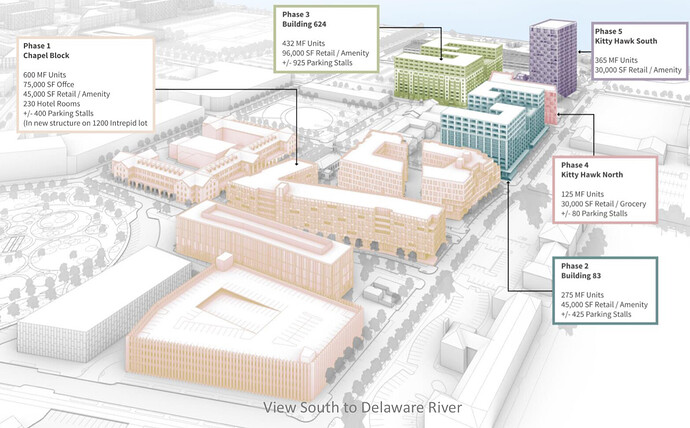 Overview of the first five phases. 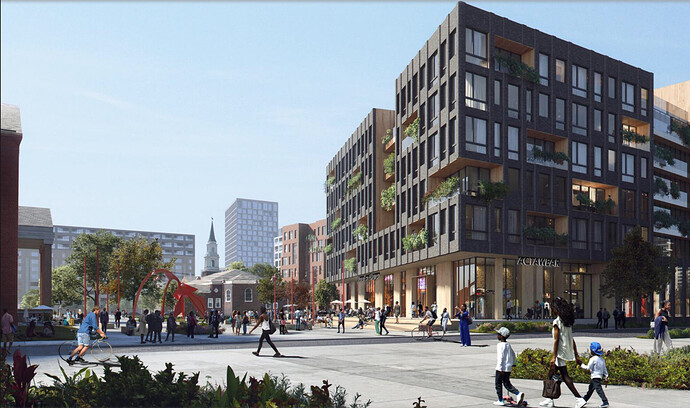 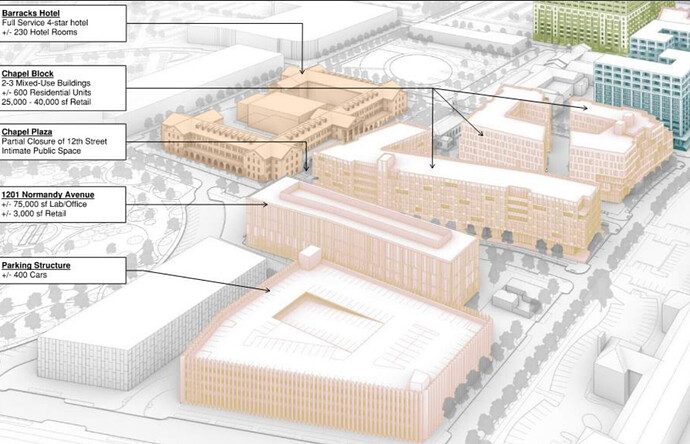 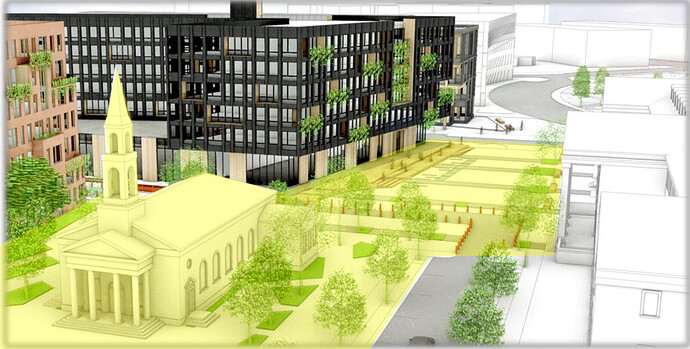 Mustin North will bring the bulk of the office and manufacturing space, with 10 two-story buildings set to rise here. It also looks like these have finalized designs, so this are of the project will probably be built after the historic core finishes up. This is the most unexciting section, though, because it’s really just a suburban office park. 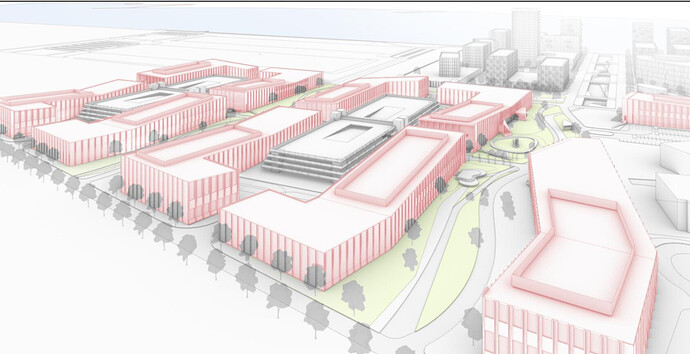 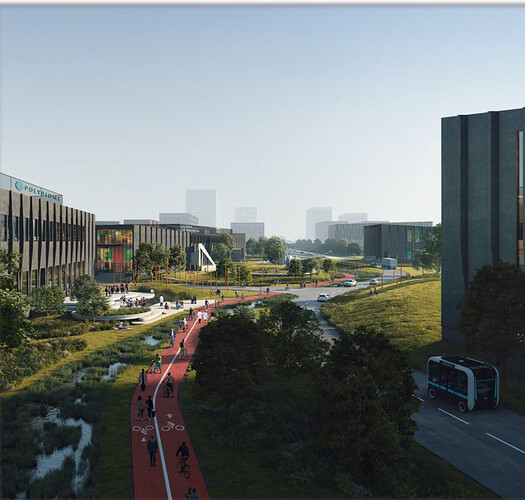 The most exciting area, though, is Mustin South. It looks like four high rises will be located here, centered around a cool water feature left over from the Navy Yard. This looks like it has the potential to become an a,as if mixed use neighborhood. Unfortunately, it seems like this part of the project is the farthest out, with no info on the buildings and no finalized designs. However, if this does happen eventually, it’s going to be insane!! 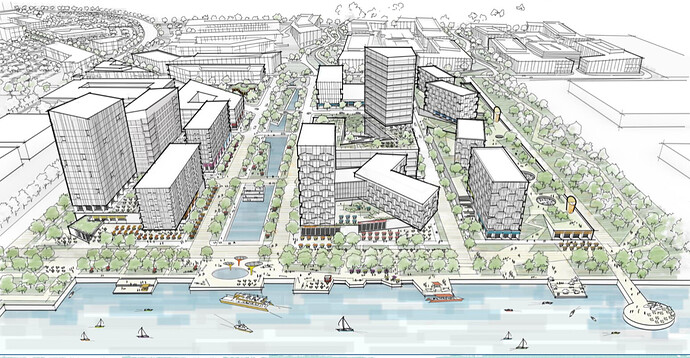 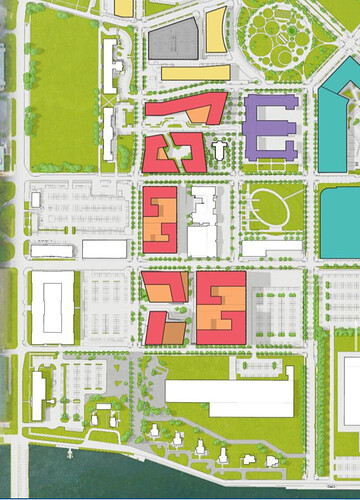 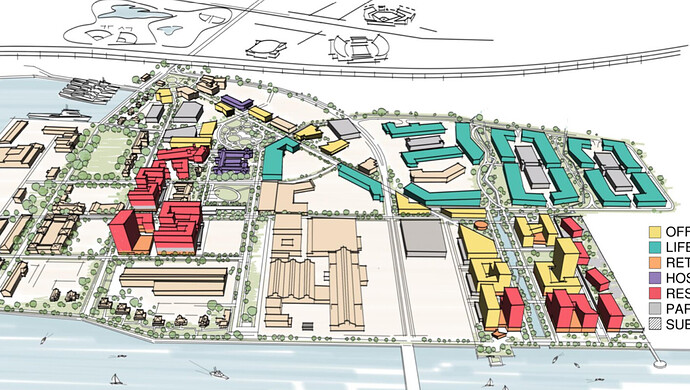 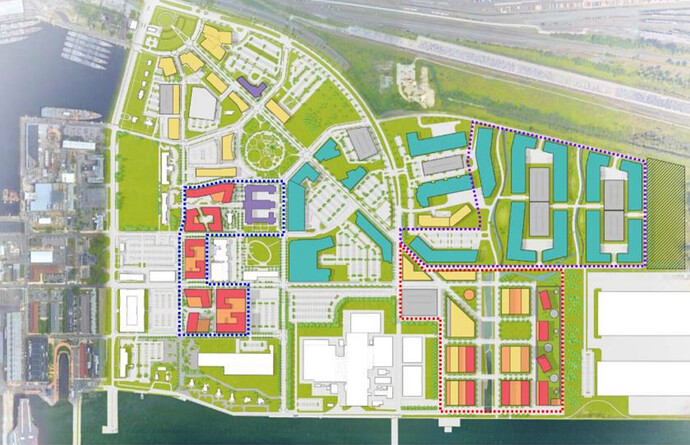 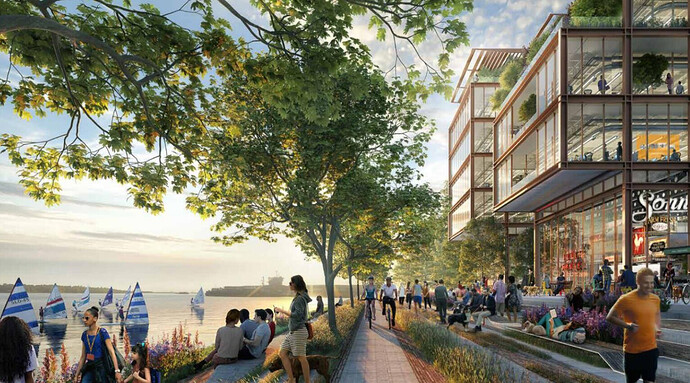 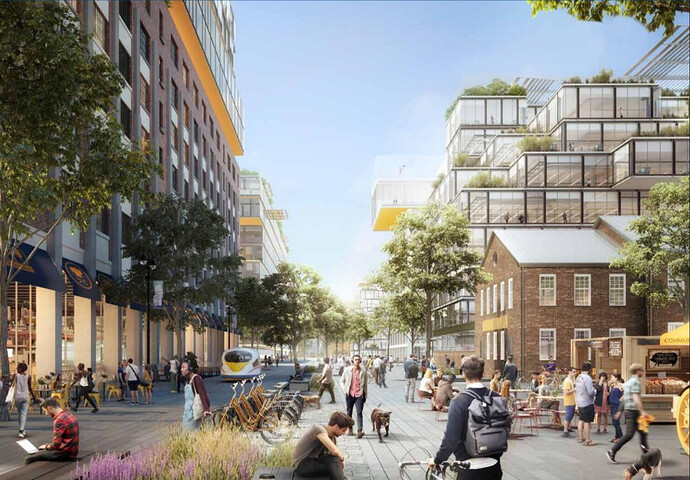 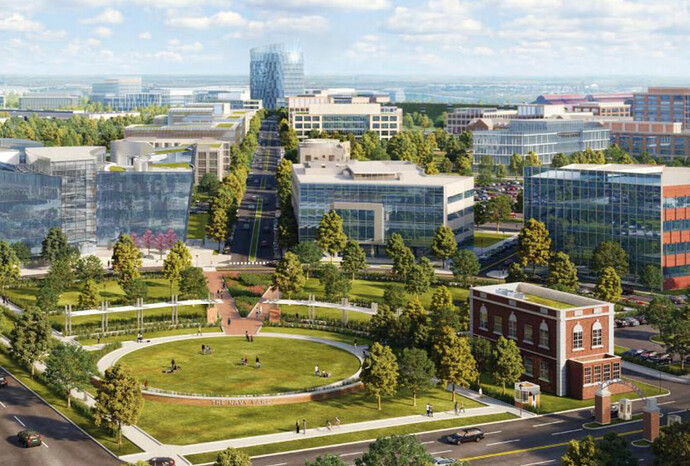 According to a member on Skyscraperpage, this is not the finalized master plan, and more are likely to come, although those will likely be more for the Mustin South area, as that is the one location without a finalized plan. It was also mentioned that a Broad Street Line Navy Yard Yard extension will be included in a finalized master plan, which is very good news. With the addition of thousands of new residents and thousands more jobs, not having rail transit connection would be a disaster here, this is becoming another hub for the Life Sciences industry like University City, and has tons of potential to grow. 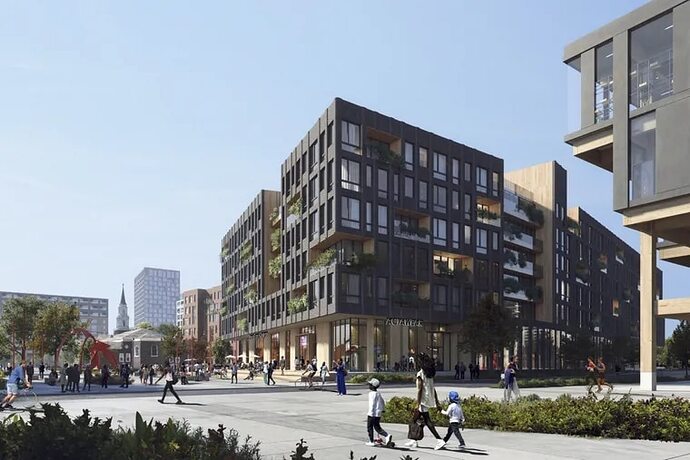 New labs and offices to rise at Navy Yard as part of recently chosen team’s...

The two projects are the first by Ensemble Real Estate Investments and Mosaic Development Partners at the former barracks in South Philadelphia.

Navy Yard’s first building will be built on spec and is expected to be finished by the end of the year. They are first building some of the commercial space, with the three story building set to house a lab/office tenant. The article also mentions that some, of the residential properties will also begin soon here in the first phase, with the construction of the 1,000-1,500 residential rumors planned in the Historic District. Very exciting to see this begin moving forward so quickly! 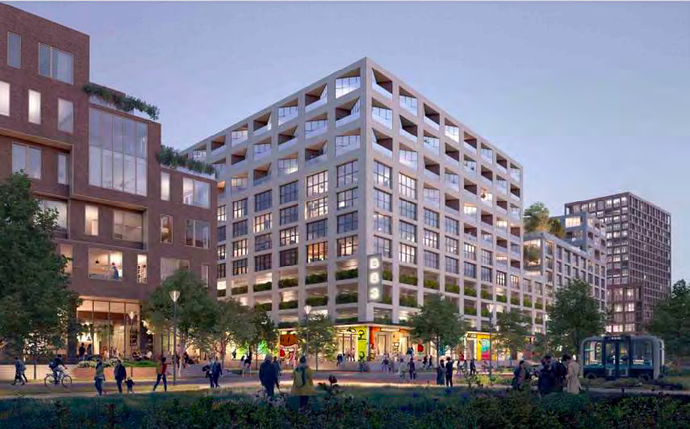 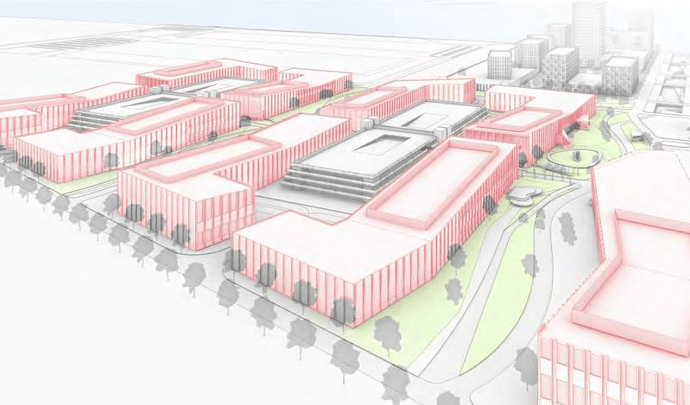 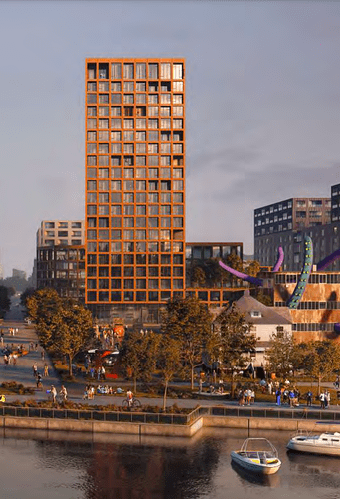 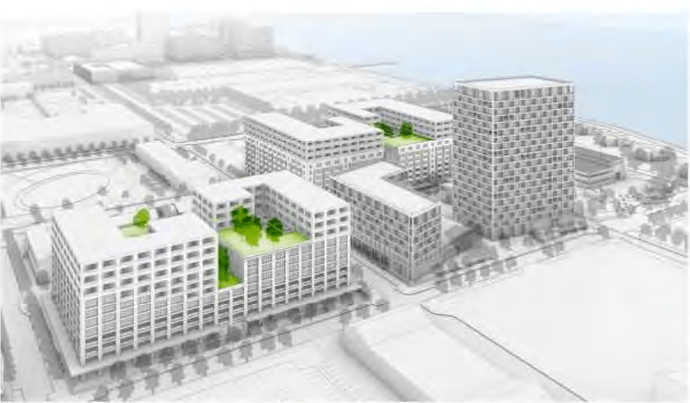 Quote:
A development team for 109 acres at the Philadelphia Navy Yard has fine tuned its initial plan for the site that involves $6 billion in new investment over the next two decades.

The build out is expected to result in 12,000 new jobs at the South Philadelphia property and continue its transformation. The plan calls for the development of an additional 8.9 million square feet of space involving lab and manufacturing space for life sciences companies along with buildings that will house 3,900 new apartments and 235,000 square feet for retailers and makers.

Of the money that will be invested, it is expected that $4.8 billion will be derived from the initiatives undertaken by the development team of Ensemble Real Estate Investments and Mosaic Development Partners.

The new plan touches on nearly every aspect of the 1,200-acre Navy Yard.

The team has come up with a plan that builds upon a foundation already established at the Navy Yard including its role as a thriving and growing hub for life sciences companies. And, with the addition of different types of uses beyond office and lab space, the plan seeks to create a walkable, mixed-use community that takes advantage of its location fronting the Delaware River by creating active and passive recreational areas.

Article behind paywall here. Renderings available to view in link below:
https://www.bizjournals.com/philadel...calls-for.html

^ Dunno about that link. I pulled it straight from someone elses comment so it may not work 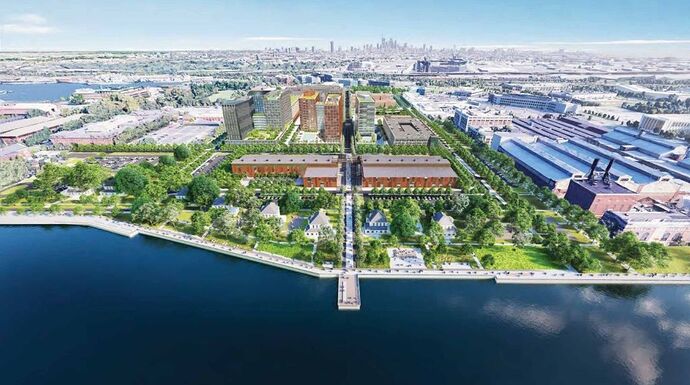 A $6 Billion Update Creates an Entirely New Neighborhood at the Navy Yard -...

One of the true victories of real estate development in Philadelphia over the last decade or so has been the emergence of The Navy Yard. This industrial 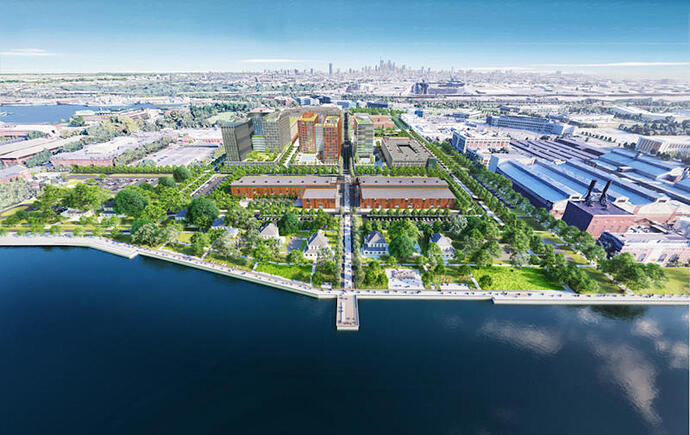 Thousands of people could live at the flood-prone Navy Yard. Will they be safe?

A new plan for the Navy Yard includes thousands of residential units, along with tools to mitigate flooding that include elevating structures and digging a canal. 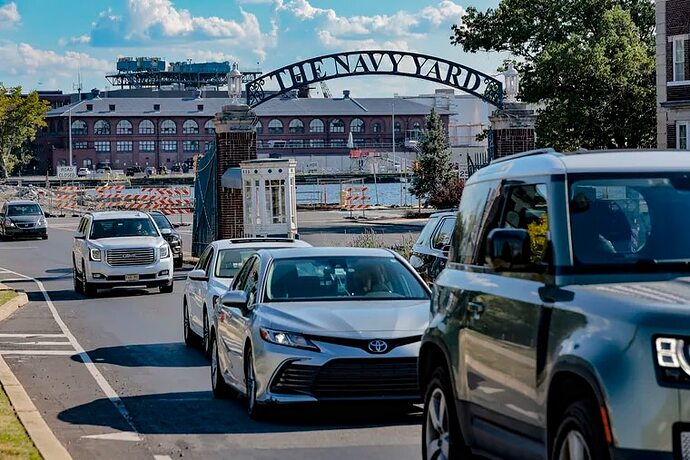 Different types of bus service are being explored at the South Philly jobs hub. Expansion of the Broad Street subway would be costly and take years.