Construction is making rapid headway at 5 Beekman, and the project’s residential component is now rising above Nassau Street. The site’s developer is GFI, and the architect of record is Gerner, Kronick + Valcarcel.

Shrouding along much of the Temple Court Building has been removed, revealing an exterior in the midst of refurbishment; the hotel will have 287 rooms, while the new residential tower will total 68 units, spanning 47 floors.

5 Beekman Street, shrouding has been removed from part of the old Temple Court Building

Despite construction’s progression above street level, on-site renderings are nowhere to be found, though zoning diagrams filed with the DOB give inklings regarding the tower’s form. The slender, 621′ skyscraper will apparently have rooftop ornamentation, complementing its historic counterpart, which was completed in 1883. Parapets could push 5 Beekman’s pinnacle to the 700′ mark, and the structure will leave a definite mark on the local skyline, though the 870-foot 8 Spruce Street will continue to dominate the vicinity.

5 Beekman, The Lara at left

Fencing and scaffolding covering an adjacent alley have yielded a large transient population, though the situation is likely temporary. 5 Beekman’s completion will further improve the neighborhood, revitalizing an empty old building, and breathing life into a relatively neglected corner of the Financial District.

Scary alley next to 5 Beekman

Momentum in the immediate vicinity seems to be increasing, and across the street, another tower will soon rise at 1 Beekman. The surge in new construction began with 8 Spruce and continued with The Lara, which is immediately adjacent to the future 5 Beekman’s residential component, which is actually rising at 115 Nassau Street.

Completion is likely by 2016, with the hotel component set for a 2015 opening date.

Any day that brings more information about the hotel and condos coming to historic Beekman Street is a good day. The Beekman unveiled pricing (h/t The Real Deal) for its 68 condominiums, which will...

Rendering courtesy of The Beekman

The Beekman has a rendering of the tower as their profile pic on Instagram, but it’s only 150x150 pixels.

I walked by today. It seems that the facade will be faux stone with design imprinted on it.

Starting to make an impact:

I can’t wait fir J&R to be redeveloped.

Latest from the CTBUH: 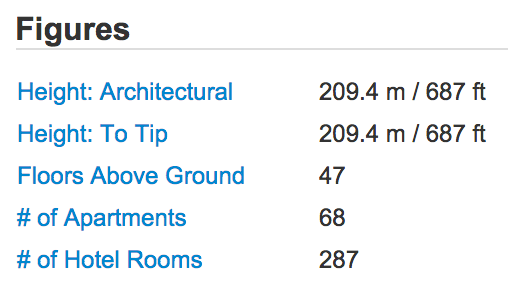 For what it’s worth: 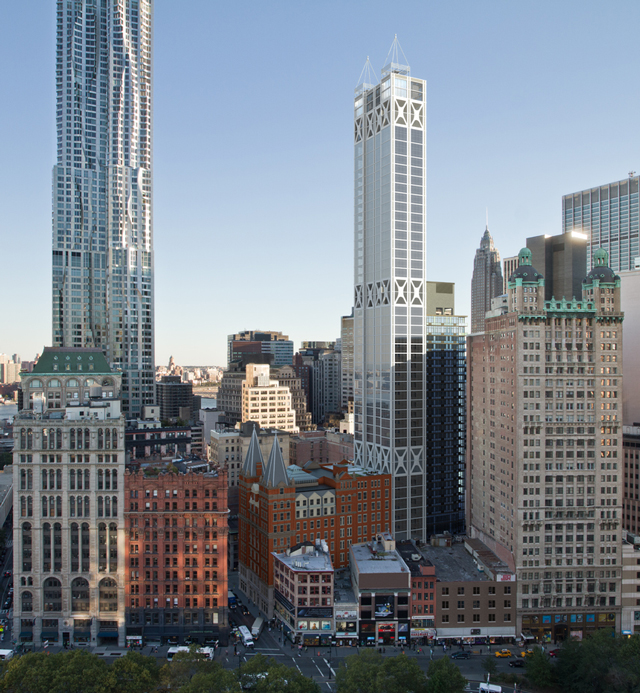 While 5 Beekman renderings have been released sporadically, with a first look hidden within the depths of a New York Magazine article, YIMBY has a fresh perspective of the development — this time, featuring images that have not been steeped in an Instagram filter. And without the overly saturated colors, the building actually looks quite attractive.

Gerner Kronick + Valcarcal is designing the 47-story tower — located at 115 Nassau Street — which will rise on the backside of the Temple Court Building, at 5 Beekman Street. While the Temple Court is being turned into a 287-room hotel, its skyscraper sibling will have 68 condominium residences. 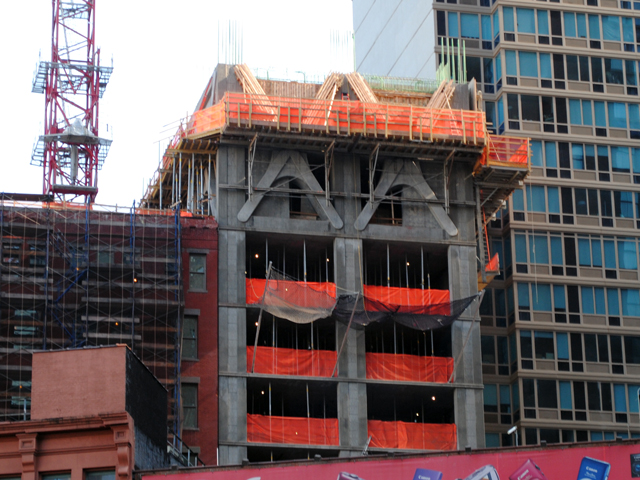 Exposed structural elements accentuate the skinny tower’s rise, and add to a skeletal appearance, which is further enhanced by cladding that appears to be cast-concrete. While previous renderings of The Beekman bathe the facade in sepia undertones, it will actually be white, offering a bright and refreshing contrast against grittier pre-war surrounds.

The most obvious homage to the Temple Court Building is located at the top of 115 Nassau, where two pointed pinnacles echo the parapets atop its shorter neighbor. These take The Beekman’s total height to approximately 700 feet, making it one of the tallest residential buildings in Lower Manhattan.

The surrounding neighborhood is seeing rapid changes, which largely began with the construction of 8 Spruce Street. Since the late 2000s, buildings have risen at 33 Beekman and 113 Nassau, and additional developments are planned at 19 Beekman, as well as the J&R site, at 1-15 Park Row.

5 Beekman will become the highest-end development in the vicinity, which is on the northern edge of the Financial District. As remaining opportunities for new construction dwindle, prices in the neighborhood will continue to increase, as zoning and the state limit on residential FAR cap built potential to unreasonably low levels. This is despite proximity to the Fulton Transit Center, and a range of other subway stations, which make the location one of the most accessible in New York City.

GFI Capital is developing the project, and it is has risen quickly since climbing above ground level earlier this year, with completion expected by late 2015. 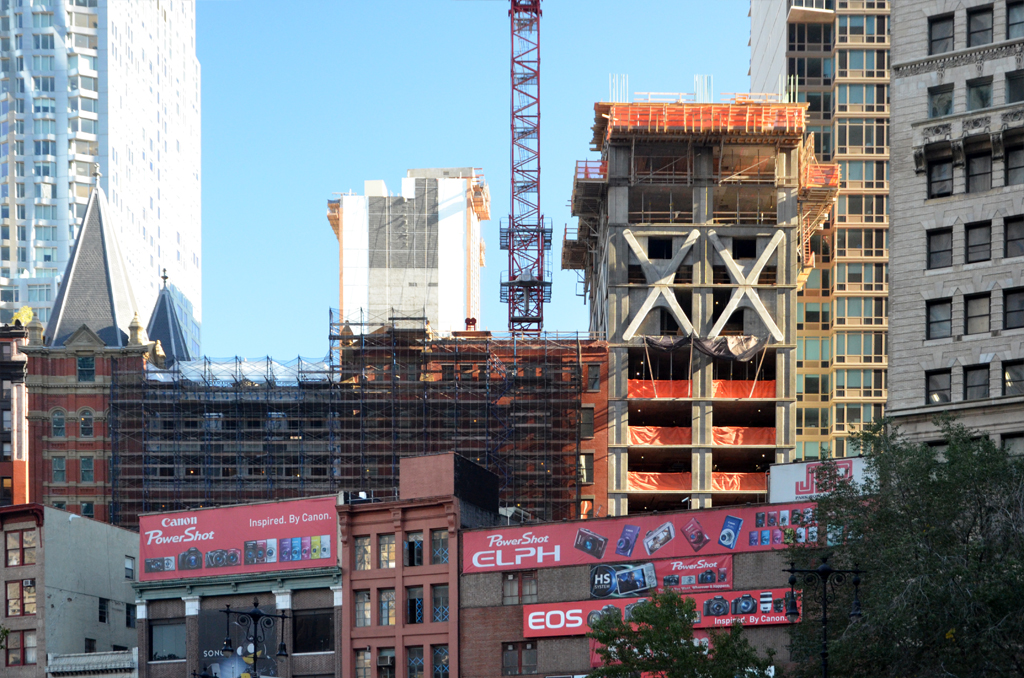 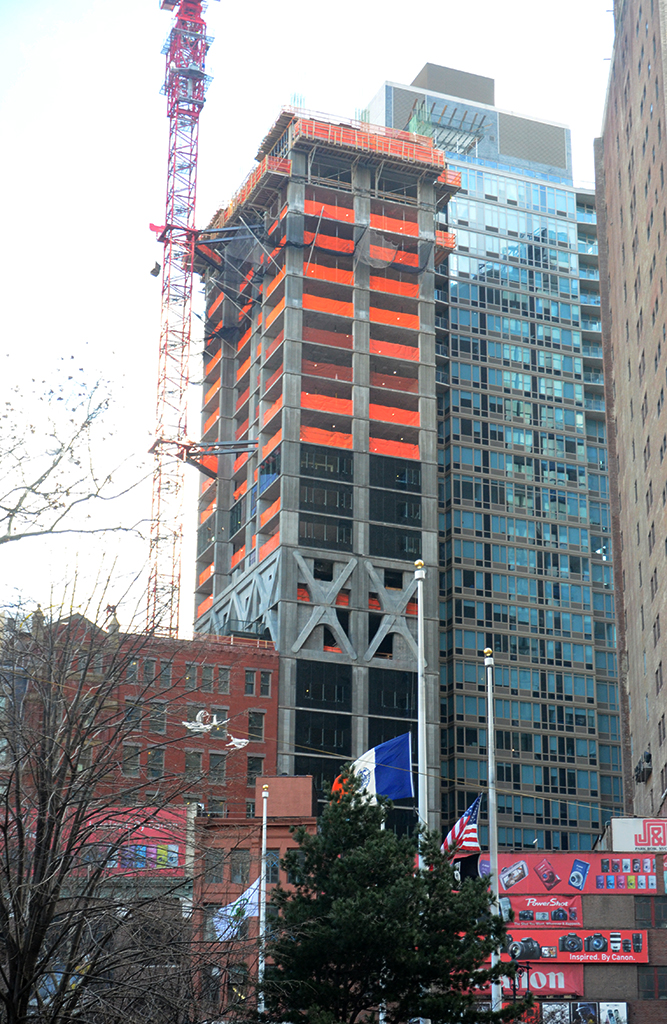 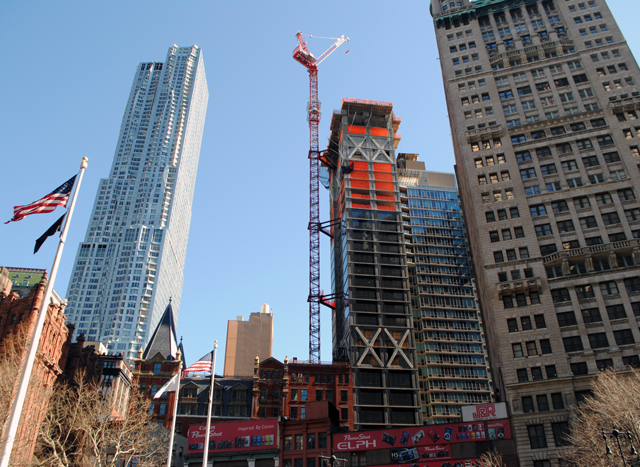 Last time YIMBY checked in on 5 Beekman Place, which also has an address of 115 Nassau Street, the building was reaching its first mechanical floors, and stood shorter than surrounding structures. Now, six months later, the project is close to topping-out, standing roughly a dozen floors shy of its ultimate pinnacle.

Gerner Kronick + Valcarcal is the architect and GFI Capital/GB Lodging are the developers. The new tower will eventually total 47 floors and 700 feet, with two parapets included to echo the adjacent Temple Court Building, which is being converted into a hotel. The tower has been dubbed ‘The Beekman’ and will have 68 condominiums in total, while the hotel portion of the project will have 287 rooms. 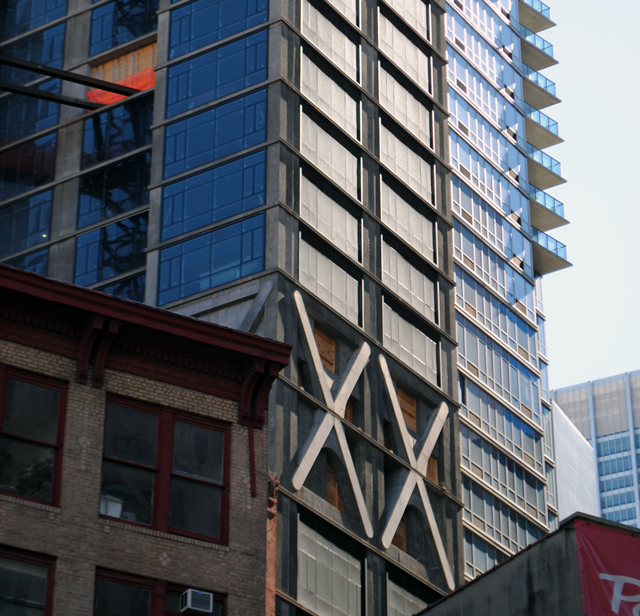 Glass has also risen around much of what’s already been built, offering a decent idea of what the final product will look like. While the building will be over 700 feet tall, its prominence will be muted by 8 Spruce Street just a block away, which will still tower over its new neighbor by nearly 200 feet. 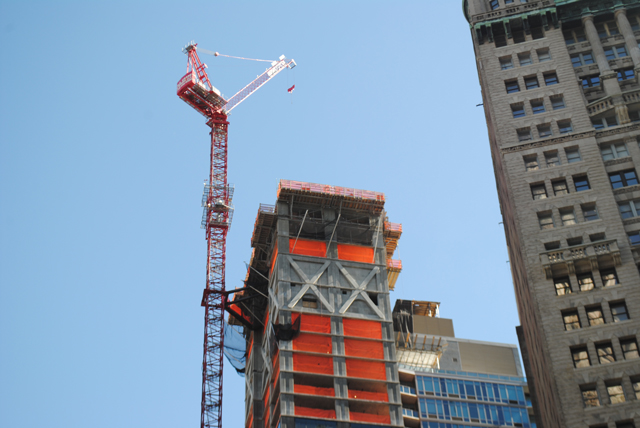 While 57th Street certainly has the tallest new residential towers in New York, the Financial District comes a close second, and its new buildings are even more numerous. Besides 5 Beekman, 30 Park Place (937′), 56 Leonard (821′), and 50 West Street (783′) are also under construction, and the neighborhood’s first supertalls are possible at 125 Greenwich (a tentative 1,356′) and 80 South Street, which was recently in the news as a potential contender for the city’s tallest building. 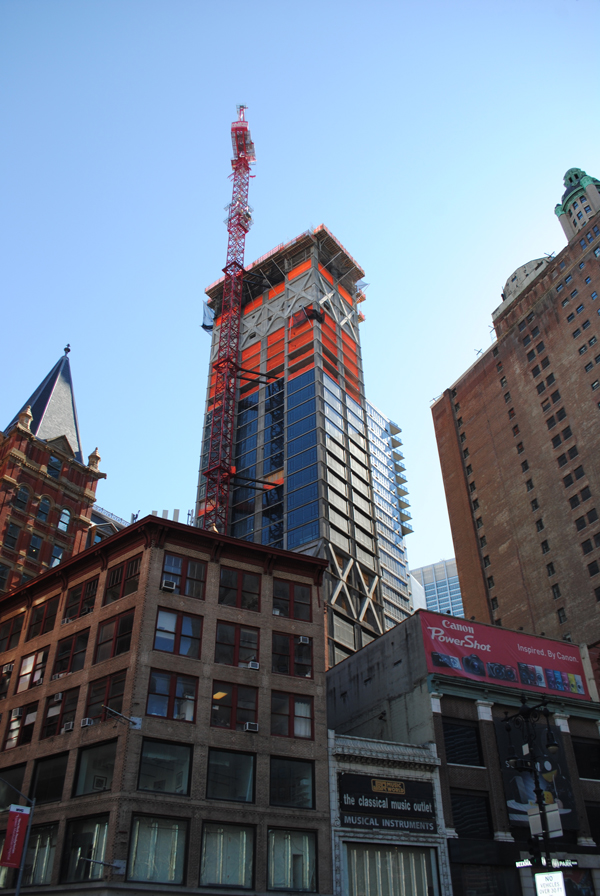 Despite 5 Beekman’s relative lack of impact, it will still form an attractive spoke on a rapidly growing skyline, and completion is expected by late 2015.

Pic taken by me

Can see the tower on the right.

I walked by early this evening. It looks good!