http://www.crainsnewyork.com/apps/pbcsi.dll/storyimage/CN/20140723/REAL_ESTATE/140729933/AR/0/Youngwoo.jpg?q=100&cci_ts=20140723134144
Five years after developer Youngwoo won the right to redevelop the Hudson River Park’s badly deteriorated Pier 57 at the foot of West 15th Street, a new partner looks likely to step aboard to help get the effort moving.

Big changes are looming at Pier 57 on the Hudson River at the foot of West 15th Street. Five years after Youngwoo & Associates first won the right to develop a massive, mixed-use project known as Superpier in the heart of Hudson River Park, it looks like the company will bring in another firm to help bring the project to fruition, Crain’s has learned.

RXR Realty is rumored to be interested in stepping aboard and is in negotiations to do so. The size of the stake it or others might ultimately take and level of control they might get in return for transforming the badly deteriorated 560,000 square-foot dock are unclear.

As part of the public-bidding process, Youngwoo also won the rights to a 49-year lease on the pier, and the firm is currently negotiating details of that lease with the Hudson River Park Trust, a government-created public benefit corporation that administers the park of which Pier 57 is a part, according to the agenda of the Trust’s board of directors meeting that was held Tuesday evening.

Five years after developer Youngwoo won the right to redevelop the Hudson River Park's badly deteriorated Pier 57 at the foot of West 15th Street, a new partner looks likely to step aboard to help get the effort moving.

Welcome back to Camera Obscura, Curbed's series of photo essays by Nathan Kensinger. This week, as part of an ongoing series on soon-to-change neighborhoods, Kensinger visits Pier 57, the future S...

Looks like construction or demo is taking place already. (They secured most of the construction loan almost a year ago) Ill have to get better shots next time. Apparently google is still signed on to take half the space. Still unclear whether Bourdain will put his market here or not… Construction is underway on the renovation of Pier 57 at the Hudson River Park in Chelsea. The pier originally opened in 1954 as an ocean liner pier for cargo and passenger services. At the time of its opening, the pier was the largest dock... 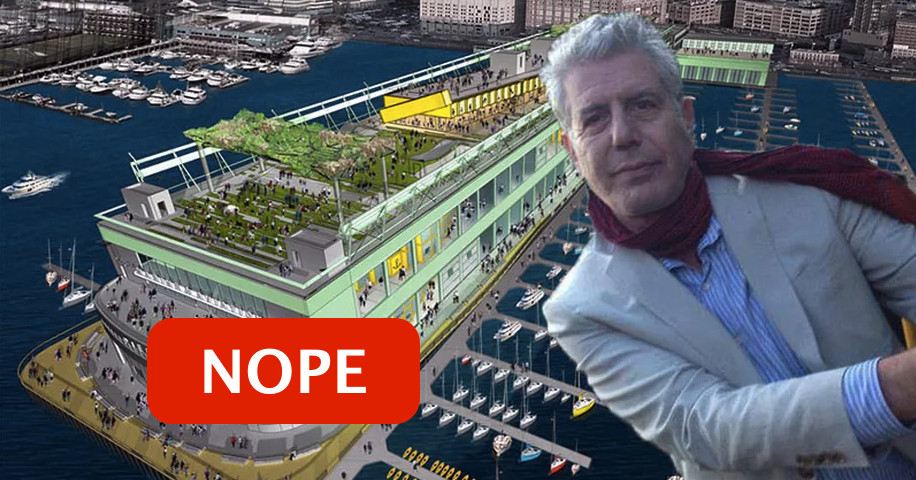 Anthony Bourdain announced it was an "especially complicated" site