Put aside the public theater—some rude satire about Forest City Ratner’s new Chinese partner, a couple of literal dog-and-pony shows, some told-ya-so’s from both sides—a curious, partial consensus on Atlantic Yards was vocalized by both critics and proponents at a hearing last night.

Build Atlantic Yards now, they said, to deliver the benefits, predominantly affordable housing, given the promised 2250 subsidized units among 6430 apartments in 16 towers, only one under construction.

But it wasn’t that simple, given vastly different levels of trust in the developer, That’s why the atmosphere inside the auditorium at Long Island University sometimes got heated in a hearing that began shortly after 5:30 pm, lasted past 10 pm, and drew perhaps 140 people, a majority of them project critics. Proponents want hands off, critics a new oversight entity.

Atlantic Yards supporters, many working off the same talking points, called for an expedited review and approval of the pending documents before Empire State Development (ESD), the state agency charged with overseeing and promoting Atlantic Yards: the Draft Supplementary Environmental Impact Statement (Draft SEIS) and changes to the Modified General Project Plan to cut parking and shift some bulk from Phase 1 to Phase 2.

“Benefits cannot be realized if there continues to be litigation regarding the project,” stated numerous people, including union members, representatives of Business Improvement Districts, and those connected to the Atlantic Yards Community Benefits Agreement, but also others who cited benefits like jobs or new business. “It is very important that we do not put any more restraints on this project.” (See talking points at bottom, distributed by Forest City.)

But ESD (also known as Empire State Development Corporation) in 2009 agreed to let Forest City have 25 years, rather than the oft-cited ten years (and the 15-year period studied in the environmental review, on the effects if delayed), to build the project and a state judge slammed the agency for misleading the public, and thus ordered this new environmental review.

The first tower, B2, was delayed as Forest City conceived its cost-saving modular plan, and a once-announced two-year construction schedule has been delayed another year.

Plan Expedited for Affordable Housing Near Barclays Center in Brooklyn

After 11 years of delays, lawsuits and a recession, the developer behind the Atlantic Yards project has agreed to greatly accelerate the construction of affordable housing in a deal that involved delicate negotiations with state officials, the de Blasio administration and a coalition of community groups.

Atlantic Yards, one of the largest building projects in recent New York history, was supposed to feature a basketball arena as a centerpiece and include thousands of apartments affordable to poor, working- and middle-class families who were being shut out of a rapidly gentrifying area near Downtown Brooklyn.

But while the $1 billion arena, Barclays Center, opened to acclaim in September 2012, not one apartment building has been built — a bitter disappointment for some residents who have watched rents soar beyond their reach.

Now, the developer, Forest City Ratner, facing pressure from public officials and community groups, has signed a formal agreement with the state, which oversees the project, to put housing construction into high gear and finish 2,250 affordable apartments by 2025, 10 years ahead of the current schedule.

“New York State is delivering a deal that will ensure this vital housing is built quickly and efficiently and that the community is engaged in every step of the project,” Gov. Andrew M. Cuomo said on Thursday. “This agreement is a win for the state and most importantly Brooklyn residents who will finally begin to see affordable buildings being constructed in their neighborhoods.”

Under the agreement, the next two residential buildings — a total of 600 units — will be entirely affordable housing. If the developer fails to begin construction within the next year, it must pay what would essentially be a fine of up to $5 million.

“We are determined to jump-start affordable housing at Atlantic Yards,” Mayor Bill de Blasio said on Thursday. “The agreement means two 100 percent affordable buildings will go in the ground starting next year, with units serving a more diverse range of families. And what’s remarkable is that we’ve secured nearly twice as many affordable units for our city investment.”

http://ny.curbed.com/uploads/Screen-Shot-2014-08-04-at-8.20.41-AM.jpg
[Master plan map of Pacific Park. All of the buildings between Pacific Street and Atlantic Avenue will be built on the platform.]

[Looking north on Carlton toward 535 Carlton Avenue, the next Atlantic Yards building. Rendering by COOKFOX.]

Atlantic Yards is shedding its past. In 2003, Forest City Ratner created the megaproject moniker when the developer announced its plans to build 16 towers and a new basketball arena over 22 acres in Brooklyn. Now, eleven years later, with the arena open, one tower rising, and a plan to fast track the remaining 15 buildings, Forest City is ditching its original name and rebranding the project as Pacific Park. In an interview Friday, Forest City CEO and President MaryAnne Gilmartin said that the new name coincides with a new phase of the project, with work moving “from pre-development to vertical.” While the development will forever be known as Atlantic Yards—there is a movie about it, after all—Pacific Park will be the new community that’s being built. Probably doesn’t hurt that a new name also sloughs off associations with past lawsuits, controversies over eminent domain, and visceral community opposition. Forest City is also bringing on a new architect, COOKFOX.

The key to the next phase of Atlantic Yards is Forest City’s recent partnership with Greenland USA, a subsidiary of Chinese development firm Greenland Holding Group. The two companies officially sealed the deal at the end of June, the same time they announced a much speedier timeline for the full project build-out. The developer must produce 2,250 units of affordable housing by 2025 or else risk a $5 million fine. As such, the next of the 15 buildings to go into the ground will be 100 percent affordable. Greenland has developed many mixed-use and affordable projects in China, and I-Fei Chang, CEO and President of Greenland US, stressed that they believe a variety of incomes is “what makes a city successful.” The affordable units will be available to families making a range of incomes, from $48,000 or less and up to $104,000.

Greenland Forest City Partners, the official name of the joint development, hired the sustainable building experts at COOKFOX to design the next two buildings, which will sit beside a new park. The first building to to begin work will be 535 Carlton Avenue. Thankfully, the rebranding also drops the completely confusing “B” numbering system and gives the buildings real addresses, a fact that COOKFOX partner Rick Cook said was “extremely important” to his studio. “We want these to be urban buildings, not towers in a park. If the address is on Carlton Avenue, the building entrance will be on Carlton Avenue.”

With each new building will come a chunk of a new eight-acre park designed by landscape architect Thomas Balsley. Pacific Street between Carlton and Vanderbilt Avenues will be demapped to create the park (thus its influence on the new name), which is being designed as a “specifically public” green space. Even the lobbies of 535 Carlton and 550 Vanderbilt are being designed in such a way that when passers-by on the street look in, they’ll see straight through to the park.

Much was made over B2’s use of prefabricated building techniques, but much was also made of the tower’s deadline being pushed back about a year, to late 2015. But Forest City isn’t giving up on modular. “It is my great hope that we will use it again in Pacific Park,” said Gilmartin, but she also noted that “it’s an ongoing experiment” that “needs to be validated with a standing building.” She added, “it would be shortsighted to launch more right now.” That said, Forest City made a serious investment in the technology, forming a partnership with engineering firm Skanska and creating a modular factory in the Brooklyn Navy Yard.

All of the new buildings fit within the Frank Gehry-designed masterplan, and when complete, the whole shebang will have 6,430 units of housing spread out over 6 million square feet. There will also be 247,000 square feet of retail (all small spaces, no big box stores), and at least 336,000 square feet of commercial space; the plan allows a variation that could create up to 1.6 million square feet of commercial. While all 2,250 units of affordable housing must be delivered by 2025, 10 years sooner than under the original timeline, Forest City and Greenland believe that the entire project will be built-out by 2025, too. So the neighbors better get ready for a lot of construction.

From dot cameras: The Green Roof

Just one of many for the area. 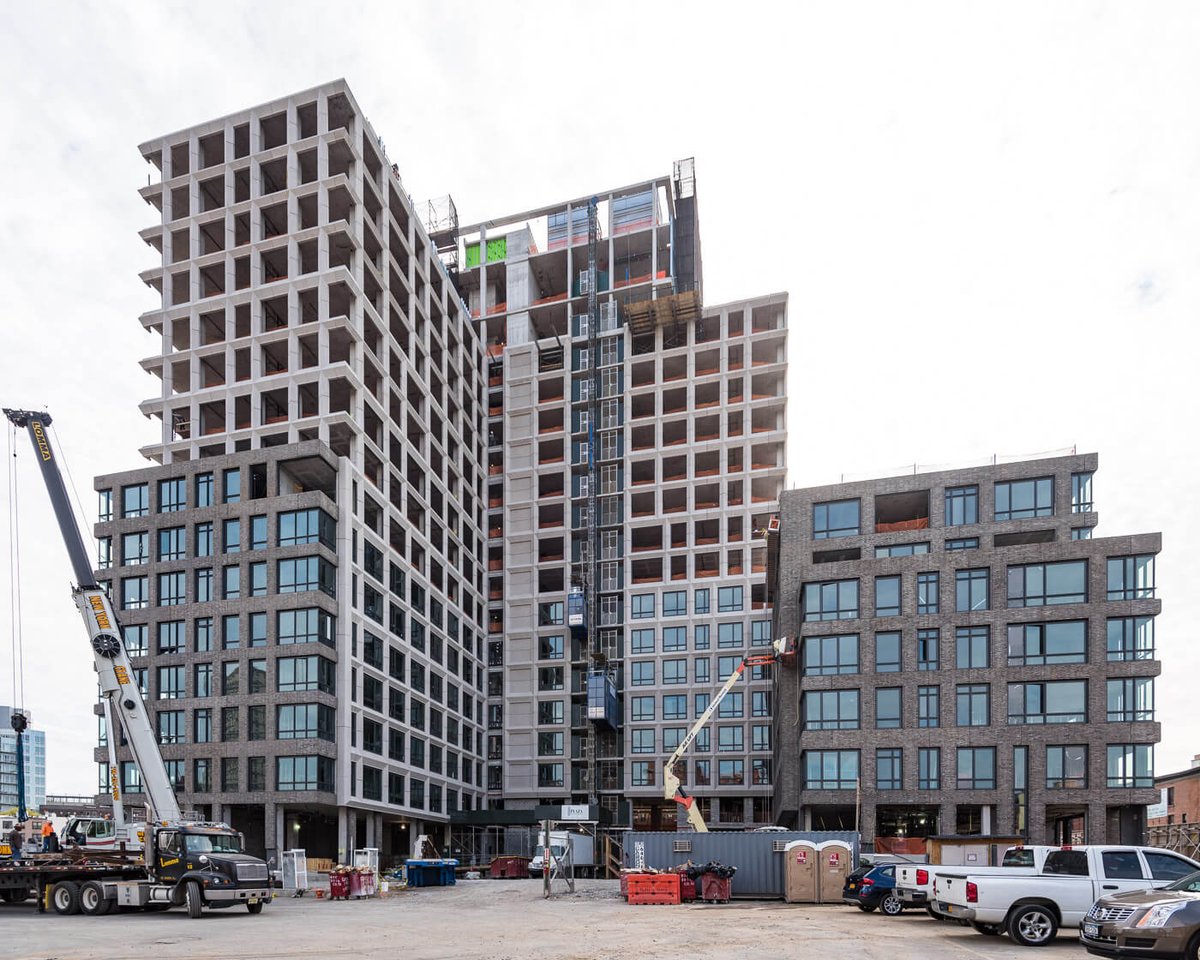 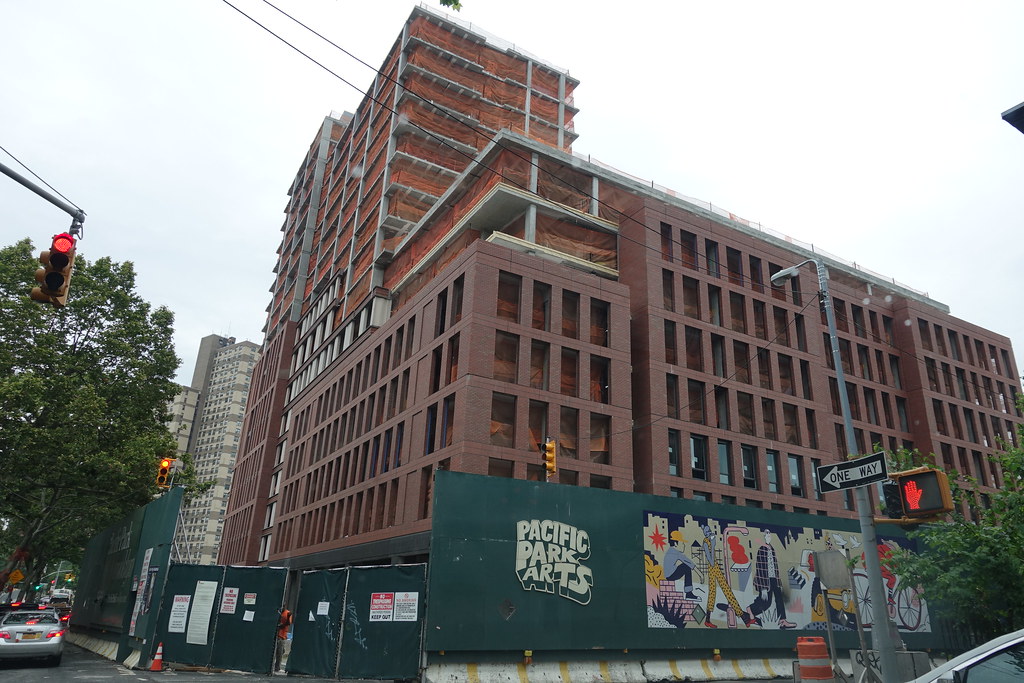 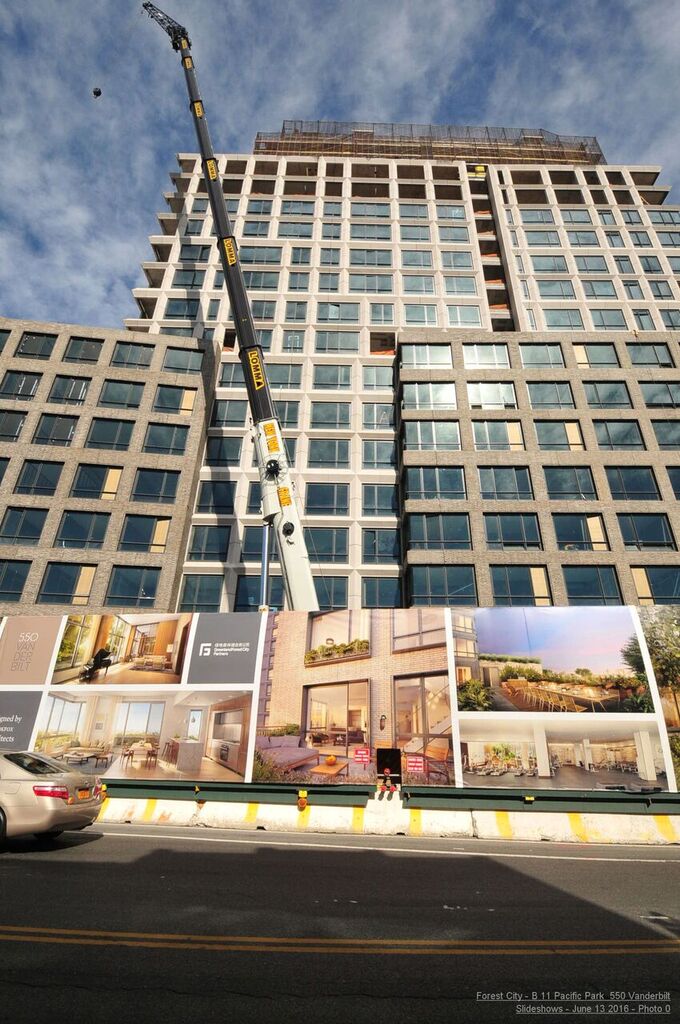 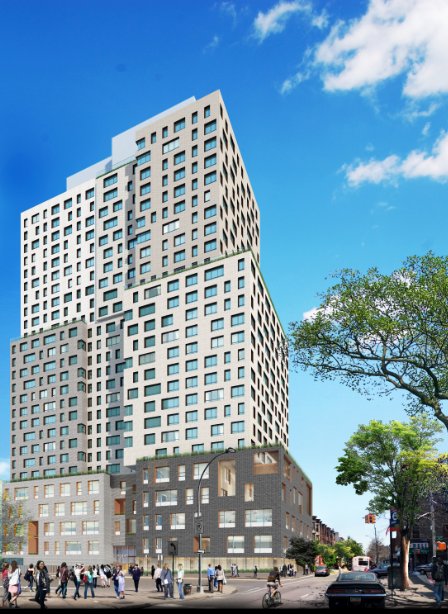 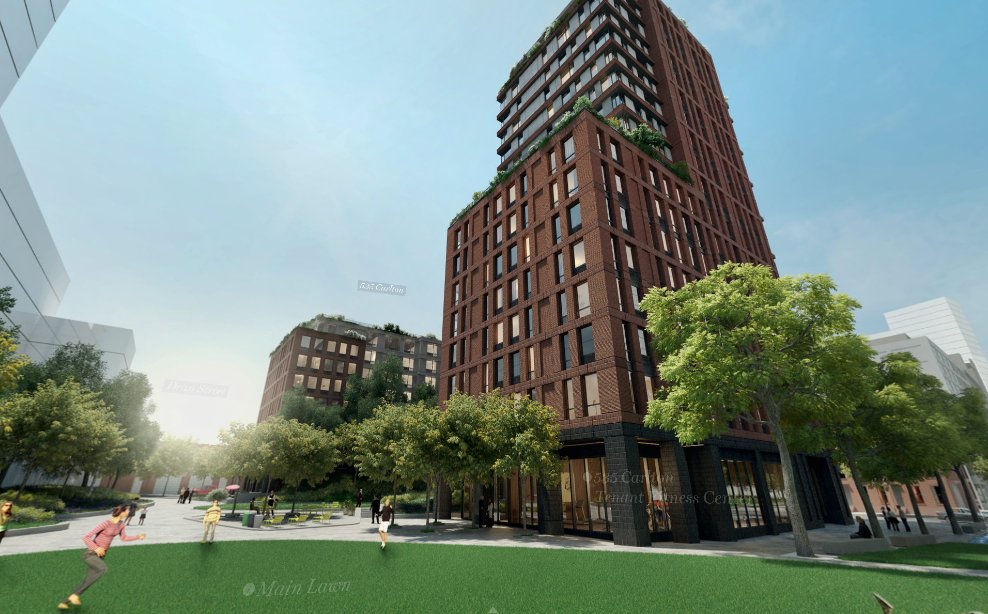 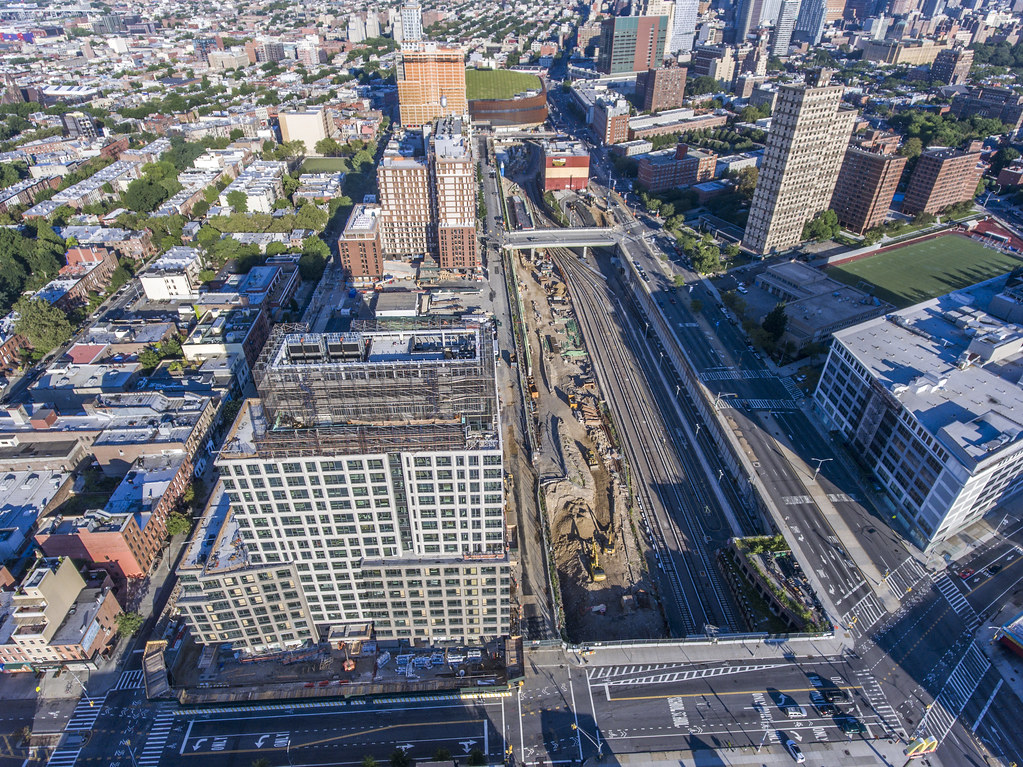 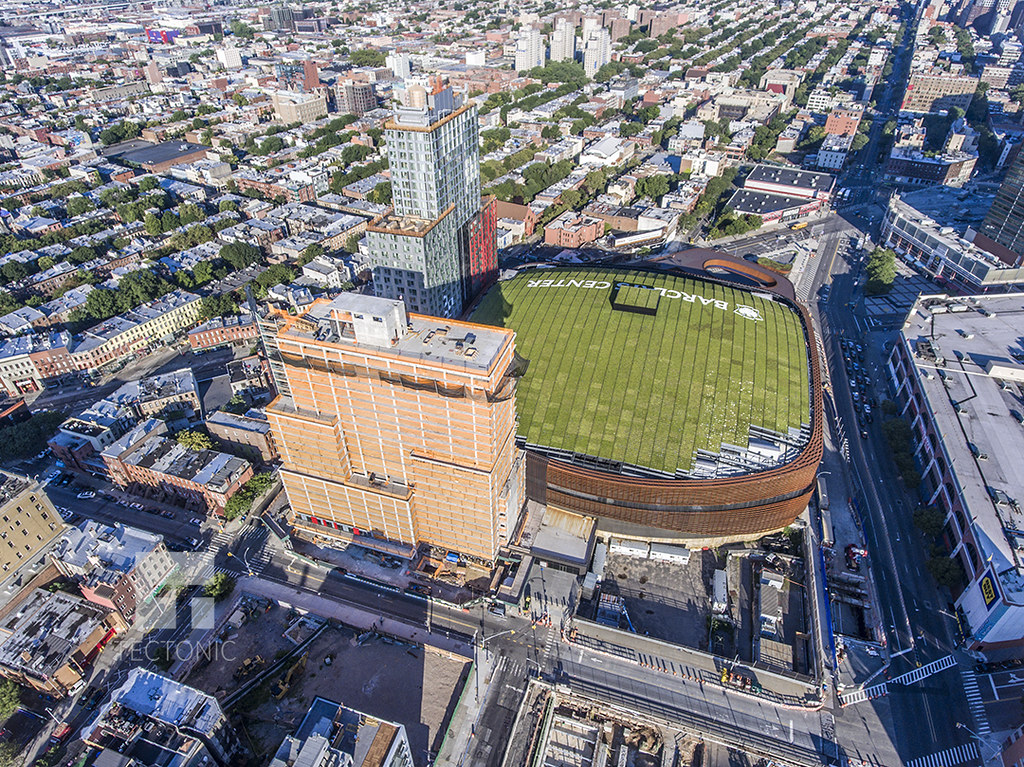 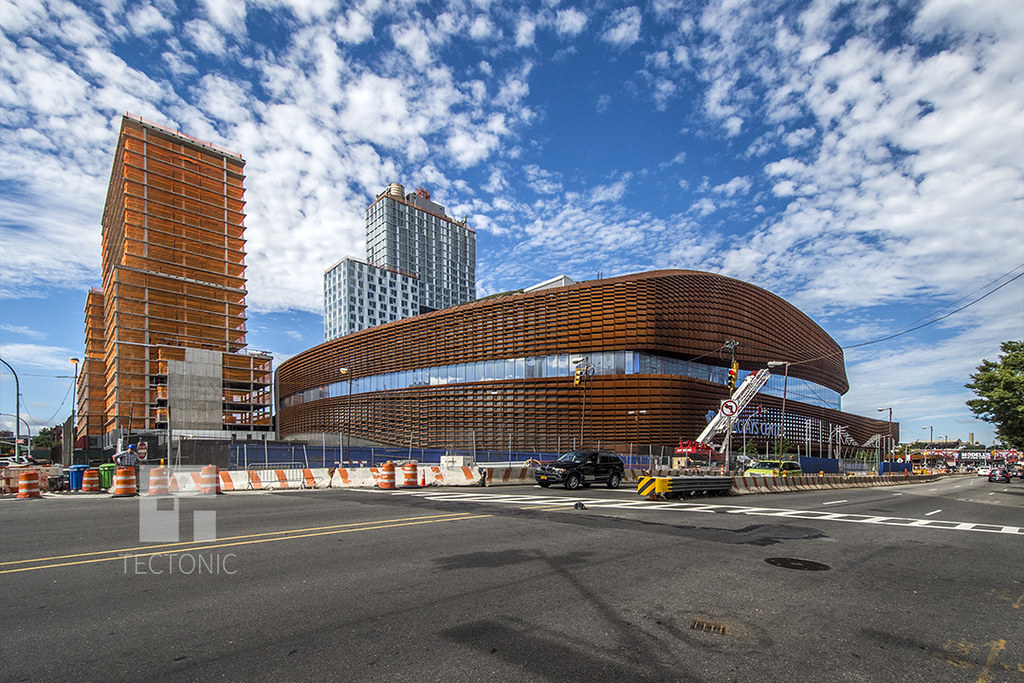 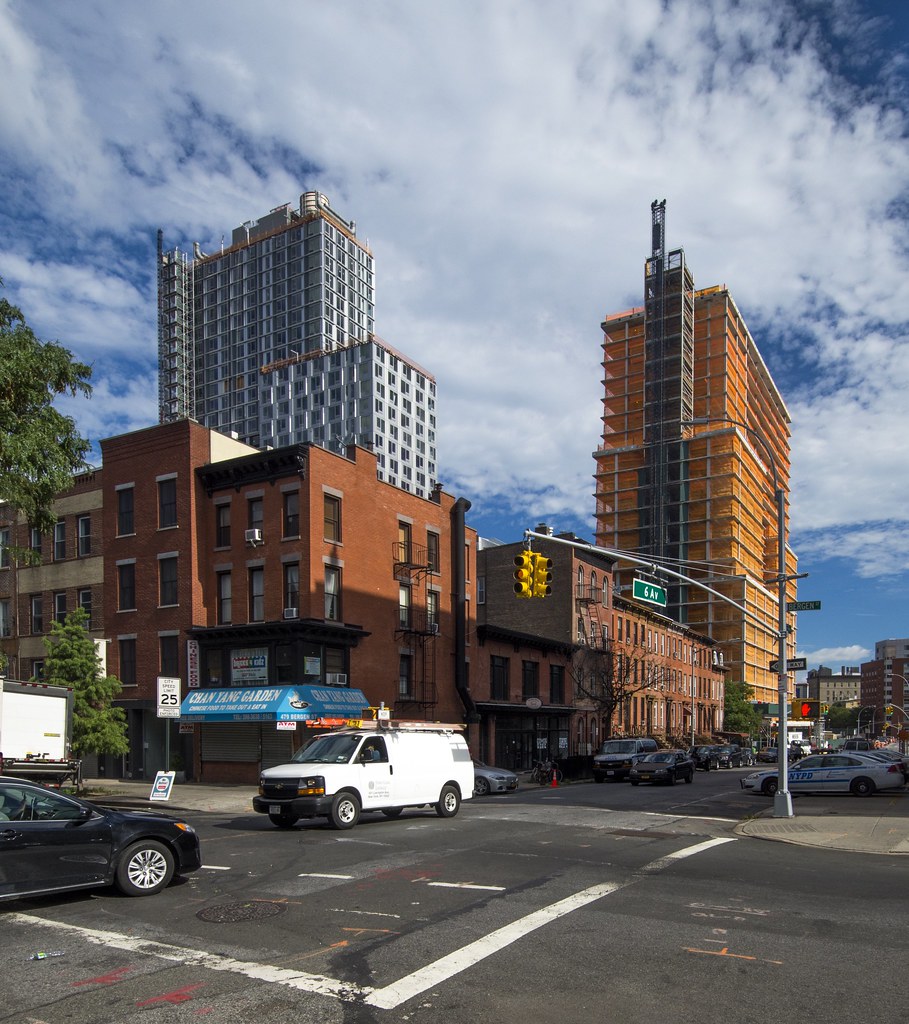 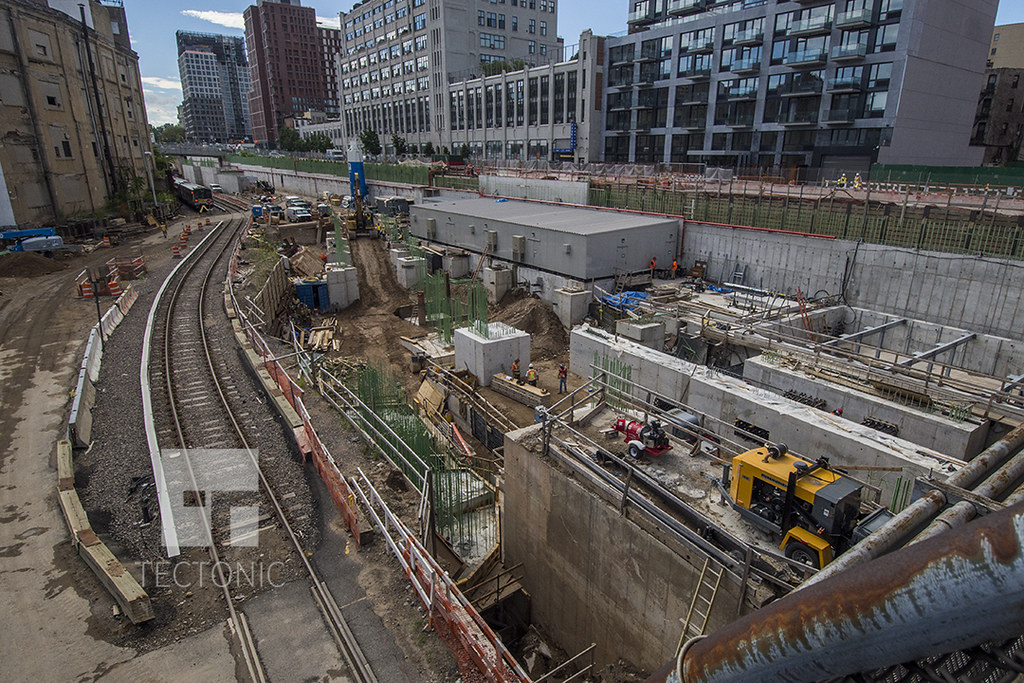 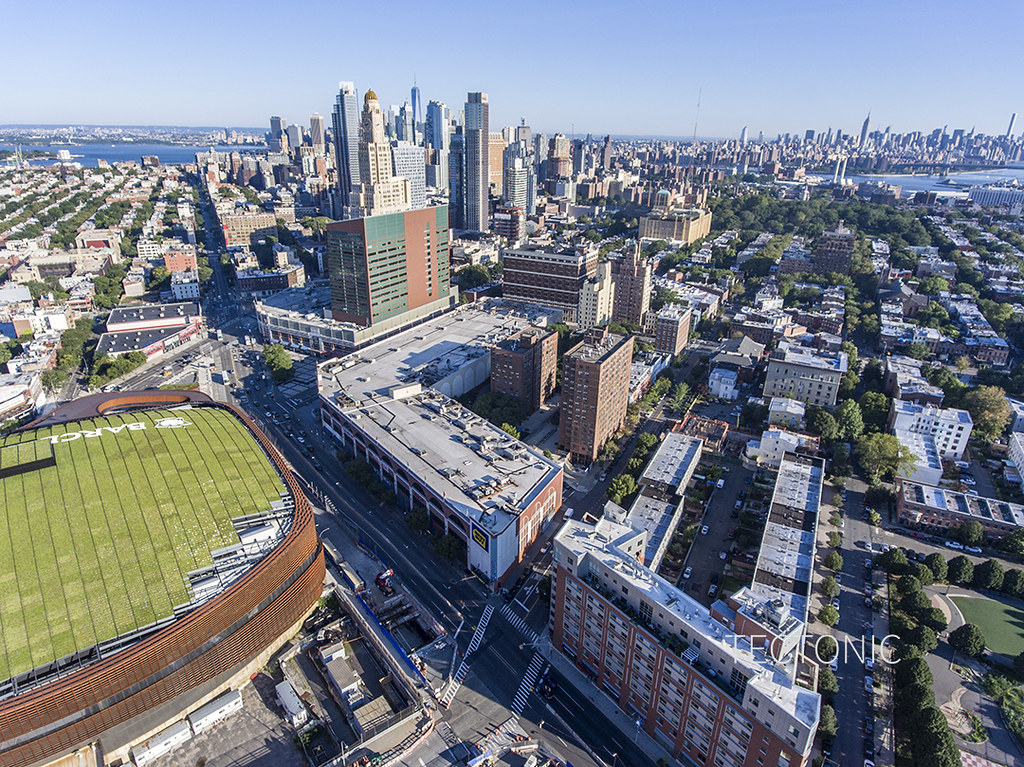 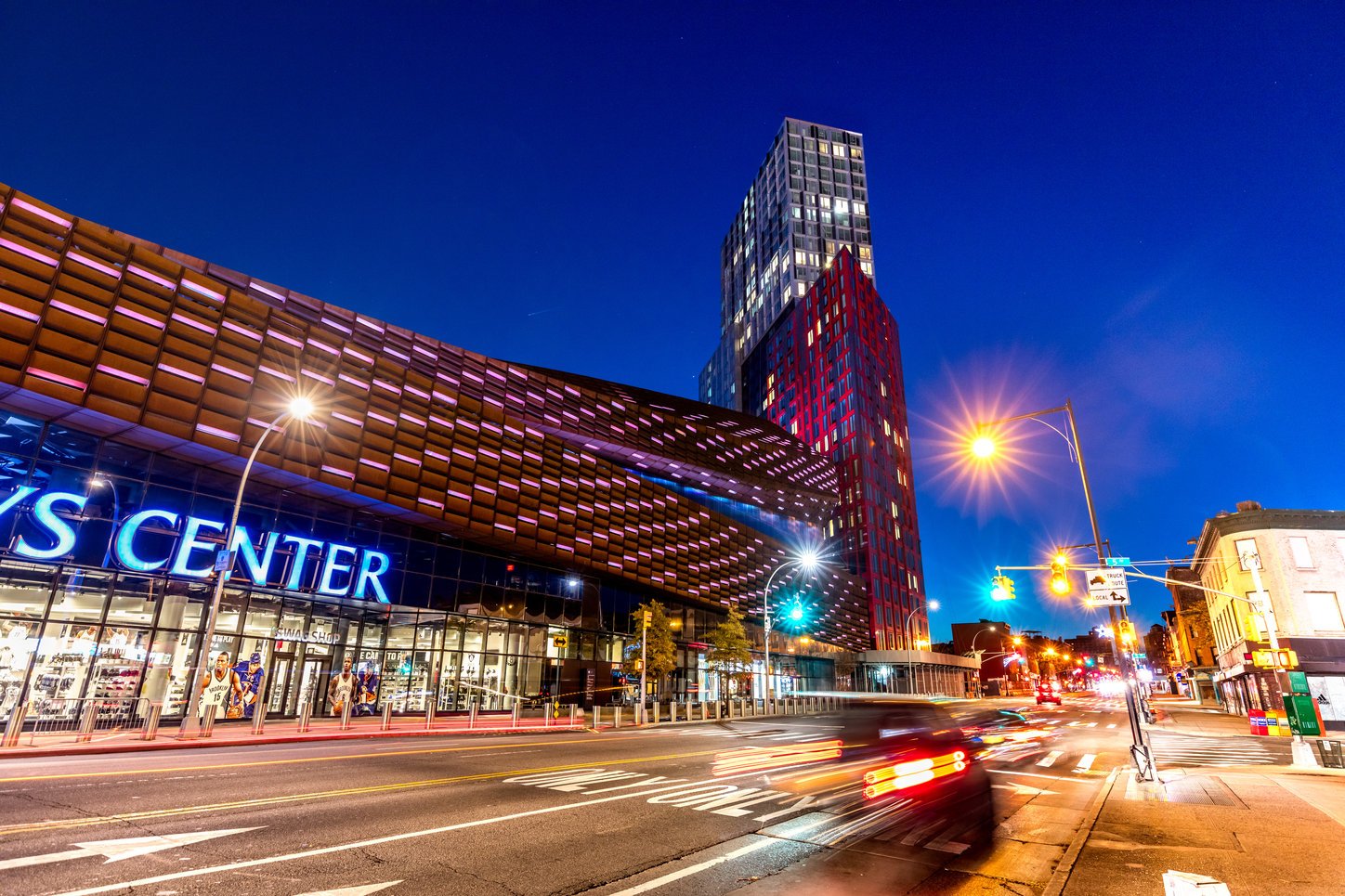 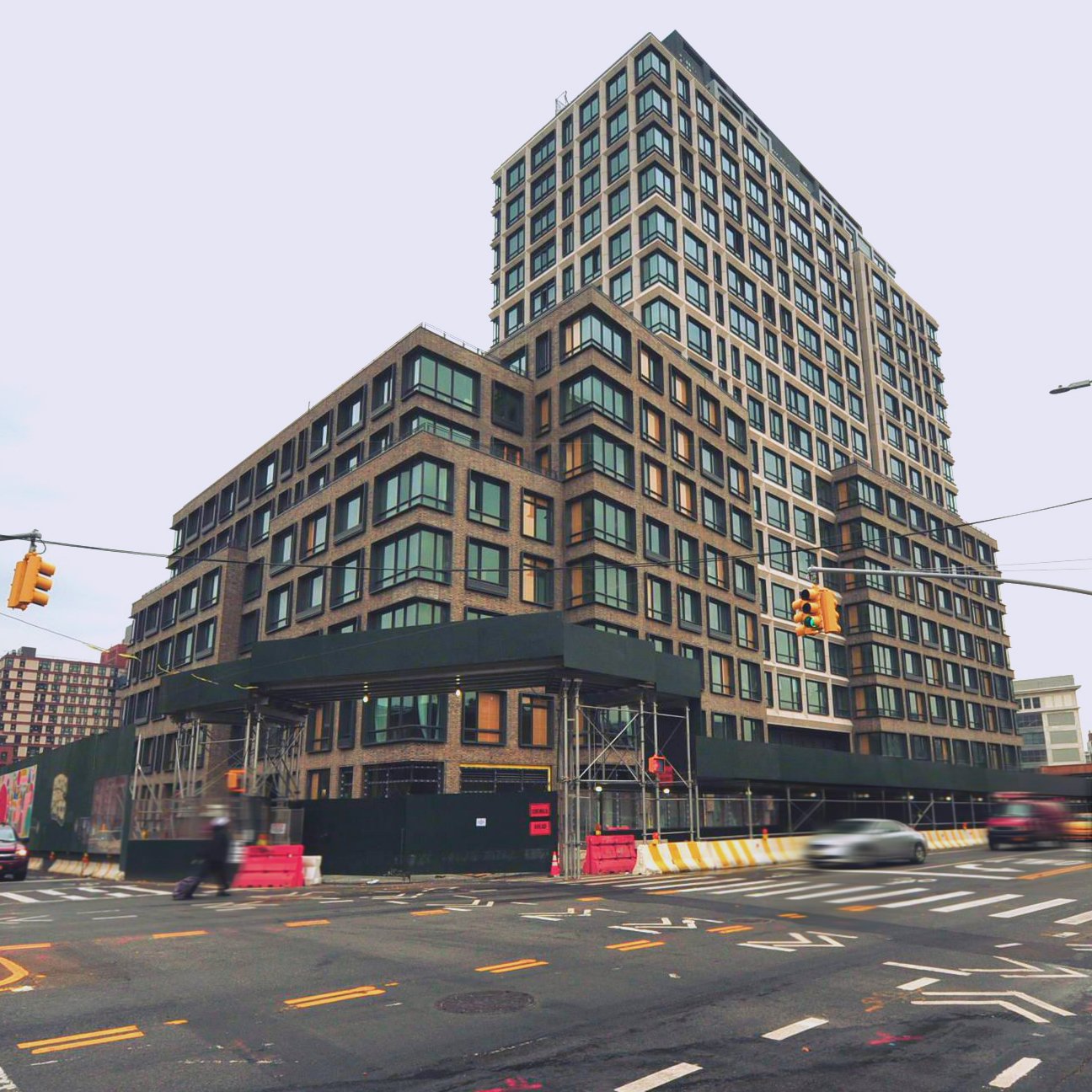 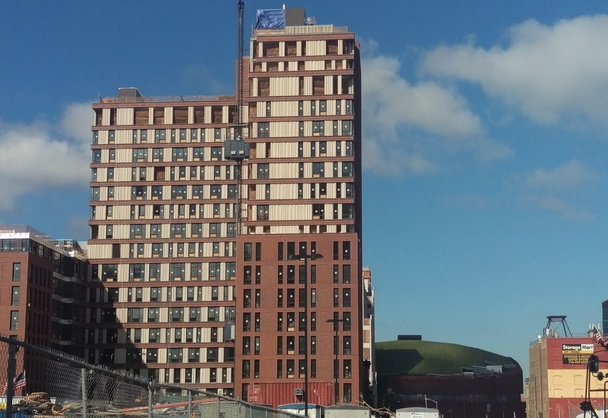 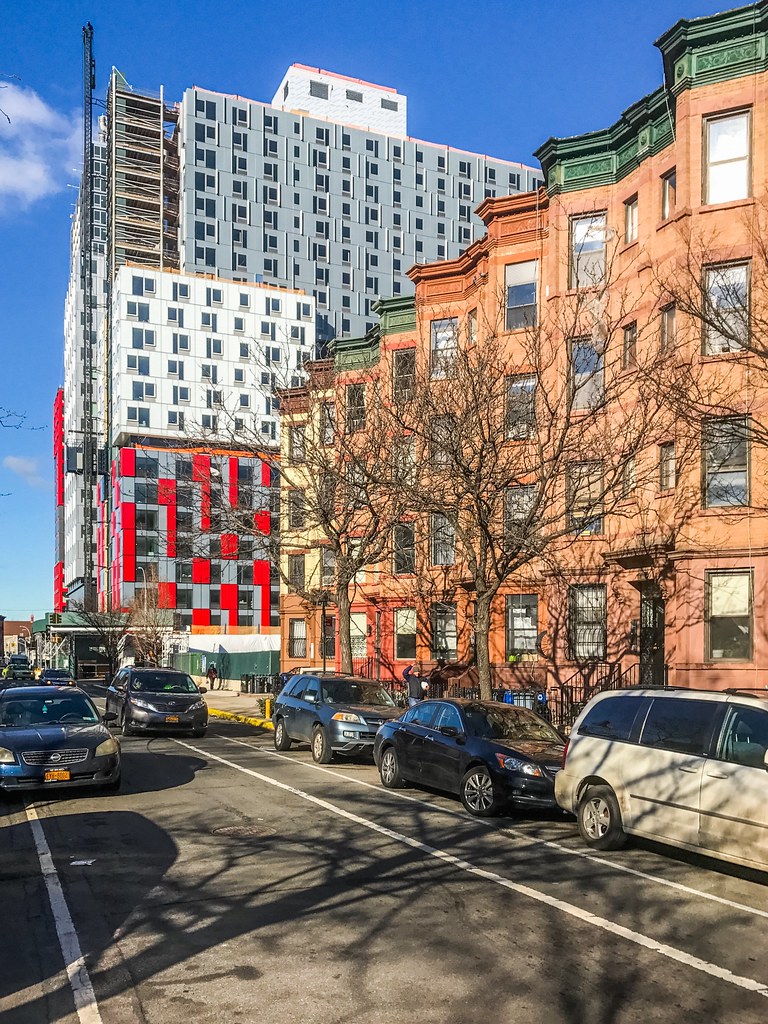 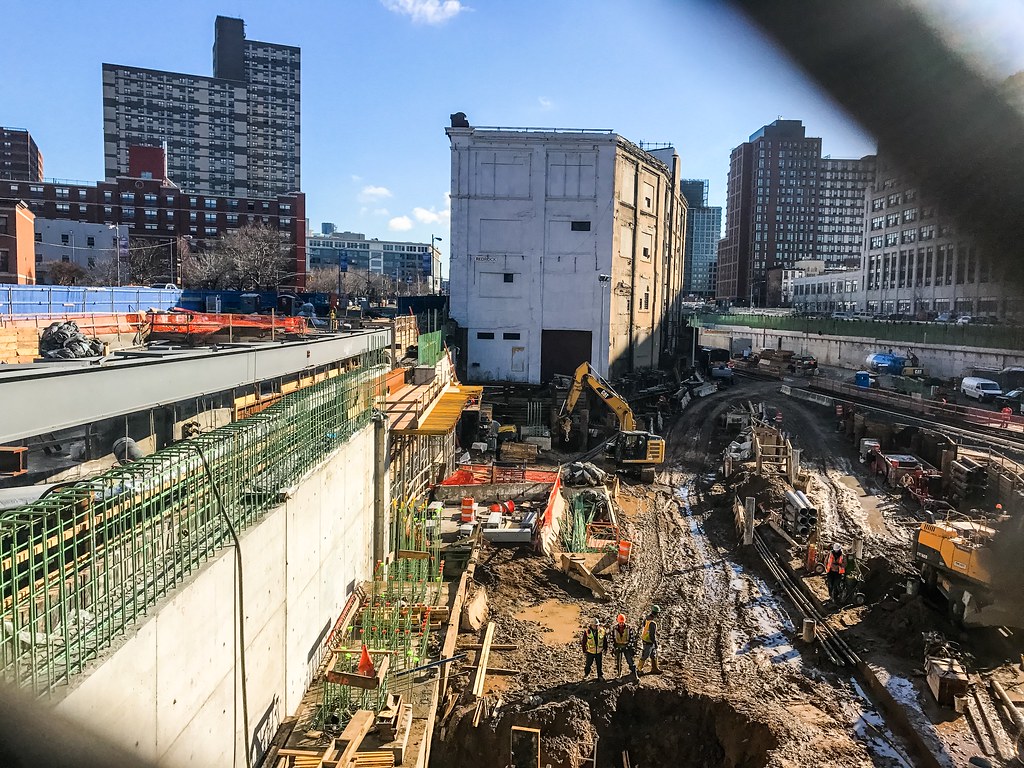 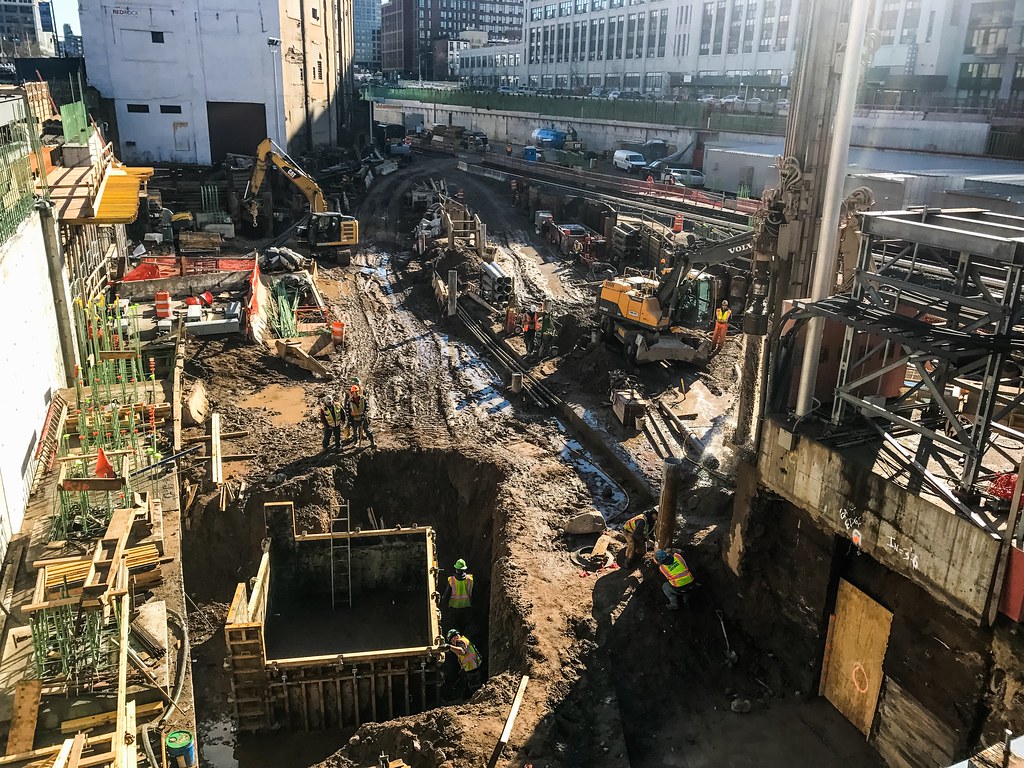 Great shots as always, Tectonic. I really appreciate what Pacific Park is doing for the BK skyline, but so far the architecture is lacking despite big names working on designs. 550 Vanderbilt is ok. B2 is looking much better since completion. But i’m a bit worried about the rest. 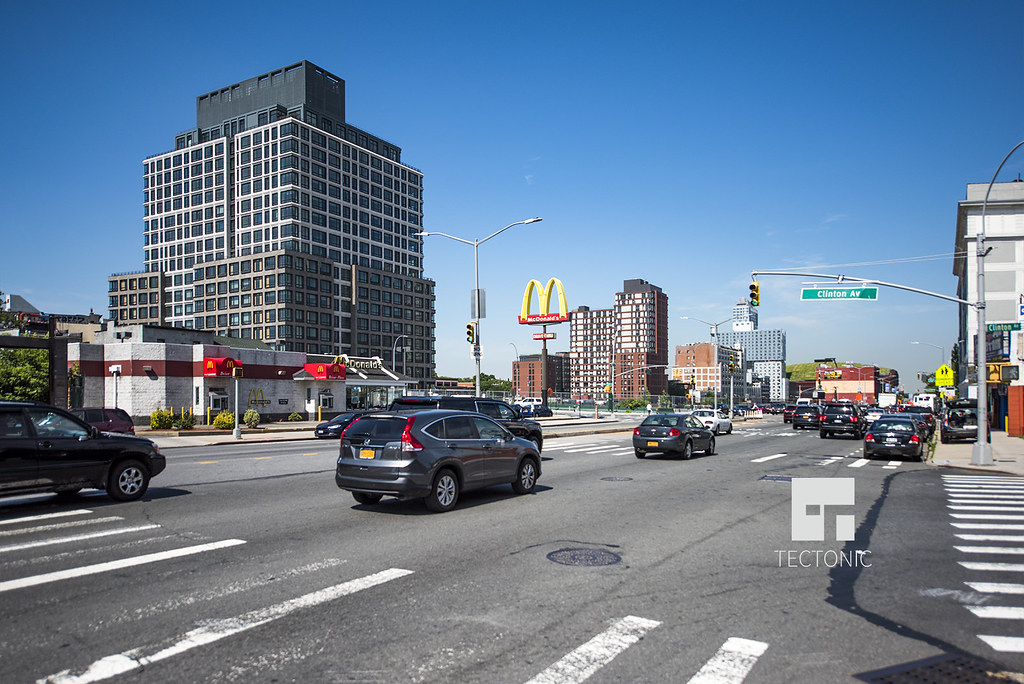 In yet another move to limit its exposure to the Pacific Park megaproject, Forest City New York is reducing its stake to 5 percent. The developer pla