After significant delays, reader-submitted photos show that construction appears to be picking up at the first Atlantic Yards residential tower, dubbed B2. The structure was designed by SHoP, and Forest City Ratner is developing.

The B2 Tower will total 32 floors and 363 units, becoming the first component of a much larger project that will completely transform the surrounding neighborhood. Barclays Center was a notable and significant first step in the revitalization of Atlantic Yards, and filling out the area with actual housing will further enhance an area that has long been dominated by open rail-yards.

While pre-fab housing has its challenges, Greenland Holding Company’s 70% stake in the project shows investors’ confidence in Forest City Ratner’s vision for the site, which will eventually have over fifteen buildings, possibly including office towers.

B2 is now at its seventh level, and the variegation of both form and facade is becoming evident; the tower will have several different colors, and bulk will be massed in several different components, stacked on top of one another. While progress has been fleeting, the structure finally appears to be rising at a slightly more regular rhythm.

Delays have been due to problems with on-site assembly, and per The New York Times, Forest City will be switching to traditional construction methods for three more towers set to rise later this year, which will add an additional 900 units to the site.

Completion of B2 is expected in 2015, and the entirety of Atlantic Yards should be built-out by the 2020s.

The 10th floor is currently being assembled, to-date.

I read somewhere they were having problems with the modular construction on B2 and going traditional for the rest of the towers.

Construction update photos. I took these on August 10th, 2014:

I do believe you are correct, with the possible exception of the next tower, which (I believe) SHoP is still designing.

What a mess this building turned into… 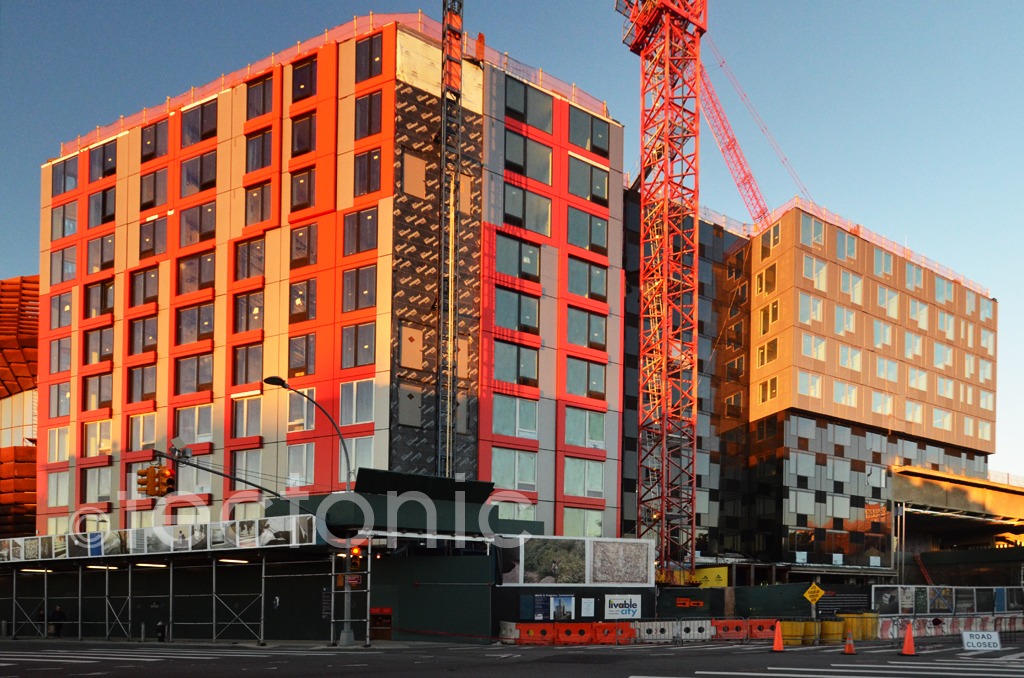 It hurts just to look at it. Looks like red tape all over it. Unfinished, like something that you would find in a freshman architecture studio.

From an NY DOT Camera:

From Across the street (West):

(One with cranes): Also note its incorporation with the surroundings. 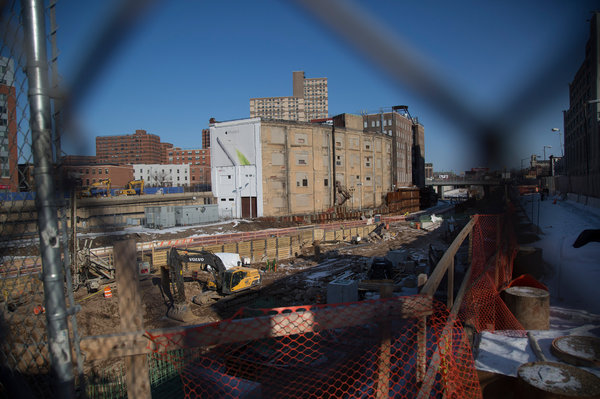 Last week was a busy one at the Barclays Center in Brooklyn. The rusticated arena lost its shot at hosting the 2016 Democratic National Convention, but there was still plenty to cheer during its first N.B.A. All-Star celebration.

It was a busy week next door, too. Just across Sixth Avenue, past the prefab apartments and satellite trucks, sits a squat gray warehouse that has stood since the 1930s and has been home to Atlantic Wool since 1997.

Inside, Aaron Piller, the second-generation president, was hurriedly sorting, stacking and selling off thousands of rolls of fabric, from $2-a-yard T-shirt cotton to $100-a-yard cashmeres.

“The more I sell, the less I have to move, not that I know where I’m going,” Mr. Piller said on Wednesday.

Five years ago, Atlantic Yards’s most vocal opponent and obstacle, Daniel Goldstein, agreed to walk away from his three-bedroom condominium for $3 million. His building then came down so that Bruce C. Ratner’s arena-and-apartments complex could rise.

It is Mr. Piller and several other property owners who are keeping the bulldozers from their half-dozen buildings on the 22-acre site. But they all must be gone within the next month or two, by order of State Supreme Court, to make way for the second phase of the development.

The holdouts thought they had years ahead of them, given the expected delays from lawsuits and the reverberations of the recession. But last year Mr. Ratner’s firm, Forest City Ratner, sold a majority stake to Greenland Holdings, a company based in Shanghai. Greenland is eager to see the project, rebranded Pacific Park, completed in less than a decade; condemnations began last June. Those left must now leave.

“We’re so lucky to have found a partner who is impatient, just like we are, and their message to us is let’s get this done,” Forest City Ratner’s vice president for external affairs, Ashley Cotton, said in an interview. “We know our neighbors, we’re sympathetic to whatever experience they’re having, but this is really another enormous milestone on the path of Pacific Park.”

Jerry Campbell, one of two homeowners left, must soon hand over the keys to a pair of rowhouses that his grandfather bought in the 1940s and 1960s after immigrating from Barbados.

Sitting on a couch inside the tin-ceilinged living room of 493 Dean Street, the larger home, Mr. Campbell said he would gladly leave — if only his terms were met.

“I honestly had a firm belief in the rule of law and the project, which, as described, seemed a genuinely good thing for the neighborhood,” Mr. Campbell said, his Barbadian accent coming through (his mother moved back to Barbados and he grew up there). “As long as I could replace what I had afterward, I had no reason to object.” 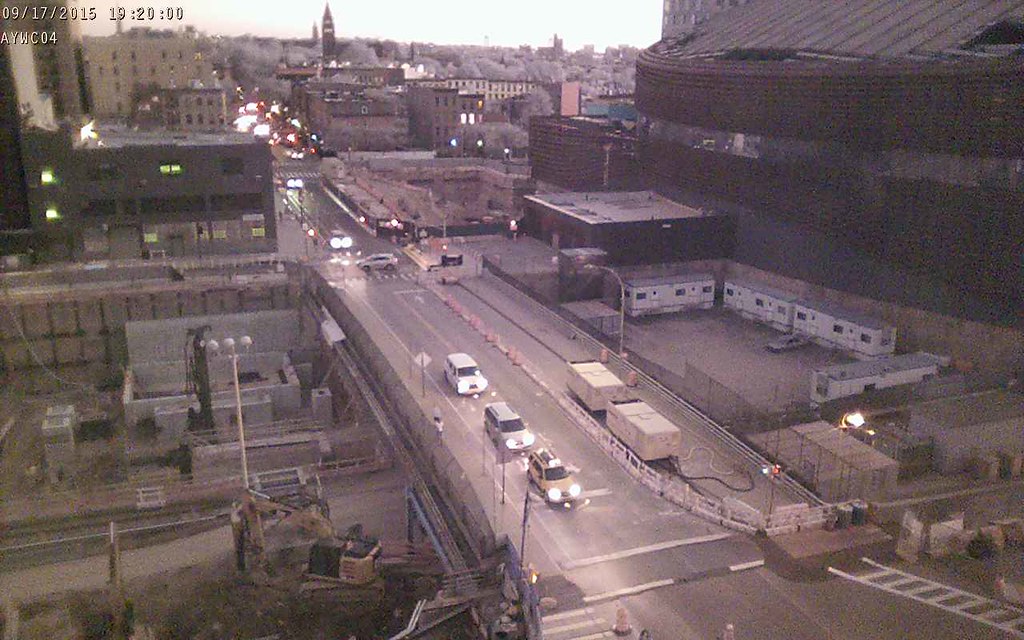 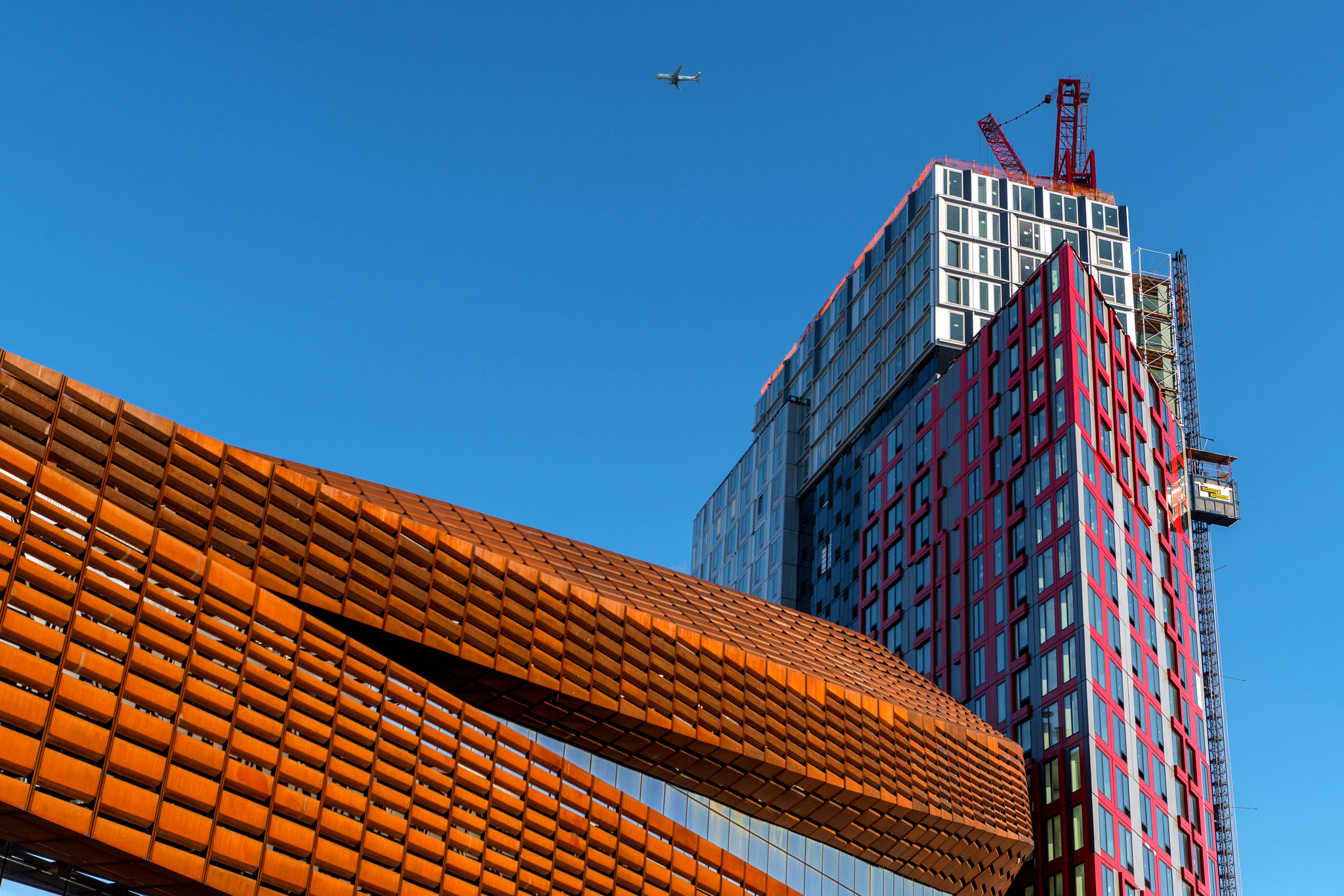 [QUOTE]Pacific Park’s modular building at 461 Dean will launch the affordable housing lottery on half of its 363 apartments tomorrow morning. The 32-story building features a total of 181 below-market rate units that are open to people making anywhere between 30 percent to 160 percent of the Area Median Income (AMI).

The affordable units will go live tomorrow morning on NYC Housing Connect, and the lottery will be open for a total of 60 days until June 27. This lottery marks the first lottery to commence at the Pacific Park megaproject, which includes a total of 2,250 affordable units.

Construction work on the building, which was developed by Forest City Ratner Companies, and designed by SHoP Architects, will likely wrap up soon. Leasing on the market-rate units will begin sometime in the summer, and residents will begin moving in in the fall. At present, 1,800 apartments are under construction at Pacific Park of a total 6,430 units.[/QUOTE]

here’s an aerial view of the mega development so far

that building is fugly. thank god it is only 330 feet tall.

Yes I agree. I am usually extremely pro development, but B2 is just a horrible looking design and I wish it would of been stalled or delayed to get a better design, Luckily, some of the Pacific Park towers on Vanderbilt are much nicer. Keep in mind that many of the Pacific Park (Atlantic Yards) towers are yet to be revealed. Hopefully the future towers will keep in like with the quality of those on Vanderbilt and Dean Avenue/street.

yes this and the Beekman downtown are the 2 worst going up. Luckily both might end up being surround by taller towers.

a bitter-sweet topping out. 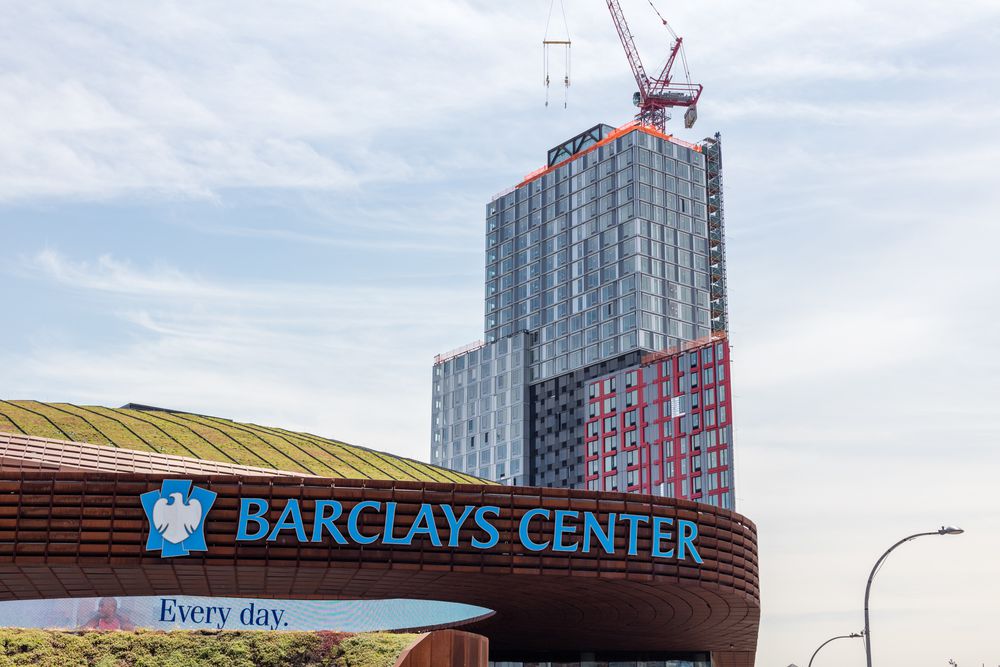 Construction is underway near Barclays Center on new skyscrapers that are part of the overall Pacific Park project.