To help finance the multi-billion-dollar project, hospital planners are looking at incorporating a new residential building – a strategy that has served as a lifeline for many cherished New York not-for-profit health, educational, religious and cultural institutions. 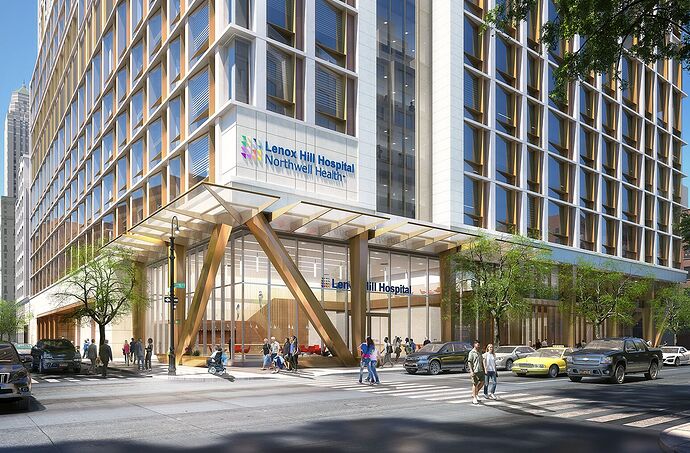 The planned renovation includes a 516 foot hospital room tower, new physician practice offices, and the potential demolition of three townhouses on the north side of 77th to create one new building.

Northwell Health will need to receive city and community approval for the project. City Council member Keith Powers, who represents the area, told the Journal that public consultation would be essential. 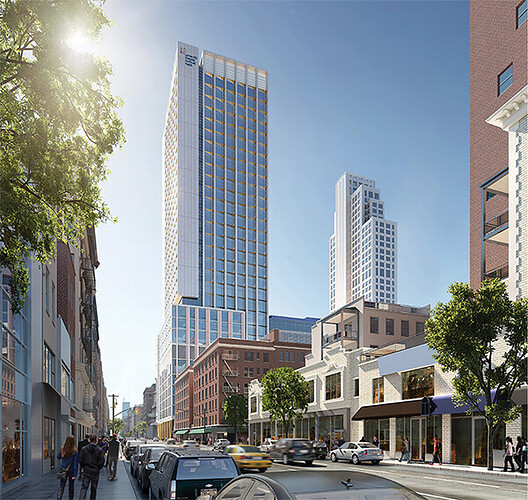 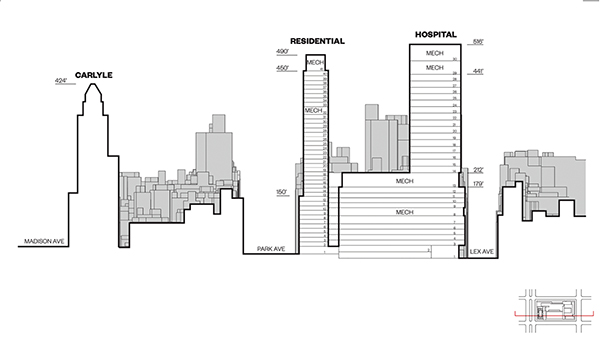 Plans call for larger service departments, only single-bed patient rooms, more beds than before, state-of-the-art equipment and technology while providing flexibility for future technology advancements, and more operating rooms. They will also establish a dedicated “mother-baby” hospital wing to accommodate mothers and family members in an elegant private setting with its own separate entrance on Park Avenue. Plans also include shared programmable community spaces. In total there will be 1.3 million square feet, up from 780,000 square feet including the 30-story tower.

This financial investment would be difficult to achieve without “monetizing” a portion of the hospital’s valuable real estate. Therefore, a 41-story residential building on the Park Avenue corner, with about 200 units, was added so “we could offset costs for rebuilding Lenox Hill,” said Dowling. The costs and returns from the condos have not yet been established; it is totally separate from the hospital buildings. 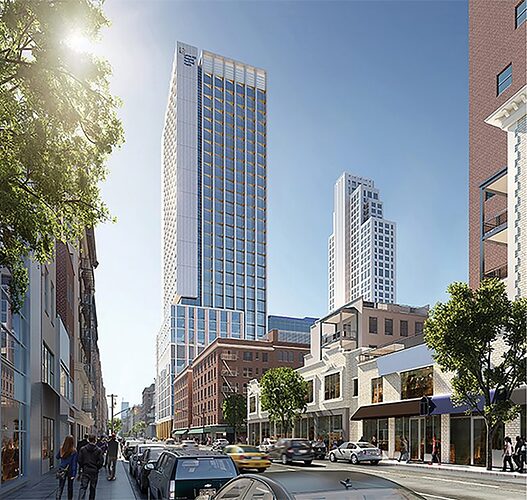 Plans for a Lenox Hill Hospital expansion have been in the works for sometime now, and new renderings show a 41-story residential building on part of the hospital’s Upper East Side property. This 490-foot-tall condominium tower will sit on the corner of East 76th Street and Park Avenue and include about 200 units, while a second 30-story tower will be built on the opposite Park Avenue corner at East 77th Street. This structure will include a “mother-baby” hospital wing as well as operating rooms, patient rooms, and programable shared community spaces. The proposal calls for a total of 1.3 million square feet, up from the hospital’s current 780,000 square feet at 100 East 77th Street.

As reported in Westview News, the financial weight of overhauling Lenox Hill made the project nearly impossible to accomplish without “monetizing” part of the hospital’s real estate. The residential tower was added so “we could offset costs for rebuilding Lenox Hill,” said Michael Dowling, president and chief executive officer of Northwell Health.

The project has been broken up into three phases to allow for the continued operation of hospital facilities while the new development is constructed. It is unclear when construction will begin or when the expansion is expected to be completed. 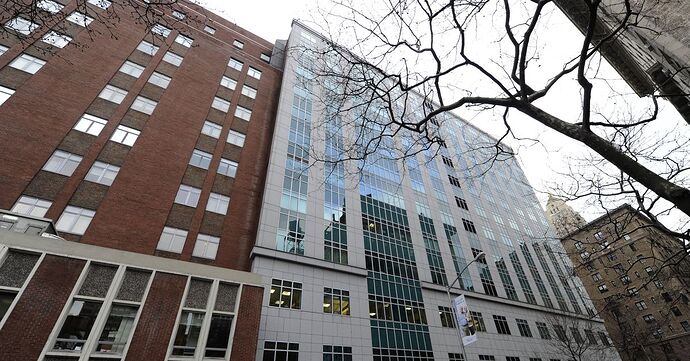 The local community board passed a resolution against preliminary plans.

Critics argue that the expansion prioritizes the hospital as a “medical tourism destination” over providing affordable health care, and call the towers out of character with the area.

“We certainly don’t need this monstrous development that is so out of scale with our neighborhood,” Andy Soussloff, who lives across the street from the current campus and is a member of the Committee to Protect Our Lenox Hill Neighborhood, which formed in opposition to the expansion, said at a Wednesday community board meeting.

Councilmember Keith Powers and Borough President Brewer have asked Northwell to explore an expansion on the hospital’s campus in compliance with what’s currently allowed on the site, and question why rewriting the block’s zoning is crucial to their plan.

“Before this proposal moves forward, Northwell must provide clear details of why it is necessary that the height, scale and density of the two proposed buildings are needed to achieve the overall mission of the project,” Powers and Brewer wrote in a joint October 23 letter to Strugatz.

The pair of pols also call on Northwell to include another nearby parcel—an entire block on Third Avenue between 76th and 77th streets—the hospital provider acquired with plans to develop into the planning process for the hospital’s main campus. Not to do so would be a “missed opportunity” for “comprehensive planning,” Power and Brewer argue in their letter.

I can respect that. I’m sure this was already considered and they can provide answers. 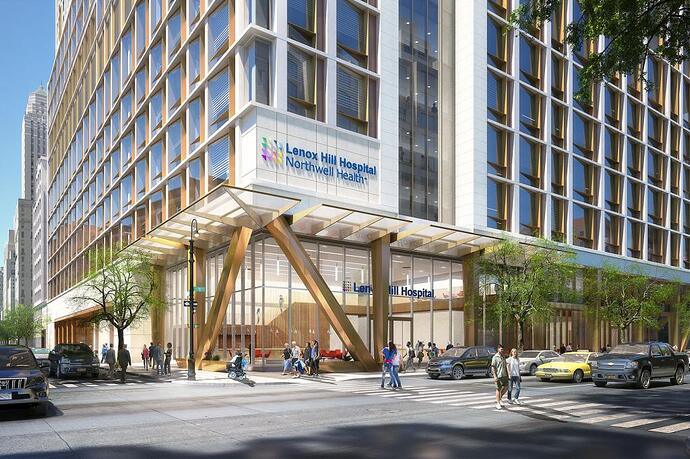 That stretch of Lex is Nothing special. It’s absurd that the neighbors would complain about something replacing eyesores.

This is hardly Mayfair, Belgravia, or South Ken. 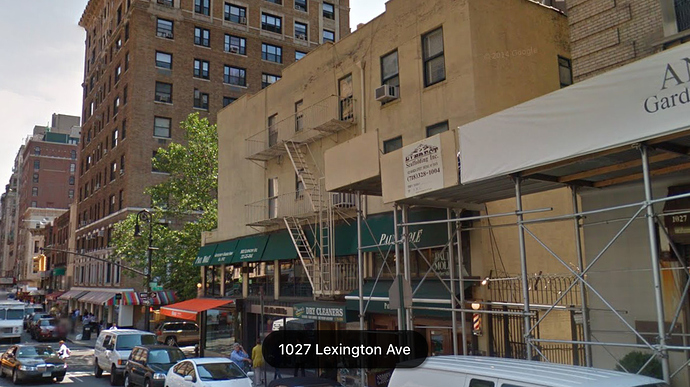 different building but also part of lenox hill program. apparently this annex building is going ahead.

Any more news on the Third ave site 76 to 77th street,? How many stories building are they building at this site?

Thank you. we are looking to move into a building directly across from the site on 3rd ave which is about the same floor as the projected height of this new building. The concern is how the height of the new building will impact the views and sun light. As well as the increase in noise and traffic during the construction.

i dont think light is an issue. you wont get it any earlier or later with this building there.

there will be noise, but mostly during foundation work. if memory serves, rock is high in that part of town.

getting the building up, most noise will be trucks, but that wont start until 7 in the morning and will be done by 5pm.

JRF, thank you so much, Do you think the new building site will be at similar height as the building across the street, in particular 176 E77, We are considering a unit in that building that are on the higher floors so the other concern if the new building will tower over this building.