Earlier this week, the City Council voted to green light the ever-contentious Greenpoint Landing project, whose centerpiece is 10 controversially-rendered tall towers that’ll house some 5,000 units. Despite significant community opposition, the project is going ahead, and developers have made concessions to area residents that include construction of a K-8 school, money for a park, shuttle buses to bolster public transit, and a promise to keep 400+ apartments “permanently affordable.”

Greenpointers has an in-depth look at the ays, nays, and rocky road to approval, and it includes a map of the area that gives the clearest picture yet of what could go where. (Click for big; find an even bigger PDF here.) The buildings lettered A through H are towers, and it shows where proposed parkland, affordable housing, and the school could go. Because context is good. 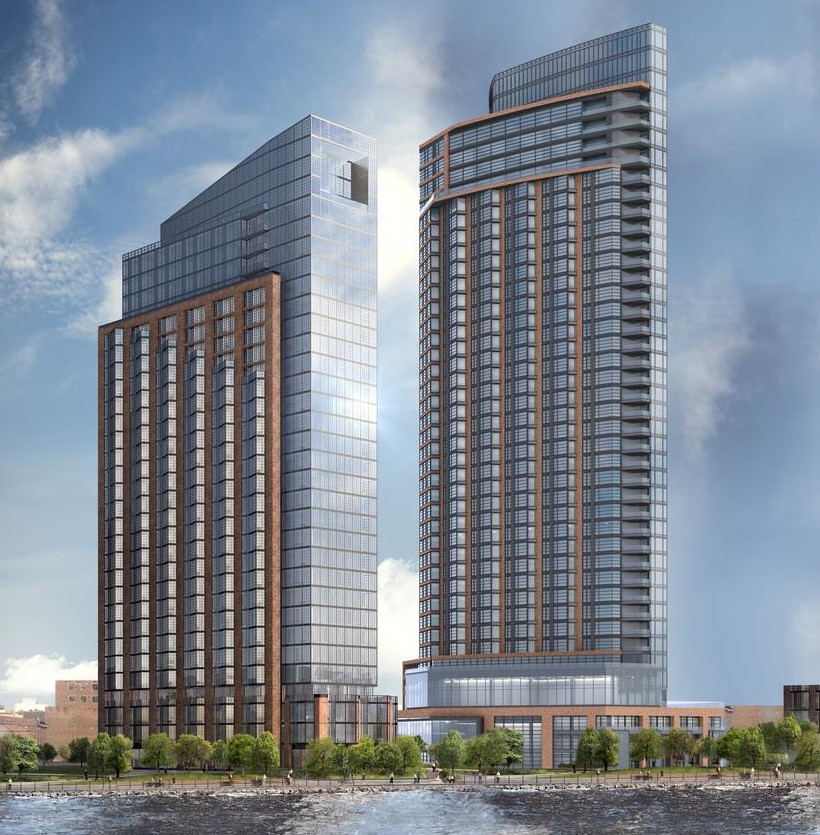 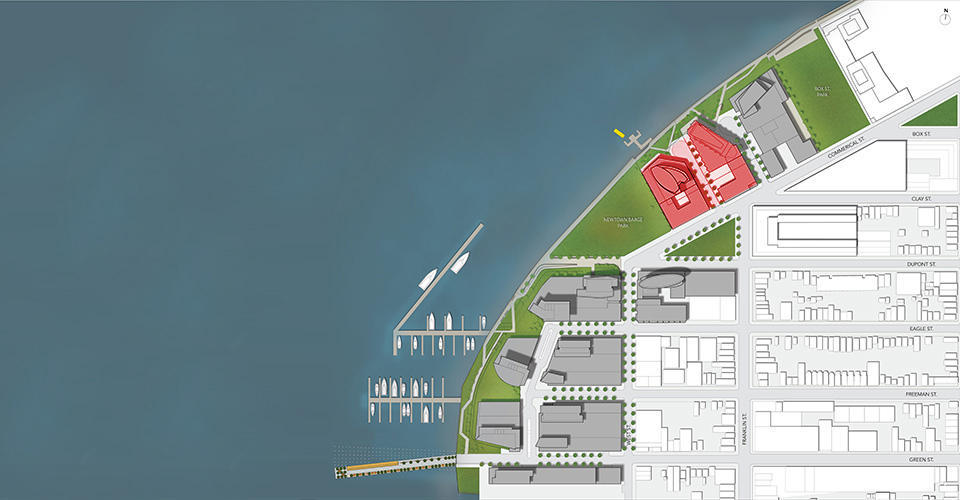 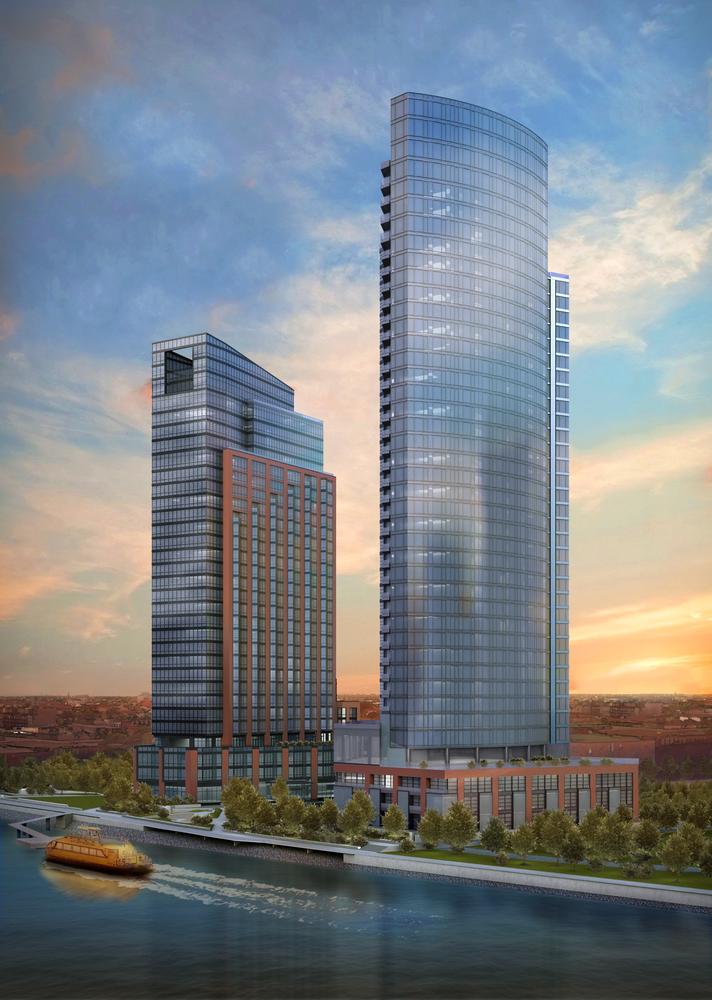 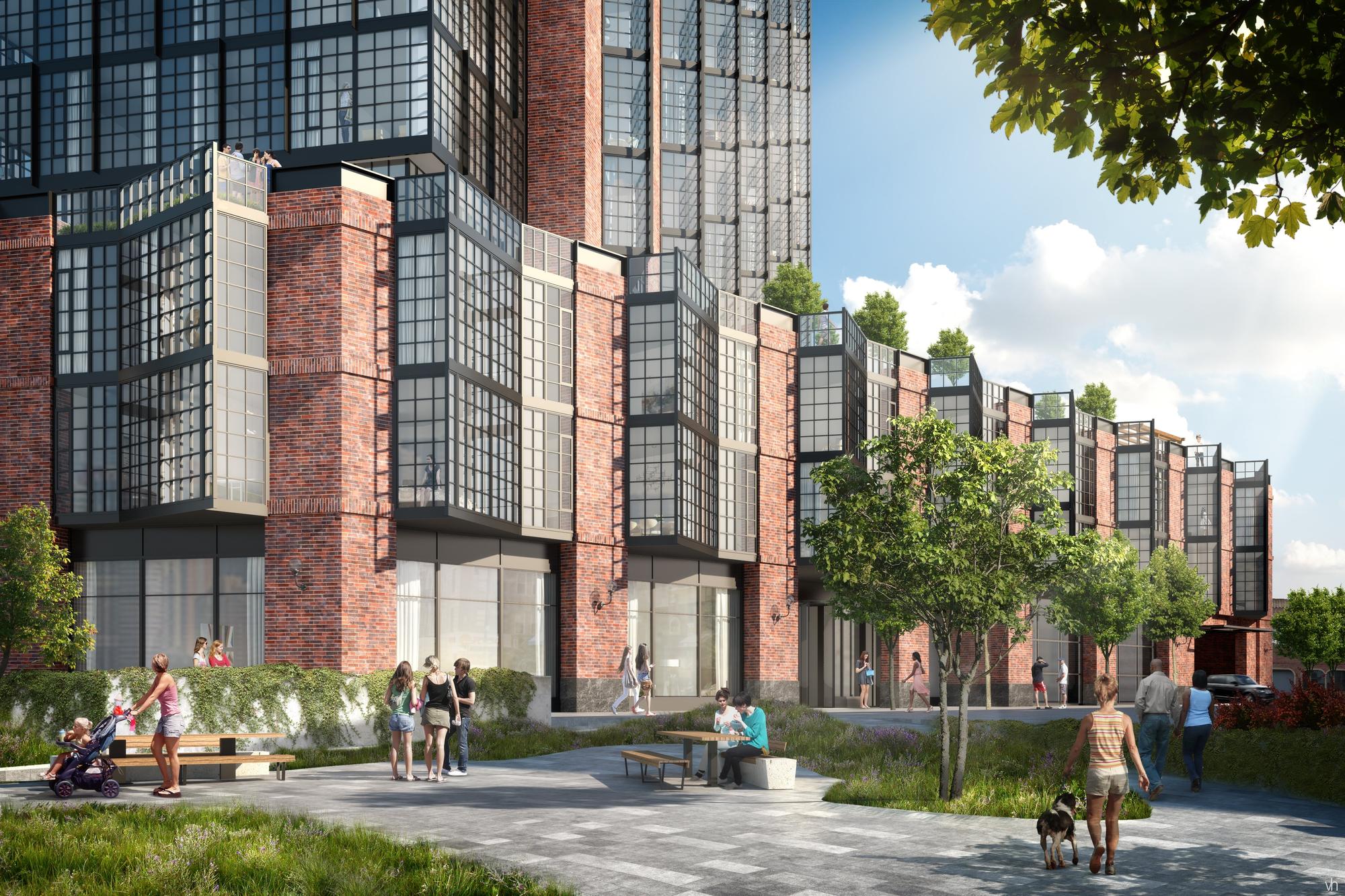 Yesterday it was announced that Brookfield Property Partners is making their first Brooklyn venture by purchasing a majority stake in two Greenpoint Landing development sites for $59.7 million. While better known for their commercial ventures, Brookfield will begin construction early next year on 775 market-rate apartments on two waterfront parcels. The towers should be finished sometime in 2019 at the total cost of $600 million as part of the first phases of the of the 22-acre master plan which is being designed by Handel Architects.

Plans filed with the Department of Buildings for Brookfield’s sites call for a 30-story, 372-unit rental building at 37 Blue Slip and a larger 39-story, 401-unit tower at 41 Blue Slip. A cul-de-sac will separate the slab-shaped towers, which will open onto a waterfront esplanade designed by James Corner Field Operations.

This is the left of the two red buildings Some photos from this morning:

The tower under construction near the Greenpoint ferryboat pier

Here is the view from this morning from Pulaski Bridge

The view this morning from West and Freeman streets

up close from West Street

The view from WNYC Transmitter Park and its pier

Whoa, very nice collection of nice pictures, Waymond!
And the progress seems to be going well too!

Crazy how this completely flew under the radar.
Great to see projects moving forward in queens.

To be clear, this is in the Greenpoint district of Brooklyn, but very close to the Hunters Point sub-district of Long Island City, Queens.

Great updates WW.
Here is a pic from last week from the lic waterfront.

Nice shots! As always…!
Which building is this, do you have an address or rendering?

I believe it’s site G on plan in the first post above, 37 Blue Slip https://www.6sqft.com/two-new-handel-designed-towers-to-sail-onto-the-greenpoint-landing-waterfront/
The shorter of the two, 30 Floors. Not 100% sure.
https://www.cityrealty.com/nyc/greenpoint/37-blue-slip/71337

Next to 7 Bell Slip Significant progress is being made at Greenpoint Landing, the waterfront mega project from developers Park Tower Group, Brookfield Property Partners, and L+M Development Partners. Handel Architects is responsible for the design of the master plan and...

Is that a blue chromed out BMW X6 M?

Yup. Nice car, but the color is ridiculous!