A 10-acre parking lot in East New York is poised to be transformed into a mixed-use “urban village” with 2,100 permanently affordable apartments, a performing arts center, and other community-minded amenities.

The plan and its “urban village” descriptor come courtesy of developer Gotham Organization with the Christian Cultural Center, home to the city’s largest Evangelical congregation and the owner of the parking lot that neighbors the center’s Brooklyn campus. Practice for Architecture and Urbanism is behind the site’s master plan.

In addition to the nine residential buildings that will hold the 2,100 affordable apartments, the performing arts center, and the church, the campus at the corner of Flatlands and Pennsylvania avenues will also have a school, a grocery store, and two acres of public open space.

Although specifics have yet to be determined, the plan also seeks to include services like 24-hour child care facilities, vocational training services, walk-in medical services, community-minded retail, a senior center, and recreational athletic space. The campus plan also includes a shuttle service that will connect residents to the L and 3 trains several blocks away.

“When we traditionally think about infrastructure, it’s transportation and utilities,” said Vishaan Chakrabarti, founder of PAU. “Today, we know that for a community to succeed it needs access to a broader infrastructure of opportunity—open space, education, health care, child care, social opportunities and culture.”

The development has a ways to go before it can come a reality—namely it must pass through the city’s Uniform Land Use Review Procedure (ULURP) which includes soliciting feedback from East New York’s community board and winning the approval of the City Council—but project leaders have already started incorporating input from area Council member Inez Barron, the New York Times says.

In accordance with concerns raised by Barron, the developers have modified most building heights within the campus to between 13 and 15 stories, making them shorter than the neighboring towers of Starrett City.

Barron has also expressed concerns over the affordability threshold of the development. The specific breakdown of affordability of the housing units has yet to be determined but apartments will be available to those making 30 to 130 percent of area median income, or $28,170 to $122,070 for a family of three. The median household income in East New York is $34,512, meaning more than one-third of area families might not be able to afford apartments in the development. so this doesn’t have a single building with exposed a/c vents yet in Manhattan and ESPECIALLY in Amazonia it is the norm, 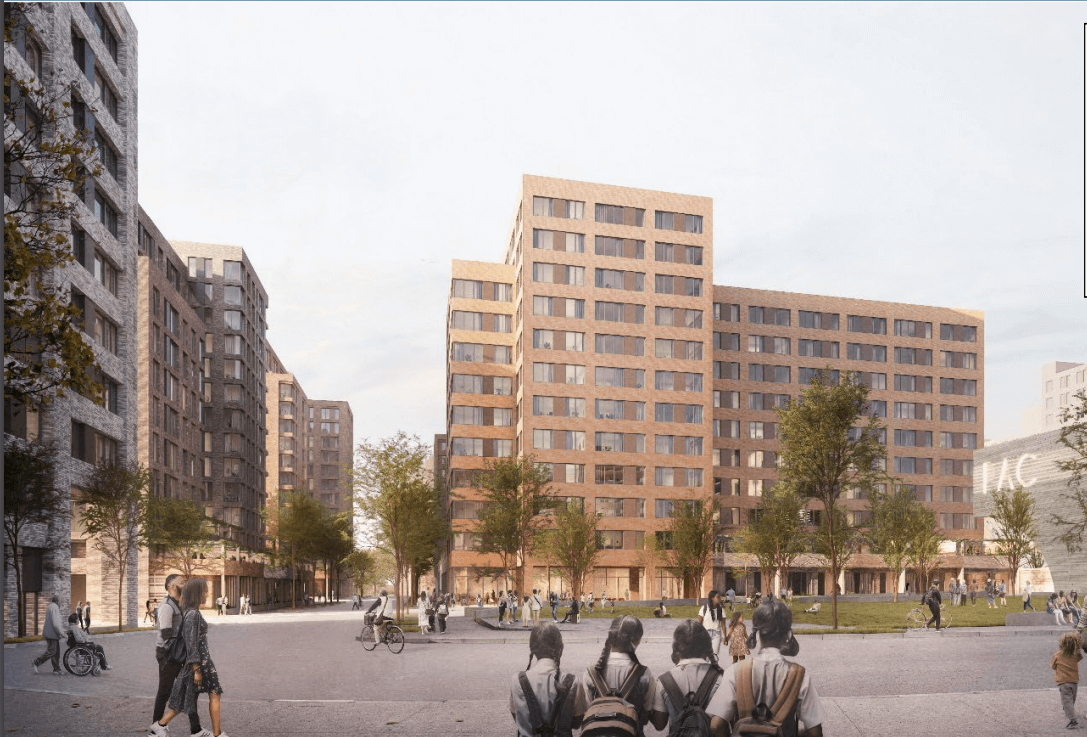 A Brooklyn megachurch pastor's longtime vision of an "urban village" in East New York is approaching reality, with the Christian Cultural Center's Innovative

So basically a redux of midcentury urban housing projects?

I think this qualifies as urban infill. The city needs more affordable housing and this is a good location for that. If you look at the amenities being included in this development (grocery store, PAC) it should be beneficial to the overall neighborhood. 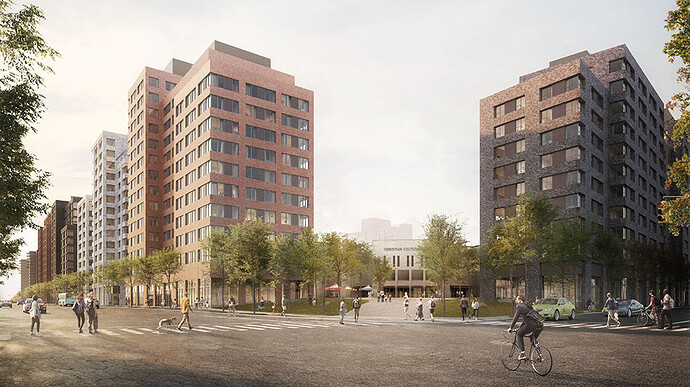 Looking at the renderings, yeah, this is basically a 2023 remix of mid-century choices. 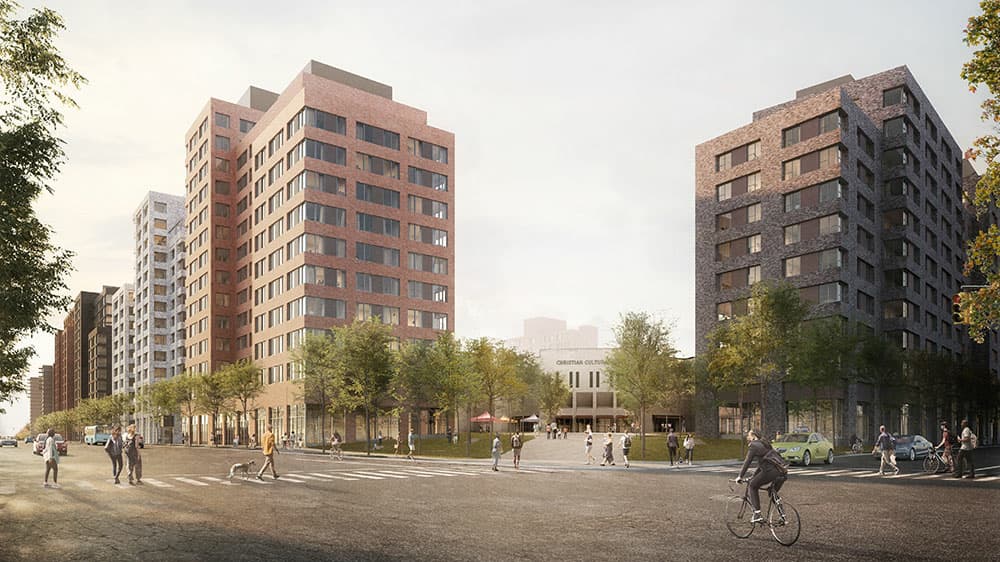 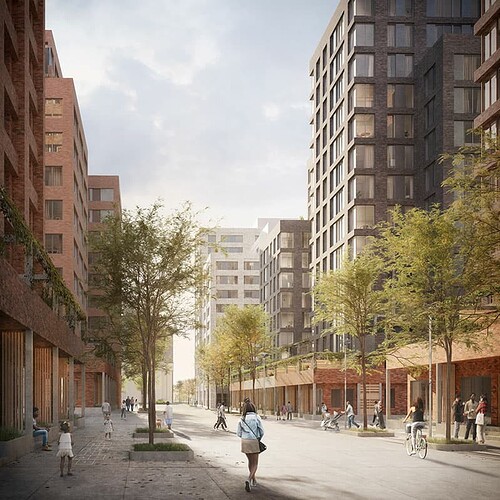 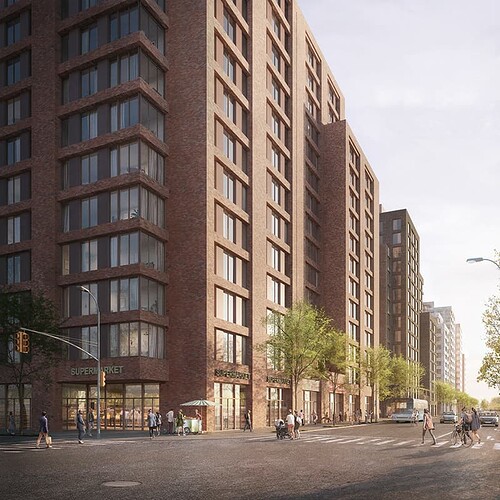 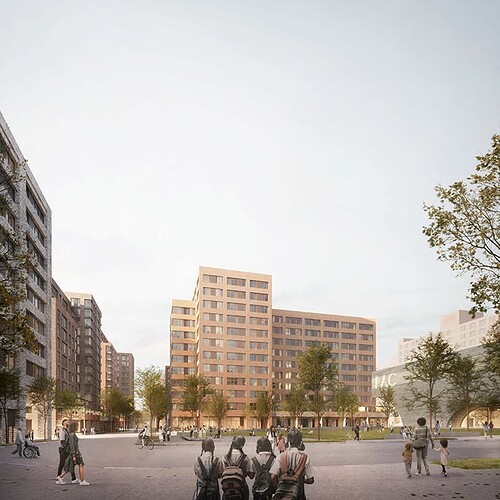 Who is supposed to pay for this?