The first renderings for 959 First Avenue have been posted on-site, giving a detailed look at Toll Brothers City Living’s latest project to begin construction in Manhattan; Incorporated NY is the design architect, while Goldstein Hill & West is the architectural firm of record, per filings with the Department of Buildings.

Permits indicate the mixed-use structure will have 197,127 square feet in total, and 9,569 square feet will be dedicated to ground floor retail. The remainder of the project will be divided between 114 residences, and the 30-story building’s pinnacle will stand 333 feet above the street.

959 First Avenue’s design will benefit the neighborhood, which has long existed in architectural limbo on the periphery of Midtown. With much of the existing pre-war stock run-down, the area’s modernization and continued development is a definite boon, and the plans for Toll Brothers’ building will both respect the site’s surrounds and add to its urban dynamic.

While Goldstein Hill & West tend towards the modern end of design, the firm’s scheme for 959 First Avenue definitely has historicist elements, with casement windows featuring prominently; the concept almost looks like a residential take on the McGraw Hill Building in Midtown West, minus the green facade. 959 First Avenue’s aesthetics will add to the neighborhood, and the project will also enhance the street-wall along First Avenue, providing new retail space that will enliven the pedestrian sphere.

Per on-site signage, completion of 959 First Avenue is expected in the fall of 2016. 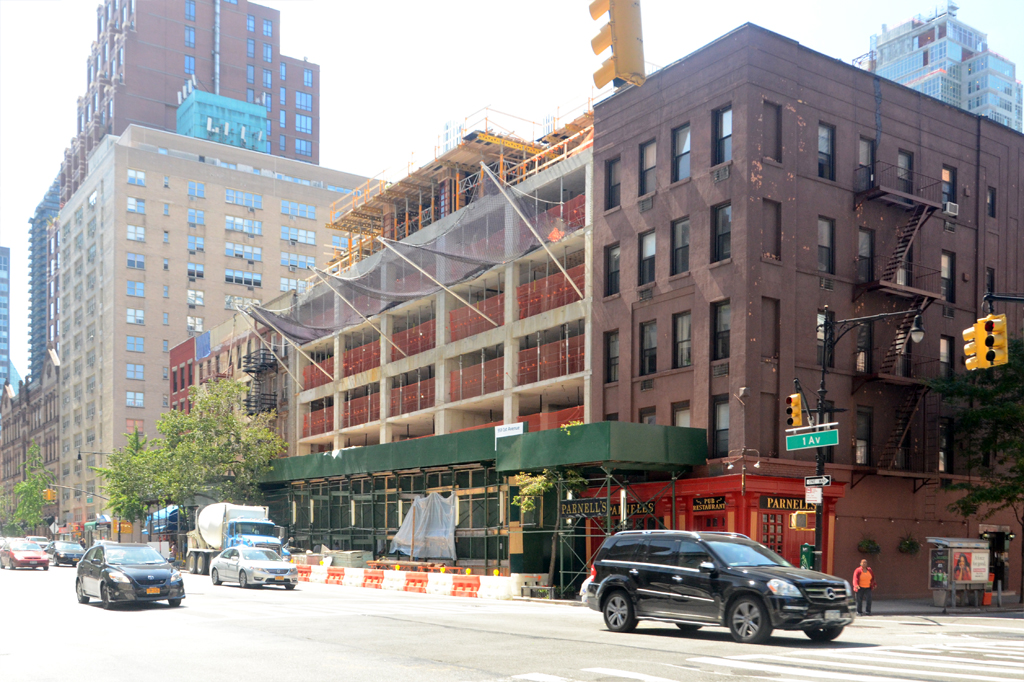 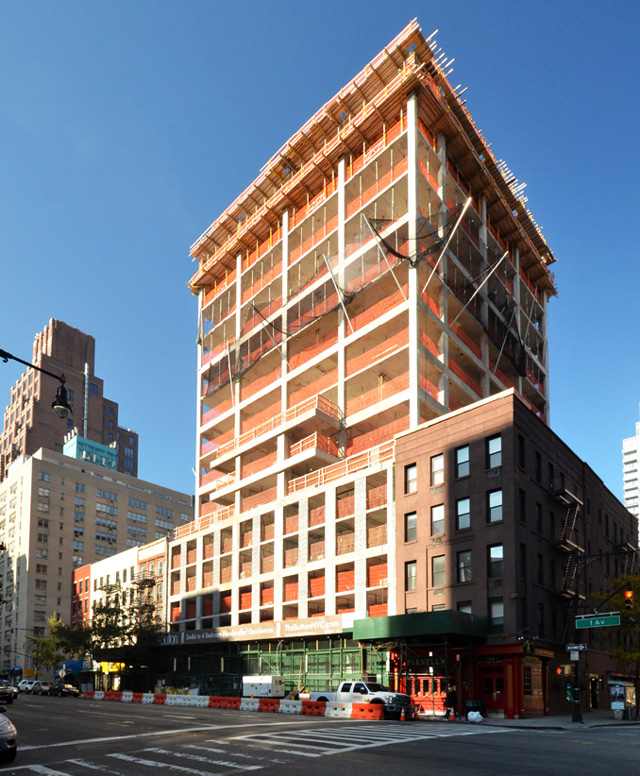 959 First Avenue, aka The Sutton, photo by Tectonic

When we last checked in on The Sutton, at 959 First Avenue, the structure’s foundations had just been poured, and a rendering had recently been plastered to the project’s fencing. Now, six months later, the building has risen well above ground, and is at the approximate halfway point in terms of its total height.

Located between 52nd and 53rd Streets, 959 First Avenue will eventually stand 30 stories and 333 feet tall, which is about average for new developments in the neighborhood. The project is to the east of the most significant action, and two blocks to the west, buildings are also under construction at 301 East 50th Street and 305 East 51st Street. 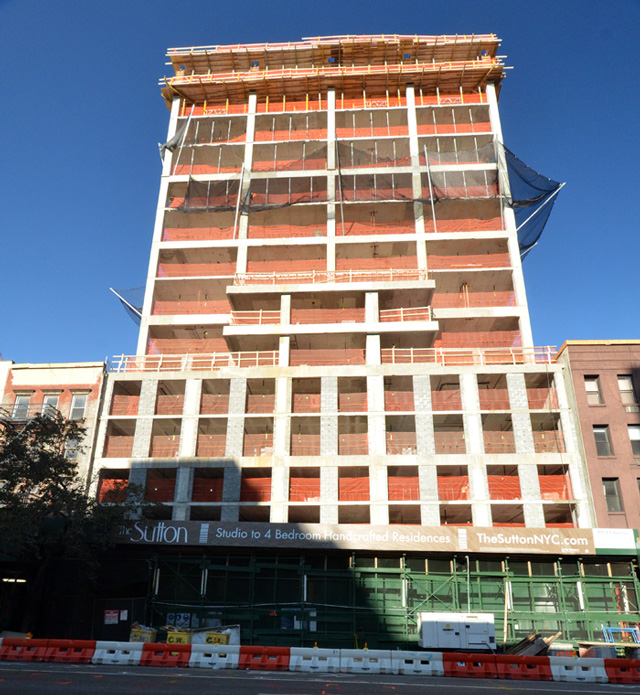 Adjacent pre-war structures are met by the envelope of the new tower’s base, and the bulk of the building recedes from the street after the first few floors. Still, the development maintains First Avenue’s relatively low-slung street-wall, and the eventual brick exterior should also prove appealing; Incorporated NY is the design architect, while Goldstein Hill & West are the architects of record. 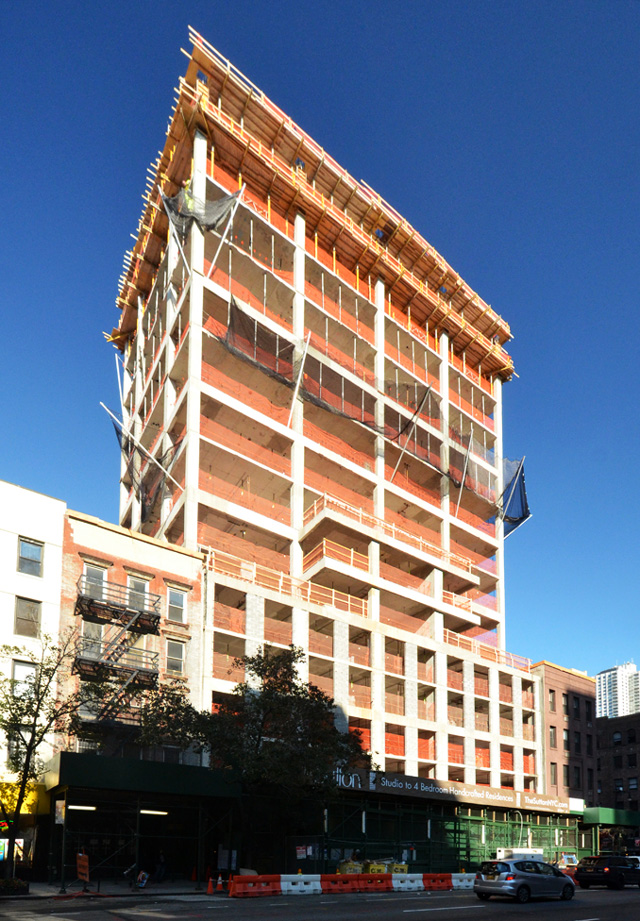 The Sutton is being developed by Toll Brothers, and a new rendering of the building has been posted on its project page, though sales are awaiting a formal launch. 959 First Avenue will have a total of 114 condominiums, and completion is expected next year. 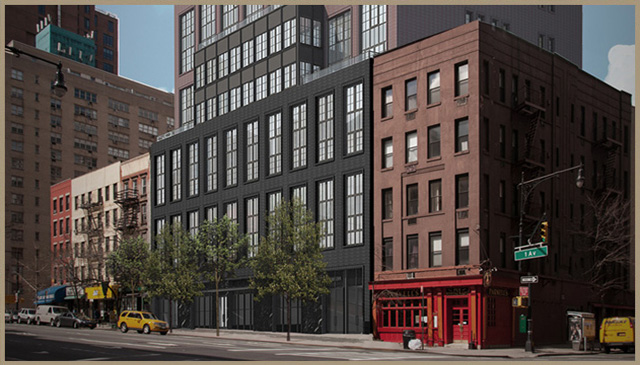 New intel on Toll Brothers’ The Sutton at 959 First Avenue

Located at 959 First Avenue off East 53rd Street, the building will offer studio to four-bedroom condominiums. Sales are scheduled to start in early 2015. The 113 “modern vintage” residences will be priced from approximately $850,000 to more than $6 million, according to the official site.

The condo offering plan was accepted in December 2014, with a current total price of $271.6 million.

Curbed gives a little history on the site: Back in 2010, the Alexico Group proposed a 161-unit luxury rental project, with plans for the first rooftop movie screening facility in the city. The developer ran into money troubles, the parcel went into foreclosure and Toll Brothers picked up the land for $64 million in 2013.

Permits were filed November 2013 for a new 30-story building with 187,558 square feet of residential space and 9,569 square feet of retail. The architect of record is Goldstein, Hill & West. Amenities will include a courtyard, lounge, bike storage and children’s playroom, according to the Schedule A filing.

The building was about halfway to its final 333-foot height in late October, according to NY YIMBY.

The development is scheduled for completion in 2016.

This 30-story, mid-block apartment building at 959 First Avenue between 52nd and 53rd Streets was scheduled for completion in 2016 by Toll Brothers City Living.

It is known as The Sutton and was designed by Goldstein, Hill & West.
It has 90 condominium apartments.Something of “a stranger in paradise,” this large apartment tower tries to minimize and mask its size with assorted light red façade subdivisions on top of a very strong and dark base that is mirrored somewhat at its top: you’d almost think it was packin’ heat and looking for a fight, but it’s actually a post-post-modern habitat that is pretty good at twirling its visual weapons. 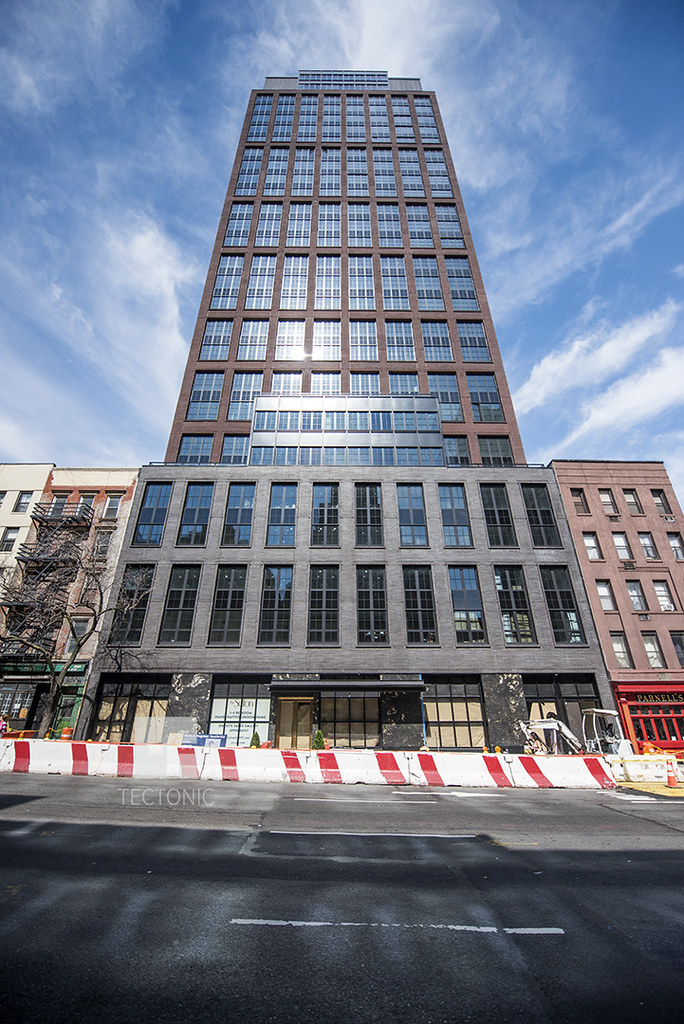 Gorgeous building but the rent-controlled, filthy tenements next door detract from it.