Full renderings may be lacking, but construction at 855 Sixth Avenue has begun in earnest, where the Durst Organization is erecting a 41-story mixed-use tower (with the help of some foreign EB-5 investors looking for a slice of the American dream), as YIMBY previously reported.

The tower will be predominately residential, with 375 luxury apartments (20 percent of which will be rented at below-market rates), but will also include a sizable office component and 57,000 square feet of retail space.

Because the large development site bleeds into the industrial M1-6 zone between Sixth and Seventh Avenues, the developer cannot build the entire site to its highest and best use – luxury residential – and will therefore be including a substantial 127,000 square feet of office space on the second through sixth floors (to put that in perspective, that’s not that much smaller than the Jeanne Gang-designed all-office “Solar Carve” tower going up on the High Line).

While the office space won’t be as profitable as luxury apartments – and office space hasn’t been more profitable than residential space anywhere in the five boroughs for longer than we’ve been around – Durst will likely have no problem finding tenants. Unlike the towers going up at the World Trade Center and on the Far West Side, 855 Sixth sits squarely within the Midtown South subdistrict, where tech and creative companies are eager to lease space.

The tower should add some heft to an area that’s been crying out for height to accompany the once-lonely Empire State Building. And the partial renderings that have been released show a clean façade designed by Cook + Fox (SLCE is the architect of record), mercifully bereft of the PTAC heating and cooling units that normally pockmark rental buildings in New York City, but which are unheard of in office towers.

Per on-site signage, completion of 855 Sixth Avenue is expected in April of 2016.

This building is kind of lame.

YIMBY has the first full reveal for Durst’s 855 Sixth Avenue, where Cook + Fox is the design architect; on-site renderings have been up for quite some time, but until now, the actual tower’s appearance was hidden. A Durst company brochure has additional information, and all the specifics.

Construction is already making quick headway, and the first few floors of the tower are now up; the project had been on-hold for several years, and sat through the recession as an empty pit before rising above ground this July. 855 Avenue of the Americas will eventually stand 41 stories and 479 feet tall.

Office will take up floors two through six, totaling 171,000 square feet, with a stated capacity of 990 individuals. A 20,000 square-foot terrace will rest above the fifth level, and besides outdoor space, the fourth floor will feature a partial double-height ceiling, and a “town hall” area. Two floors of retail will wrap along Sixth Avenue, and given the building’s location — in terms of pedestrian traffic, one of the most visible in the city — tenant(s) should not be hard to find.

Cook + Fox’s design for the tower is unsurprising given the previous glimpse, and the building will be an exercise in glassy simplicity. The site exemplifies the kind of development deserving of more air rights: while projects next to the 7-line extension have allowed FARs of up to 30, permits indicate a total FAR of just below 15 for 855 Sixth Avenue, despite access to nearly every subway line.

The entirety of 855 Sixth Avenue will span 570,000 square feet, with the remaining space to be divided amongst 375 rental apartments, which will have an entrance separate from the office and retail components. Completion is expected in April of 2016, though the office portion is set to open at the end of 2015.*

It’s pretty lame. I hope there’s a setback at the top. There appears to be.

I walk by a few times each week. The tower is quite thin.

What the present situation of this tower now? Can you tell me or show me photo if possible? Thank you very much. 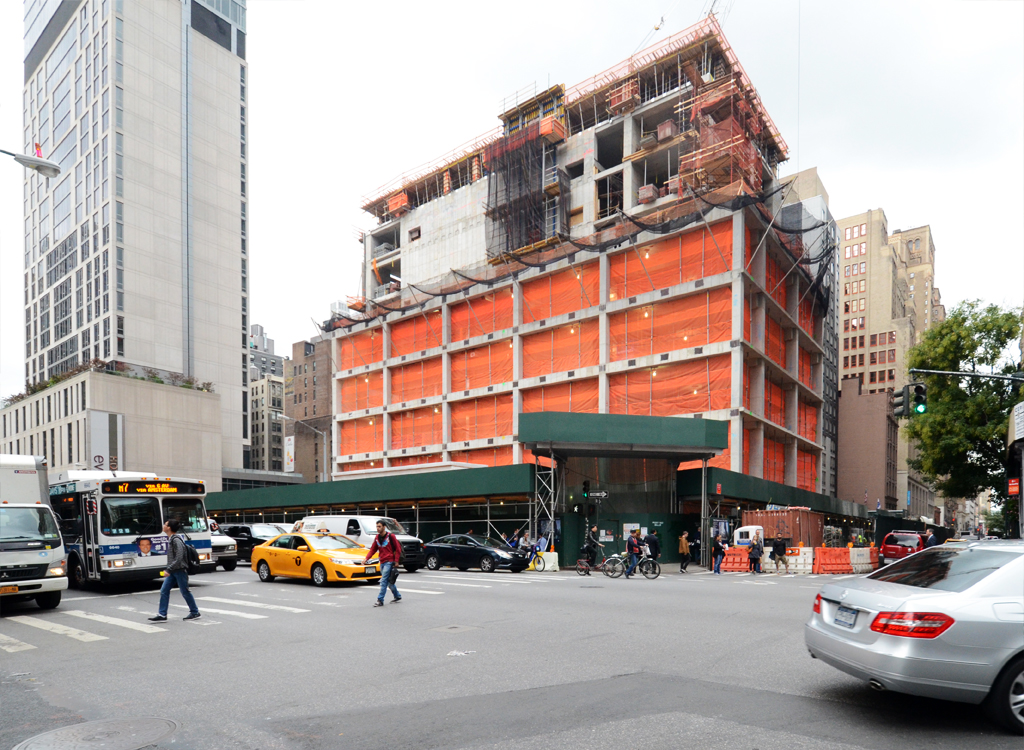 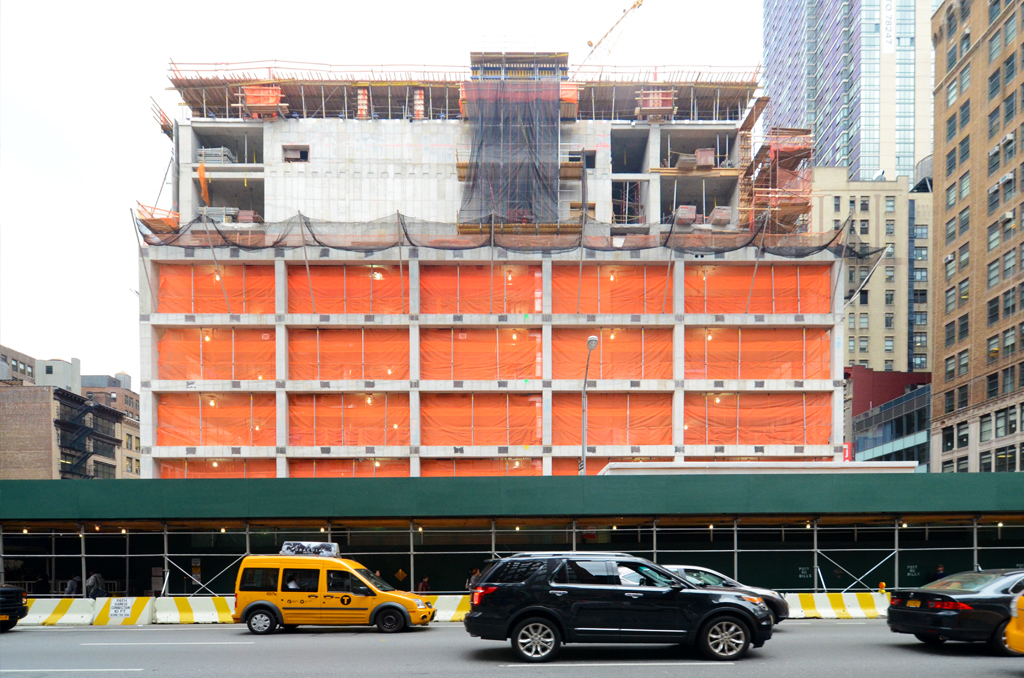 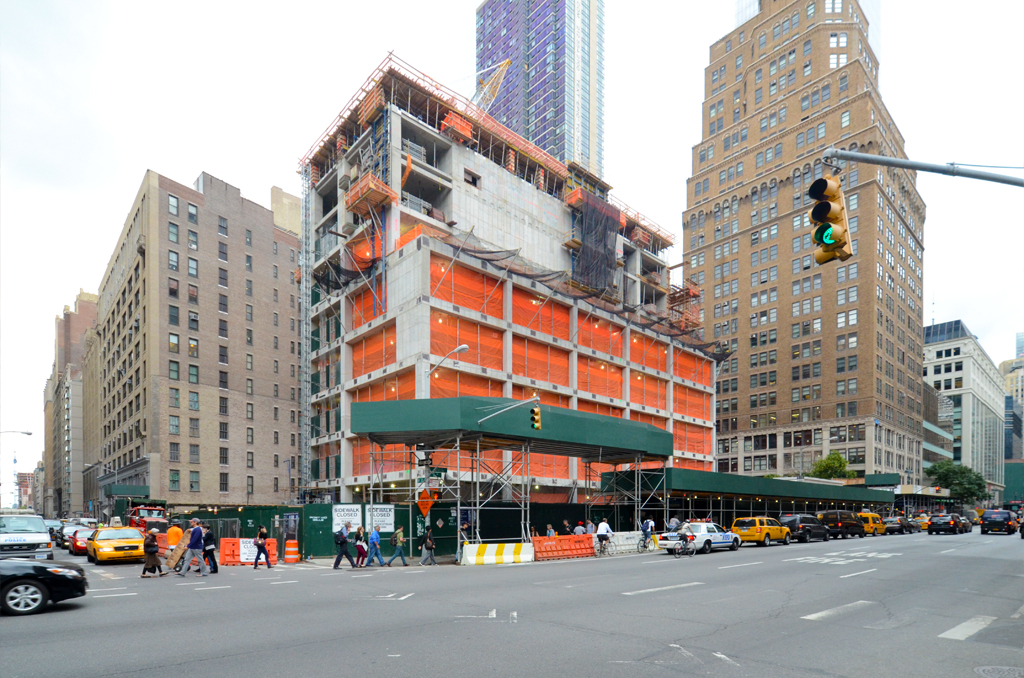 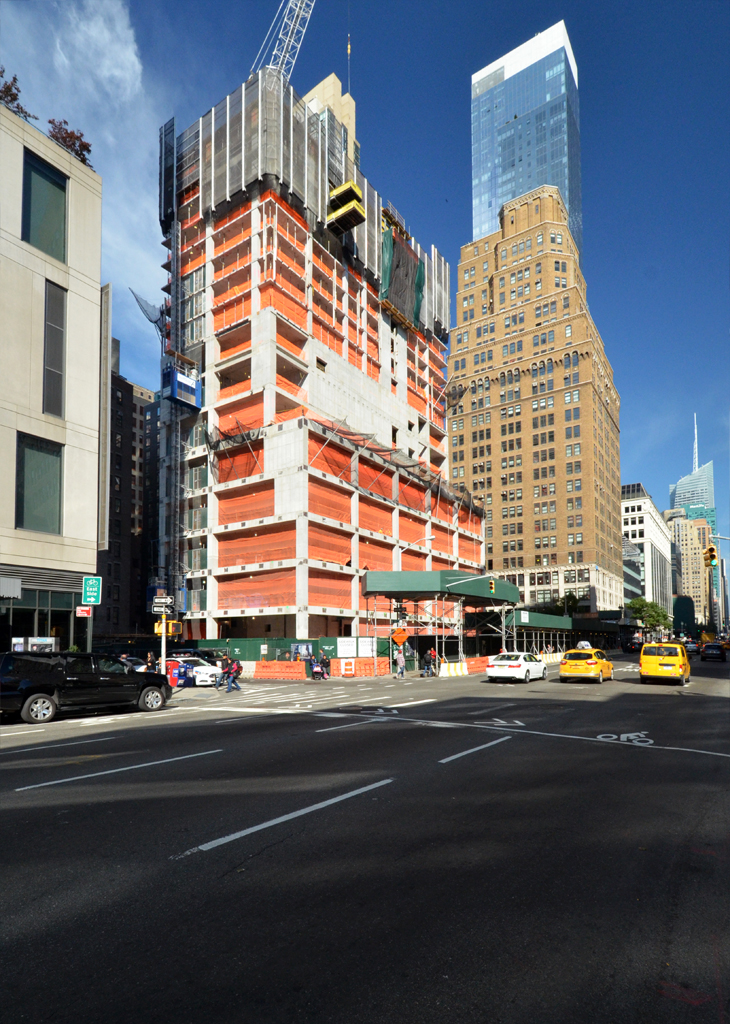 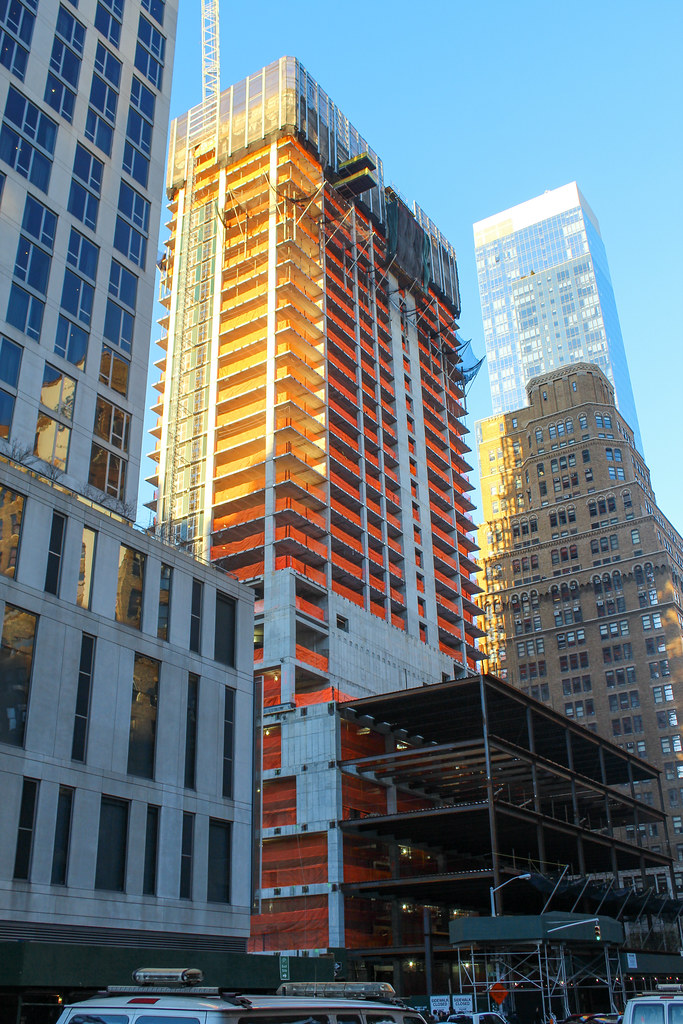 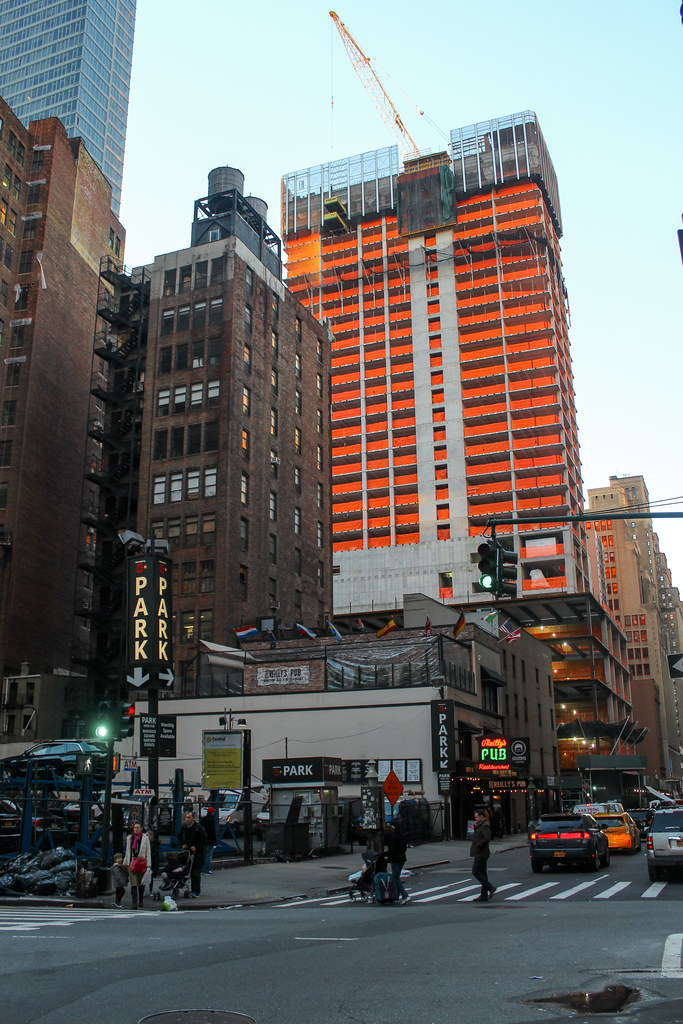 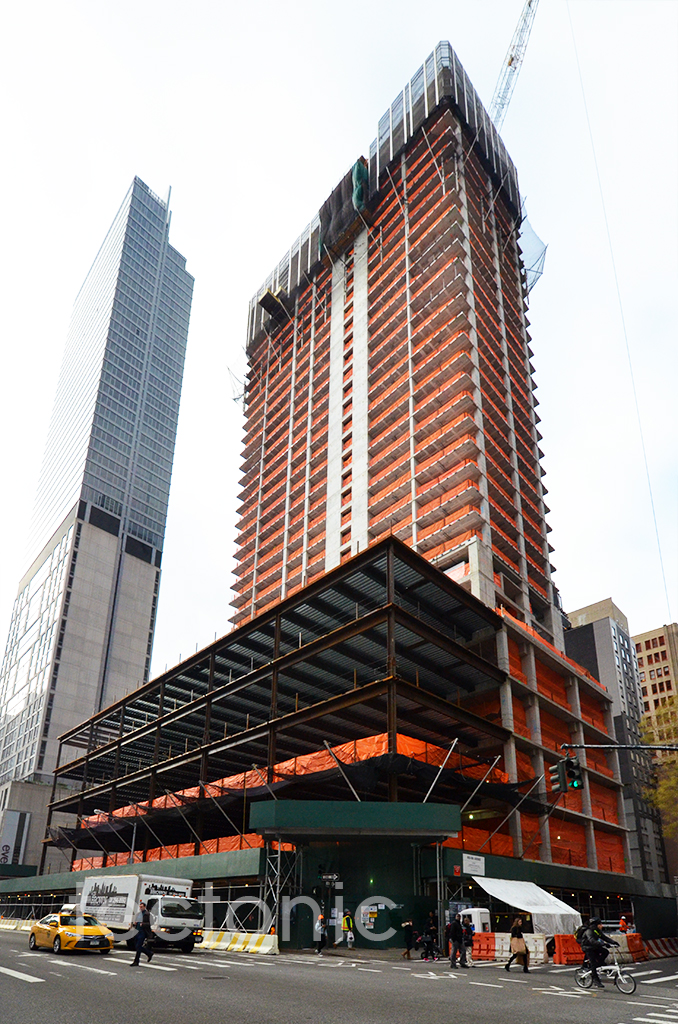 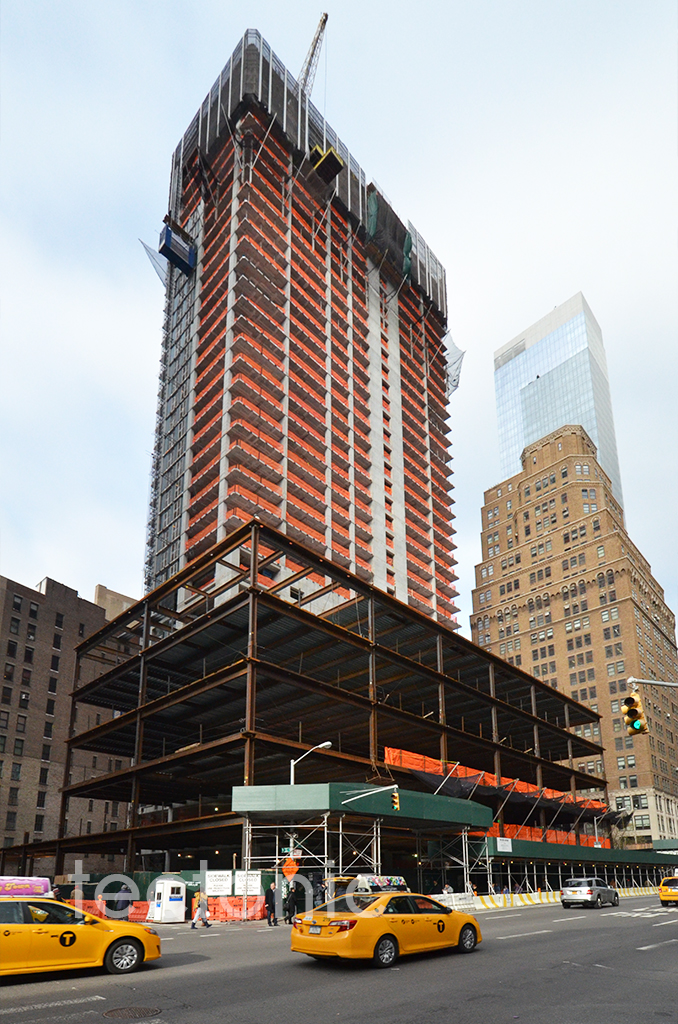 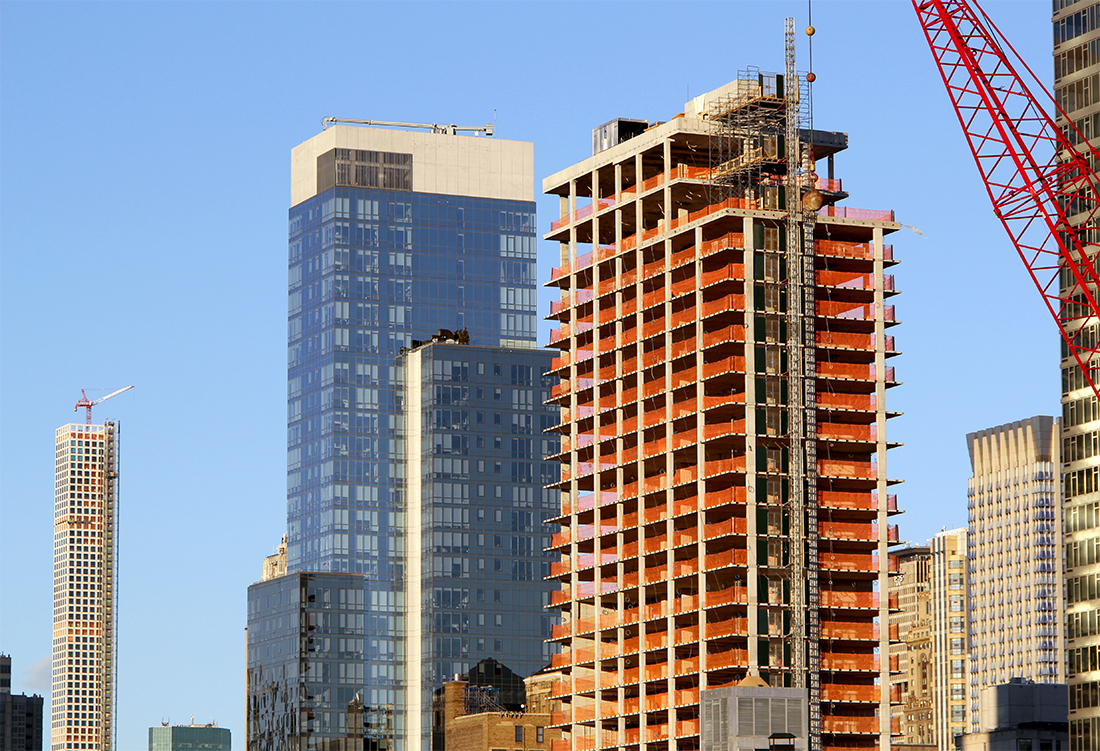 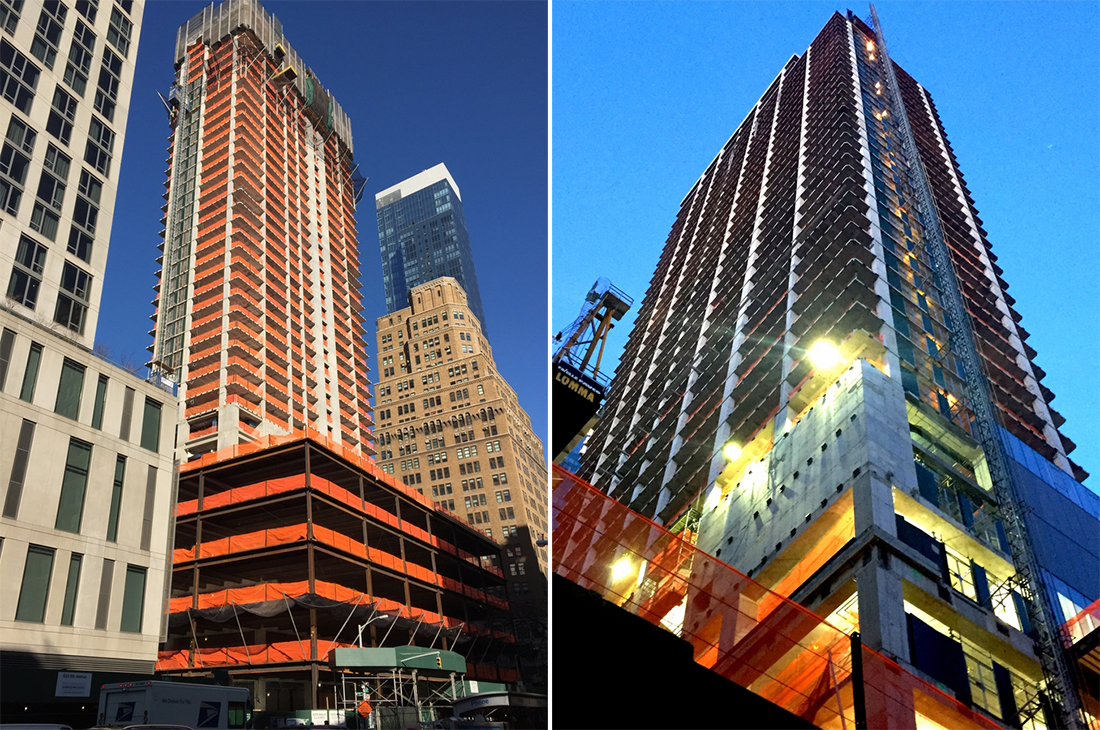 In the shadow of the Empire State Building, the concrete frame of 855 Sixth Avenue has quietly risen to its full 500-foot height. Spanning the full western blockfront of Sixth Avenue between West 30th and 31st Streets, the 41-story mixed-use tower, designed by COOKFOX Architects and co-developed by the Durst Organization and Fetner Properties, is poised to bring 190,000 square feet of commercial space and 375 rentals to the southern fringe of Herald Square later this year.

While unremarkable in design and imperceptible in the city’s skyline, the building’s small claim to fame may be that its 152-meter (slightly under 500 feet) height is sometimes regarded as the benchmark figure for defining a skyscraper. Therefore, statistically, 855 Sixth could be considered the shortest skyscraper in New York.

This turned out lousy.

Durst does not value aesthetics.

That’s not true. He hit grandslams with BofA and the Pyramid. He struck out here though.

You are right, Robert. I totally forgot about BoA and The Pyramid. My bad! 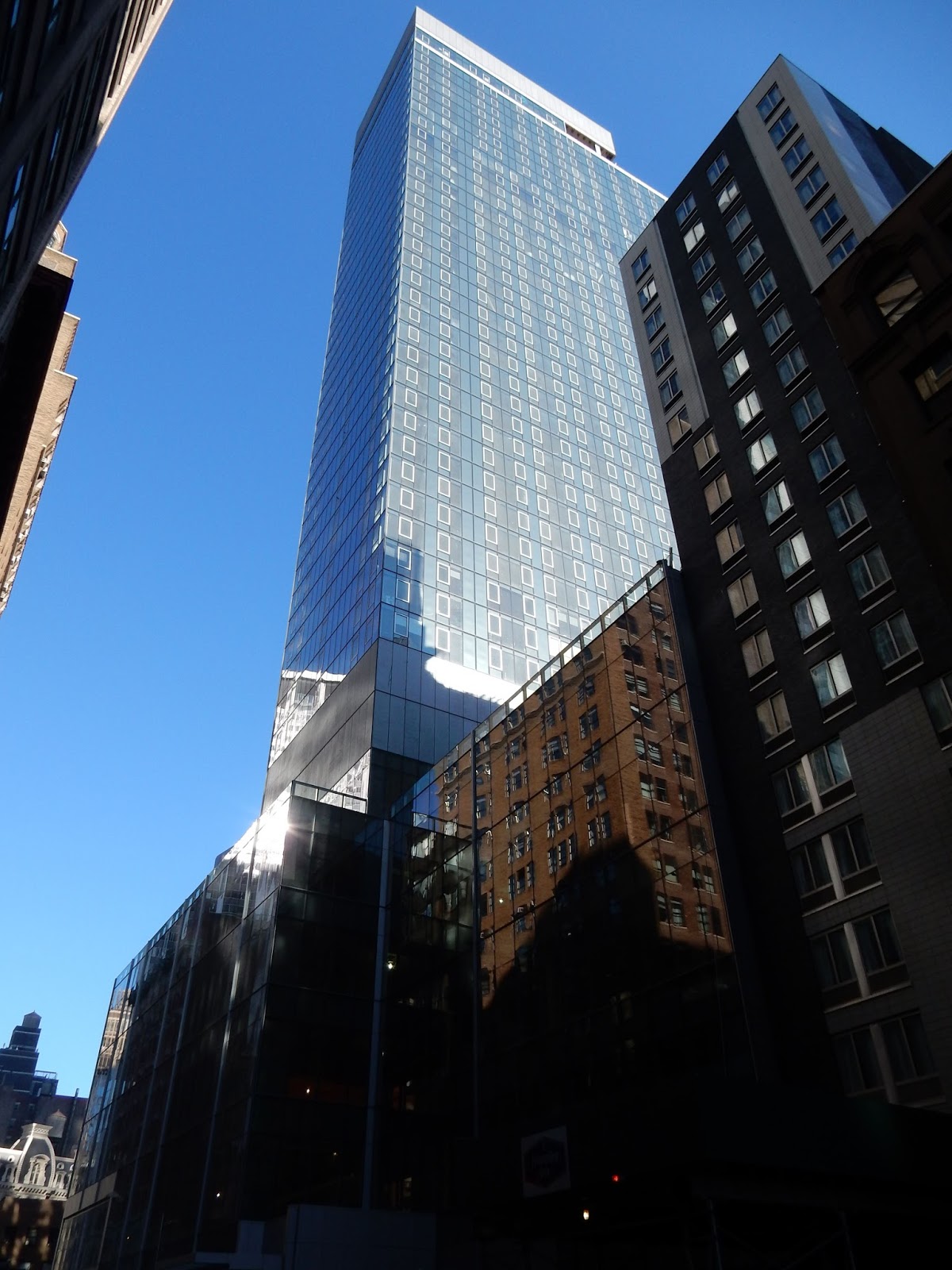 I walk by here a lot and never snap photos because it’s lousy. The metal window frames look terrible.