666 Fifth Ave. may be transformed into a slender tower

The office tower at 666 Fifth Ave. may be turned into a mall, hotel and residential tower. Jared Kushner and Steve Roth’s Vornado Realty Trust is mulling the repositioning of the 41-story, 1957-era building.

The Pritzker Prize-winning architect Zaha Hadid has already prepared a plan that would restack 666 Fifth Ave. into a slender, super-tall hotel and residential tower above a vertical retail podium. Vornado controls the property’s retail condominium, which it bought from Mr. Kushner, Carlyle and Crown Acquisitions three years ago for $710 million.

The Post has also learned that Pritzker Prize-winning architect Zaha Hadid has already prepared a scheme that would restack the current 41-story building into a slender, super-tall hotel and residential tower above a vertical retail podium.

Because of its location, a significant part of the tower would have unobstructed views of Central Park.

While a partner in the office portion — Roth’s company, Vornado Realty Corp. — controls the building’s Fifth Avenue retail condominium, which they purchased from Kushner Companies, Carlyle and Crown Acquisitions in 2012 for $710 million.

Known as a visionary, Roth is now developing the 950 foot-tall 220 Central Park South, which has sold over $1.6 billion, including a $200 million-plus penthouse.

“It is an extraordinary product and it’s a super location,” Roth enthused on the quarterly conference call in August.

The company previously developed 731 Lexington Ave. and the luxury residential condominium at One Beacon Court on the full-block former Alexander’s site and has redevelopment plans for the Hotel Pennsylvania and other areas around Penn Station.

The Kushner Cos. owns over 100 buildings in New York and is a major builder in New Jersey. It turned the top of the Puck Building into luxury penthouses and is redeveloping portions of Dumbo, Gowanus and Williamsburg.

Should the developers move ahead with the reimagined 666 Fifth plan, Vornado would be able to combine its retail and office assets into a spectacular new tower. The Zara store is a separately owned condominium and would be unaffected, sources said, but some office tenants, such as Colliers International, would need to relocate.

Neither Kushner nor Vornado returned requests for comment.
Such a project on the E. 52rd to 53rd Street block front would also create a new 50-yard line for high-end retail along the most expensive corridor in the world. It would become one of the first new major towers on Fifth Avenue since Kushner’s father-in-law developed Trump Tower in 1983 and Dr. Axl Stawski developed 505 Fifth in 2006.

“Given its proximity to Bergdorf and Saks and the Fifth Ave address, it’s a no-brainer,” said Faith Hope Consolo, chairman of Douglas Elliman Retail. “New York is a retail rich city and we’ve now proven that vertical retail works in Manhattan.”

This is amazing, f.cking news!

I like how the morons on other forums are criticizing the replacement of 666 5th with a 1,400’ Zaha tower.

By the way, the office portion of this tower is really emptying! Norton Rose’s lease expires in 2016, and they’re moving to 6th.

Orrick Suttcliffe recently moved to Blackrock on 6th, and V&E’s lease expires in 2020! Vornado also discussed reports that it is looking to reposition its office and retail property at 666 Fifth Avenue, which Roth described as “a magnificent asset, brilliant located” in the heart of Fifth Avenue’s desired retail corridor. “The highest and best use for this property if it was not encumbered by the building would be a series of mixed uses,” Roth said, adding that Vornado was in talks with Jared Kushner’s Kushner Cos. and other partners at 666 Fifth Avenue to find “the optimum business plan” for the site. - See more at: http://therealdeal.com/blog/2015/11/03/vornado-cheers-pricey-leases-talks-up-chelsea-office-market/#sthash.o4oVKDdn.dpuf

It is envisioned here along with other projects in a 6sqft/cityrealty rendering; right of 432 Park and towering over 53w53rd: 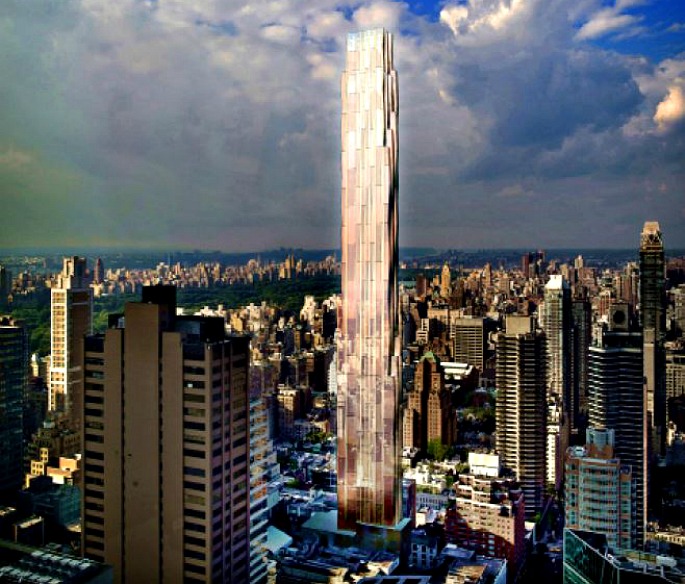 A Zaha supertall would be amazing in an unbelievable location.

I agree. This is an amazing site , and since everything north of here on the west side of 5th is landmarked, nothing would ever obscure the views.

The multistory retail could be uber-Epicurian.

For the next two years, Phillips Nizer will remain in its 49,846 square feet at Vornado Realty Trust and Kushner Companies’ 666 Fifth Avenue.

strong textTo the extent that the remaining tenants have been given 3.5 year extensions, it appears that Virnado plans to start demolition in 2020.

Amici Capital Management, an investment advisement firm, inked a 13,422-square-foot deal at the 1.5-million-square-foot building between West 52nd and West 53rd Streets, according to a CBRE press release. The firm, which was originally founded in 1976, is located on part of the 34th floor.

Also on the 34th floor of the 41-story office tower, Atlantic Investment Management signed a lease to stay in its 11,330 square feet of the building, per CBRE. The company bills itself as a “$1.5 billion alternative equity investment firm,” on its website.

David Hollander and Sam Seiler of CBRE represented the tenants in both deals, while the landlord was represented in-house by Vornado’s Josh Glick and Jared Solomon. Vornado did not immediately return a request for comment via a spokesman.

Asking rent in the deals was not immediately available. Each renewal was for three and a half years, according to the CBRE brokers.

Kushner paid $1.7 billion for the building in 2007, making it the largest single-property transaction at the time (Jared Kushner, the company’s chief executive officer, owns Observer Media, which publishes Commercial Observer).

Vornado came in as a partner for the building’s office portion in 2011, paying a reported $80 million in cash. The following year, the real estate investment trust bought the 114,000-square-foot retail condominium for $707 million. The retail tenants include Hollister and Uniqlo, which in 2010 inked a 15-year lease to pay $300 million over the term that was a record at the time.

The landlords are considering converting the building into a combined hotel and residential tower on top of the existing retail condo, as The New York Post reported in September. Architect Zaha Hadid has been signed on to mull over changes to the 58-year-old building.

“We were happy to work with Vornado to complete a [three-and-a-half]-year extension which worked out to the benefit of both parties considering the potential redevelopment of the building,” Mr. Hollander said via a spokeswoman.

Phillips Nizer, an 89-year-old law firm specializing in national and international legal matters, recently renewed its lease for two years, as CO reported last month. The firm will stay in 49,846 square feet on the entire 28th and 29th floors. Asking rent in that renewal was in the mid-$60s per square foot.

Terrible news to report this evening.

That’s sad. She was amazing.

Hopefully, her firm will carry on.

OMG! It is amazing! Where did you find that, Robert?

The 6sqft article where that image comes from gives it a caption like “Google Earth rendering of what a Zaha Hadid design could look like.” I’m almost positive it’s just a mock-up using a stretched version of her Miami tower, and not the real design.

I did not realize where that image came from. That site is usually wrong, so I deleted it.

Yeah I agree. Its kinda low to use it as a sort of publicity tactic. For one, its misleading as hell.

I think 6sqft should of said that such a potential tower will draw on elements used in Hadid’s previous work, and not use a stretched our tower in Miami as a hypothesis for what it would look like. “Could” is a bad choice of wording.

But it all goes to show why YIMBY is the source of precise information. Precision is key.

6sqft I will give them credit, has some interesting mid rise renderings, but I’ve noticed when it comes to skyscrapers, their speculation is often exaggerated and misleading. 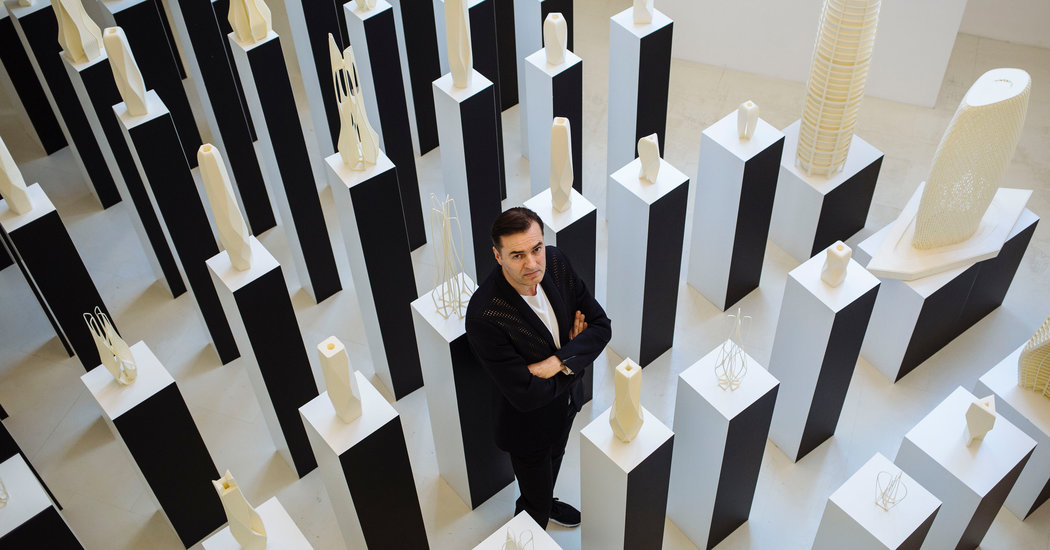 Grieving and Going Forward: How Zaha Hadid’s Firm Plans to Move On

Patrik Schumacher, who worked alongside Ms. Hadid before her recent death, says the architecture firm will remain a “vibrant address for major work.”

Yessss this could mean this project is still on. Quote from the article: “the firm was moving forward with existing projects, including a stadium for the 2022 World Cup in Qatar; a tower in New York; a bridge in Taipei, Taiwan; and the Iraqi Parliament.” .A tower in New York sure does sound promising.

Apart from the very valuable retail space. This tower will be THE BLOCKBUSTER residential site in the next cycle. Vornado does not plan to start demo for a few years,