Dock Street Dumbo, Two Trees’ sprawling, neighbor-hated mixed-used development, is finally making upward progress. DumboNYC snapped a recent photo of the site, and the structure is now visible about the construction fencing, sitting at about the second story. The site has been essentially a hole in the ground with a few bits for a few years, but now, clearly, things are progressing at a normal speed. We reached out to Two Trees for the most updated timeline and details This development, which will have at least 300 rentals, has been in the works for at least seven years, and it has seen quite a few ups and downs and alterations, but let’s review what we know from past coverage.

UPDATE: Two Trees sent along more details, after the jump.

[Rendering of the project on the site’s construction fence]

There will be a 17-story tower and a shorter building around 8-stories tall. It will be mixed use, there will be a 50,000-square-foot school, and part of the 300 rental units will be set aside as affordable. Two Trees’ website says the project will LEED certified. Their site also has this tidbit, which makes it seem like everything has always been hunky-dory with the neighbors: “This project is a model for showcasing how public-private partnerships between developers and the City can result in a built environment that more effectively meets the needs of the surrounding community.” Let’s not forget that this “model” development caused outrage in the community (it’s blocking Brooklyn Bridge views, for chrissake, and Two Trees had to fight off a couple lawsuits from said outraged community, which included a hefty number of celebs.

Here’s what Two Trees had to say:

The project architects are LEESER Architecture and Ismael Leyva Architects. The building is massed so that the lowest portion is 7 stories, stepping up to 9 stories along Water Street and 17 stories along the eastern property line (the furthest from the bridge.) The building will have a total of 290 units, including 58 affordable units. The marketing of the affordable units, with a preference for Community Board 2 residents, will begin very soon. The affordable apartments will be available at 50% and 40% of area AMI. Rents will range from about $500 to $1000 per month. The remaining units will be market rate. No pricing info yet. The apartments should be ready for occupancy in the first quarter of 2015. There will be a 300 seat public Middle School with an entrance along Dock Street and some ground floor retail along Water Street. We will turn over the core and shell of the school space to the School Construction Authority this August. They have estimated a two-year build out of the school interior, in time for September 2016.

Here’s a construction photo I snapped from the Manhattan Bridge on July 4th. I like its massing; it steps up from the waterfront buildings and fills some of the volume missing between the two bridges. -Colin 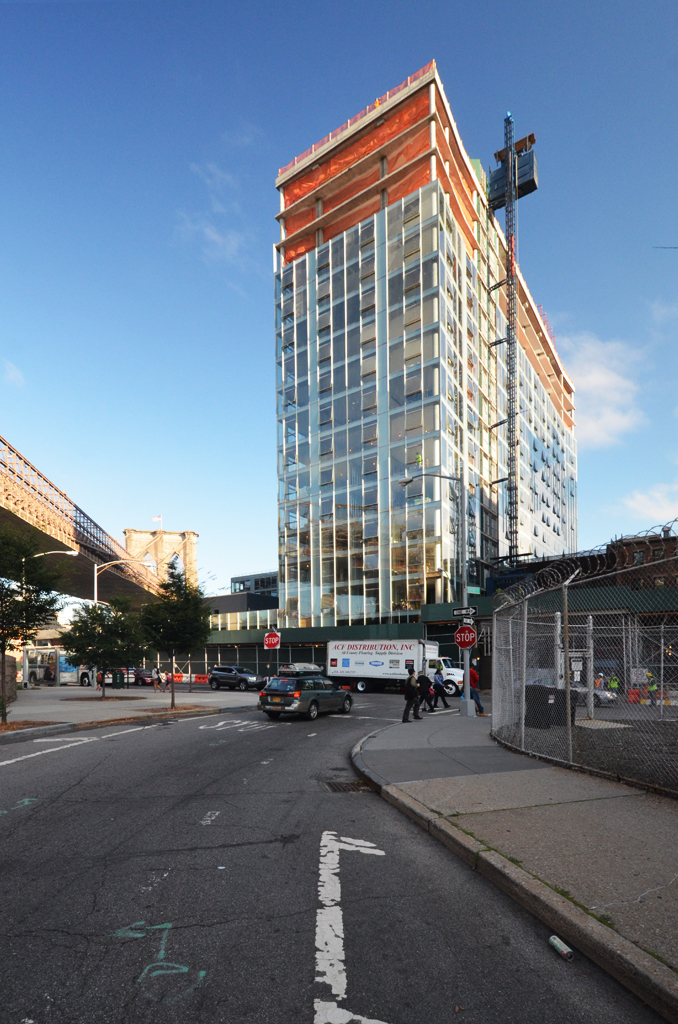 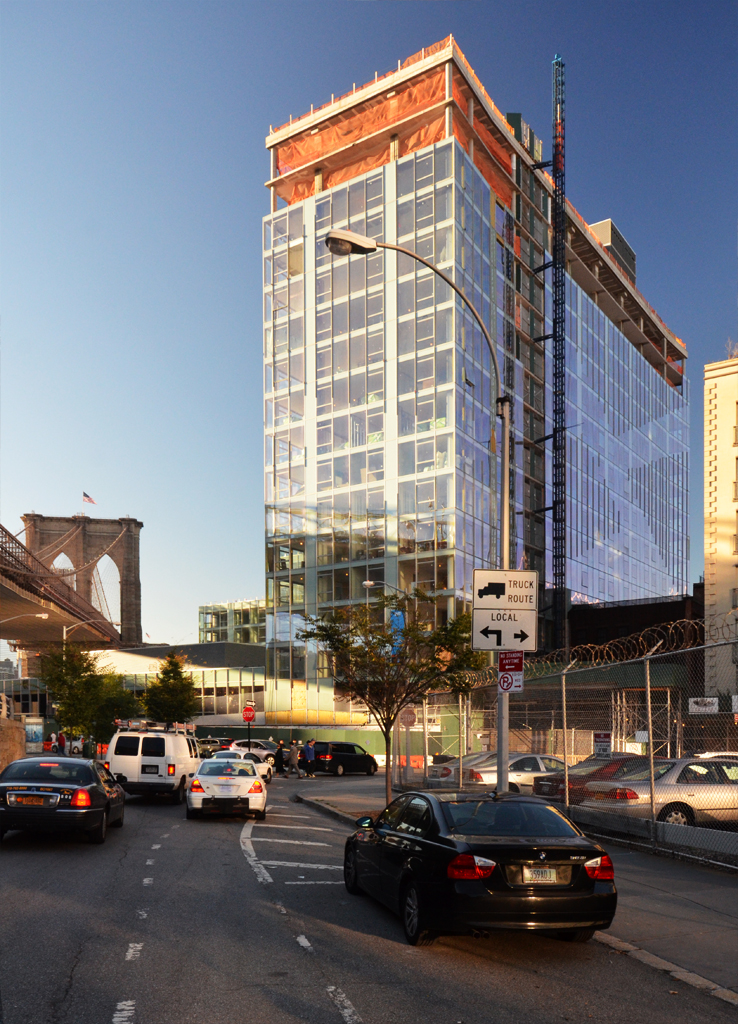 Interior Renderings up for 60 Water Street

Here’s a glimpse of what the inside of 60 Water Street in Dumbo will look like. Interior renderings are up for the units, which started leasing in early October.

The interiors are sleekly minimalist. The palette is gray and white. Although pricing is on the high end for Brooklyn (the building is next to the Brooklyn Bridge, with views), units don’t look over-the-top luxurious but well designed. We like it.

Click through to see more. What do you think?