Developer Sam Chang‘s McSam Hotel Group has picked up 334 West 36th Street from the Postgraduate Center for Mental Health for $50.8 million. Mr. Chang said he doesn’t know yet whether he plans to erect a hotel or residential rental building at the site.

The sale of the property, which is between Eighth and Ninth Avenues, closed on Aug. 6 and appeared in property records today. Mr. Chang said Postgraduate Center for Mental Health, which provides mental health treatment, housing, job training and placement as well as case management services, retains the right to occupy the premises until next year.

This sucks. That’s a beautiful building.

Hopefully Chang keeps the right portion (with the bay windows – those are awesome). And I thought he said he was retiring lol.

Gene Kaufman was hired to serve as the architect of record.

The six-story building will be demolished by April and the hotel is expected to open by spring 2017, Chang told TRD.

“I’m planning to develop one hotel at a time,” Chang said. “I will work on the Eighth Avenue Holiday Inn until April and then focus on this hotel.”

Holy historic preservation! Developer Sam Chang has saved my cherished, long-ago, church-office window after all. Maybe it was divine intervention because Chang, who’s put up dozens of characterles…

It’s fantastic that they’re preserving the façade, but everything else is absolutely hideous. What the hell is that blank street wall fence-thing?

Yeah this proposal is ugly.

Does anyone know what this building is that is under construction 1 lot to the east at 320 west 36th? 334 with the red marker and 320 is the site to the right probably taken last year when the lot was being cleared.

Looks like another boring hotel but it is wierd that a large building like this doesnt have its own thread yet?

Here it is from yesterday morning

Here is the google street view from last year showing both sites. The on site rendering shows it will be another hotel. 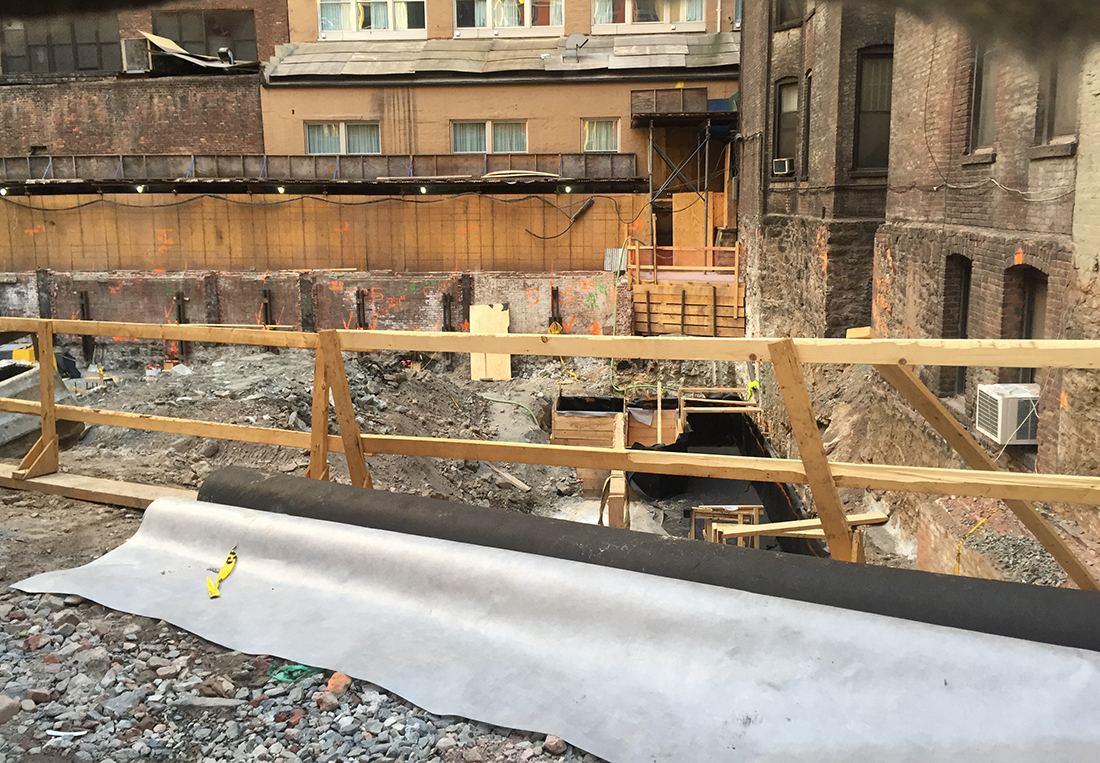 They are at ground level now. Should start to rise soon.

What the hell happened here? I thought they were supposed to keep the old church facade up to the the 2nd floor. As of sept last year they kept most of the facade to the 2nd floor and even included it in the renderings. By Late Nov last year it kinda looked like some of the facade had came down a bit on the east side. Today it appears as though they have only kept the first floor facade because the rest is completely gone now. I assumed the city made them keep part of the facade so it would be strange to then say they can keep half of it? Maybe part of it crumbled or something and they had to tear it down.

After going back to that nypost article above it appeared as though mcsam voluntarily kept the facade. So i guess he can do whatever he wants. Part of the tower portion was always going to be rebuilt so it seems now most of the original facade may just be rebuilt to look like the old church. Meh.

The nets are down to show the final cladding.

They never kept the facade up. They demolished the entire thing I think and just recreated something close to the original facade.

Wow, that’s very disappointing. It looks nothing like the original besides the massing of it.

This is disgraceful. That was such a beautiful building.

Chang and Kaufman are a boil on the ass of NYC. Who the hell stays at these monstrosities anyways?

This is disgraceful. That was such a beautiful building.

Chang and Kaufman are a boil on the ass of NYC. Who the hell stays at these monstrosities anyways?

Folks with nothing to lose. Those that have hit rock bottom.