Robert Greenberg, the company’s founder, chairman and CEO, made an announcement at a staff meeting today that the building at 350 West 39th Street “is for sale and we are looking for new space,” according to someone who was in attendance. But, the building has been for sale for a couple of months, said Robert Knakal of Massey Knakal Realty Services, who has been marketing the building with colleague David Kalish, and a deal will soon be ironed out.

Mr. Knakal said he anticipates a contract will be signed within the next couple of weeks and the sale price will be “well north of $110 million.” He said that while part of the site falls within the Garment District, the zoning allows for a development to be all residential, all commercial or mixed-use.

Mr. Greenberg, who was inducted into the Advertising Hall of Fame this year, bought the two-story 1968 building between Eighth and Ninth Avenues in 1984, according to property records. It is is a 300,000-square-foot, block-through development site near the Hudson Yards.

“For a deal of this size and if you believe you can build a 300,000-square-foot site, notwithstanding the Garment Center zoning, it should be a $150 million site,” said a source with knowledge of the market who asked for anonymity.

According to another source, the company is moving to larger digs in Manhattan and may already have a site lined up.

A spokesperson for R/GA, which employs 1,400 people, did not immediately respond to requests for comment.

Mr. Chang said he doesn’t know yet what he wants to do with the site, which can accommodate a building of up to 300,000 square feet. When asked if he would erect a hotel, Mr. Chang replied: “It might be a residential and hotel combination. I don’t know yet.”

The seller, Robert Greenberg, R/GA’s founder, chairman and CEO, bought the two-story 1968 commercial building between Eighth and Ninth Avenues in 1984, as CO previously reported. R/GA will vacate the building next year. It wasn’t immediately clear where R/GA would be moving. A company spokesman didn’t immediately respond to requests for comment.

Robert Knakal of Massey Knakal Realty Services marketed the building, which is between Eighth and Ninth Avenues, with colleague David Kalish. Mr. Knakal declined to comment. 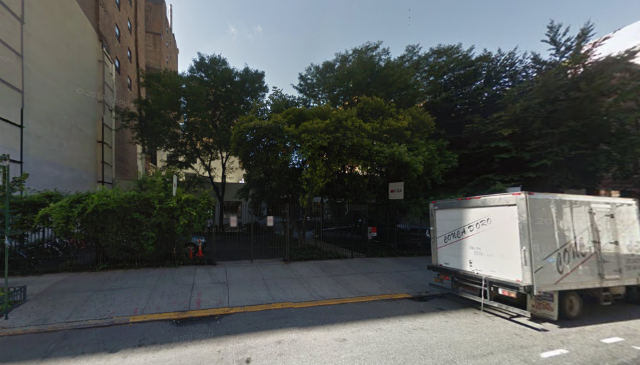 A large development site in the Garment District sold recently, in a deal brokered by Massey Knakal, according to a press release put out by the brokerage.

The block-through site, from West 38th and 39th Streets, between Eighth and Ninth Avenues, has around 125 feet of frontage on the side streets, and can accommodate up to nearly 300,000 square feet of development. The contract price exceeded $112 million, working out to around $400 per buildable square foot.

Hotel developer Sam Chang, of the McSam Hotel Group, is the buyer. Reached by phone, he told YIMBY that it was too early to discuss plans, which have not yet been finalized. The property is currently leased to R/GA, an advertising agency, who won’t vacate until late 2015.

While the land’s zoning would accommodate just as much housing as commercial space, this area is one of the few parts of the city where hotels are often the highest and best use. The area south of the Port Authority Bus Terminal in particular has become a hotel hotspot, with a trio of budget hotels on West 40th Street erected by Sam Chang’s primary hotelier competitor, the Lam Group. 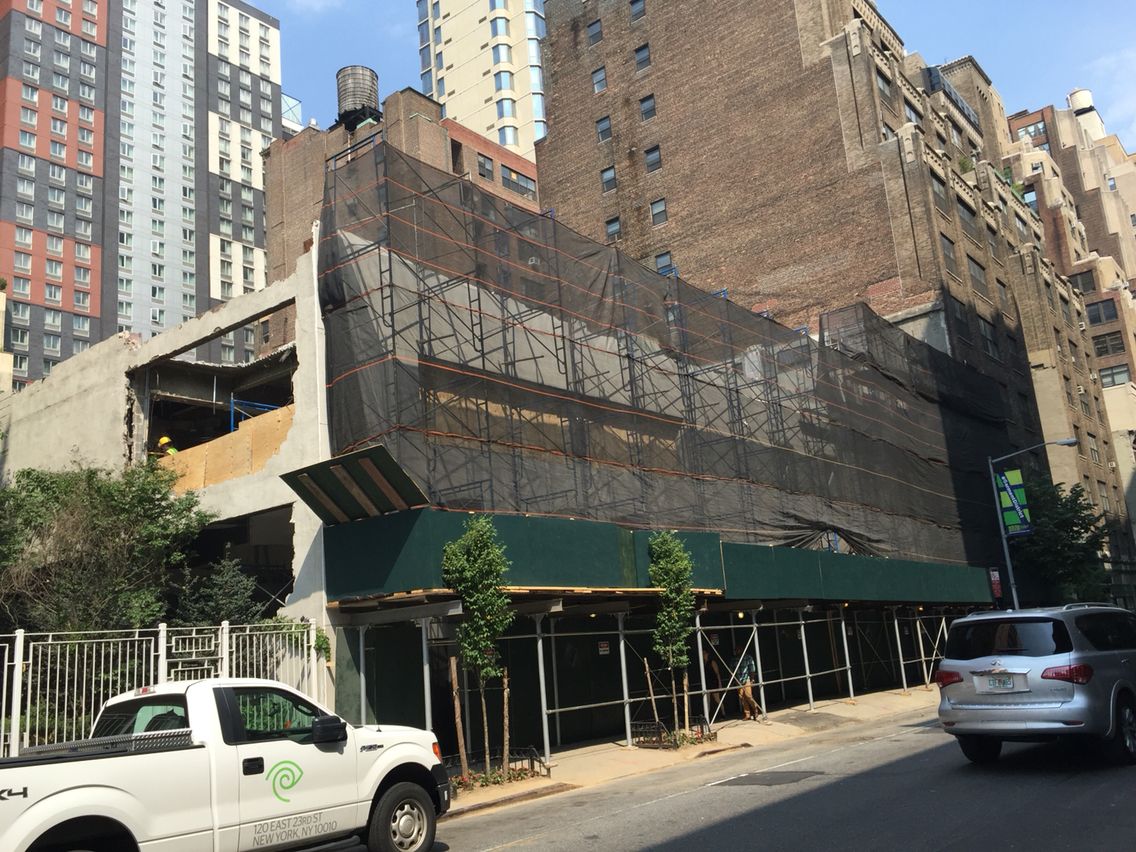 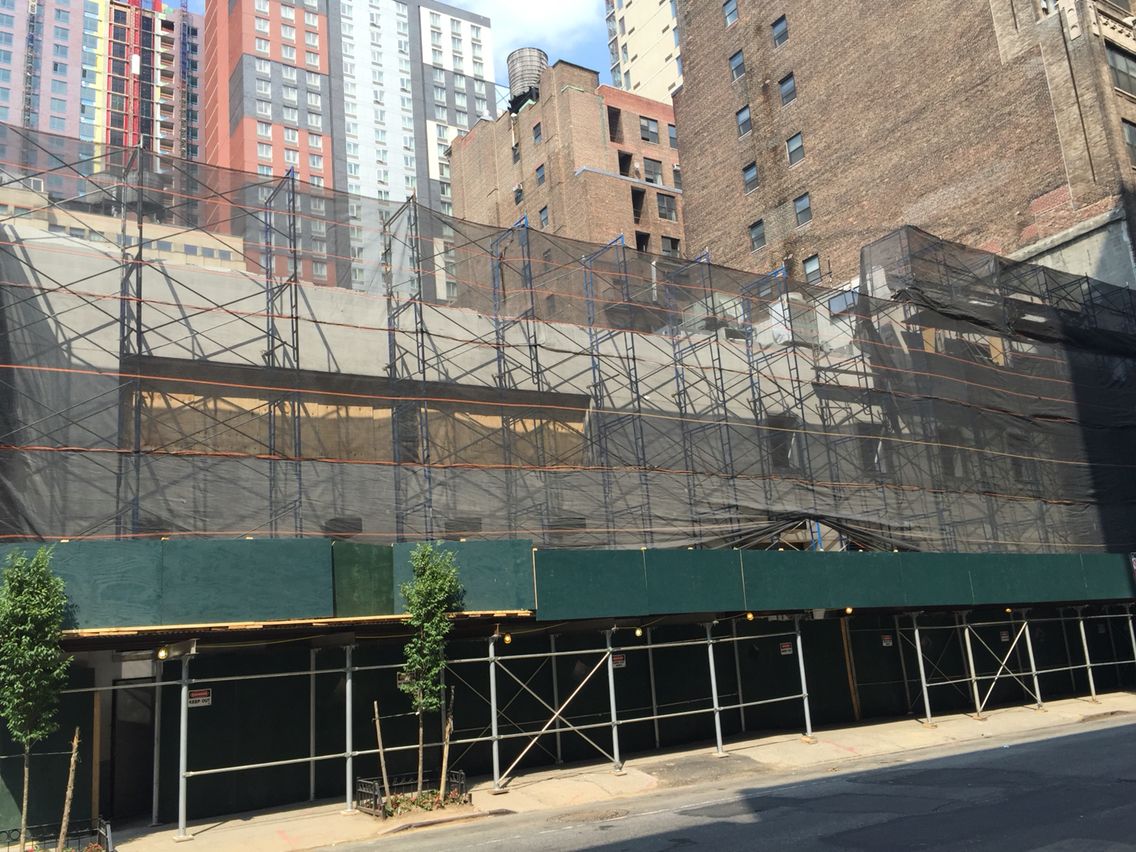 It’s going…going… It’s getting there. 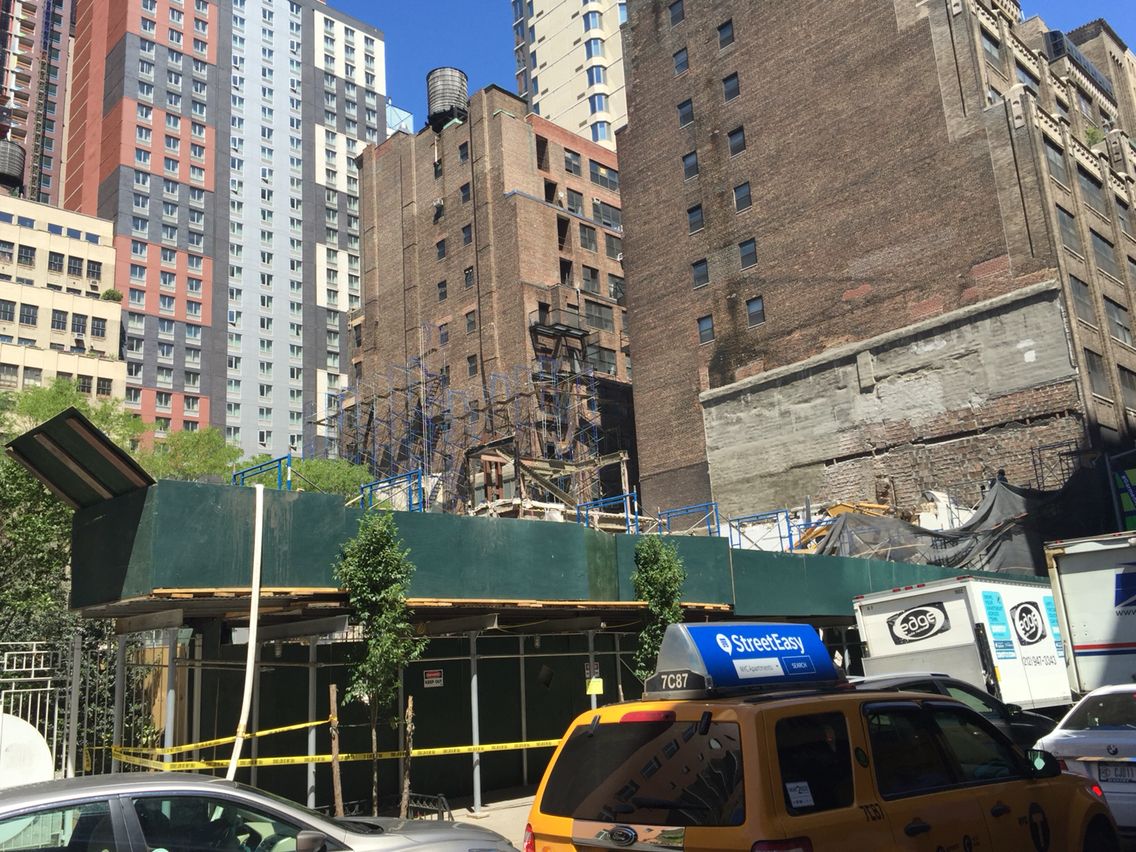 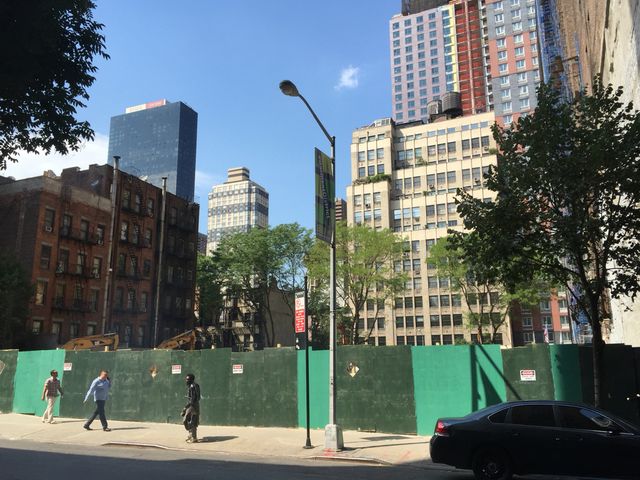 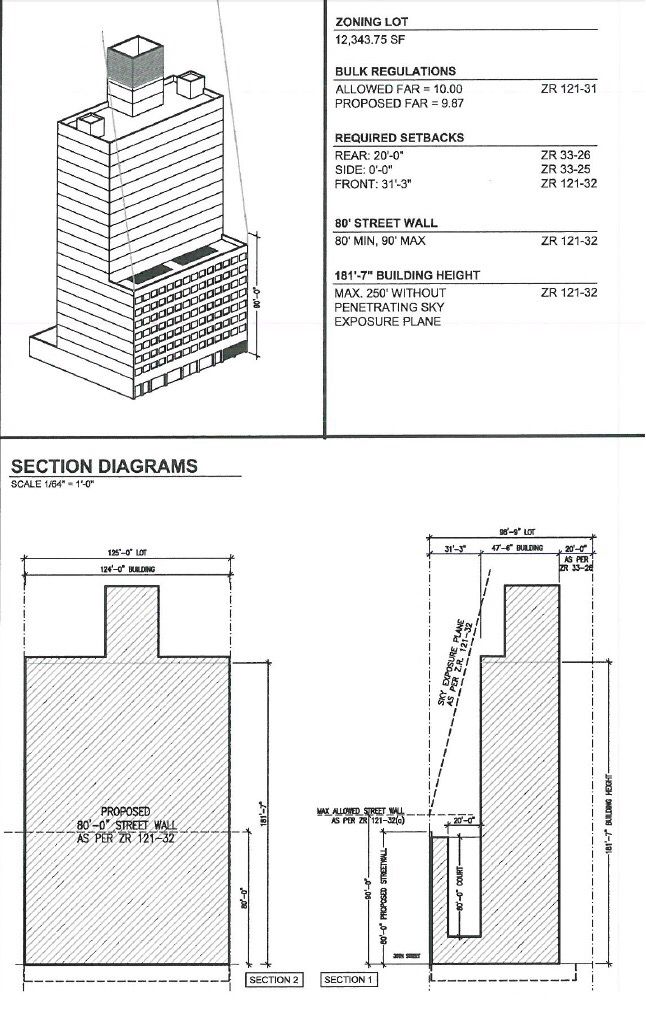 181ft with 20 floors? Those must be some seriously low floor to ceiling heights!

I’d probably need to crouch all the time if I lived there!

This is going to be lame! This is a really nice sized block through site. What a shame.

Interesting design though, not much thought in it but it has an interesting second wall/sculpture element in it I guess. Not sure which is definitive but I for sure prefer the left window design, its got much more personality. 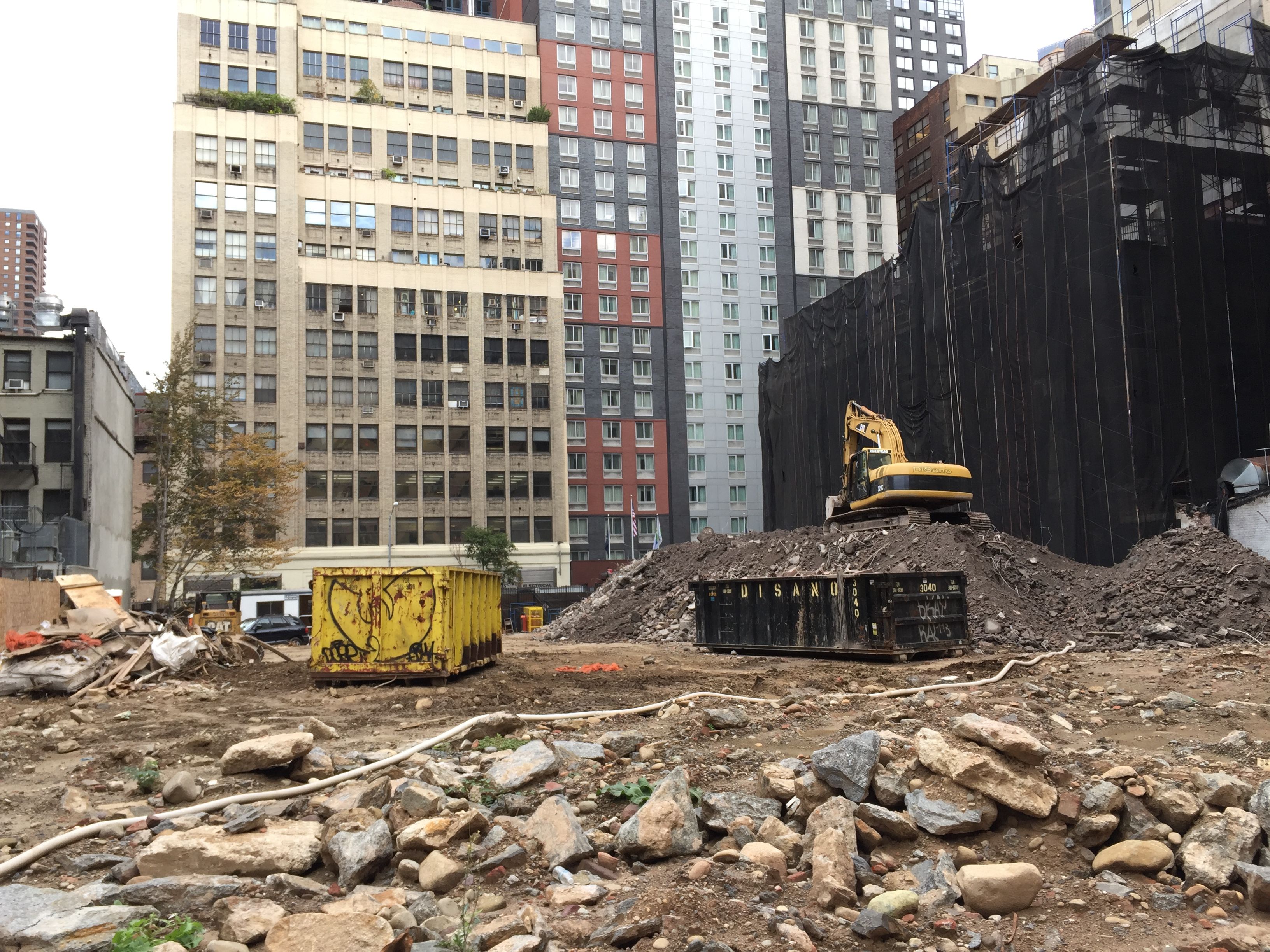 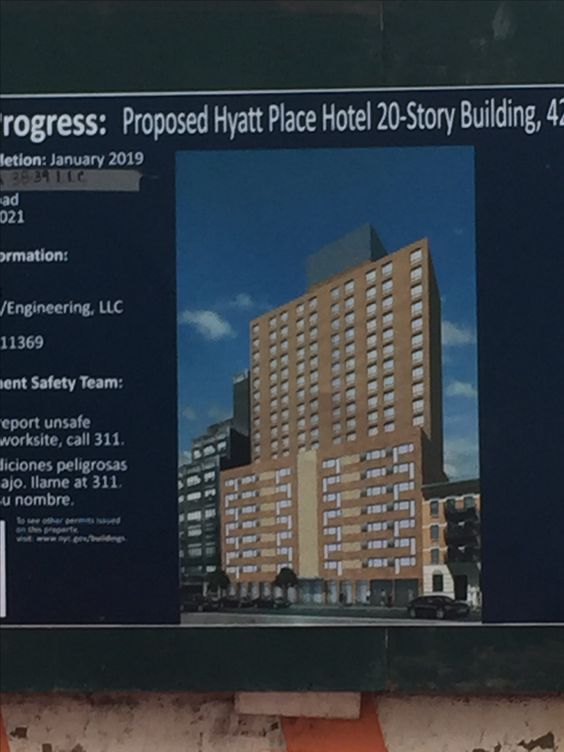 Horrible looking. Yet fitting for the neighborhood.

Not sure if the rendering got just slightly better or of it is just the opposite side of the block? Sam Chang secured a $120 million debt-and-equity package for his Hyatt Place hotel now under construction in the Garment District, he confirmed to The