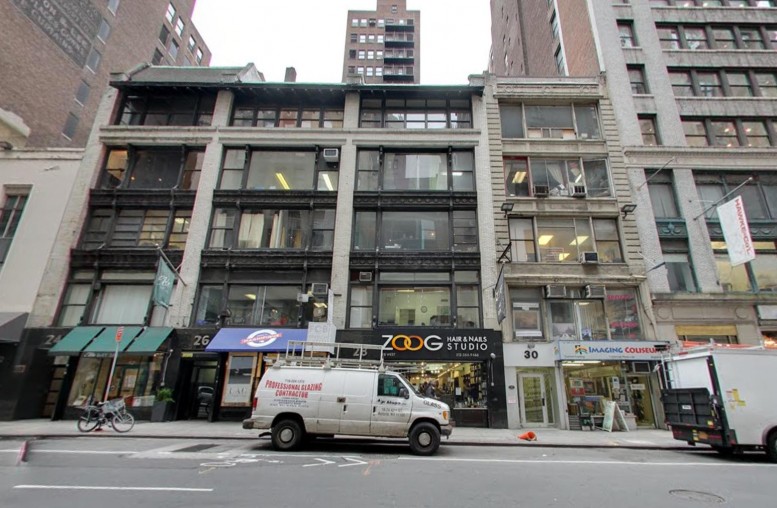 Fortuna Realty Group has filed applications for a 27-story, 299-key hotel at 30 West 39th Street, in Midtown South. The project will encompass 133,523 square feet and rise 323 feet to its roof. A restaurant and an outdoor bar will be located on the ground and second floors, followed by hotel rooms across the fourth through 26th floors. Nobutaka Ashihara’s Financial District-based firm is the architect of record. The 8,662-square-foot assemblage, at 24-30 West 39th Street, is occupied by four four-story commercial buildings. Demolition permits were filed last year.

Thank god that junk is coming down! As Fortuna Realty Group’s Aloft hotel continues to rise at 25 West 38th Street, construction has begun on its latest project one block north:

Not much progress since April. I don’t even think anyone was working on it earlier this week.

30 West 39th Street rises above Midtown. Fortuna Realty is developing the 300-room, 27-story hotel, while Peter Poon Architects is the designer of record.

They are starting to install glass cladding.

It looks good. I feared that it would be golden in color.

This turned out far better than the renderings. The building across the street is a masterpiece.

I hope that this crap down the street is redeveloped as was once planned.

Construction has topped out on 30 West 39th Street, a 27-story 300-room hotel from Peter Poon Architects and Fortuna Realty in Midtown.

Really glad this isn’t the gaudy Vegas gold depicted in the original renders. Still cheap looking but better than most of the new roach hotels. I doubt any of these cheap budget hotels will even be standing in 50 years. I’m sure they’re constructed very poorly.

Those future bordellos aren’t going to build themselves!