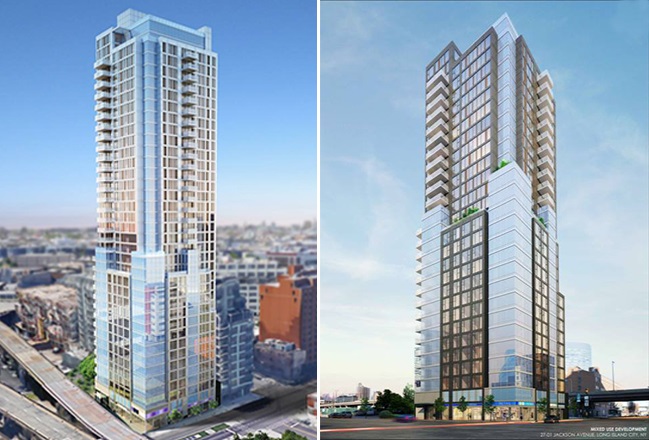 While details remain scarce, renderings recently posted on the Lions Group’s website depict that the taller east tower will rise nearly 40 stories while the shorter west building will be about 30. 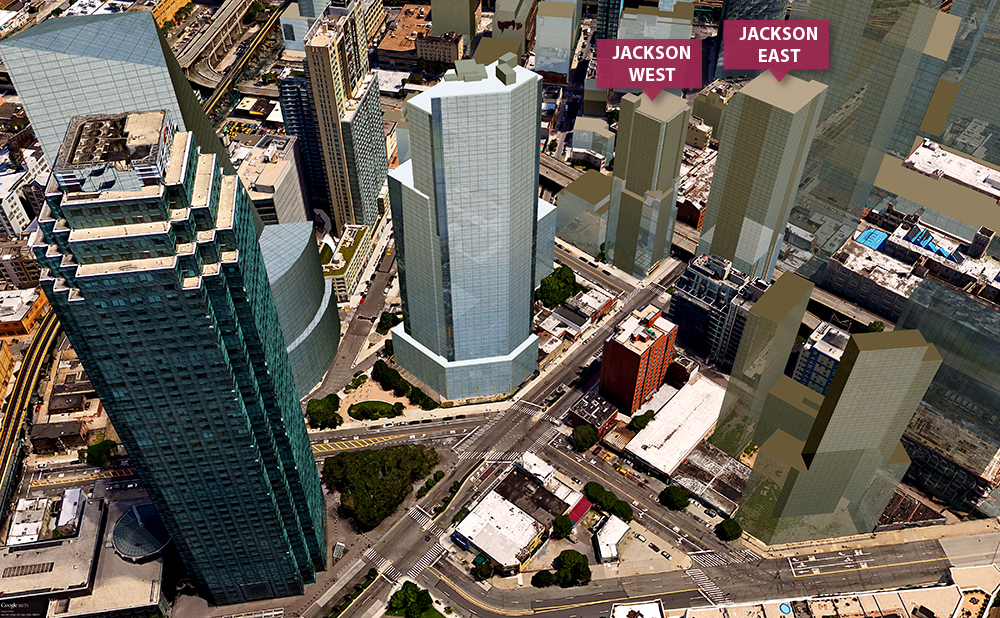 Designed by the Queens-based Raymond Chan Architects, the towers’ facades are an eclectic mix of glass and brick, with building corners glazed with floor-to-ceiling windows and balconies siding many mid- and upper-floor units.

The images also reveal retail storefronts along their Jackson and 43rd Avenue frontages, which will continue to enliven this once-pedestrian-unfriendly stretch. Back in 2010, the Jackson Avenue streetscape project humanized the corridor with a landscape median, new lighting, and an improved roadway design.

While still unclear if the towers will contain rentals or condos, they will rise from a hotbed of development activity in Long Island City. Across the elevated Dutch Kills Street (a vehicular High Line of sorts that streamlines traffic to and from the Queensboro Bridge) is the site of Rockrose’s conversion of the Eagle Electric Warehouse and its accompanying 54-story tower. TF Cornerstone’s 50-story mega-rental at 43-25 Hunter Street is already underway across 43rd Avenue, and along Purves Street, a string of recent condo and rental mid-rises that include the Vere Condominium, Purves II, and Lions Group’s own Vantage Purves and the Vista, have already created one of the district’s first residential enclaves.

Jackson west is already almost 10 floors up. Taken 6/17. I think they havent started east yet.

The site is correct - being the site surrounded by the green fence. But the 10 story building in this pic under construction is 27-03 43rd ave.

Here is the same site as of yesterday 11/5

There was a piledriver on site the other day but I dont think anything was actually going on here… Still seemed mostly quiet.

Fetner Properties and Lions Group NYC are moving forward with their plans for a new mixed-use complex in Long Island City.

The partners pre-filed an application with the city to convert a vacant lot at 27-01 Jackson Avenue into a 27-story tower with 139 residential units, a portion of which will be affordable, and retail space on the first floor.

The project, which will also have a second building, is a partnership with the city’s Department of Housing Preservation and Development and the Department of Citywide Administrative Services.

The building’s total size would cover some 191,700 square feet, with 91 parking spaces across the first three levels and residential units starting on the sixth floor.

Fetner and Lions did not immediately return requests for comment.

The tower is one of two planned as part of the project for Jackson Avenue, located near the Queensboro Bridge approach ramps.

Plans for the other, at 26-32 Jackson Avenue, have yet to be filed with the building department. That building will be 49 stories tall with about 249 market-rate and 112 affordable apartments.

Both buildings went through the city’s Uniform Land Use Review Procedure, receiving final approval in December.

The J Associates have revealed the first architectural renderings of a 13-story mixed-use building at 26-04 Jackson Avenue in Long Island City.

Permits Filed for a 49-Story Residential Tower at 26-32 Jackson Avenue in...

YIMBY has the latest permits filed for a 49-story residential tower at 26-32 Jackson Avenue in Long Island City, Queens.