NEW YORK | 261 W 34th St | Ft | M | Fl | Pro
The north side of 34th between 8th and 7th is a disgrace, particularly on the western end of the block. However, several properties recently changed hands, and I anticipate that this junk will be redeveloped.

261 W 34th was sold recently, and the junk store that it houses is now gone.

I would not be surprised if Vornado owns the LLCs which bought this garbage. It owns the eyesore on 34th and 8th from which TGI Fruday’s recently moved. Given that Vornado owns a lot of major buildings in this area, it has a significant incentive to clean it up, particularly if it wants to lure a tenant to anchor 15 Penn.

Chetrit bought 245-247 W34th and planned a small hotel. Maybe he will flip the property.

Vornado better get to work!

Vornado Realty Trust picked up a commercial building near Penn Station for $28.5 million in a move that could hint at greater plans to come.

Clean it up, Vornado!

Robert, would you say this is one of the worst areas in all of Manhattan?

Basically, Lion, but it will improve dramatically. But for a few lame corners like this one, the area consists primarily of beautiful skyscrapers from the early 1900s. Vornado will clean up the limited schlock. 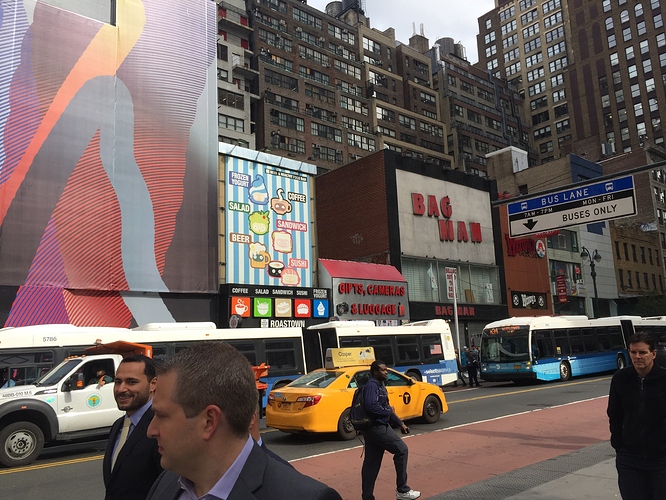 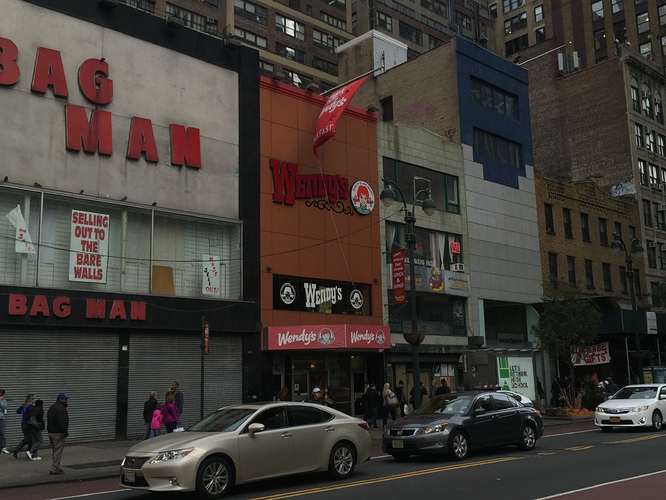 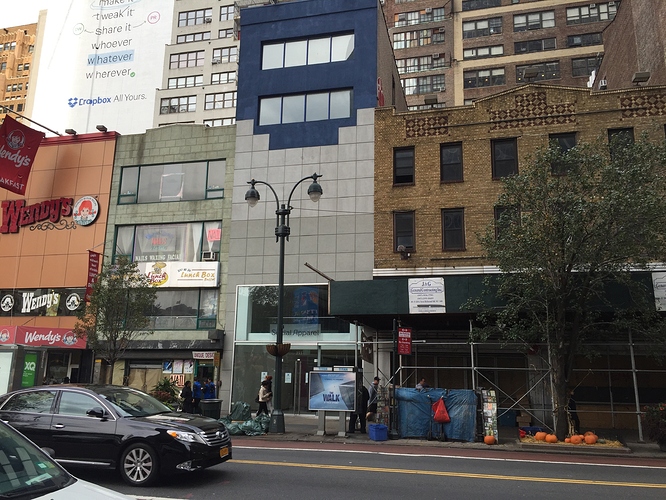 While The west side of the block is presently disgusting, the east side is quite nice. 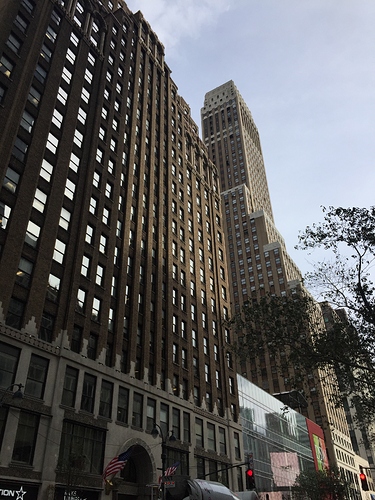 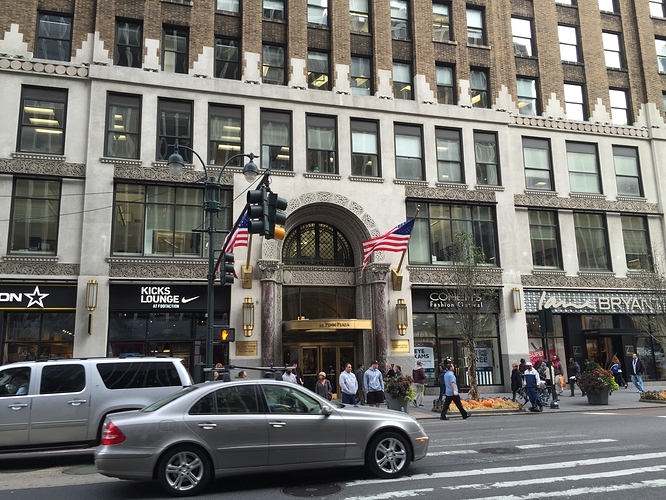 If they buy enough of those low rise properties, it could be a fairly decent tower. Glad they are cleaning up that area.

I’m pretty sure that Vornado owns almost all of them.

A huge tower will rise in time on the SE corner of 34th and 7th.

That would be fantastic!! Hopefully something supertall?? Anyways, Lets hope Chetrit decides to flip his lot.

That clown Antinimby is speaking about these sites with a feigned sense of knowledge, when, in reality, he comes to NY once a year to see Chippendales.

The site from a distance 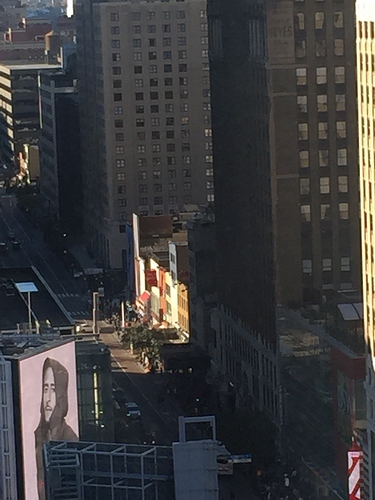 Vornado’s other site nearby at 7th and W 34th 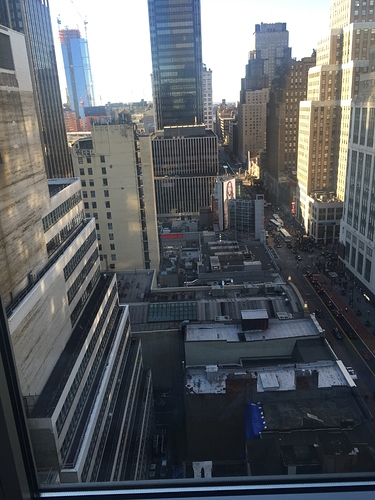 This heinous block should be quite nice when Vornado is done!

As noted, the eastern portion of the block is quite nice. It’s the western portion that’s lousy, but that clearly will change soon. 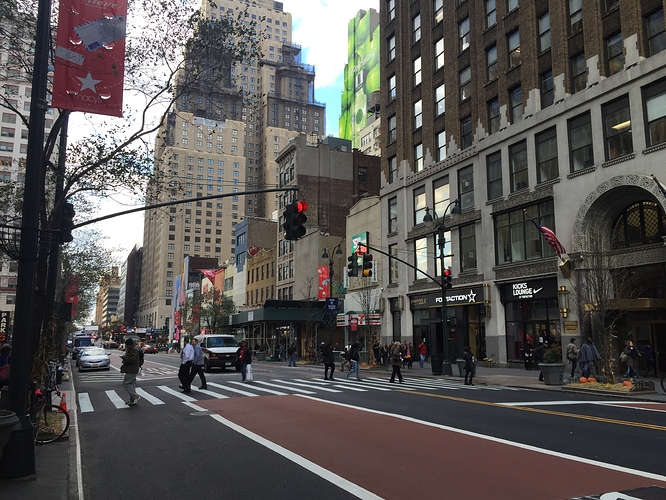 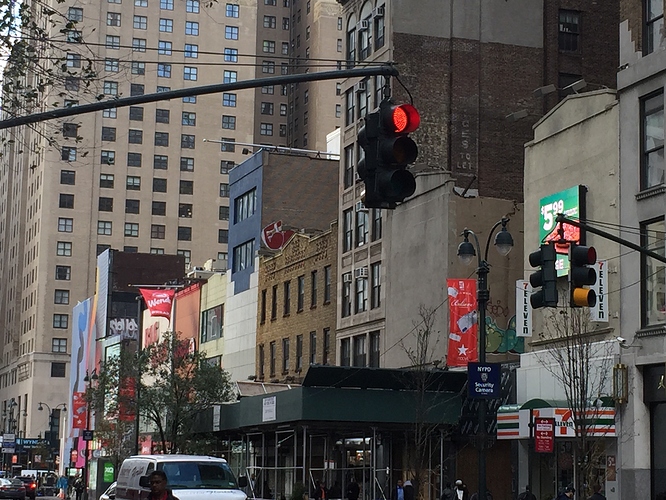 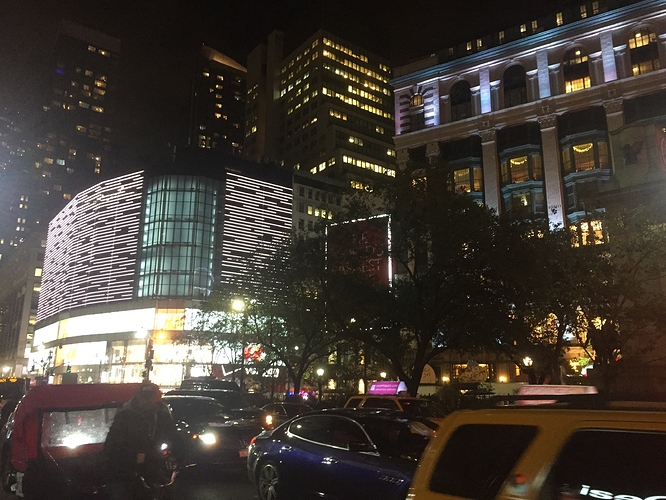 One of my favorite shopping areas. Has gone a long way. The addition of seating and plaza improvements really helped the area.

I agree. This area will become truly magnificent when MSG moves, but for now, Virnado is poised to clean up the two blighted corners.

This site is near the sleazy McDonalds at which that shooting recently occurred. I have read 8th Avenue from around 34th all the way to the UWS is not the greatest area.

Clean this up, Mr. Roth!

The McD is adjacent to Vornado’s properties. I suspect that Roth will acquire it.

8th Ave between 31st and 42nd has huge potential. There are really stunning old office towers there that simply need to be cleaned up!!

I assumed that Vornado was behind the LLCs buying this stuff. Apparently, not!

Virnado owns the corner property on 34th and 8th, and the two small structures just east of the corner building.

The next building (ie, the fourth one in from the corner of 8th Ave) housed the Bagman store, and its address is 261 W 34th St. It was recently sold to an LLC and is vacant. I assumed that Votnado bought it, but maybe Chetrit did, As he owns everything east of the Bagman (with the two exceptions noted below).

So far December has been a fruitful month for Joseph Chetrit and his family and friends.

In the past week, the Chetrit Group and its various joint venture partners closed $185 million in debt across two projects, Commercial Observer has learned.

Iron Hound Management Company brokered both transactions, which include a $115 million loan from Fortress Investment Group for a development in downtown Brooklyn and a $70 million loan from SL Green Realty Corp. on a row of empty retail shops on West 34th Street…

As for Chetrit’s latest development in Midtown Manhattan, the firm originally acquired a total of seven parcels from 245-261 West 34th Street in partnership with Cornell Realty Management in two separate transactions for a total of $31.5 million from discount retailer Conway Stores in January 2014.

The two firms are no longer developing the sites together and split the assets, Mr. Verrone of Iron Hound confirmed. Chetrit is using the proceeds of the loan to fund the predevelopment of 251-257 West 34th Street. The vacant retail stores will be demolished and replaced with a mixed-use retail and hotel project.

The two recent debt deals are part of a wave of financings the Chetrit Group has closed this month. On Dec. 7, the family-run real estate dynasty landed an $11 million construction loan from Puerto Rico-based Popular Community Bank to develop a multifamily rental building at 150-01 88th Avenue in Jamaica, Queens. Just across the street, the development firm is constructing a massive multifamily complex on the site of a former hospital.

This past summer, Chetrit and Clipper Equities took out a $345 million financing package—a $280 million senior loan led by Natixis Real Estate Capital and $65.5 million mezzanine loan from Apollo Commercial Real Estate Finance—for a condominium conversion in Gramercy Park. Chetrit is also working on a condo conversion of the Sony Building in Midtown.

Debt will be used for Chetrit and JDS resi project in Brooklyn, West 34th Street redevelopment

It’s been a busy holiday season for Joseph Chetrit, with the Chetrit Group and its partners closing $185 million in debt financing for two separate projects in the past week.

The deals include a $115 million floating-rate loan from Fortress Investment Group, which the Chetrit Group and Michael Stern’s JDS Development Group are using on two separate Downtown Brooklyn properties. They plan on both refinancing existing debt on the former Dime Savings Bank of New York, at 9 DeKalb Avenue, and funding their acquisition of an adjacent site at 340 Flatbush Avenue Extension, according to the New York Observer.

Chetrit and JDS acquired the former bank building from JPMorgan Chase for $90 million earlier this year. The two firms are expected to use the site’s 300,000 square feet of air rights to construct a residential skyscraper rising more than 1,000 feet at the neighboring 340 Flatbush Avenue Extension, which they partnered to buy for $43.5 million last year.

Chetrit also sealed a $70 million loan from SL Green Realty for a row of empty retail shops on West 34th Street in Midtown. The developer acquired the seven parcels, at 245-261 West 34th Street, in partnership with Cornell Realty Management, for a combined $31.5 million.

The Red Hook-based development and investment firm shelled out $20.5 million for a 6,418-square-foot retail property at 259 West 34th Street, according to Aron Taub of GFI Realty, who brokered the deal. The property comprises a total 21,690 buildable square feet, according to PropertyShark.

The building, which is currently occupied by a Wendy’s restaurant, has belonged to the Moran family since 1977, records show. The Morans used to operate an Irish bar at the location, known as the Blarney Stone.

Cornell and Chetrit previously filed plans to build a 17-story, mixed-use hotel property on the first site, at 245 West 34th Street last December. It’s not clear if they plan to scrap those plans in favor of one larger project or build two separate properties on the street.

Cornell is just one of several developers to look toward the Penn Station area for upside, especially in the wake of Vornado Realty Trust’s announcement earlier this year that it would invest hundreds of millions in new retail space, public plazas and other infrastructure in the area.

“The demand for hotel and retail along 34th Street is very strong,” Taub said. “There is very heavy pedestrian traffic there.”

This is the whole site. Vornado’s corner building is pictured on the left. It’s covered in colored billboards.

Virnado owns the two little buildings to the right.

It seems that Chetrit owns Bagman and everything to the right. 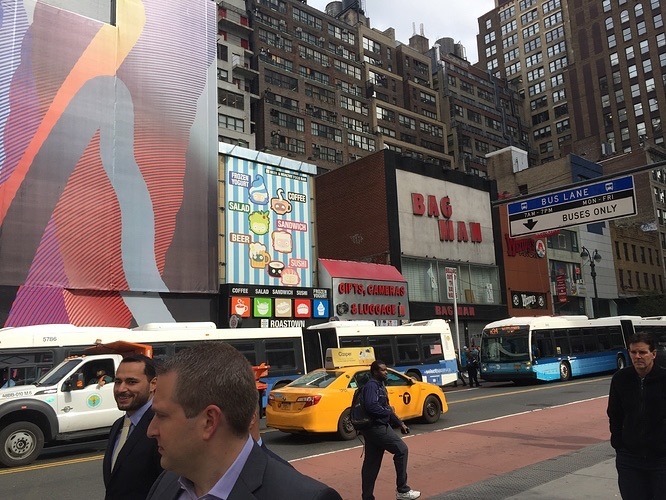 Given the booming tourism industry, I’d imagine a super tall that’s strictly a hotel would make sense. One that would rank as one of the worlds largest. Not a Vegas type, but in terms of a tower on such a footprint. A hotel with 1200-1500 units would be sweet. Maybe 1300 ft. Eh, might be getting wishful, but 34th Street, with MSG nearby would make sense as a hub for tourists and international visitors.

I don’t think it will be much taller than 500’. I’m just happy to see that junky block cleaned up.