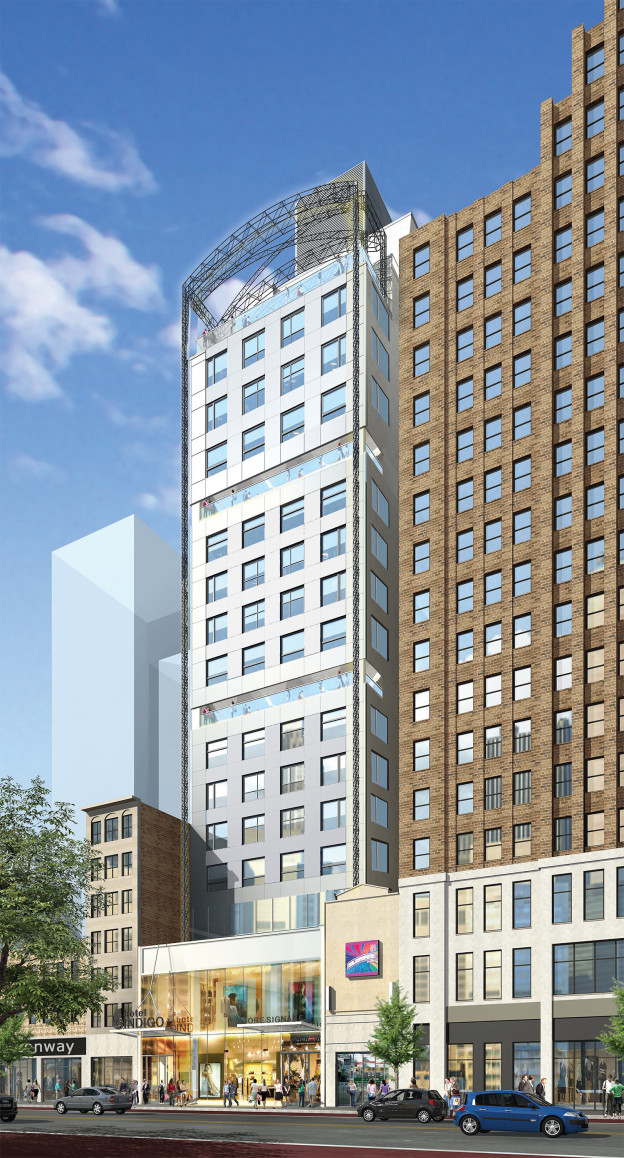 As YIMBY previously reported this past March, a new hotel will soon begin rising at 245 West 34th Street, in Midtown West. Since the initial post, a fire swept through the existing low-rise. But permits remain unchanged, and now we have the full reveal for the 17-story project, designed by Gene Kaufman.

The DOB indicates the plan exam is still in progress, though that is likely due to administrative overhead rather than any problems with the new building application, which lists the developer as Isaac Hager of Cornell Realty Construction. The building will have 8,257 square feet of retail, topped by 36,769 square feet of hotel space, divided amongst 180 rooms.

245 West 34th Street’s full rendering matches a snippet posted by Winick Earlier this year, and the project will offer a diminutive contribution to 34th Street, standing shorter than most buildings on the thoroughfare. The bulk of the tower’s massing is withdrawn from the sidewalk, degrading the street-wall, and the cladding will be similarly unappealing. Nothing about this should be surprising for those who follow hotel development in New York City, where new additions to the market, especially below nosebleed price-points, are almost always prone to severe value-engineering.

At the very least, a touch of lattice-work offers a non-offensive element of flair atop the roof, and the overall appearance could be significantly worse. Pending the resolution of demolition, 245-247 West 34th Street is on track for a 2016 completion date.

Too bad they couldn’t get that heinous 7-11.

Luckily this Kaufman still seems dead in the water.

It’s a shame that the two crappy buildings are holding out.

Any equipment on-site or any workers on-site?