The first rendering is up for a new residential building in Midtown East, which will have an ‘official’ address of 235 East 44th Street. Excavation is nearing completion, and the tower is about to start rising; Gerner Kronick + Valcarcel is the architect of record. Previous reports indicated the country of Senegal was behind the project, but recent DOB filings indicate that Adam Gordon is now the developer.

Permits indicate 235 East 44th Street will stand 21 stories and 272 feet tall, with 71,914 square feet divided between twelve ‘dwelling units,’ language not typically used in association with commercial structures. The Schedule A adds even more confusion, with the entirety of the building divided between various office amenities, including ‘Class B rooms’ and ‘accessory lounges.’

Regardless of the filings, the tower will apparently be split between residences and office space. Renderings are not all-encompassing, and only give a peek at the new tower’s lower levels. Still — if the facade is any indication — the bulk of the project appears to be residential, and units will likely average approximately 5,000 square feet each.

Senegal bought the property for $23.9 million in 2009, and after several years of hold-ups, construction is finally getting underway — though exact details remain murky, with Adam Gordon apparently taking the lead this past March.

The site’s former structure was subject to radioactive contamination. Per The New York Times, 235 East 44th Street “was occupied from 1939 to 1944 by the Radium Chemical Company, a family-owned radium supplier,” but after scrutiny, the property was cleaned up in the early 1990s.

Completion of the new building is expected in the spring of 2015.

After a partial reveal via an on-site rendering posted two weeks ago, a tipster submitted a complete version of the design for 235 East 44th Street, in Midtown East. The site’s architect is Gerner Kronick + Valcarcel, and Adam Gordon of Pride Builders is the developer.

While permits are slightly confusing — indicating a mix of office condominiums and apartments – the tipster also confirms that the bulk of the structure will be condominiums, with only the first two floors dedicated to office space. Contrary to what the DOB filings indicate, the building will stand 19 stories tall, which the above rendering would corroborate. The total scope is slightly over 70,000 square feet.

Given the seemingly dated DOB filings, plans for 235 East 44th Street have evidently undergone changes. Whether the building will still be divided between twelve units remains to be seen, but given the surrounding neighborhood — which does not merit super-luxury developments, or expansive floor-plans – it would seem unlikely.

Design-wise, the project will be indistinct; at only 19 stories, the structure will be invisible on the overall skyline, and the glassy facade is fairly nondescript. At the very least, it will enhance the block’s street-wall, especially when combined with the new Even Hotel rising just to the west, at 219 East 44th Street. 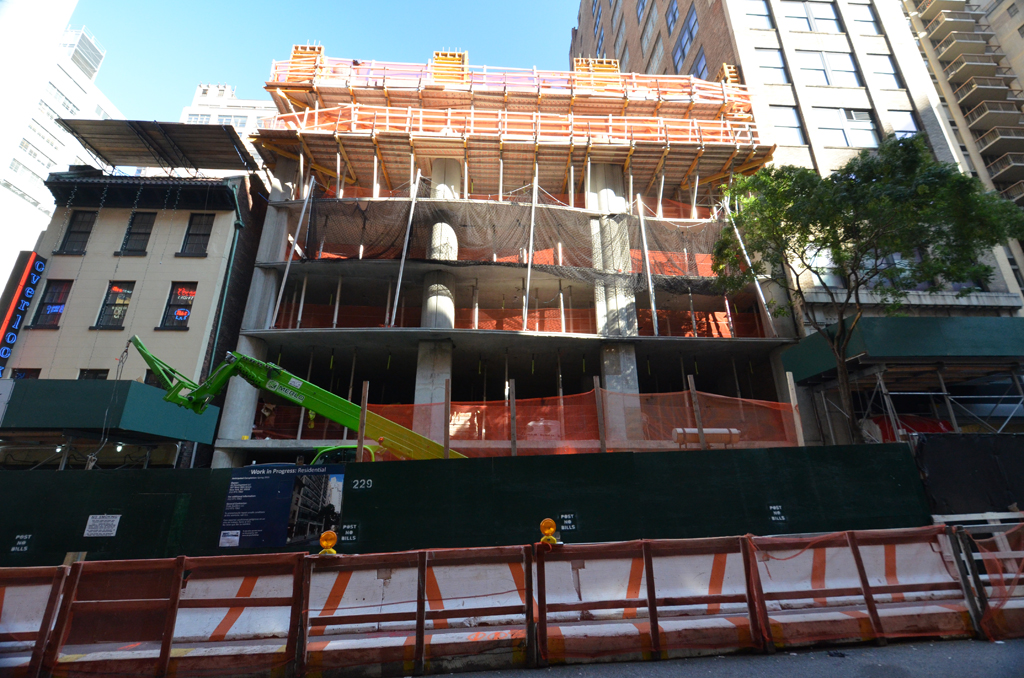