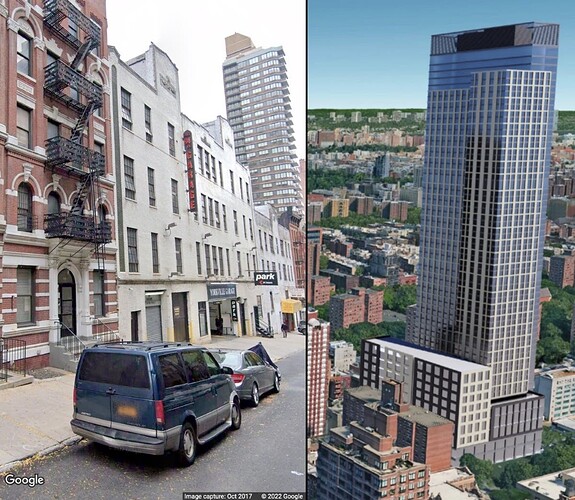 A developer wants to construct a 500-unit apartment tower on a midblock Yorkville site, potentially triggering another rezoning battle.

A developer wants to rezone a low-rise Yorkville block to build a 46-story, midblock apartment tower, according to newly revealed plans — setting the stage for what could be another lengthy land use battle.

The rezoning would center on 221-243 East 94th St.: a site between Second and Third avenues that is currently home to two parking garages, an auto repair shop and a vacant five-story apartment building.

They would be demolished and replaced with a 46-story, 484-foot-tall apartment tower containing roughly 500 apartments, including up to 150 affordable units, according to a document posted on a City Planning website last week.

To construct the new tower, developers must get permission to change the block’s current industrial zoning code to a new scheme that allows for dense residential and commercial use.

That will trigger ULURP review, which entails input from the community board and a final vote by the City Council. The 94th Street rezoning has not yet been certified, so the clock has not begun ticking on the roughly seven-month-long process.

Spanning a combined 456,000 square feet, the new tower would be enlarged through air rights from a few adjacent lots on the same block, which would also be rezoned, according to the planning document.

Renderings of the tower depict it soaring above Yorkville’s other high-rises, including the Ruppert Towers complex a few blocks south. A ground-level image depicts a brick facade and large windows, designed by Hill West Architects — the same firm behind other high-rise towers planned in the neighborhood.

The tower would sit atop a four-story base, rising to six stories along with the upward slope of the block’s western side. Its affordable apartments would be open to those making an average of 60 percent of the area median income — or $56,000 for one person — including nearly half listed at 40 percent AMI.

Another 24,700 square feet of space would consist of ground-floor retail and an unspecified “community facility,” according to plans.

Construction of the new tower would take two years and could wrap up by 2024, according to the planning documents.

Its ultimate fate could lie in the hands of Julie Menin, the City Councilmember who represents the project site and could likely influence her colleagues when it comes to a final vote.

Menin strongly opposed the Blood Center rezoning before being elected to the Council. Her office did not immediately respond to a request for comment on the 94th Street rezoning.

If built, the 484-foot-tall tower would rank among the tallest buildings on the Upper East Side. Plans for the 94th Street rezoning are emerging just days after Patch reported that the Naftali Group intends to build a 535-foot-tall apartment tower on Second Avenue and East 77th Street — likely setting a record for the neighborhood’s tallest building. 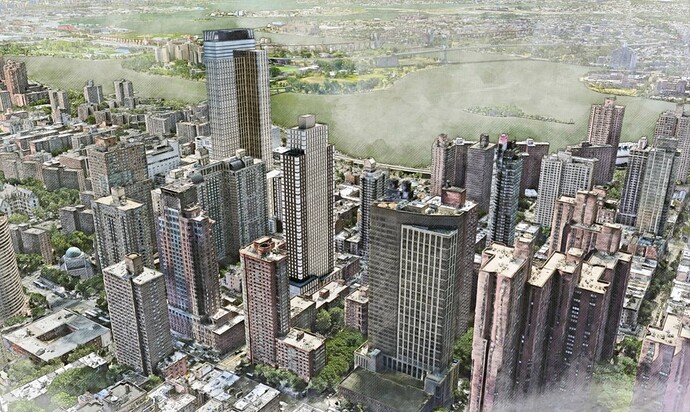 The community board is gonna have a stroke over this. The Upper East Side, East Harlem, Yorkville (although in UES) needs density. The skyline needs to extend all the way uptown, I’ve been saying that for years. 46 stories is great. We need some more 60fl+ in the area. There is a DEMAND for housing. I want to see the skyline SATURATED with skyscrapers. 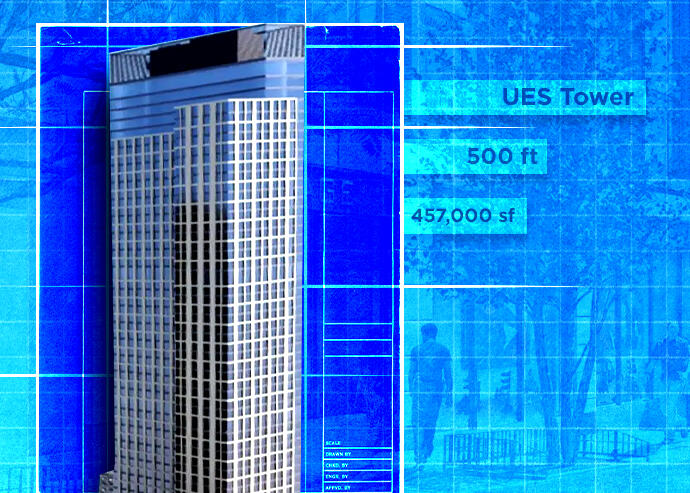 The Chapman Group wants to rezone a site in Yorkville to allow for a 500-unit, 46-story residential tower at 221-243 East 94th Street.

There’s also the outstanding proposal two blocks up next to the Hospital that was supposed to be even taller. I think that was held up by some state vs city trifling over what is a park versus a playground. Not sure what happened from there, but that was back under Cuomo.

edit: actually, that proposal is the taller building in the renderings. This one is the smaller tower. 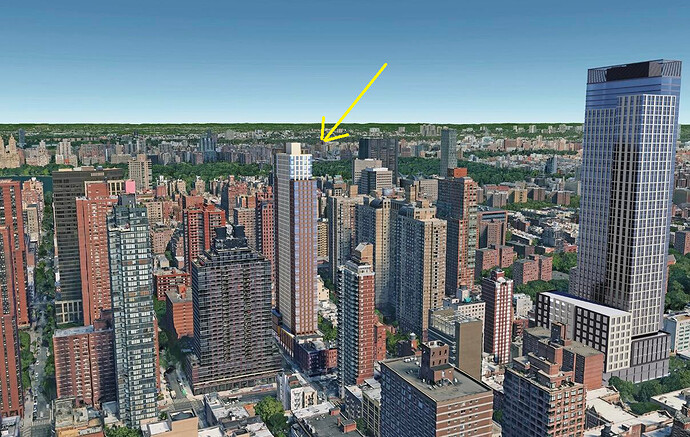 I think that proposal went stale.

Bless their soul. You have to be a brave _____ to seek a rezoning in that area.

Yeah I know which ones he’s referring to, yes, its stale. The absurdity of it all, trying to keep an empty lot with dying vegetation and a chain link fence. So yes, brave person indeed for seeking a zoning change in the general area.

Yup, that was an East Harlem lot @chris08876 . When the Second Avenue subway is pushed in, I hope it encourages that proposal to go through, and hopefully they can upzone the entirety of the East Harlem (up to 125th) to UES zoning.

As for this one, the neighborhood is going to go crazy ballistic. I don’t think it’ll remain the height it is. It’ll be downsized definitely.

Yeah the 2nd Avenue will definitely encourage some development. A lot like that, something eventually will rise. I just wish though that the officials in Harlem in general see the vision and the opportunity. The One45 debacle as a case study.

As soon as you hit the 60s and above towards upper Manhattan, (from both the west and east sides), they’re so NIMBY. I wish I knew why. No other neighborhood in any of the boroughs are as NIMBY as upper Manhattan and the two sides. Maybe Astoria. But that’s it.

My take on this has always been about units. In theory, I am fine with a height chop but what I don’t like are when they chop the amount of units. If say the difference is between 400 to 500 ft, and say going for 400 ft but keeping the units the same… ok… ok… I can do with that, but if we are talking a 30-40% reduction in functionality, at that point, that is squandered potential and the real travesty.

With the 2nd Ave line, tons of potential for much needed housing. And in general most of Harlem is ripe for upzoning. As we’ve seen in portions of Queens, when the zoning changes occur, real potential rises. City will benefit in the long run with the needed housing and neighborhood revitalization. Speaking in general here but the concept remains the same.