The beige building depicted in the middle of the rendering above could be constructed on West 79th street.

A five-story building on West 79th street between Amsterdam and Broadway could be demolished and replaced with a 16-story apartment building if the owners get permission from the Landmark Preservation Commission. The brick building currently on the site (see photo at bottom) has residential and commercial tenants, including Tower Cleaners and A Select Few antiques.

A tipster tells us the residents of the building have already been told they have 90 days to vacate. According to Streeteasy, the building currently appears to be filled with rental apartments that go for about $2,000 for a studio to $3,700 for a two-bedroom. It was sold in February.

The building on the site was once part of a series of rowhouses, as depicted in the photo at left. But it was altered in the 1970′s and is now called Carlton House, according to the landmarks application made by the developer (posted below).

The location is part of the Upper West Side – Central Park West Historic District, which was designated in 1990. The building sits next to the Hotel Lucerne, a landmarked hotel built in in 1904 (learn more about the Lucerne here). Nice Matin restaurant is on the ground floor of the Lucerne.

The new building would block the West-facing windows of the hotel, which could be a sticking point, Landmark West noted. Morris Adjmi is the listed architect.

The application is set to be discussed in a public hearing at the Community Board 7 landmarks committee on July 10 at 6:30 p.m. on the second floor of 250 West 87th street. According to the presentation below, the Landmarks Preservation Commission meeting is scheduled to be held on July 22.

This is one of four buildings set to be demolished soon and replaced with luxury housing in a four-block radius, including two on West 77th street and one on West 80th and Broadway.

In Context or Out of Step?

Left, in the 1970s, a low-rise apartment building took the place of rowhouses on the north side of West 79th Street between Amsterdam and Broadway. Right, the south side of the same block is still fairly intact.

On West 79th Street from Amsterdam Avenue to Broadway is a remarkable holdover from the late 19th century, two facing rows of townhouses on a wide street. In the Upper West Side/Central Park West Historic District, the buildings are almost intact, although four were replaced in the 1970s with a homely apartment house of the same height, 203-209 West 79th.

Now the owner of the sour-looking interloper, Anbau Enterprises, proposes to demolish it and build new residences on this unusual block — residences as in a 16-story apartment house. The proposal is now before the Landmarks Preservation Commission.

The new apartment building’s cement superstructure is now well out of the ground.

Great to see this u/c. Moved. 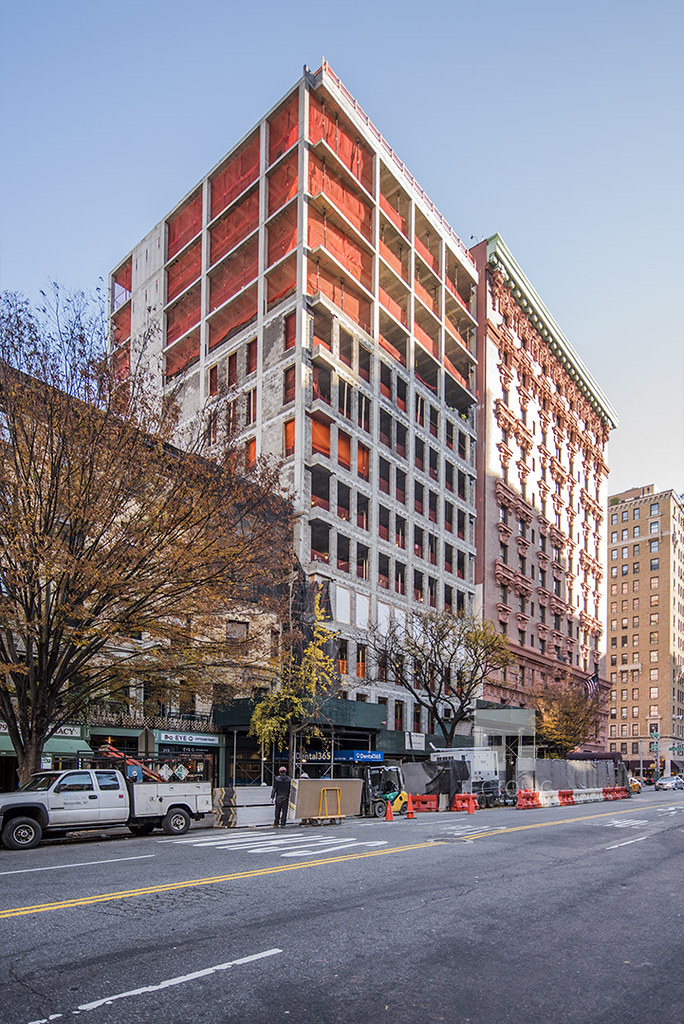 CMU work is almost complete and scaffolding for facade work is now up.

Front facade masonry is about half installed. It’s hard to get the details through the scaffolding but I managed to get one shot that gives a clue about the eventual appearance. Not bad.

It looks great. I love the UWS.

Here are two more facade images. It’s a pretty good building. Certainly not boring when you are close enough to pick up the details on the verticals between the windows. Certainly better than the other new one nearby at 80th and Broadway.

Scaffolding is down except for the bottom floor so we finally can see what the building looks like. It’s a bit more interesting up close than at a distance. But the corner treatment and stone work look nice in tight. All in all it’s pretty good.