New renderings have been revealed for Property Markets Group‘s 23-10 Queens Plaza South, a mixed-use addition to the booming market in Long Island City’s Court Square neighborhood. The tower will stand 44 floors, and the existing warehouse will be converted to parking and loft office space. Permits for construction were filed late last year, indicating a height of 481 feet, and a total of 391 apartments.

SLCE is the architect of record. Whether the released image is final remains to be seen, but in Court Square’s case, the vertical profile of 23-10 Queens Plaza South is less concerning than the creation of an actual neighborhood.

At the very least, the preservation of the existing industrial space will allow the tower to engage with the street in a way that’s atypical for new construction in Long Island City, as few buildings incorporate legacy structures. While PMG’s project may not add retail — key to creating areas that thrive 24/7 — at least the site will be mixed-use, and 30,000 square feet of commercial ‘loft’ space is sure to be attractive.

Construction is beginning this month, and the entirety of the project will measure nearly 340,000 square feet. Plans have apparently undergone changes since PMG’s acquisition was first revealed late last year, as initial reports were that the development would be residential-only, and that the old warehouse would be razed.

Given that work is now beginning, completion is likely before 2017.

Work is chugging along at 23-01 42nd Road. Excavation has completed, and now the foundation is coming in, with rebar rising from the ground as seen in the photos below. According to the permits, which were approved in February, the building will rise to be 44 floors featuring 306,446 square feet of residential space and 30,650 square feet of commercial space. Delivery is expected in Fall, 2015 according to the rendering.

This only makes me long for the Silvercup Towers.

This only makes me long for the Silvercup Towers.

It’s only a matter of time, my friend!

Those were fantastic proposals. Delayed but surely not denied, though the design will likely be different.

The LIC boom is just beginning to get off the ground, and as it gains momentum, we will see more iconic architecture start to fill in. Just give it time. 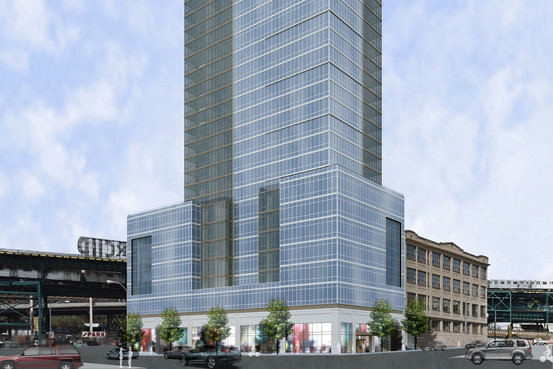 A roundup of commercial property news from across the tri-state region.

Left of One Court Square JC_Heights you deserve a medal for all of the project coverage. Very nice. COvering all of Manhattan and a lot of Queens. Thats a lot of walking.

Reminds me when I spend 13 hours walking around trying to cover every project out there. By the end of the day, I was pretty sore.

Thanks! 13 hours would kill me. Haha. I walked around lic and hudson yards in like 2.5 hours and walked almost 6 miles. My feet were pretty tired.

Did the same yesterday.