The Poon-designed 136 West 42nd Street has been topped-out for over a month, so it’s no surprise that cladding has finally begun to rise. What is unexpected is the quality of the facade – and not in a good way. The glass looks to exude an awkward cerulean hue, perhaps befitting of a new tower in Miami or Vancouver, but extremely out-of-place in New York City. Especially disheartening is the tower’s context, as it sits between the Bush Tower and the old Knickerbocker Hotel; two pre-war gems that do not deserve a glaringly garish 37-story skyscraper next door.

While 136 West 42nd Street’s form is fine enough, the cladding was what would make or break the tower in terms of aesthetics – and it does seem that the facade will be bad enough to make the building fall short of the ‘adequate’ category. The architectural malaise that has begun running rampant in Chelsea and The Garment District has clearly spread, and though the 42nd Street corridor is no shining example of beauty, it deserves better than 136 West 42nd’s mediocre design. The tower’s glass is made more awkward by interspersed white accents, which give an aura of confusion and disarray to the already tacky exterior.

Completion of 136 West 42nd Street, which will be occupied by a Hilton Garden Inn, is expected in 2014, and the tower will yield a total of 282 hotel rooms. Whether the tourists care about the lackluster appearance remains to be seen – and they probably won’t, because the bottom-line for these new hotels is demand and not aesthetics – but it’s clear that Midtown Manhattan has received yet another visually unappealing new building.

This is complete. The hotel opened in September 2014. 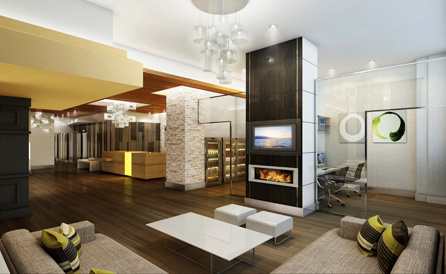