"As part of the city’s sweeping plan to close its troubled Rikers Island jail facility, a nine-story government building at 80 Centre Street would be gutted and replaced with a new detention center that could rise as high as 40 stories, the Mayor’s Office said. " 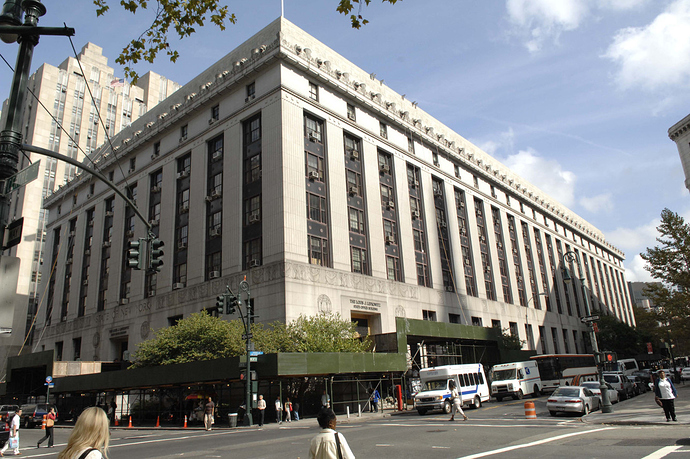 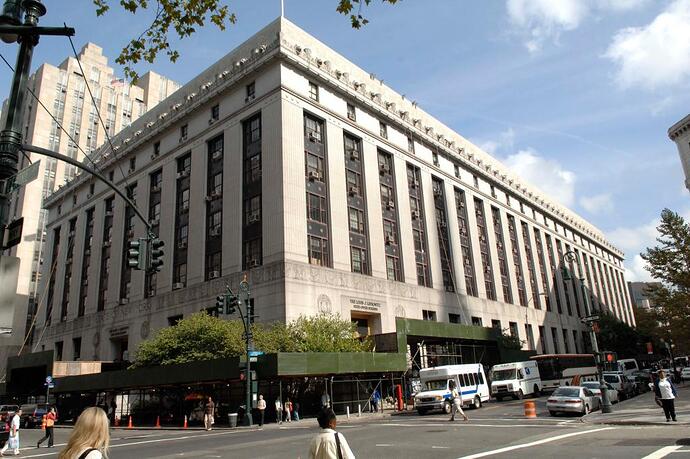 The de Blasio administration is considering building a high-rise jail complex in the heart of Lower Manhattan, city officials confirmed Thursday. As part of the city’s sweeping plan to close its tr…

Affordable Housing is also being talked about. From NY Daily News:

“Today, we are presented with an opportunity to take the rest of that land back to create more affordable housing, cultural amenities and much needed parking for Chinatown,” Chin said in statement. “We must maximize this opportunity by ensuring that all voices are heard as part of this process.” 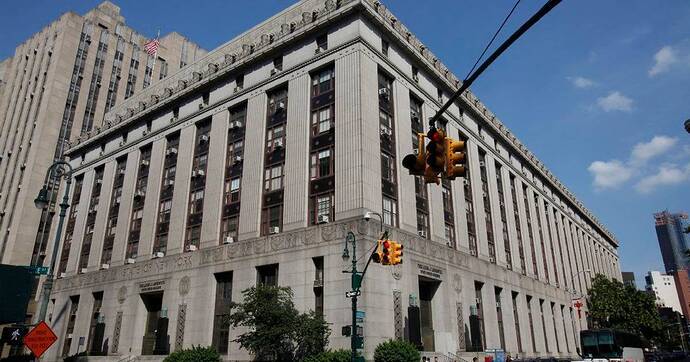 The de Blasio administration is considering converting 80 Centre St. – which houses the city’s marriage bureau – into a massive state-of-the-art jail, the Daily News has learned.

Maybe will get out own Peach Trees!!! (from Judge Dredd)

Seriously though, the higher levels of the buildings in the administrative district have great views.

I don’t know why this reminded me but there’s an empty lot a fair distance from here at Chambers and Elk that needs to be redeveloped. It’s an eyesore. It has been empty for 47 years, or at least since they demolished that old 1870s building that was there in 1971. 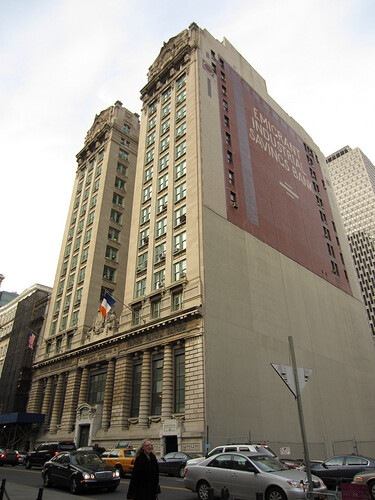 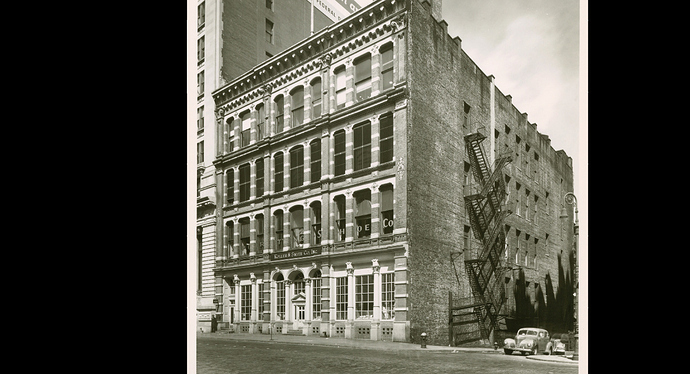 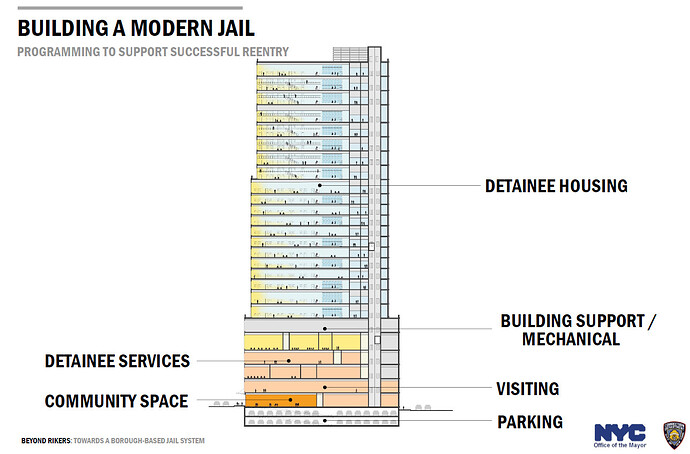 A crew of city employees from across three agencies came to CB1 this week to defend the mayor’s plan for a 500-foot jail tower on White Street, and in my mind, left a few key questions unanswered. The city has changed its mind on the location twice, but now seems set on demolishing the Tombs at 125 White as well as 124 White in order to build one giant detention center to hold 1,500 prisoners. The construction would also erase that easternmost piece of White Street when the building is constructed right over it. Here’s my attempt at a summary of a huge and complex issue for the city and the area, or you can read the presentation here for yourself: 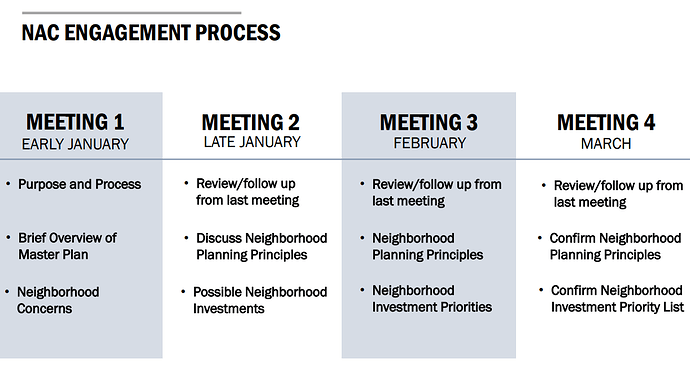 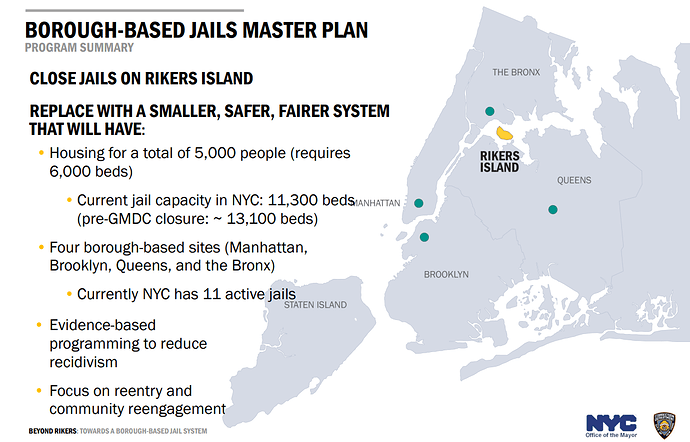 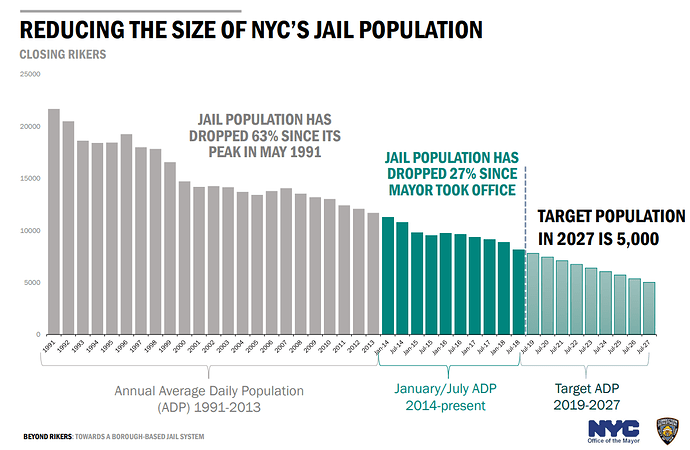 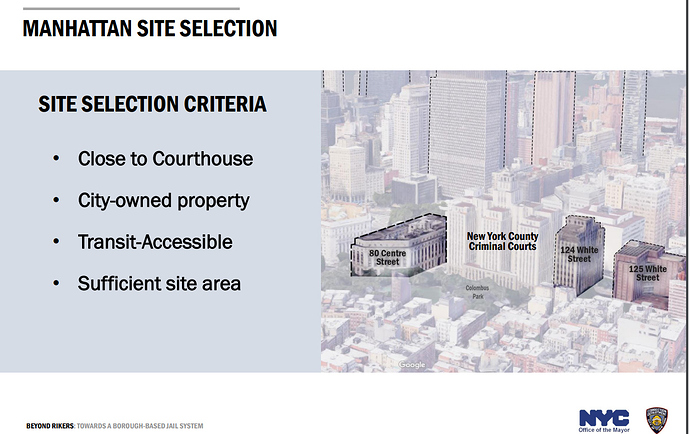 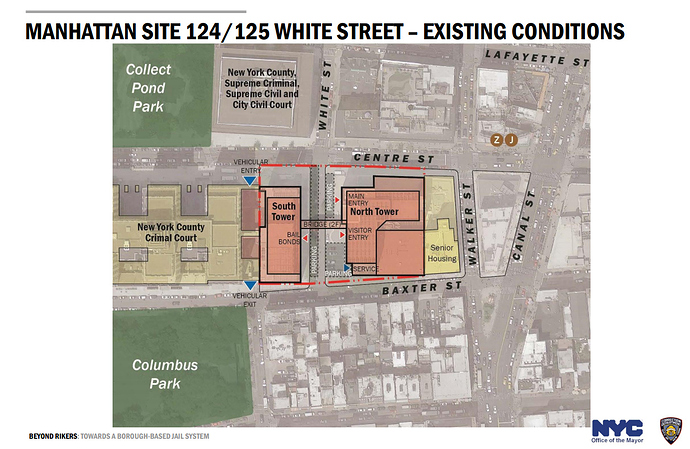 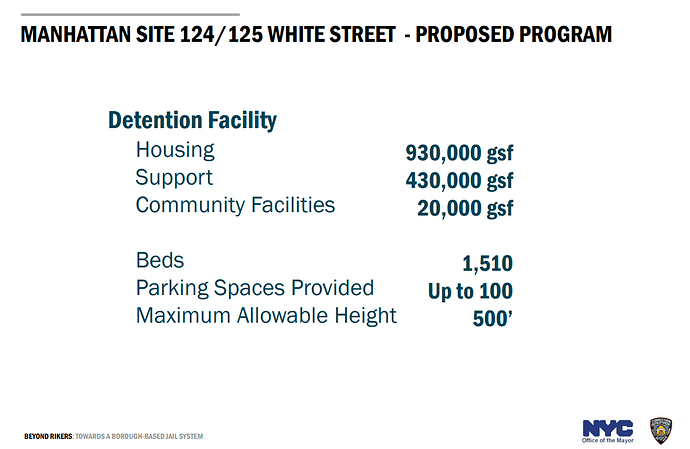 Changed the title. Let’s keep the Manhattan jail site within the same thread. As info comes, we’ll update the thread to include the extra sites. Treat it as a gen development. 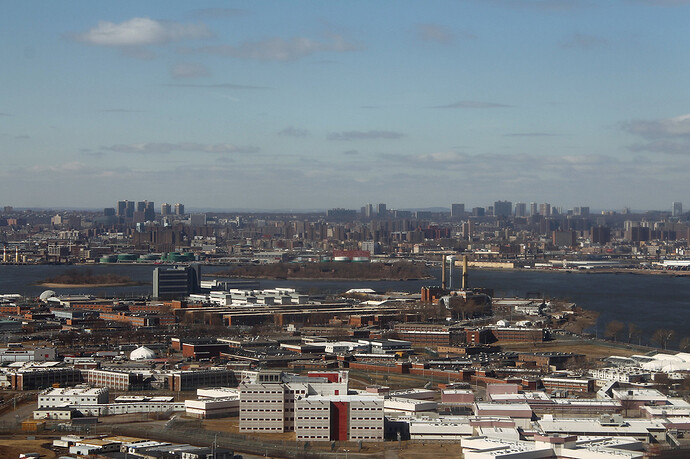 Make an Egyptian Revival skyscraper in the spirit of the tombs: 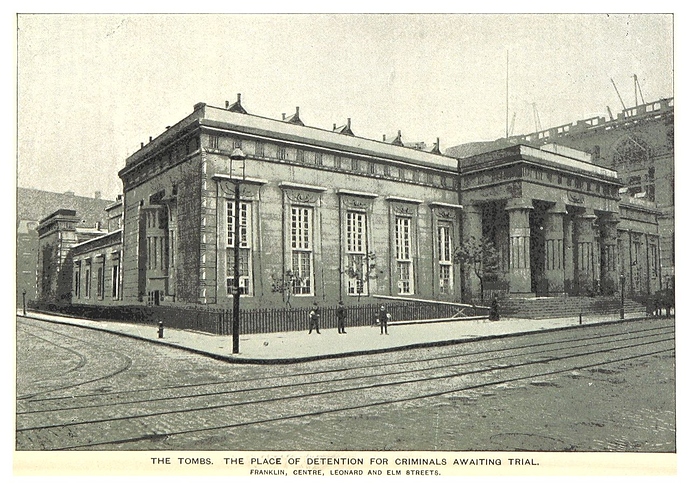 There’s no way this is being cancelled with the clock ticking on Rikers. 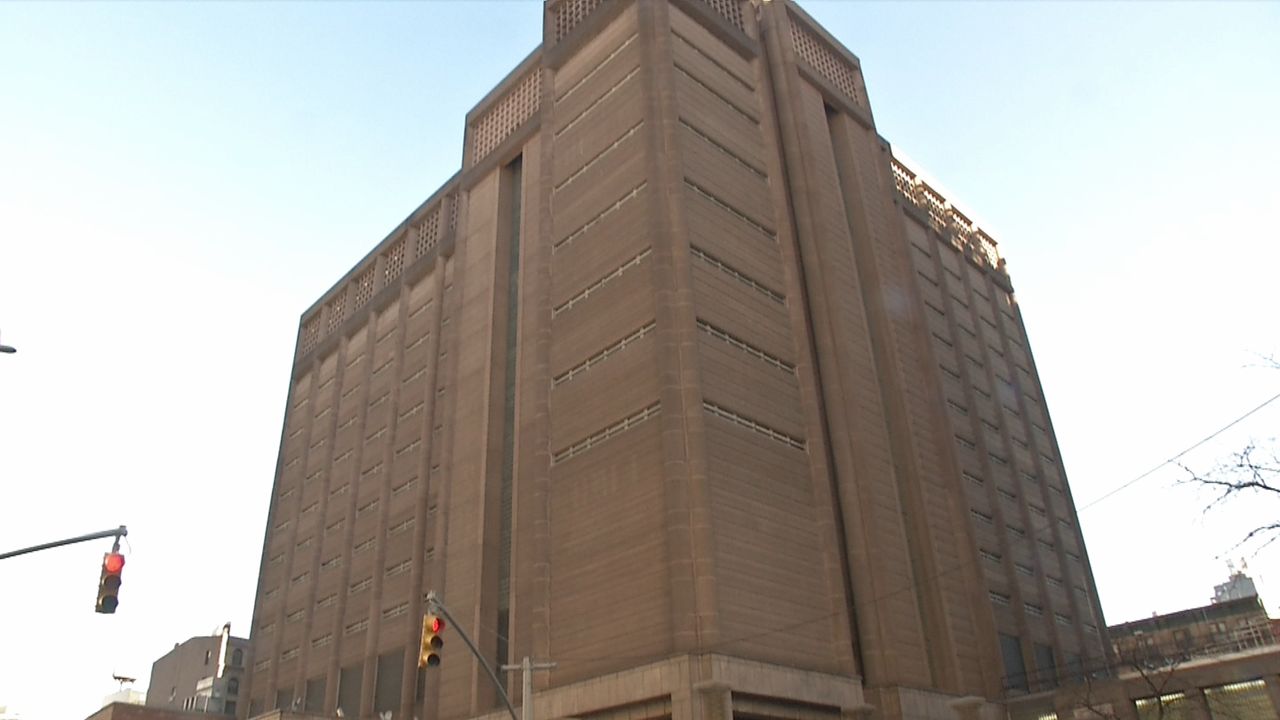 State Supreme Court Judge John Kelley ruled Monday in favor of Neighbors United Below Canal and other community groups that sued over the plan.

In the ruling, Kelley based the decision on complaints that the City Council ignored correct procedure and failed to get impact studies and approvals for a plan that was still being formulated. 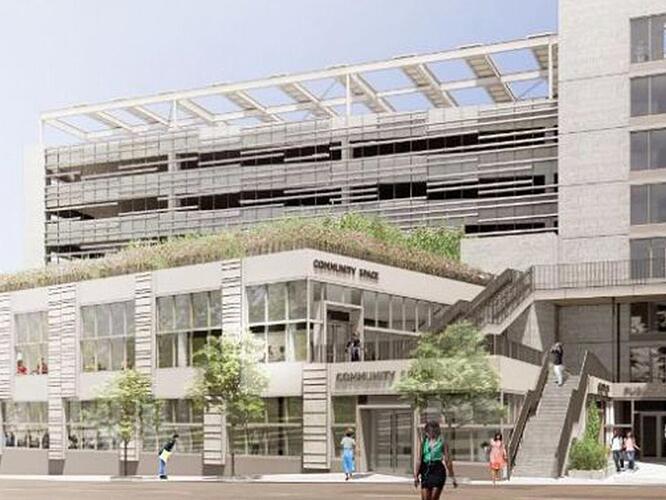 The NYC Department of Design and Construction (DDC) announced today that it has selected four separate teams of designers and builders to receive design-build contracts to prepare the sites where four new borough-based jail facilities will be constructed in Manhattan, Queens, Brooklyn and the Bronx.

A fifth new contract has been awarded through the City’s regular competitive bidding process for infrastructure work at the Queens site.

Major construction in the Borough-Based Jails program began in June in Kew Gardens, Queens, where a new garage and community space is being constructed adjacent to the site of a future new jail. 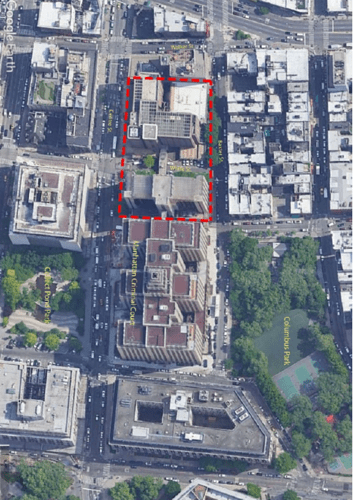 The city has hired a contractor to dismantle the two jails on White, with work to start in March.

Well, demolition is beginning. The worlds tallest jail - 30 stories - will replace 125 White St, colloquially known as “The Tombs”… Hopefully it turns out to be a nice looking building for a bad bunch of people. I believe it was originally proposed to be 45 stories.