Besides living, shopping and parking spaces, there is an option for commercial space.

[quote]
[…]
The New Rochelle City Council unanimously chose MacQuesten Development LLC, based in Mount Vernon, to build 282 residential units, about 9,500 square feet of retail space, a four-story parking garage and an option for 50,000 square feet of office space at 45 Harrison St., the site where New Rochelle Fire Station No.1 is now located.
[…]
The $110 million, 27-story building will require the relocation of the fire station to a new site. MacQuesten said it intends to start construction on the new building while keeping the original station fully operational.
[…][/quote]

looks like this grew a floor. MacQuesten is aiming to start work this summer.

Yeah, I was on their site the other day trying to find more information. I’m inclined to agree with the developer since it’s going to be their building, but they’re the only source claiming it’s going to be 28 stories, everywhere else it’s 27.

With regards to current project status, not much has changed since last month. The city signed off on a land disposition and development agreement (LDDA) in October’s council meeting regarding the project. More details can be found here, see page 36 and beyond. The next step is to decide whether City Hall will be relocated to this proposed tower, which is entirely up to the council of course. They have until the end of the year to decide unless they agree on an extension.

EDIT: Just realized I never shared these here. I was provided these high quality renderings a while back by the City Manager. Take a look. Feel free to use these for the main post. 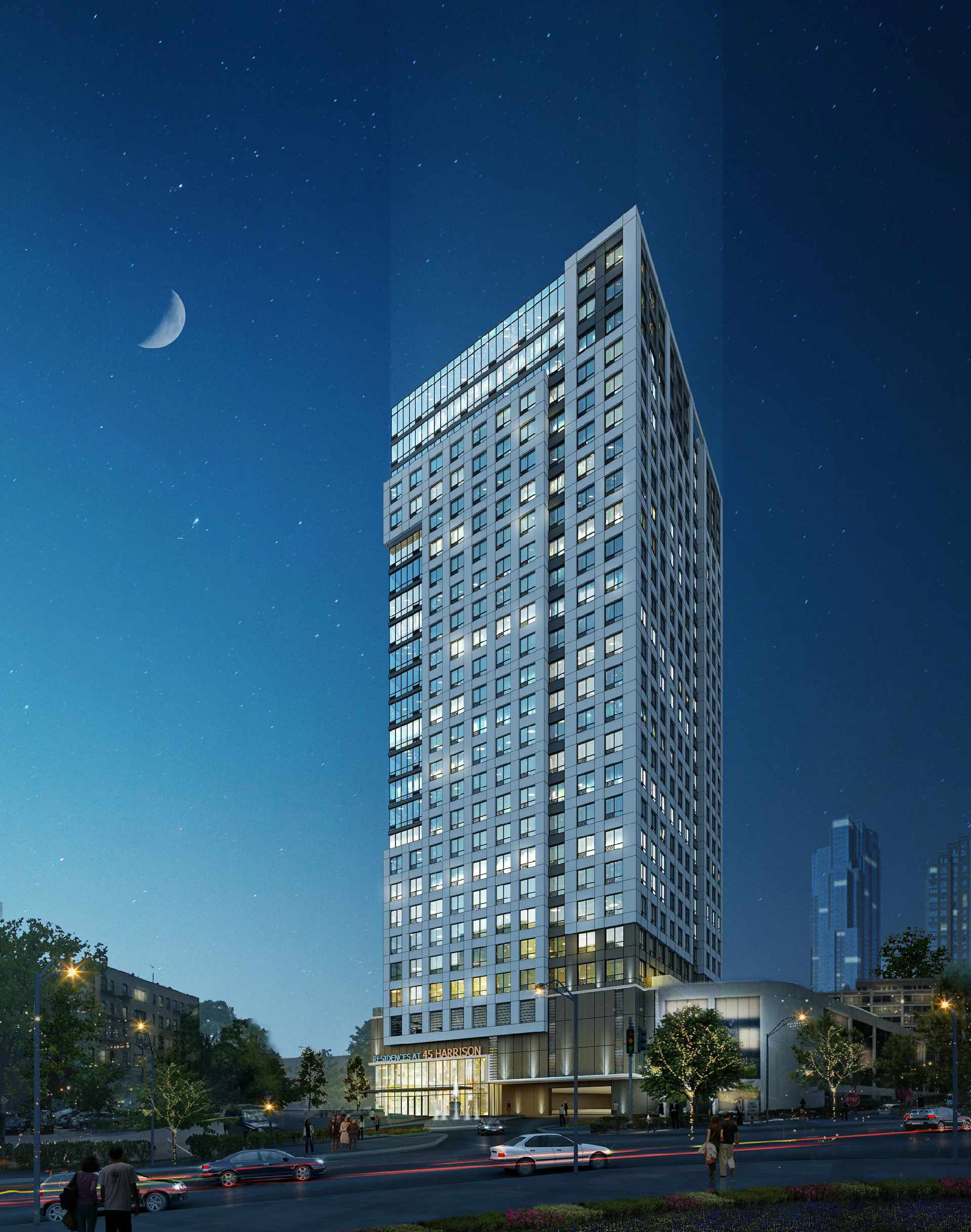 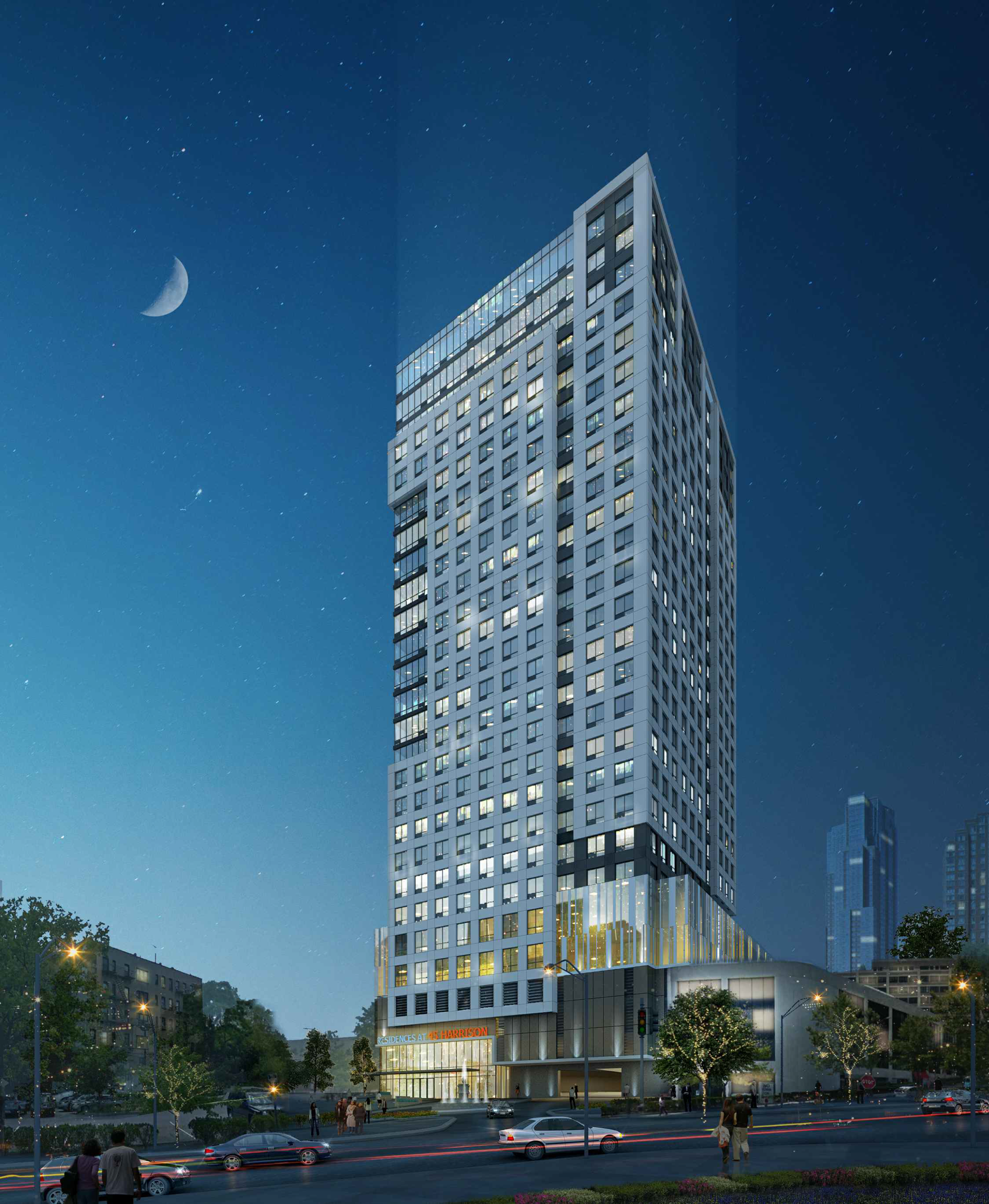 At his State of the City speech on March 1, Mayor Noam Bramson announced the move of City Hall offices back downtown, from 515 North Avenue to 45 Harrison Street, the current site of Fire Station #1 and the future home of MacQuesten Development’s $110 million mixed-use development.

The City’s new municipal office complex will be built at the base of MacQuesten’s Harrison Street tower, located between Main and Huguenot Streets at the City’s eastern gateway. With this move, employees, residents and visitors alike will be brought closer to shops, restaurants, green space and transportation, creating a more robust daytime office population and bolstering downtown activity- all while saving tax dollars.

Following the move- anticipated for 2021- the City School District will take over the entire current City Hall building, allowing for more classrooms, administrative and programming space at a much lower capital expense than new construction.

“The relocation of City Hall to downtown New Rochelle is a win-win-win for our economy, for our City, and for our schools,” said Mayor Noam Bramson. “This public-private partnership holds so much promise, complementing our downtown redevelopment while benefiting both our school community and taxpayers.”

“We’re thrilled that the move of City Hall will be part of New Rochelle’s downtown revitalization,” said City Manager Chuck Strome. “As our staff works to ensure a seamless transition, we look forward to providing New Rochelle residents with the same excellent City services more conveniently and efficiently.”

“MacQuesten is honored to be selected as the designated developer of the new City Hall complex,” said Joe Apicella, Managing Director at MacQuesten Development. “This building will pay homage to the great history that is New Rochelle while providing a state of the art “world class facility” for doing the people’s business while continuing to provide excellent services to its residents. It is our goal to build a building that is sustainable and user-friendly while utilizing green technology. We are committed to completing this project on time and on budget.”

45 Harrison Street. This 27-story tower with 238 apartments from MacQuesten Development will include the off-site creation of a brand new, modern fire station to serve our growing city. It’s a complicated project 10 with a lot of moving pieces, but we hope to have it fully approved by the end of this year.

Let’s bring the title down to 27 stories again

came across this on a google search. New design, or non-chosen proposal? 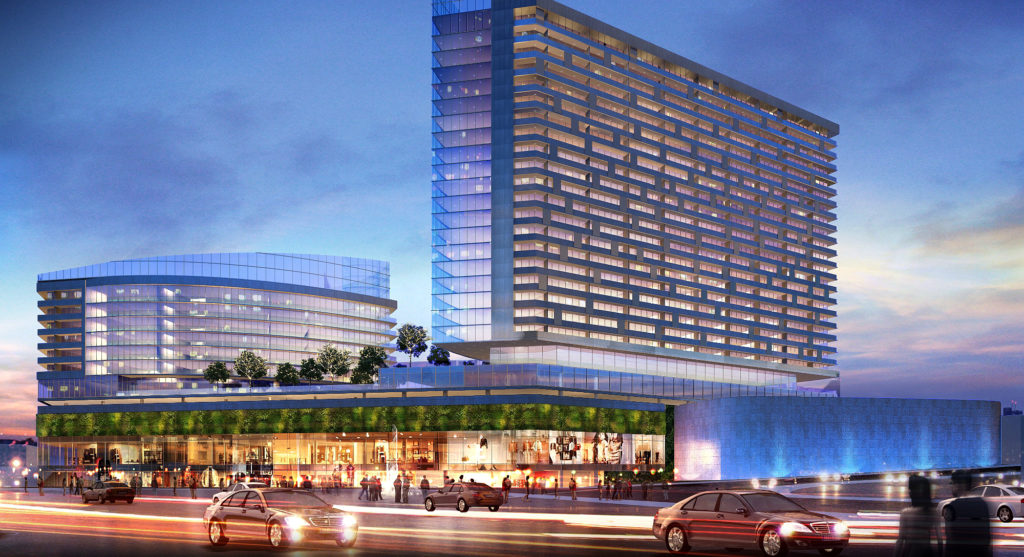 Looks like it was one of the finalist proposals that were shown at a council meeting. I’ve never seen these renderings, though, so that’s a nice addition. As far as I know, Macquesten is still the selected developer… would be nice to hear some news about the project though.

Great news - this project is still alive, albeit very quietly. The NR City Council will hold a special meeting June 3rd regarding an assembly and senate vote on signing over the Cedar Street extension over to the city so they can move forward with the project properly.

TITLE OF BILL: An act to authorize the commissioner of general services to transfer and convey certain state land to the city of New Rochelle

PURPOSE OR GENERAL IDEA OF BILL: Provides the authorization to the Commissioner of General Services (OGS)to do all things necessary to convey the state land located at Cedar Street Southbound Extension, New Rochelle, in the County of Westchester to the City of New Rochelle.

JUSTIFICATION: Cedar Street in downtown New Rochelle, between Huguenot Street and Harrison Street was built for an era that no longer exists. That era is one that revolved solely around motor vehicles as a means to get around. That is not the reality for downtown right now, or in the future. New Rochelle is in the process of transforming its downtown into a vibrant city that will be dominated by pedestrians, mass-transit (both local and regional) and other means.

The four lane, one-way road serves a small number of vehicles each day. By closing this roadway, these vehicles will have no problem accessing their destinations by utilizing nearby streets. Further, New Rochelle’s plan to convert Huguenot Street to two-way will provide additional options and accessibility. Additionally, this conversion will allow the City to build a new fire station, a new City Hall and a new school.

The remaining pieces to really get the ball rolling probably include acquiring the land for the new fire station, and then going through the design stages for that.

would be nice to get this going, this roadblock is so annoying

An appeals court has upheld New Rochelle’s right to take 65 River St. by eminent domain, as part of a complicated deal to relocate Fire Station 1 and develop a 28-story apartment building.