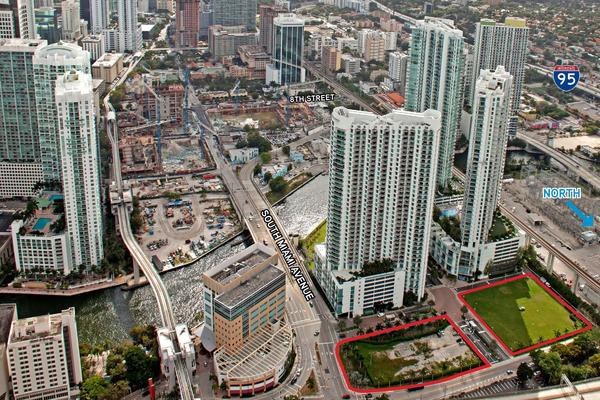 KAR Properties has submitted plans to the FAA to build a 928-foot tower on the Miami River, according to records obtained by TNM.

If approved, the tower would reach a height of 933 feet above sea level, making it taller than any other building that currently exists in Miami (although several towers are planned that would break the 1000-foot mark.)

A 605-foot condo project called Cima was once part of a MUSP approved for the site in 2004, known as the Riverfront Parcel. Two condo towers known as Ivy and Wind were built, but the rest of the land remains vacant.

KAR bought the Cima property in 2013 for $27 million. In total, KAR has spent about $60 million assembling the rest of the property in the Riverfront Parcel over the past year, including land that isn’t on the river.

(Red Marker near the river: Requires Zoom to see)

Relevant Projects as a comparison:

A new condo project located on the former Cima site on the Miami River will soon be announced.

Persian-American developer Shahab Karmely told TRD that he will unveil the project this spring. It will be designed by a renowned architect, with ‘amenitized living and lifestyle features.’ Extra care is being taken on details such as soundproofing, light exposure, ceiling height and elevator experience.

The tower would rise to a height of 928-feet, according to an application submitted to the FAA last month. Construction could begin by late 2015 or early 2016.

Karmely is also moving forward with plans to develop a site in Hallandale Beach.

Although he recently added a property in Wynwood to his holdings, Karmely won’t be developing it immediately. Instead, he intends to take his time, expand his holdings, and eventually develop a mixed-use project.

Karmely arrived in the U.S. from Iran in 1978 as a refugee. He intends to relocate to Miami with his family.

River Village To Be Built In Three Phases, With Rafael Viñoly Designing The First 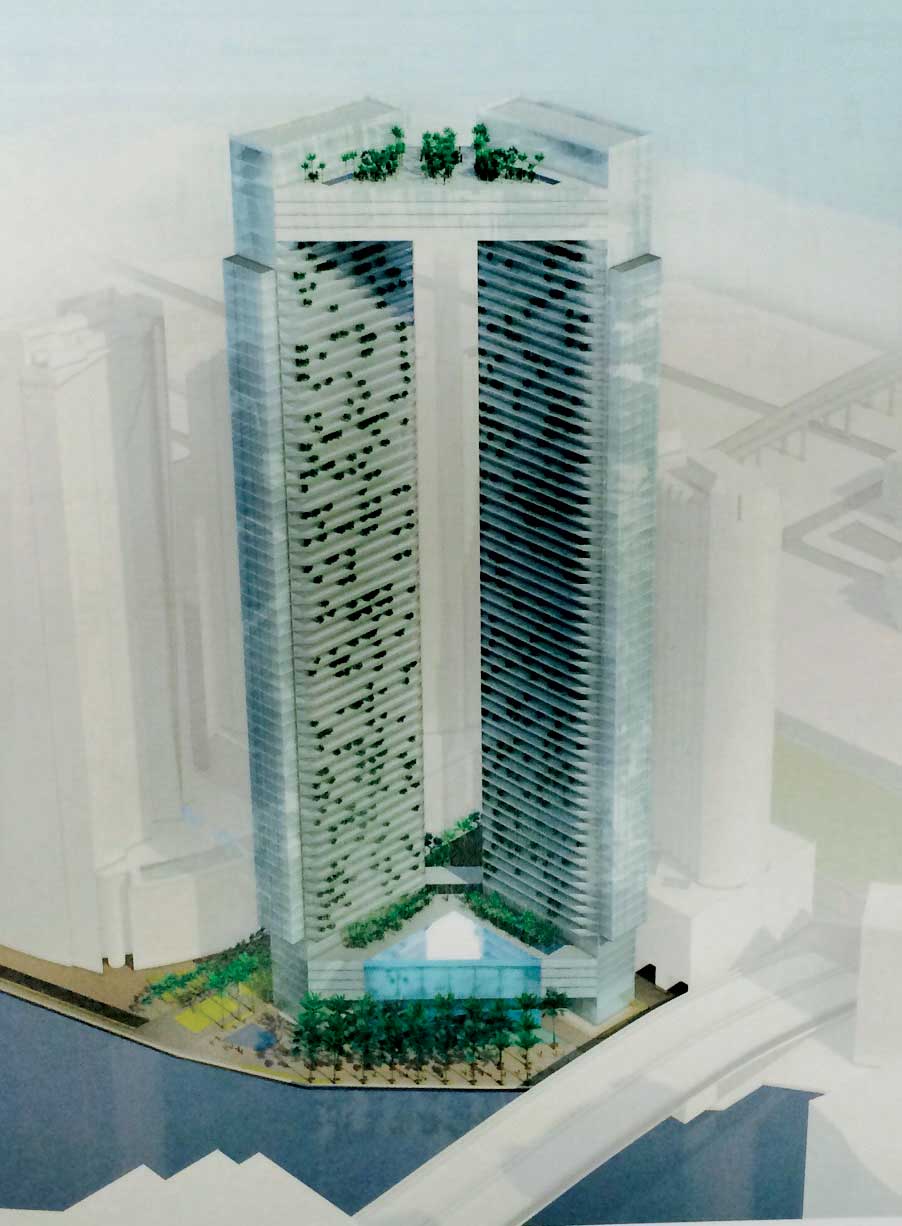 Rafael Viñoly is the architect designing the ultra-luxury 60-story condo tower in downtown Miami that was revealed last week.

The tower is being built by KAR Properties as part of Miami River Village, a three-tower project planned next to the Ivy, Wind and Mint condos on the Miami River. According to company documents, the five acre property is zoned for up to 4 million square feet.

At 60-stories, the first tower will include 1 million square feet, of which about 600,000 square feet will be sellable. High-end retail, restaurants, and ‘interactive components’ will also be built as part of the first phase.

Phase 2 of the project calls for a 50-story tower with a 150-room boutique business oriented hotel, along with 300 branded luxury condos on the upper floors.

In the the third phase of the project, a luxury multi-family apartment tower will be built. The third phase is still in the planning stages.

Viñoly was born in Uruguay and has designed projects throughout the world, including the Tokyo International Forum and 432 Park Avenue in New York. His 20 Fenchurch Street project in London was recently criticized by the Guardian as being ‘bloated, inelegant, and thuggish.’

London-based Gardiner & Theobald has been hired by KAR as the project manager for Miami River Village. The firm has offices in Miami Beach, where they are overseeing construction at Faena District.

KAR is an affiliate of AlphaTerra Partners, an investment firm headquartered in New York. The company is co-managed by Shahab Karmely, who will soon relocate from New York to Miami, and Brian Brille, who is based in Hong Kong. Brille is the former Chairman & President of Bank of America Merrill Lynch Asia Pacific in Hong Kong.

Miami is certainly getting a major skyline, but this is kind of ugly, no?

I think for now this isn’t the final product. While its a working concept, and a serious proposal, it will be tweaked as it goes through the design phase. To be honest, this is way better than some of the bland proposals in Miami. And it gets a lot of them too. Usually in the form of condos that all share a similar white facade with endless balconies and a touch of green.

There are some amazing projects in Sunny Isles going up or planned. Now that area has amazing towers and designs, but theres quite a few that are good for Brickell and the Edgewater neighborhoods.

Panorama Tower will be nice. Currently slated to be the tallest. But other projects will eclipse it in time due. 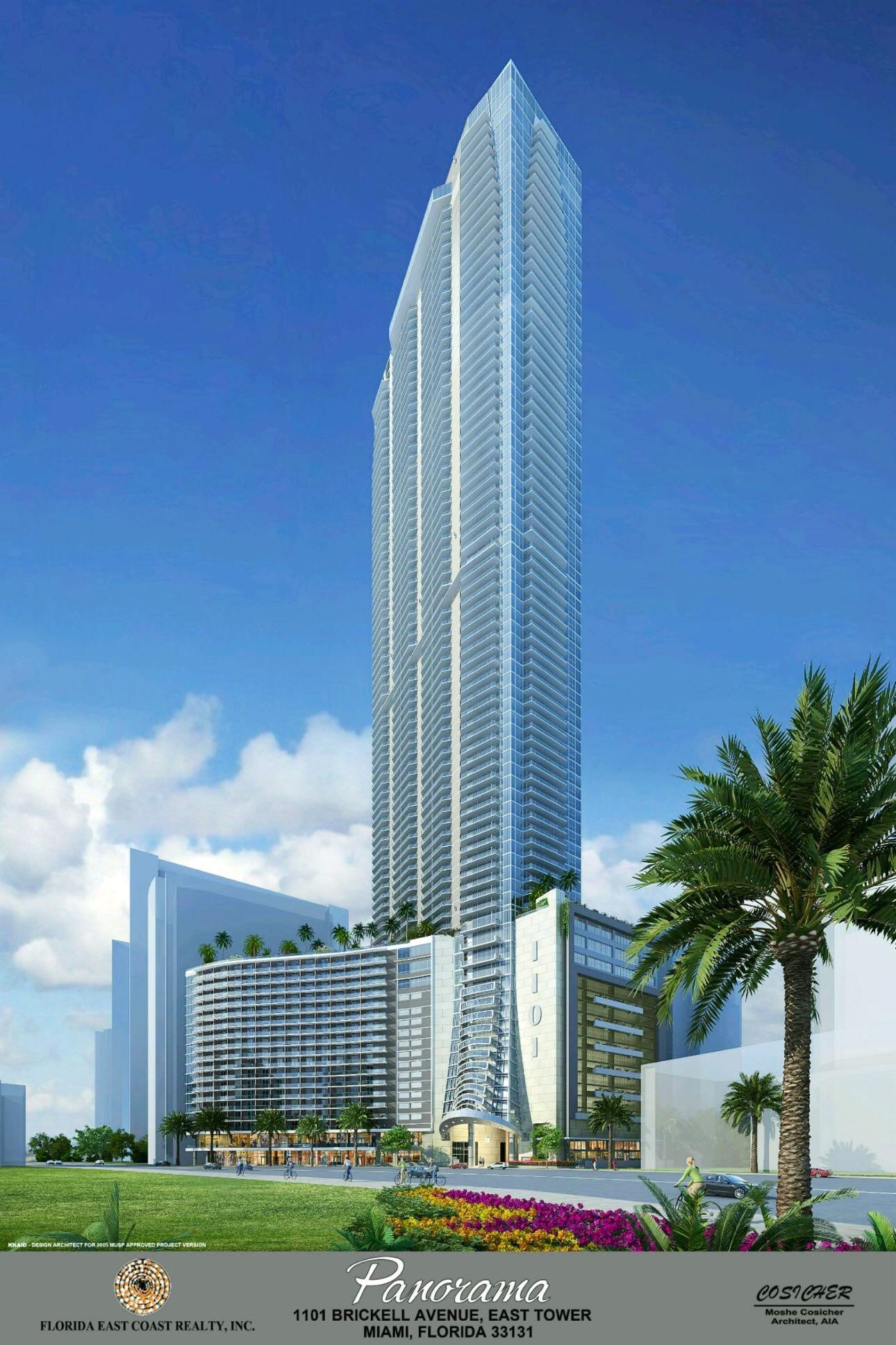 But in terms of 400 S. Miami Ave, I like the idea of the two towers side by side interlocking at the top with a waterfall at the base. Lets keep the fingers crossed that they don’t botch it up. Nice in theory, but sometimes the reality is unsettling.

That one much better! And at the very least, the skyline will be filling out so dramatically that anything too unsightly will likely be hidden in Miami’s newfound concrete jungle. 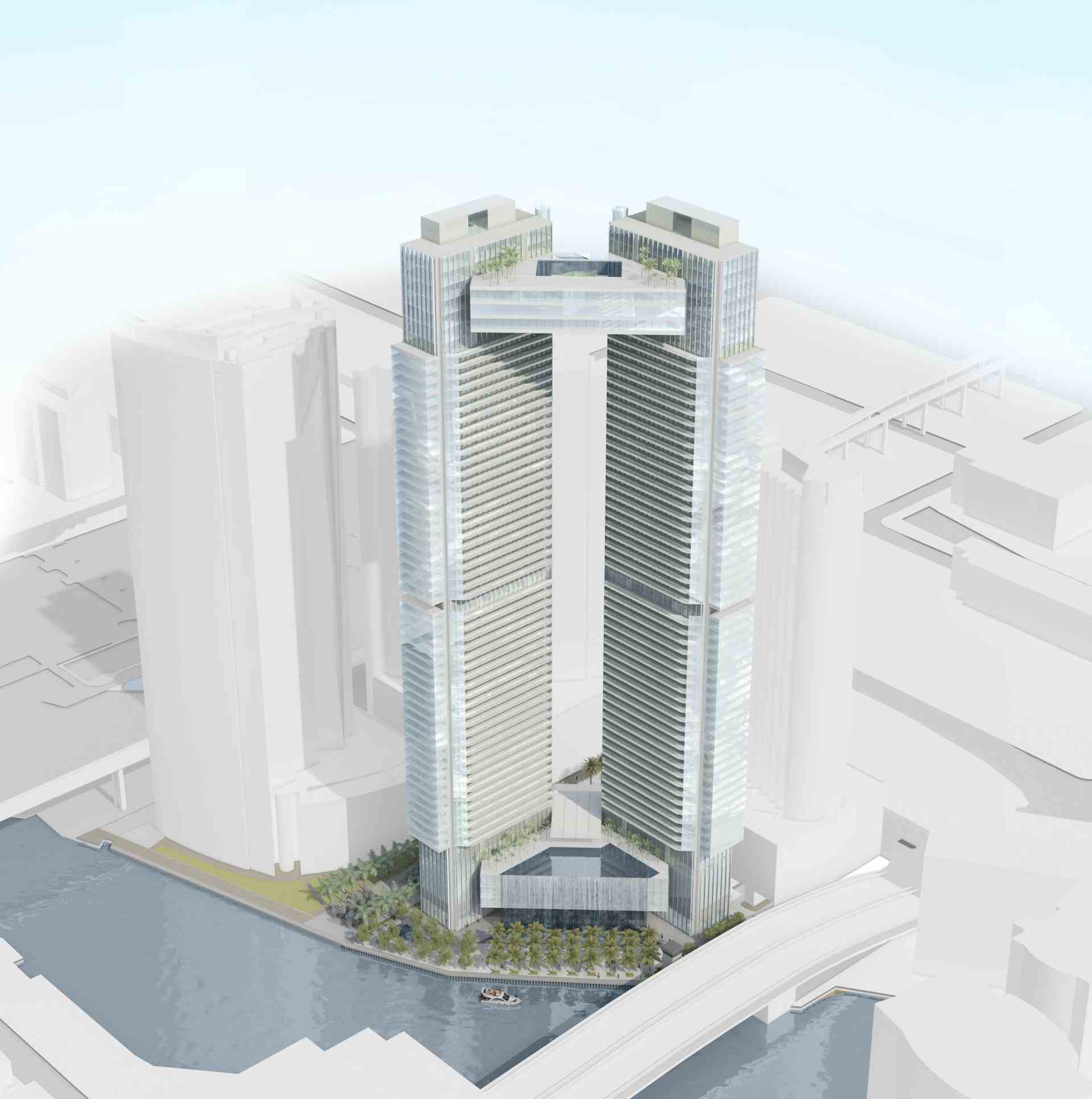 I love the look of this tower, any updates?

It was FAA approved recently. So 2 towers at 928 ft. Will update the title.

Awesome! Seriously love this twin tower with a bridge design. Is there a messaging function on this forum?

Yea for pm just click the avatar of a user, and click message. The forum allows for many things such as full image posting (so no more using flickr or imgur), video posting, and so on. Search feature is a quick way to find projects. Just type in keywords. Also, categories for just focusing on certain cities. 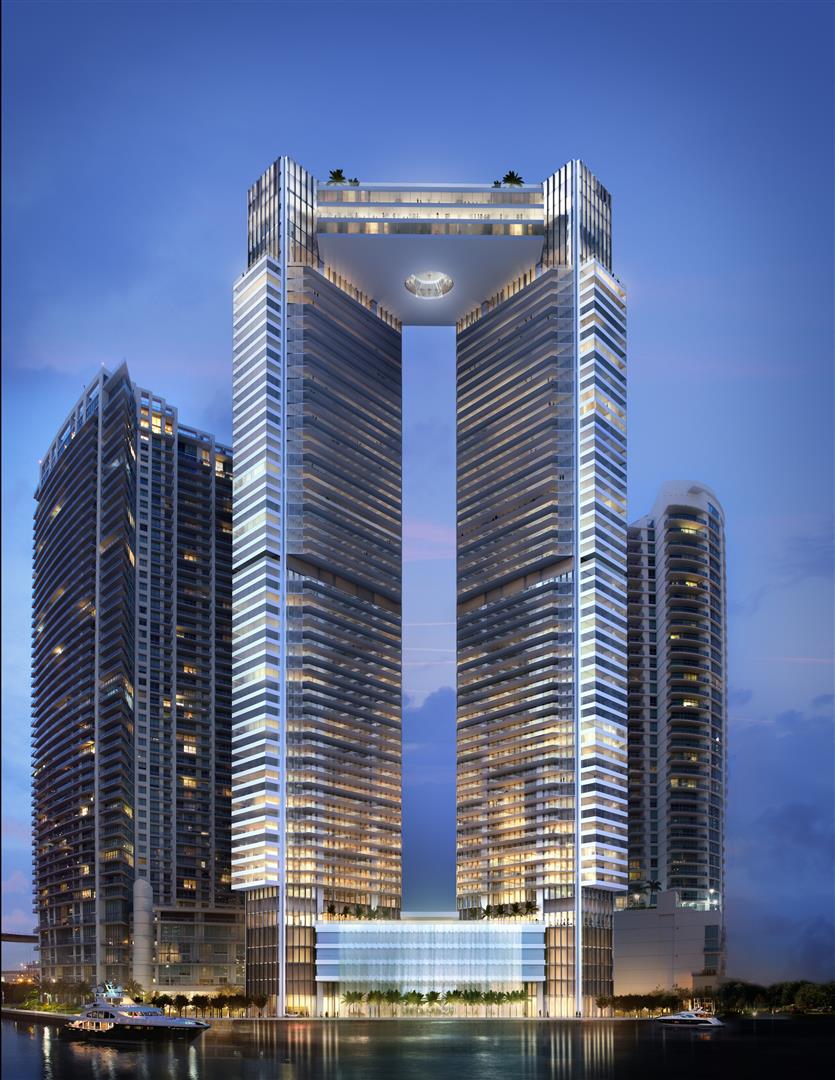 one river point miami by ONE RIVER POINT MIAMI, on Flickr

one river point miami luxury apartments by ONE RIVER POINT MIAMI, on Flickr

one river point miami condos by ONE RIVER POINT MIAMI, on Flickr

one river point miami condominium by ONE RIVER POINT MIAMI, on Flickr

Great for the New York of the South!

Most new buildings in Miami suck, but these look great! I love that huge waterfall at the base too.

One River Point being at the end of the water/river canal. Two tower development with a connecting bridge at the top.

Wow this looks nice! Is that a waterfall at the bottom/atrium of the the two buildings?

This and the Walkie Talkie are the only two nice buildings this misfit Vinoly has ever designed.

Construction About To Begin On Dock Behind One River Point

Activity at the One River Point site is about to get underway.

On December 8, A Notice Of Commencement was filed stating that tree removal would begin. City records show that a permit is active allowing for the removal of 20 trees.

One River Point launched sales in fall 2015, and began converting to contracts earlier this year. A $3.5 million sales center also opened this year.