While the recent focus on Jersey City’s Journal Square neighborhood has centered on KRE’s ‘Journal Squared‘ project, new renderings are up for the long-stalled City Center Towers site, which promises additional changes for the long-neglected area. The images were posted on the website of architectural firm Humphreys & Partners, and the site’s developer is Multi-Employer Property Trust.

Both plans for City Center Towers — via Humphreys & Partners

Luckily, the surge in new development will relegate the Transportation Center to visual irrelevance, as newer urban-friendly projects begin to sprout nearby. City Center — also known as One Journal Square — was initially conceived prior to the recession, but the site has since changed hands; earlier renderings were fuzzy, depicting two high-rises that totaled 1,500 units.

Humphreys & Partners’ latest images of the site depict two possibilities for the design, which may or may not include a sky-bridge that would link the 60-story buildings. City Center Towers will be nearly as prominent as the nearby Journal Squared project; beyond the 1,500 residential units, the development will feature 150,000 square feet of retail at its base, which will help revitalize the street-scape.

Both plans for City Center Towers — via Humphreys & Partners

The scope of City Center Towers appears slightly larger than the initial plans, and the new renderings paint a much clearer picture for the project’s eventual design — assuming they actually come to fruition. The site has been fraught with controversy, after initial deadlines for ground-breaking were ignored; the recession was chiefly to blame, as most development came to a halt across the Hudson River.

No completion date has been announced, but with demolition of the site’s former buildings now complete — and pressure from local officials to proceed continuing to mount — activity is likely imminent. 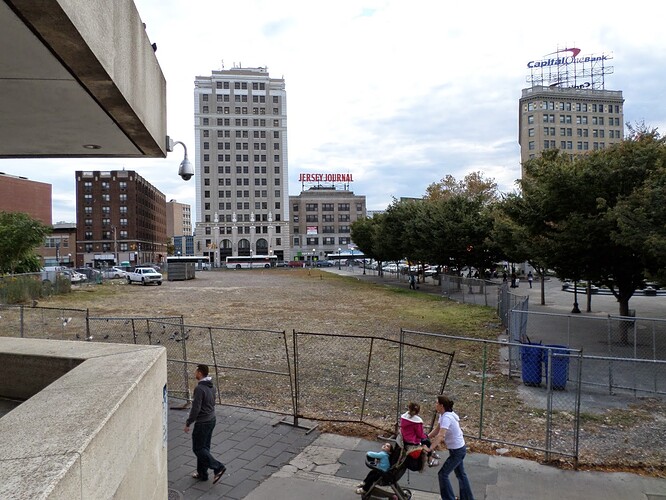 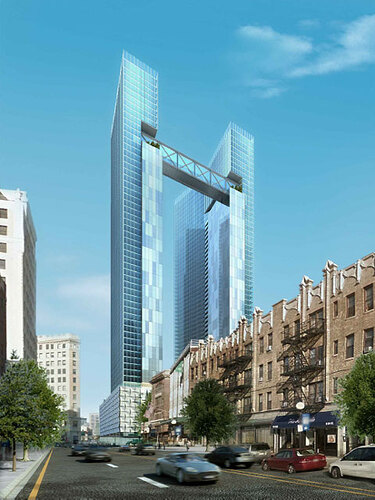 Jared Kushner’s Kushner Companies, in partnership with the KABR Group, paid $27 million for a vacant Jersey City site just across the street from the firm’s planned 40-story residential tower. The two-acre site at One Journal Square was at the center of a long-delayed plan to construct two 60-story towers holding 1,500 rental units and 150,000 square feet of retail space. Kushner said in a statement that he will soon unveil plans for the site that “will help drive the city’s continued renaissance.” Multi-Employer Property Trust and Washington, D.C.-based real estate firm Landon Butler were developing the One Journal Square buildings, once expected to be called the City Centre Towers. Plans were repeatedly delayed after the Hotel on the Square was demolished in 2009. Kushner and KABR are also jointly developing the tower at 30 Journal Square, the former home of the Jersey Journal, and a 50-story residential tower at 65 Bay Street in downtown Jersey City.

According to CIA, over at ssp: 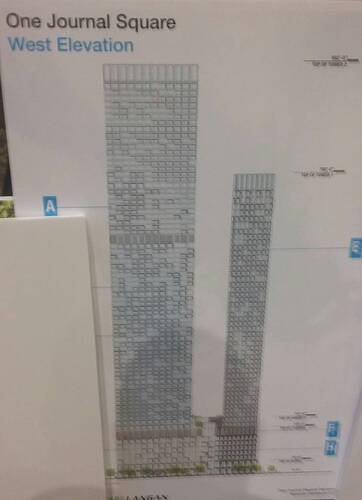 With Journal Square’s elevation advantage, I believe that should make this more prominent than 99 Hudson Street on the waterfront…! So while not quite the tallest in NJ, it will appear as such.

Wouldn’t the 892-footer be the tallest in New Jersey?

Journal Square currently has a mini-432 Park Avenue that can be seen from miles around.

Good point. Journal sq is over 100 ft higher than downtown. This will look huge! First phase of journalsquared already looks huge from downtown and it is only ~500 ft.

Yeah that first phase of journal squared is so similar to 432, but worse. I like 432 but am not really liking journal squared so far (hoping when they are complete they will be better as a cluster). I think 99 hudson will still be a taller building though since it should still be 900+ft.

I see. Actually, it looks like that 900 foot tower in Hudson Street is now under construction. This is fairly close, but if Journal Sq is 100 ft higher than ‘downtown’ ( I assume downtown means the area around the waterfront), then this tower will be somewhat more prominent.

Besides the mini-432 Park already complete, two more are planned next door to there of even greater heights.

Then you have this project, which makes for five+ buildings of 575’+. There are 2-3 additional ~40-story projects also planned in JSquare.

Downtown JC has the GS Tower standing nearly 800’ currently. URL will clock in with three towers of a similar height, and 99 Hudson will stand 100’ taller.

But it seems clear that Journal Square will soon be running neck and neck with JC for “tallest” core west of the Hudson.

This was also approved tonight. This and “30 Journal Square”.

Also one of those 40 fl proposals in journal square ( the jersey journal building redevelopment) just got a boost(1-2 months ago?) and could potentially be 70-80 fl now and possibly even a new tallest for nj. Would be directly across the st from these 2 towers and across the jsq station from the 3 tower journal squared project. This whole are is going to be insanely dense someday. But they are moving pretty slow with all of these projects it seems.

Yeah its u/c. I was there a couple of weeks ago and they had huge piling machines. Sounded like drums all day.

Looks great. I hope the latest news for this and jersey journal mean that they start excavation soon. These proposals have been around for a long time with nothing happening at each site for years. The immediate area around journal square path station is perfect for lots of new development. It is so close to downtown nyc and newark.