Note: This project did start construction, but due to the recession, it is on hold. Currently, there is an ongoing court case (bankruptcy) that is still on going. The developer continues to pursue the project. Ultimately, time will tell when this happens or if it does in the first place.

Information on the dilemma and state of the project:

Though construction began in 2007, today the Chicago Spire exists in a state of limbo. Many consider it a dead project. A few believe it could still be completed. It’s more likely that this project will be resurrected in a smaller, less ambitious form. After all, the foundation has already been built, and this is one of the few remaining pieces of land along the city’s lakefront that can be developed.

The Spire was originally proposed as The Fordham Spire. It was going to be the first Windy City project for Spanish architectural superstar Santiago Calatrava. Though he has graced the shores of Lake Michigan before with the Quadricci Pavilion up the road at the Milwaukee Art Museum, having a showcase project in Chicago is a much better feather to have in one’s architectural cap.

The Spire’s position at the point where the Chicago River drains Lake Michigan would have put it in the center of the city skyline, and made it an unmissable focal point in the thousands of photographs taken by tourists each day.

In its original form, this building lived up to its name. It was truly is a spire – A svelte, tapering form topped by a needle. It was later revised, and the final design eliminated the needle piercing the sky. The entire shaft evolved into a more blunt, yet refined, form.

In a New York Times article about the building, it was compared to a drill bit, a blade of grass, and a tall twisting tree. Others have compared it to a lighthouse, a zucchini, and even an exclamation point.

The inability to quickly categorize the shape is exactly what the architecture world has come to expect from a Calatrava design. It is both geometric and organic. It takes a simple form and twists it in the wind like so many of his other bridges and buildings. In this case, quite intentionally. Though the architect held and stroked a snail shell through many of the design meetings he had in Chicago, Calatrava has stated that the intent of the twisting and rising form was to pay homage to the American Indians, by echoing the smoke from their campfires along the edge of Lake Michigan.

Each of the building’s floors were designed to be anchored to a central column. But each would also be offset from the one below. With each progressive level, the result would have been, indeed, something very much like a drill bit.

The original plan called for the bottom 20 floors to be occupied by a hotel, while the rest of the building was to be filled with 1,200 luxury condominiums. The final configuration eliminated the commercial aspect, and resulted in an entirely residential building. That was a great disappointment to those who believe Chicago needs another sky-high observation deck.

Before economic troubles finally sank this project, its biggest obstacle was zoning. The parcel of land selected was only zoned for as 540-foot-tall building and a 350-foot-tall building. The developer managed to assuage the city, neighborhood groups, and local open space activists by developing a riverfront plaza with six stories of parking underneath. The developer also promised to pony up nine million dollars to turn a disused chunk of lakefront land into DuSable Park.

New York-based Stonebeck Capital LLC sent a commitment letter to provide a loan to the Irish developer’s venture partner so it can pay off the Spire’s creditors this month and exit Chapter 11, according to the partner, Steven Ivankovich of Chicago-based Atlas Apartment Holdings LLC. The commitment letter and funding source was revealed at a confirmation hearing this morning for the Spire’s bankruptcy plan, which a judge approved.

“It’s a juicy deal for us,” Mr. Ivankovich said after hearing. “It depends on what the appraiser says next week.”

Under the recently approved plan, a Kelleher venture has until Oct. 31 to pay its largest creditor, Chicago developer Related Midwest LLC, more than $109 million to keep the development site at 400 N. Lake Shore Drive. The venture can extend payment to March 31 by paying a $22 million fee and increasing the creditor claim to $114 million. Mr. Kelleher teamed up with Atlas to secure the financing.

A Related spokeswoman and Mr. Kelleher declined to comment. Stonebeck executives did not immediately return a message.

The Stonebeck commitment is still tentative pending a site appraisal and other due diligence, and terms of the proposed loan were not disclosed. Still, Mr. Ivankovich estimated there’s a “better than 50/50” chance the deal closes this month. He said the Stonebeck funding would simply allow the venture to exit bankruptcy and not fund construction of the Spire.

The unbuilt Spire project, which would have been 150 stories tall, landed in Bankruptcy Court last year after Related acquired a delinquent $96.5 million loan on the property and filed an involuntary Chapter 11 petition. The amount Related paid for the delinquent loan was redacted in court documents. Related does not plan to build the Spire if Mr. Kelleher doesn’t pay it back, allowing it to take possession of the property.

Kelleher plan to build 150-storey Chicago tower back on track 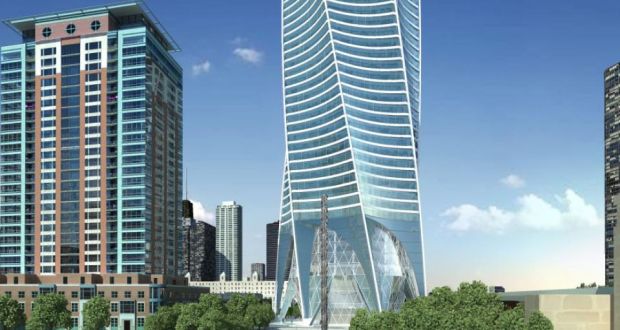 Irish developer Garrett Kelleher’s ambitious dream to build the Chicago Spire, a 150-storey apartment tower is back on track after a bankruptcy reorganisation plan was approved this week.

Judge Janet Baer signed off on the plan at a hearing at the US Bankruptcy Court in Chicago. It will see a new investment partner back Mr Kelleher in paying off his creditors, allowing him to begin work on completing the unfinished project.

Say goodbye to the Chicago Spire?

Chicago Spire developer Garrett Kelleher and his venture partner appeared unlikely to make a required payment due Friday, based on an email his lawyer sent city officials Friday morning.

This would pave the way for Related Midwest to gain control of the city’s most famous plot of dirt.

“Today is the deadline set by the U.S. Bankruptcy Court for Garrett Kelleher and Steve Ivankovich to deposit funds to pay off creditors and bring the Chicago Spire out of bankruptcy,” attorney Thomas Murphy wrote in the email, a copy of which was obtained by the Chicago Tribune. “Any bridge loan does not seem likely at this point and without an extension, equally unlikely, the property will revert to Related who bought the first mortgage from the Irish government. All creditors will be paid on an agreed schedule. As always it was great to work with you on this effort.”

In an interview, Murphy said, “Garrett is deeply disappointed. He passionately believed in the project. While we are open to whatever possibilities exist at this, the 11th hour, we will be extremely disappointed.” Large Hole From Failed Chicago Spire Project To Be Hidden With Dirt - The...

Related Midwest, owner of the 2.2-acre Spire construction site and its unsightly pit since 2014, is now piling dirt around the hundred-foot wide hole to partial block it from view, the Tribune reports. In a letter sent from Related Midwest VP Nick Anderson to neighbors, the company informed them that they plan to build a berm and plant trees to offer “a natural visual screen” between them and the abyss.

Doesn’t look too good, it may just be a temporary solution, but for how long? I mean planting trees? It appears as though Related don’t have anything planned for a while…

Hopefully something glorious will rise here! 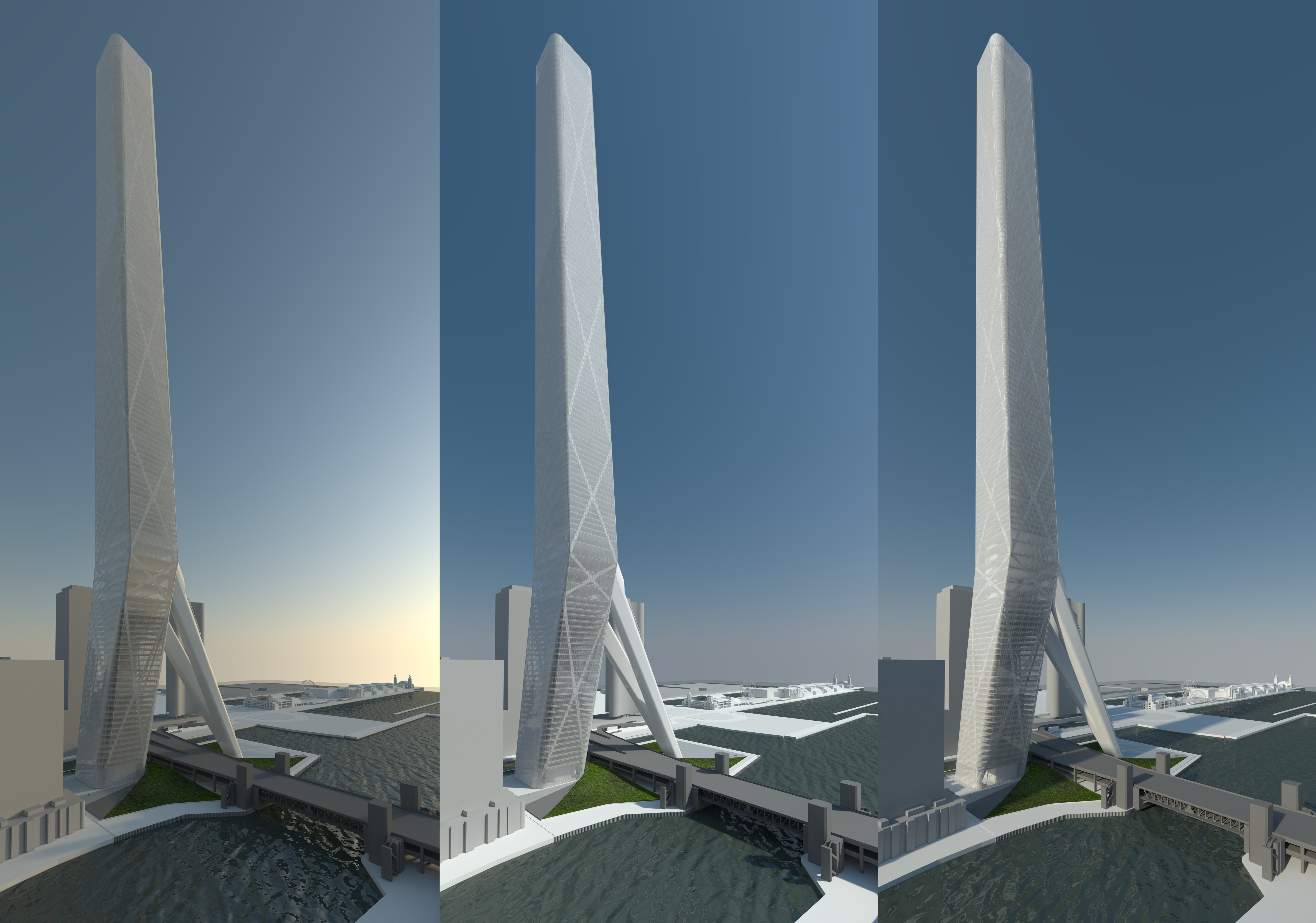 Though specific plans to develop the site of the failed Chicago Spire remain a mystery, designers at the architectural firm Gensler have imagined the high-profile waterfront location as an iconic, mixed-use, mega-tall attraction. Taking top honors in an internal company-wide competition, the concept is known as Gateway Tower. Retaining the same 2000-foot height as the original Spire design, the Gensler concept trades the twisting whimsicality of Calatrava’s narwhal tusk for more of a Chicago-style aesthetic expressed through structural X-bracing.

The aim of the design was not just to pen a very tall tower, but to explore the untapped mixed-use possibilities of the prominent site. Gensler Principal and Chicago office Design Director Brian Vitale explains, “Our solution was to create an anti-tower, one that was not designed purely as an object to look at but rather one that is engaging at different scales to the entire city, one that would welcome newcomers as it simultaneously embraces locals.”

I like this design far more than the original. Now if only we can get it built in New York instead 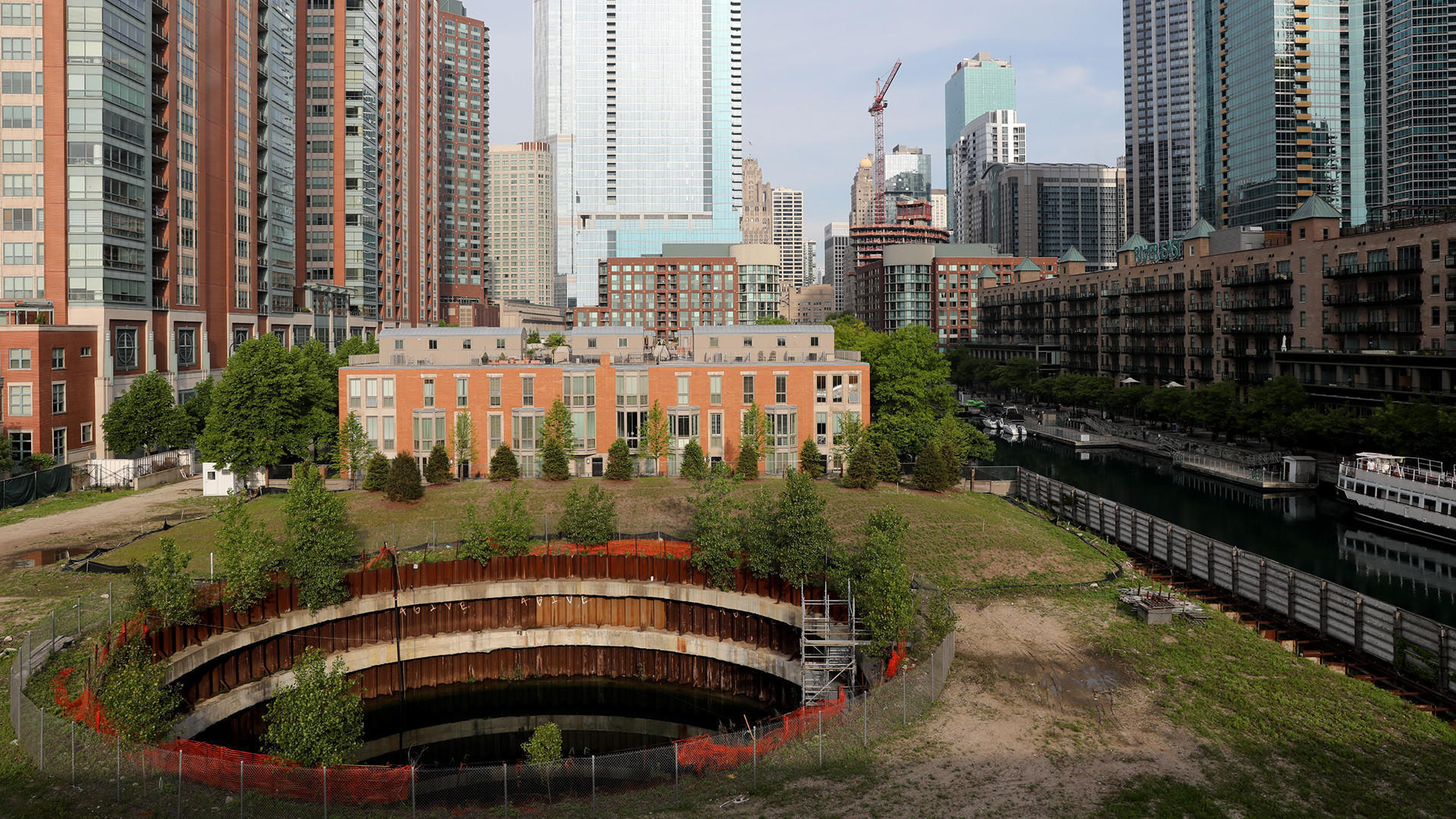 The architect of New York's One World Trade Center has designed a pair of towers to be built at the dormant Chicago Spire site, the Chicago Tribune has learned. Plans include 1,000-foot-tall tower and an 850-foot tower next to it that will include...

No!!!..come on I don’t get it why to make this two towers for? So ugly idea. It so sad that who decided don’t make Chicago spire 150 storey tower? I mean I want prefer Chicago Spire perfect shape tower twist with silver base and plaza look like wtc plaza. 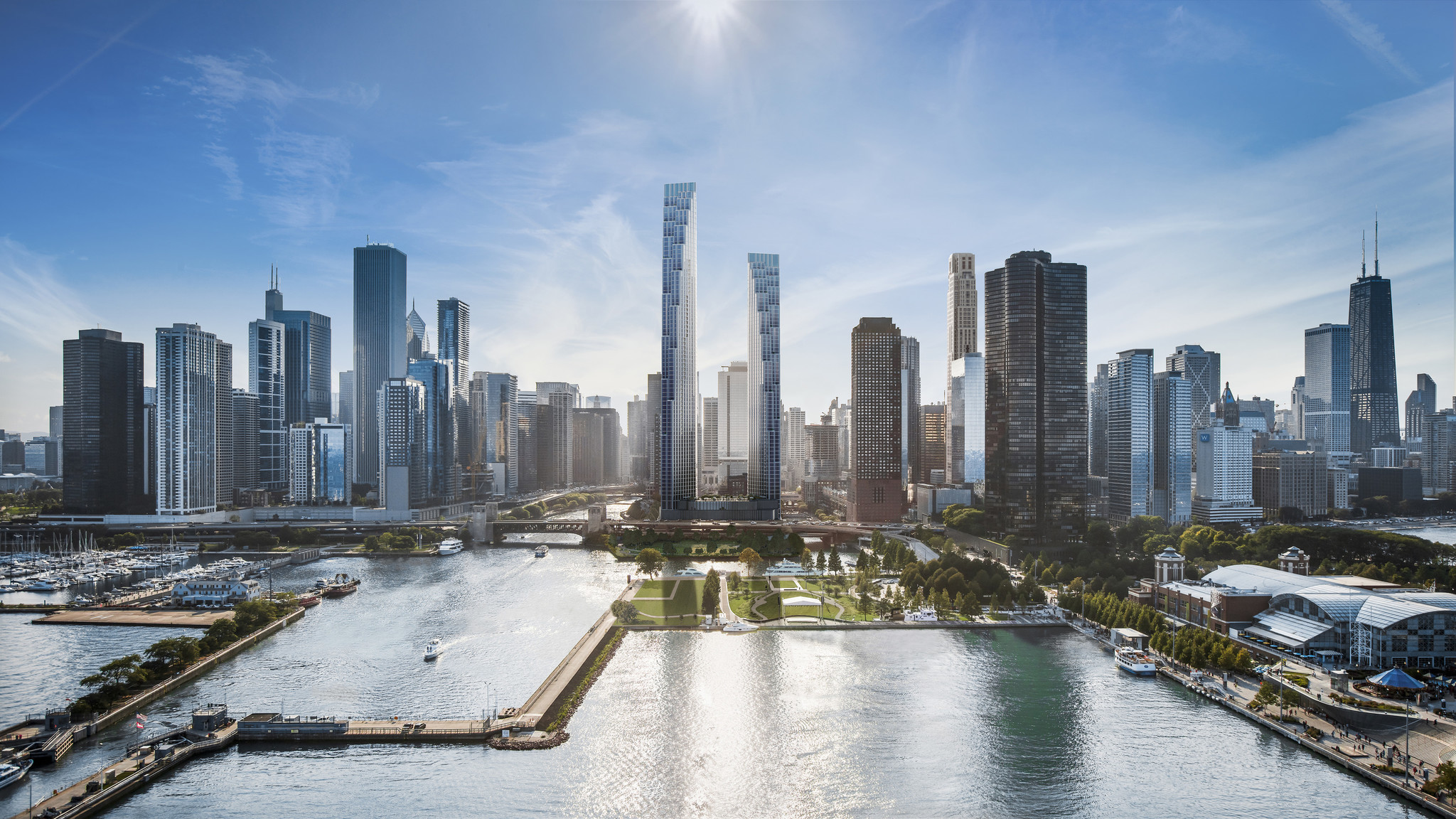 Chicago is about to blow NYC out of the water!!!

a shame they’re not twins. With that design, the symmetry would be amazing. 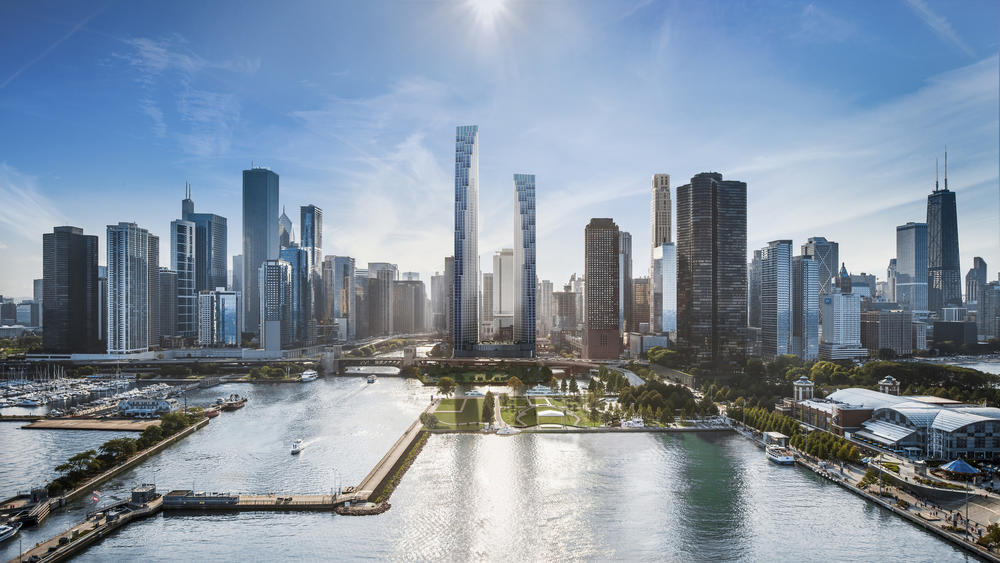 This is my favorite rendering.

Love this render. The details look great. Chicago is on

Would it be wrong of me to suggest these towers have a slight art deco flavor to them? Especially with the setbacks and terra cotta.

looks like the lovechildren of Burj Khalifa and 111 w 57th. The crowns are a bit tacky and the base is borderline brutal, but those towers are great.