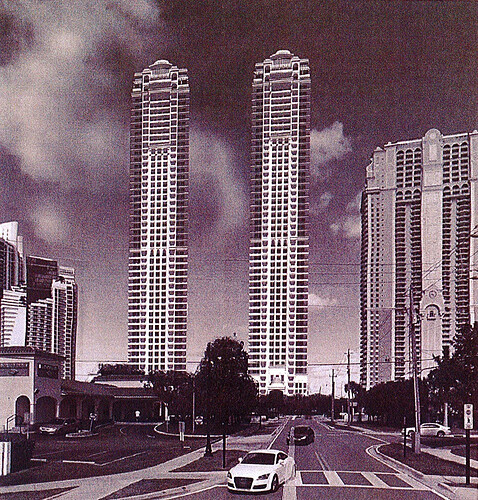 Plans have been submitted by The Trump Group for a twin tower project in Sunny Isles called Palazzo Di Acqualina.

It will be built on the 5.6 acre Golden Strand property at 17901 Collins Avenue, just north of the two existing (one still under construction) Acqualina towers. Trump paid at least $100 million for the property, which was operating as a timeshare. The structures on the property, some of which date back to 1946, will be demolished.

In contrast to other developers in Sunny Isles who brought in world-famous architects, Trump is using local firm Cohen Freedman Encinosa & Associates – the same architect behind the polarizing design for the first two Acqualina buildings. The towers will be painted in colors that include ‘Oklahoma Wheat’ and ‘Roasted Sesame Seed.’

Elevations, floor plans and other details to be uploaded shortly.

That’s the pitch the developers of the Acqualina Resort & Spa are making for two ultra-luxury towers they plan to build near their hotel in exclusive Sunny Isles Beach.

The 5.6 acre, beachfront project — called the Estates at Acqualina — will include 24-hour valet and concierge service, a bowling alley, a movie theater, an ice-skating rink, six pools, a basketball court and a restaurant.

Developer Jules Trump (no relation to the Donald, who has also branded a property in the area) said his goal is to produce “self-contained living with maximum convenience and maximum service.”

It’s generally a second or third home for the people we’re selling to,” Trump said. “They’ve traveled the world and seen everything and when they come down here to South Florida for a few weeks, they don’t want to have to travel or move around.”

Amenities will also include a so-called Wall Street Trader’s Club with a ticker tape for those who miss the trading floor.

“We’re definitely catering to people in finance,” said Michael Goldstein, the project’s director of sales. “A lot of our clients, they want the newest and greatest thing. They have a Ferrari and they drive it for 200 miles and then they upgrade to the next model.”

In addition to the resort, Trump also owns the Mansions at Acqualina, another luxury condo project with a penthouse that listed at $50 million. All three projects are within a two-block radius.

The Estates at Acqualina is one of several ultra-luxury condo projects in Sunny Isles Beach, including the Porsche Design Tower, the Residences by Armani/Casa, the Fendi Chateau Residences and the Ritz-Carlton Residences.

The city (pop. 21,720) is known as an enclave for the wealthy. It has twice the rate of families making more than $200,000 per year compared with Miami-Dade County, according to U.S. Census data.

The new development — 17901 Collins Ave. — is expected to finish construction in 2019. Buyers must put down a 50 percent cash deposit. And investors will not be allowed to buy units and try to flip them. 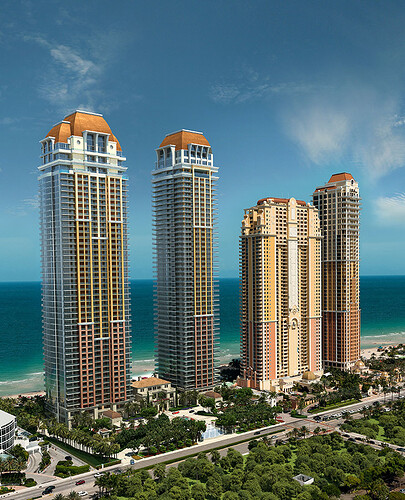 The developer of Estates at Acqualina says that sales have been strong lately, with groundbreaking coming as soon as year end.

Jule Trump told Bisnow on August 12 that 100 of 265 units had been sold. He said that he “heard that others are struggling, but if every week goes like this past week, we’ll have a building in the sky very soon.”

Sales velocity is strong enough that they could reach their target numbers needed for groundbreaking by the end of 2016, or in the first months of 2017, he added.

Buyers are being required to place a 45% deposit at the time of groundbreaking. Prices range from $3.9 million to $48 million.

A $10 million sales gallery for the project was launched last month, and plans for a lobby designed by Karl Lagerfeld were also revealed. 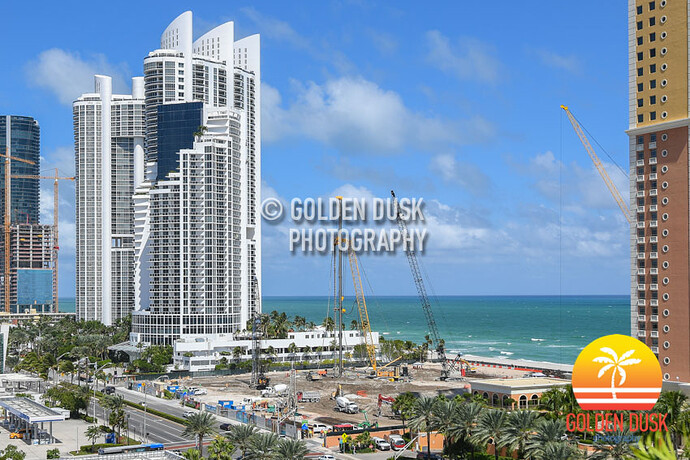 Foundation Work Continues At The Estates at Acqualina In Sunny Isles Beach —...

Foundation work continues at the 649 foot towers The Estates at Acqualina in Sunny Isles Beach. Developed by Trump Group, the towers recently received a $558 million construction loan from Bank OZK. The first tower will have 154 residential...

To the left rising. 2nd phase is also rising as well. 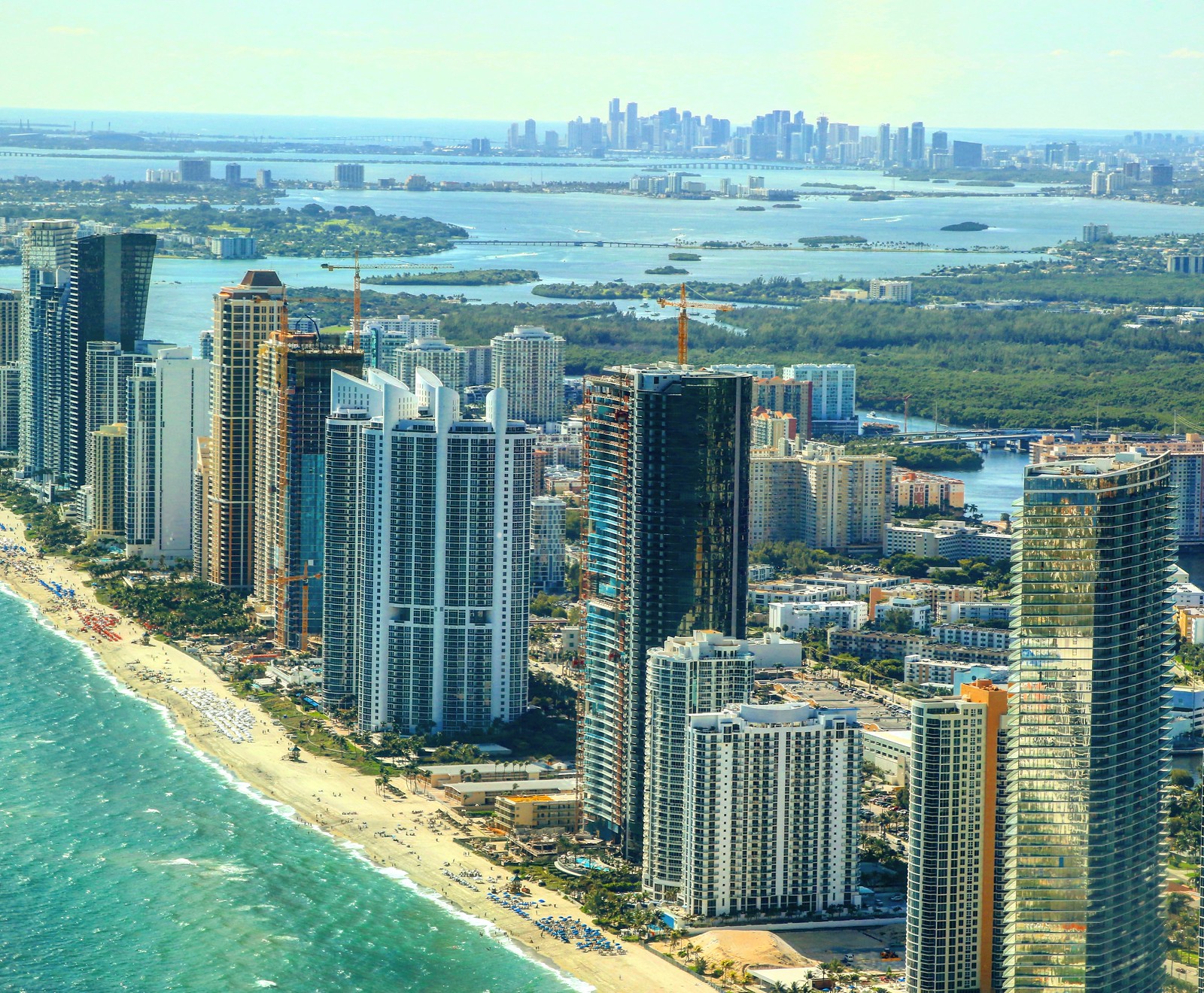 Miami Beach & Miami from the air by Victor, on Flickr 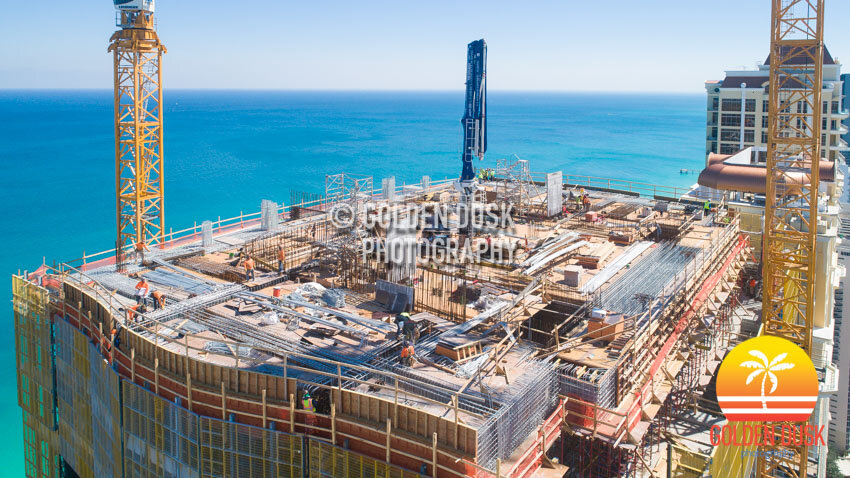 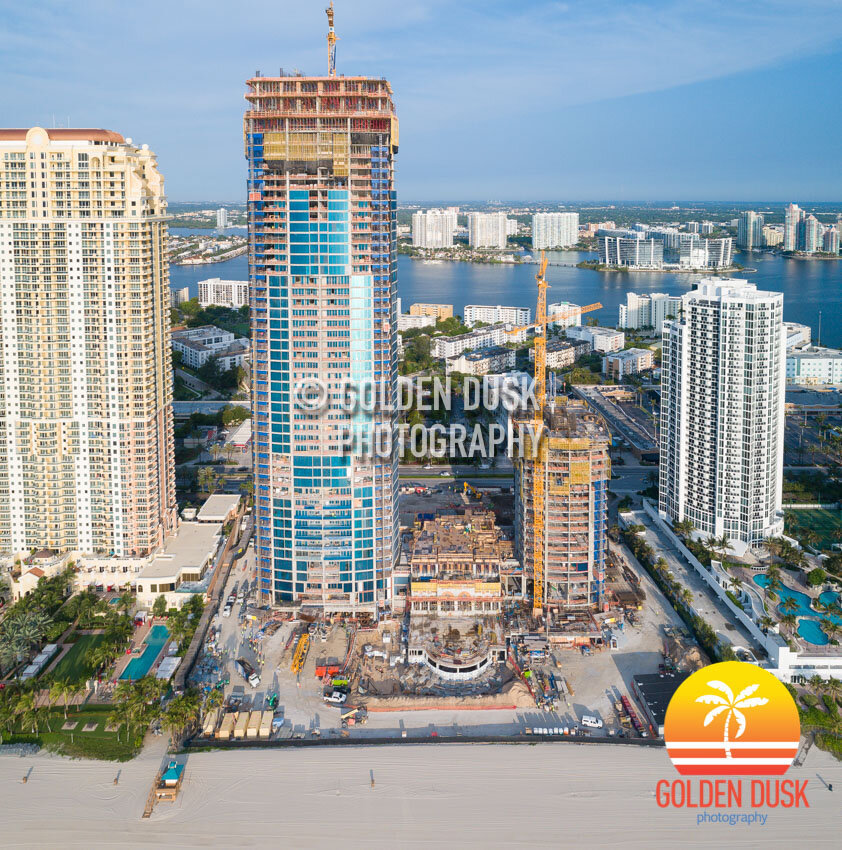 The Estates at Acqualina South Tower Topped Off At 50 Stories — Golden Dusk...

The Estates at Acqualina South Tower has topped off at 50 stories and 646 feet while the North Boutique tower has reached the 23rd floor. A year ago , the South Tower was on the 14th floor and the North Tower was getting ready for the foundation...

I love the big fountains at Acqualina. 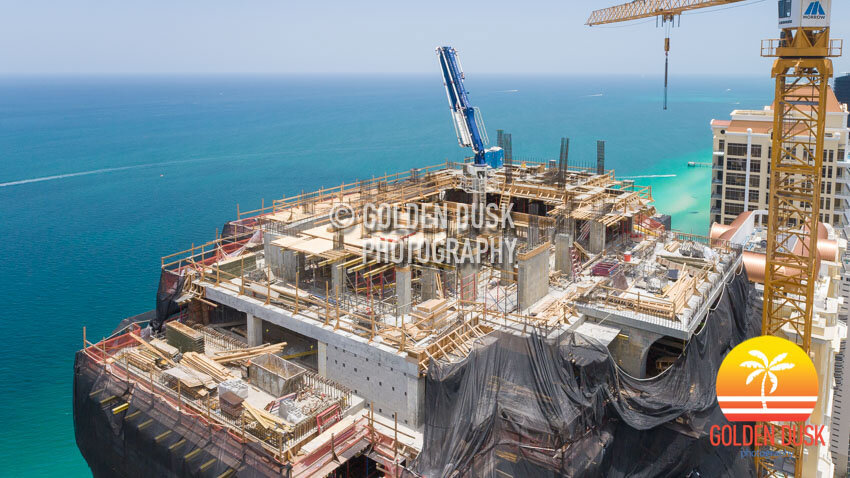 The Estates at Acqualina South Tower had its official topping off on Friday, July 3rd as the building reached 50 stories and 646 feet. The North Tower has reached the 29th floor and will also top off at 50 stories, but will be slightly taller at 667... 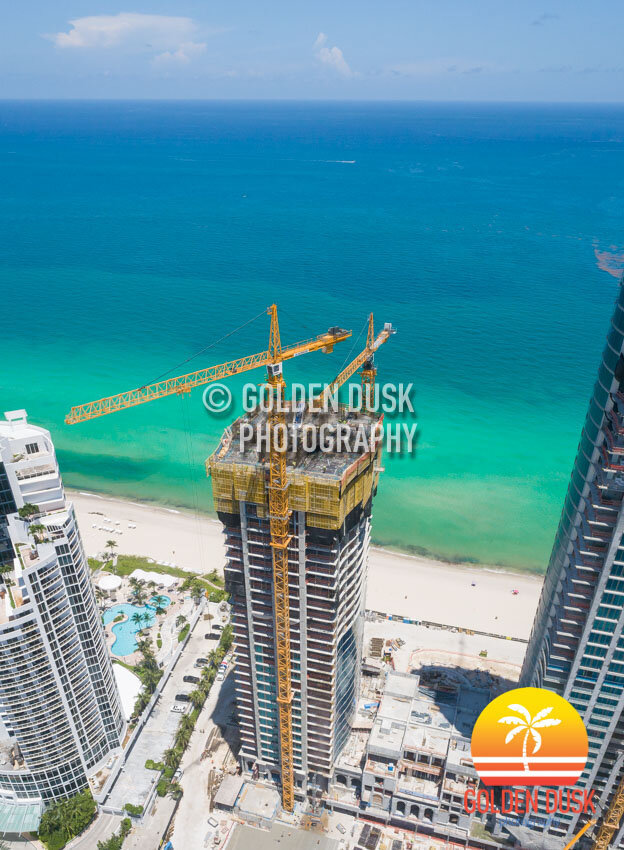 The North Tower at The Estates at Acqualina is rising quickly and should be topped off before the end of the year as construction reaches the 33rd floor. A year ago , the foundation pour was about to start on the tower. The South Tower topped off... 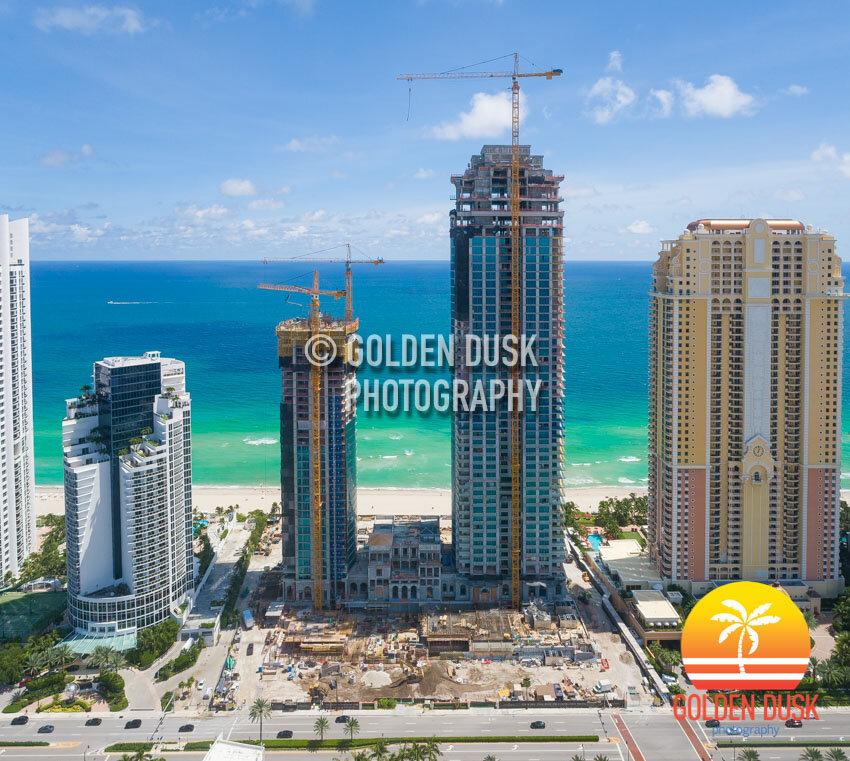 The Estates at Acqualina North Tower has reached the 36th floor of construction before topping out at 50 stories and 667 feet. Construction started going vertical on the North Tower almost a year ago in October 2019 , while the 50 story South... 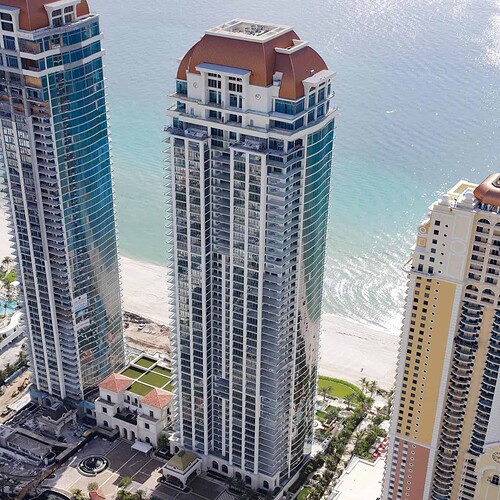