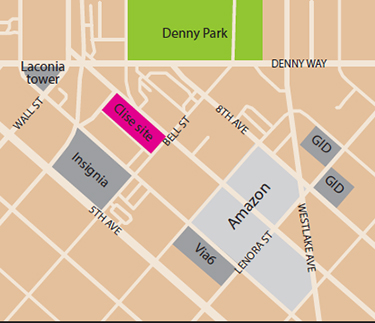 Seattle architecture firm Graphite Design Group is working on the project, which would have 880 parking spaces, according to information from the city.

Zoning allows residential buildings of up to 400 feet on the site under certain circumstances. The property is now occupied by parking, a transmission shop and a car rental “hut.”

The site at 2301 Seventh Ave. is across the alley from Antioch University, and in the Denny Triangle neighborhood where Amazon.com is constructing more than 3 million square feet of office space.

Clise sold Amazon that land, and Amazon has an option with Clise to buy more property nearby.

Since Amazon’s announcement, the neighborhood has seen a wave of new housing development.

Clise has not indicated to the city if the Seventh Avenue project will be apartments or condos, but few condo developments have been proposed locally.

Brian O’Connor, principal with O’Connor Consulting Group, said he would be surprised if it’s not apartments.